Coronavirus in Michigan: Here’s where we stand as of Sunday night

Some relief headed to SE Michigan

DETROIT – Well, we did it (actually, we’ll technically do it tomorrow). Not that it was a surprise…The Local4Casters have been telling you since Monday that we would likely break Detroit’s record for most consecutive days without getting above 20 degrees (-7 degrees Celsius).

Today is day 11 with a high temperature below 20 degrees, which tied the old record, and Saturday will be day 12. I looked back at my historical weather records, checking a few previous bitter cold stretches, and each one had one or more days above 20 degrees. The more I looked, the more I realized just how difficult it is to sustain this kind of cold for nearly two weeks. So someday when you tell your kids or grandkids about this cold wave, you can assure them that the 12 straight days were unprecedented in recorded Detroit weather history. 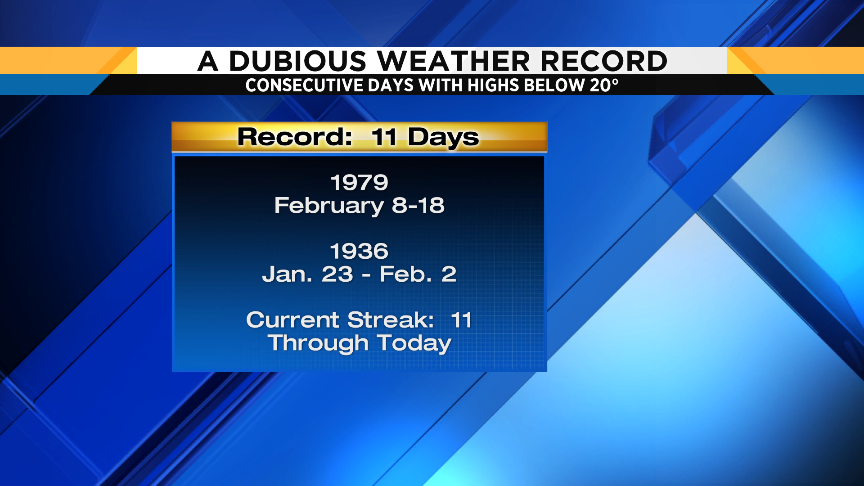 We finally have a nice reprieve from the Arctic air on the way, but we have to get through one more bitter cold day first…

Tonight will feature either mostly clear or partly cloudy skies, depending upon where you are, as some Lake Michigan lake effect clouds may break off and cross the state. Lows should be around -4 degrees (-20 degrees Celsius) in the heart of the metropolitan area, and colder in rural locations.  Fortunately, the wind will be lighter tonight…from the west at 4-8 mph, but that will still generate bitter wind chills. The National Weather Service has issued a Wind Chill Advisory for the entire Local 4 viewing area in anticipation of wind chills that could drop to between -15 and -25 degrees (-26 to -32 degrees Celsius) by dawn.

Mostly sunny on Saturday, with highs only around 10 degrees (-12 degrees Celsius), with wind chills rising to around zero (-18 degrees Celsius) by afternoon. Northwest wind will shift to the southwest by late afternoon, at 5 to 10 mph.

Partly cloudy Saturday night, with one more bitter cold night in store for us: lows dropping to near zero (-18 degrees Celsius).

Becoming cloudy on Sunday with some light snow developing by late afternoon. Highs in the mid 20s (-3 degrees Celsius). 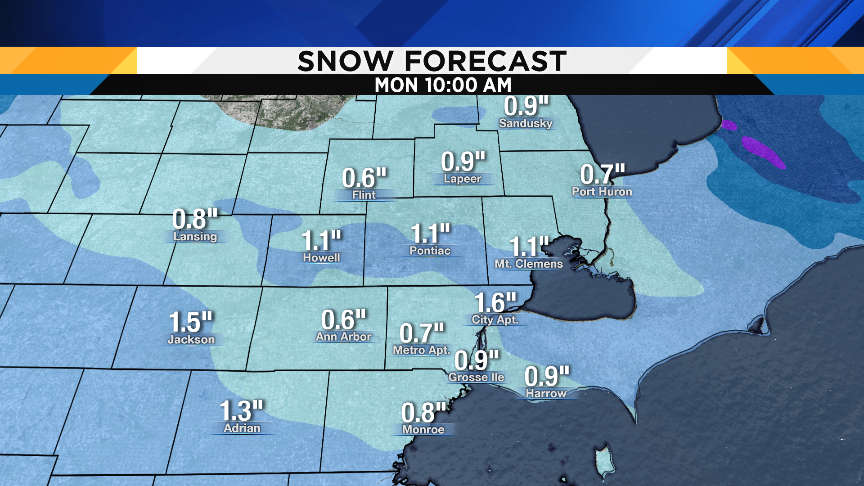 Here are some maps showing you the timing of our weekend snow to help you plan:

Aside from a few snow showers very early in the day, most of Monday should be dry, with highs in the mid 30s (2 degrees Celsius). This will be our first above-freezing temperature since Dec. 23!

Mostly cloudy on Wednesday, with highs soaring into the upper 30s (4 degrees Celsius).

Rain showers…yes, you read this right…rain showers are likely on Thursday, with highs in the low 40s (5-6 degrees Celsius).

A cold front crosses the area Friday with a few lingering rain showers ahead of it, and then temperatures return back below average behind it (but not nearly as bad as our current cold wave).

A word about Global Warming

I have received a few very snide comments from some people recently about this cold wave negating all talk about our planet’s warming climate. Let me make a few very important points here.  First of all, a planet’s average temperature is NOT what is happening in your backyard. There’s a reason I like to call it Global Warming…that’s because you have to look at the temperatures all around the planet.  Take a look at the map below: 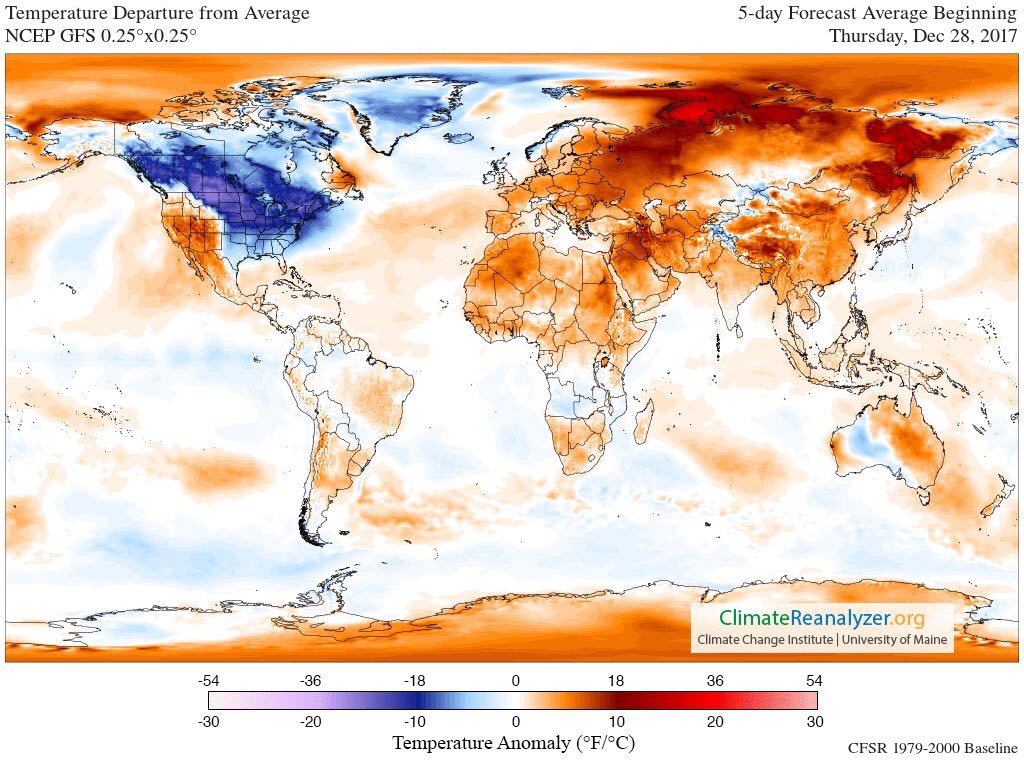 As you can see, there is indeed a well-below average temperature area from western Canada extending down into the eastern two-thirds of the United States. However, look at the rest of the world. Colleagues from many, many nations have been telling me for the past month how warm they are. This is very much like that bitter cold “Polar Vortex” winter a few years ago:  the eastern U.S. was cold, while the rest of the world was warm.  The bottom line is that this cold wave in our part of the world does not mean that the planet as a whole is not warming. It is. And that is scientific fact.

Another point I’d like to make is that a warming world does not mean an end to winter. In fact, as the planet warms, more and more water vapor is evaporating from the oceans into the atmosphere, and storm systems use this atmospheric humidity to create precipitation. This is why there has been a documented increase in high-end precipitation events nationwide. It may shock you to hear that six of Detroit’s all-time top eleven snowiest winters have occurred just since 1981, including our number one snowiest winter in 2013-14. All in a warming world. So, even if winters ON AVERAGE, are getting milder, those winters with favorable storm tracks are capable of dropping more snow on us than in the past.

Finally, how do bitter cold outbreaks like this occur if the planet is warming? There’s actually some recent research (that is still ongoing) to explain this. I’ve explained many times that the jet stream – that band of strongest wind aloft – is the dividing line between colder air to the north and warmer air to the south. The jet stream itself results from that sharp temperature contrast.  But, as was first proposed by climate scientists decades ago, higher latitudes are warming at a faster rate than middle and lower latitudes. As a result, there is less of a temperature contrast, which results in a weaker jet stream, and this increases the chance for those big peaks and dips in the jet that allow for more extreme temperature events…both hot and cold. This research continues, but from a purely physical sense, it’s very logical.

Out of the office

I will be out of the office starting this evening so I can attend the American Meteorological Society’s annual meeting, held in Austin, Texas. It’s going to be a very special meeting for me, as I will be formally named a Fellow of the AMS, a very high professional honor. The word “humble” is overused and used way too casually nowadays, but I am very sincere in saying that it is the most humbling honor I have ever received in my career. It still hasn’t sunk in. While at the conference, I have also been asked to deliver a talk with advice to my colleagues about how they can be successful in adding more science and environmental information to their weather presentations, and also will be on a panel discussing the broadcast meteorologist’s role in communicating space weather information to the public. Throw in all of the meetings I need to be at for the committees I’m on, and I’ll be pretty busy. But not too busy to keep an eye on our weather here at home, and those of you who follow me on Twitter (@PGLocal4) will receive my updates if there’s anything important you need to know. I’ll be back in the office late next week. Have a great weekend!