Wolverines boast No. 1 total defense in country through 6 games

ANN ARBOR, Mich. – Elite defenses have become the norm for the Michigan football program, and that's the case once again midway through the 2018 regular season.

Don Brown is once again at the helm of the No. 1 total defense in the country, as Michigan is allowing just 230.5 yards per game. Five games have come against lesser competition, but the Wolverines have completely shut down the opponents on the schedule in terms of yardage.

Michigan has gotten contributions across the board, including players who are in the regular rotation, but aren't necessarily starters.

Here's a look at the top 10 defensive players from Michigan's first half. 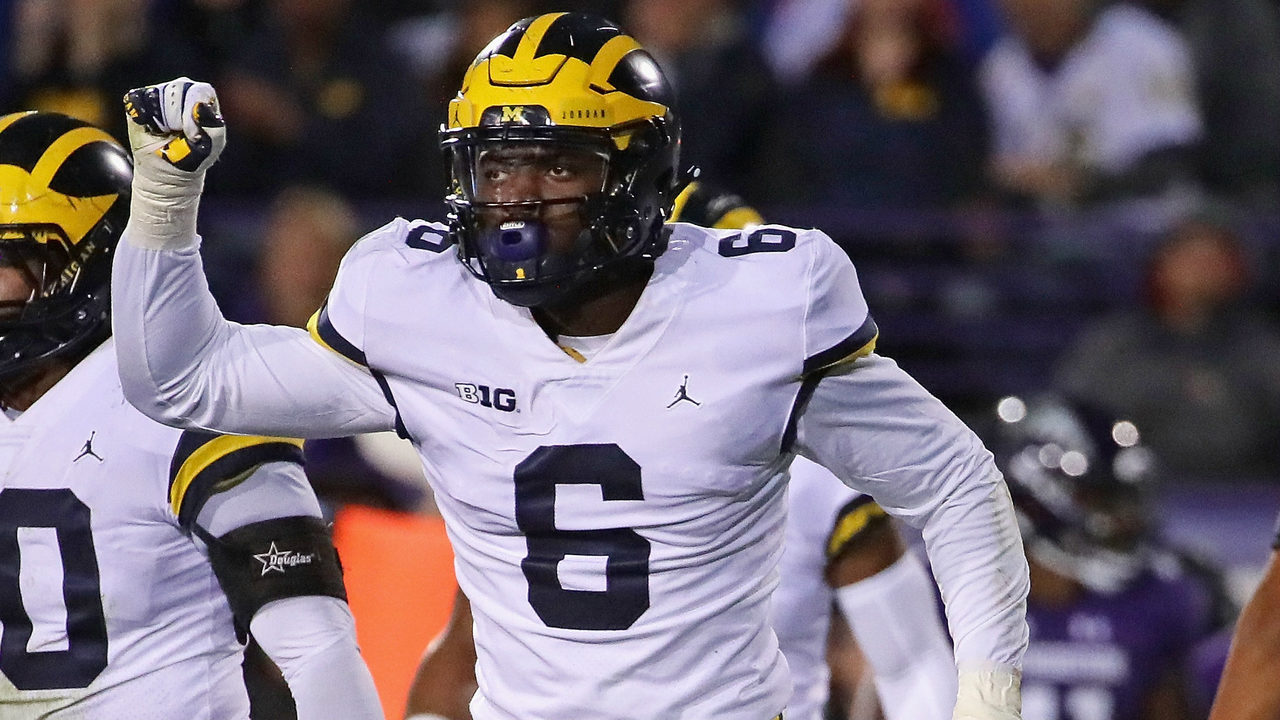 In his first season as a significant member of the defensive rotation, Uche is making the most of his snaps at linebacker.

Uche isn't in the starting lineup, but it's clear that Jim Harbaugh considers him among the best options at the position. That was evident when the junior was on the field for the most critical moments of Michigan's comeback win against Northwestern.

With the season on the line, Uche made a huge sack on third and seven with about 10 minutes left in the game. Michigan got the ball back and scored the eventual winning touchdown. Uche followed up with a sack that ended the game as Northwestern looked to throw a Hail Mary for the win. 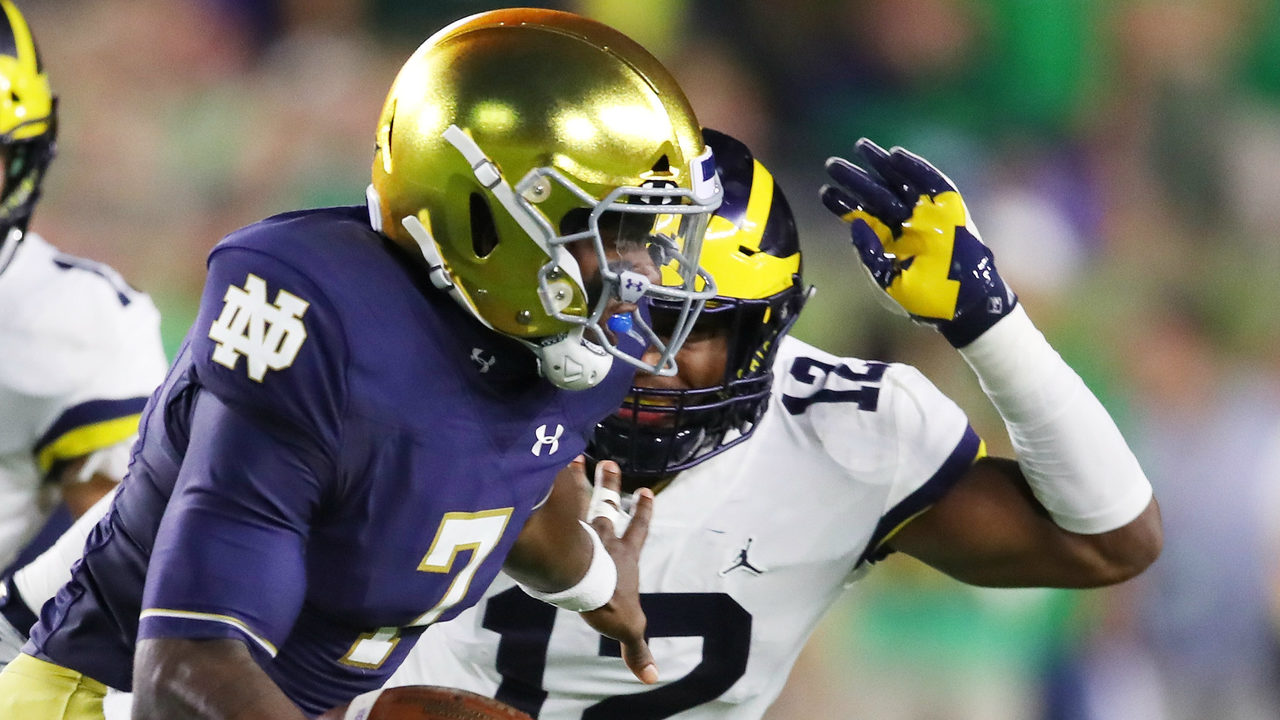 Ross started the season in a bit of a rotation with Devin Gil for the final starting linebacker spot, but the sophomore is now getting the majority of the snaps.

His first full season as a defensive contributor hasn't come without bumps in the road, but Ross has showed why he was a four-star and the No. 9 inside linebacker in the country in 2017. He has good closing speed and has made some big tackles in space. 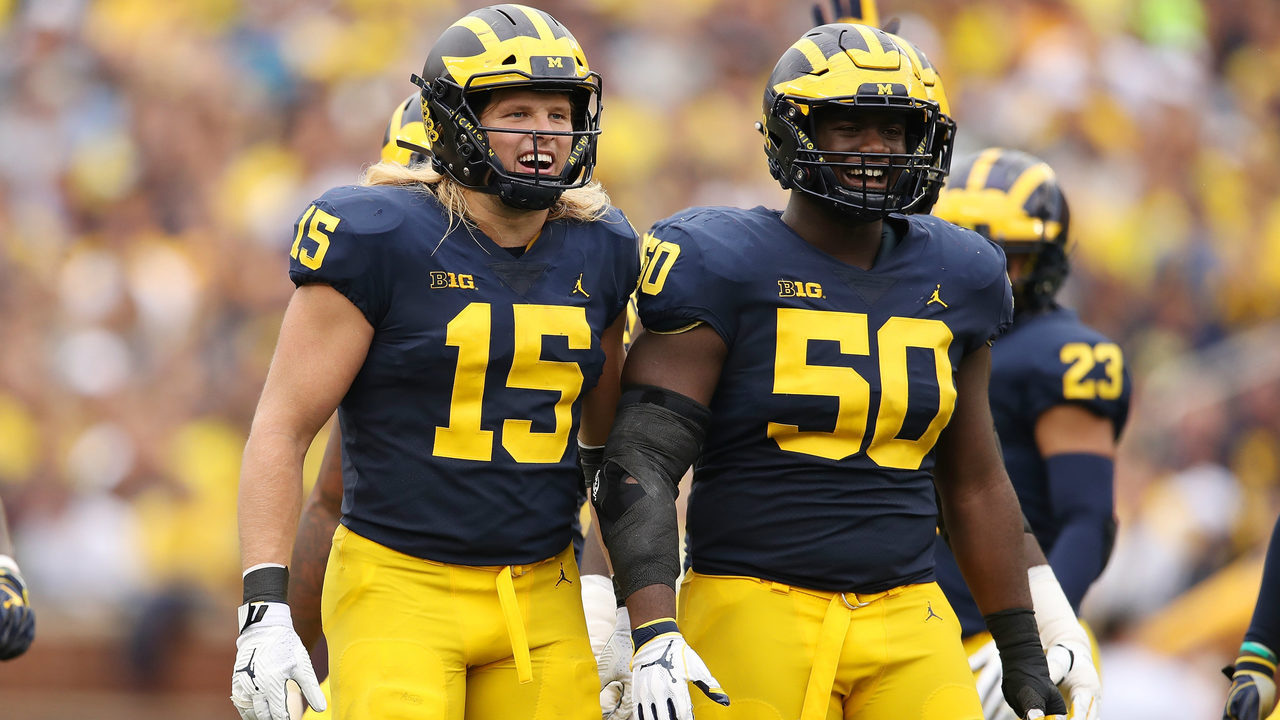 Michigan's dominant victory over Maryland last weekend came at a cost, as Dwumfour was carted off with an apparent leg injury.

The severity of Dwumfour's injury is still unclear, but Michigan really needs him during the upcoming stretch of tough games.

When Maurice Hurst graduated and moved onto the NFL in the off-season, the Wolverines lost their best inside pass rusher. Dwumfour has been one of the few players able to get pressure from the interior defensive line, picking up a sack in each of the last two games. 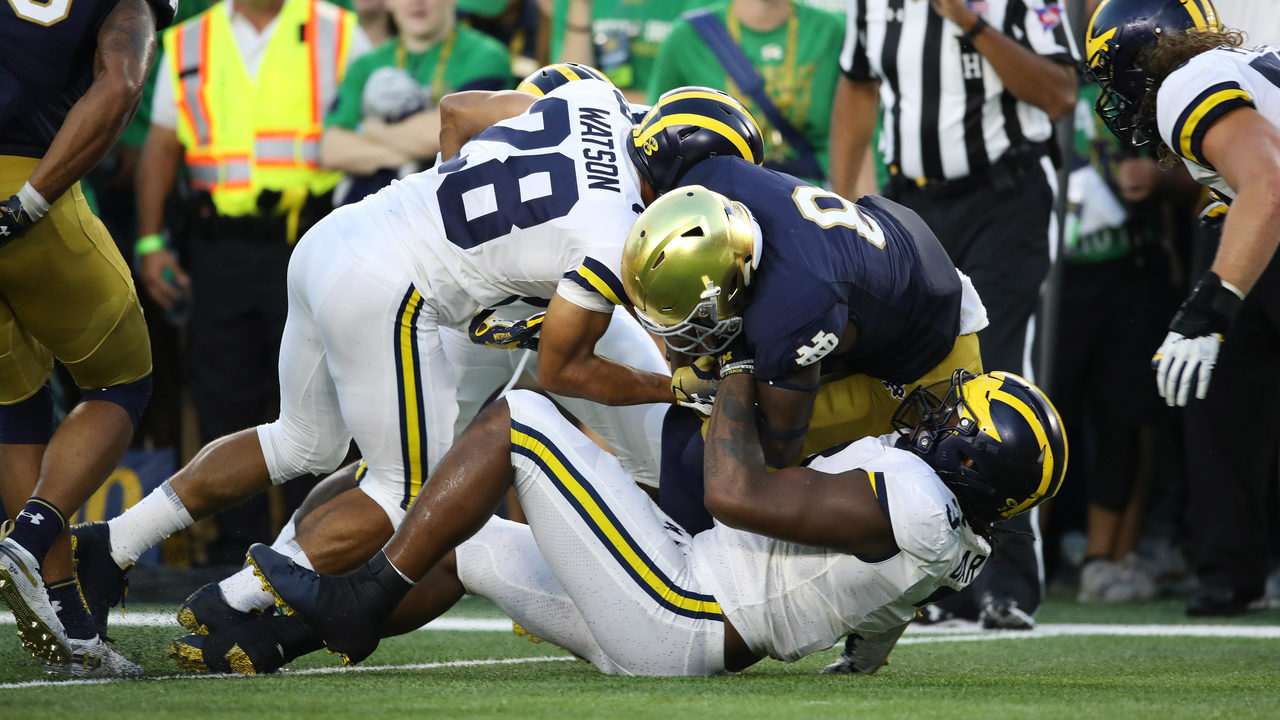 Lavert Hill and David Long entered the season as one of the top cornerback duos in the nation, but Watson has emerged as a reliable third member of that group.

Watson is tied for the team lead with two interceptions and has also broken up a pair of passes in coverage. Like any member of Brown's aggressive defense, Watson has made multiple tackles behind the line of scrimmage this season, but his strength is making plays downfield.

Against Maryland, Watson put an exclamation point on Michigan's win with a 46-yard interception return for a touchdown. 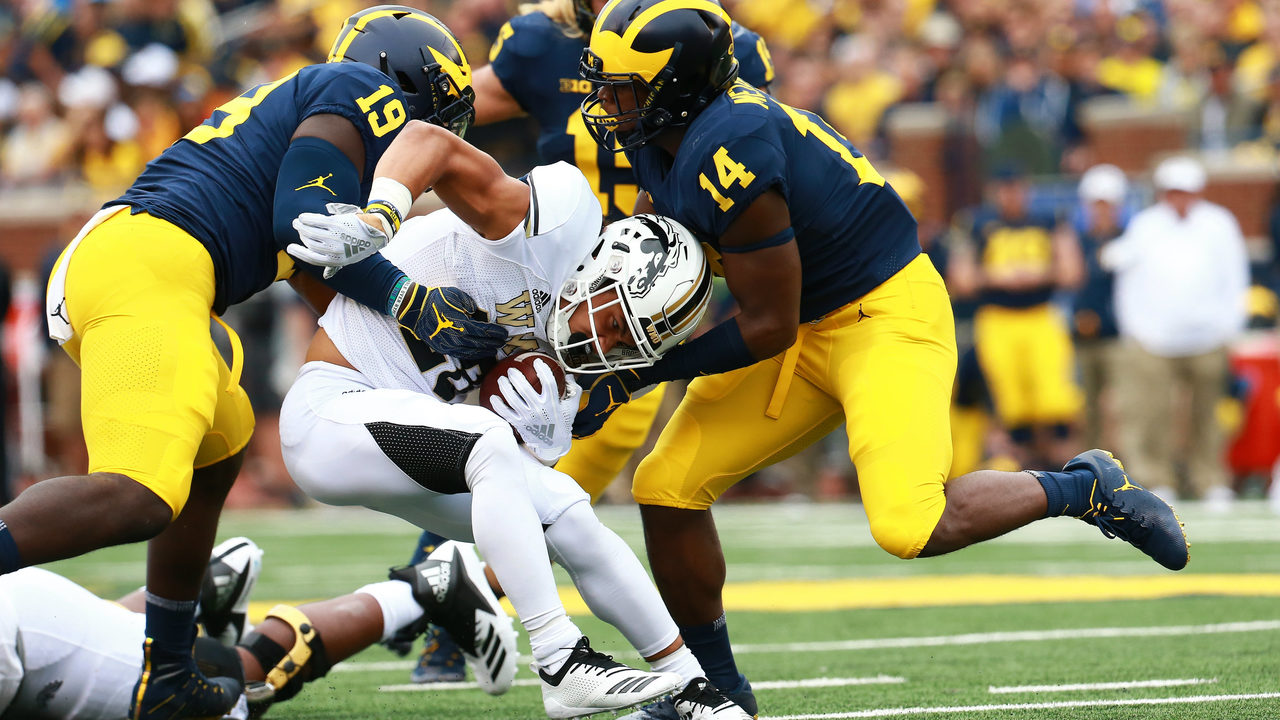 Paye is another player, like Uche, who has earned more defensive snaps as the season progresses and makes the most of his playing time.

The true sophomore has been a terror in opposing backfields this year, racking up 3.5 tackles for loss and a pair of sacks, both top five on the team. He also came up big in the Northwestern game, sacking Clayton Thorson twice, including one that ended the Wildcats' penultimate drive.

Paye didn't see the field much at the start of the season, but 10 of his tackles have come in the last three games as he earns the trust of the coaching staff.

Safety was the biggest concern for Michigan's defense coming into the season, but Metellus has made some big plays against the pass and the run.

In his second season as a starter, Metellus is tied with Watson for the team lead in interceptions and also ranks fifth on the team in tackles for loss. Metellus was known as a big hitter in high school, but he's made plays in the passing game as well.

Metellus' specialty will always be defending the run, but he'll be tested against some of the elite passing offenses still on Michigan's schedule. 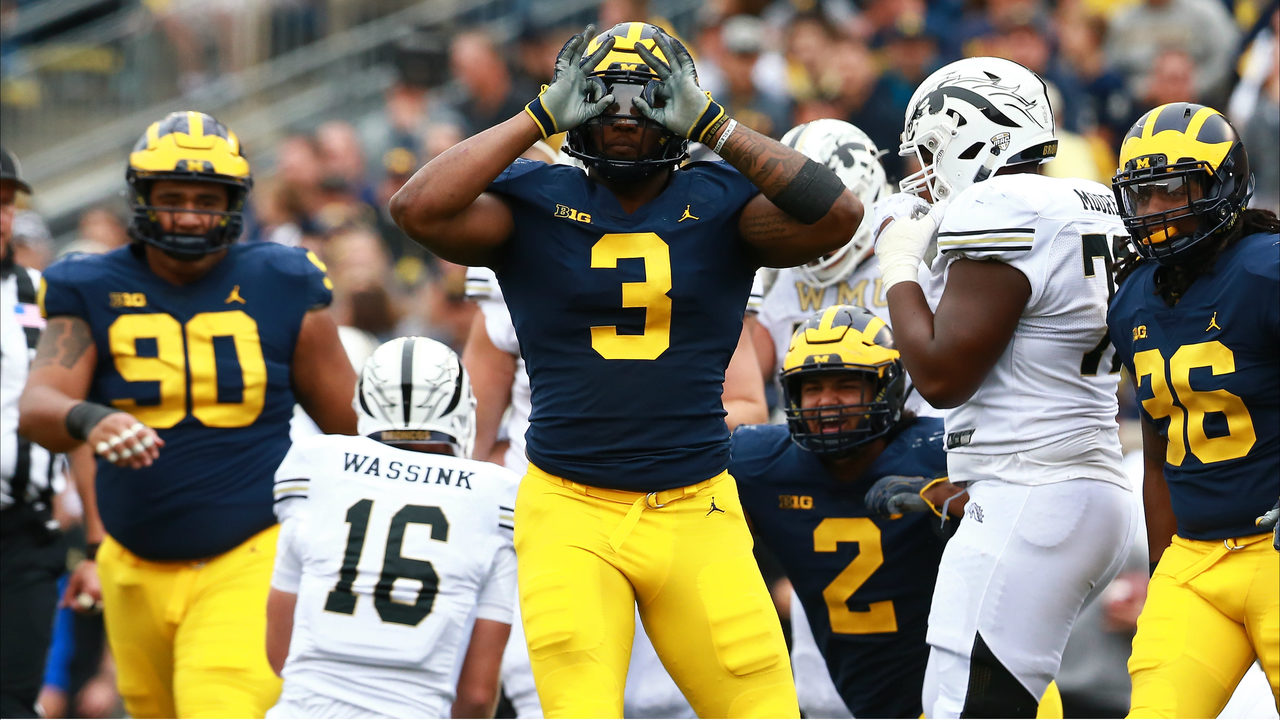 It's a testament to Gary's dominance that he's putting up great numbers despite battling a shoulder injury that sidelines him for parts of seemingly every game.

After playing in most of Michigan's first five games, Gary sat out against Maryland. It was the first game he's missed in his college career after appearing in 31 straight for the Wolverines.

Gary is still third on the team in tackles for loss sacks, and Michigan will sorely miss him if he's unable to go against Wisconsin this weekend. As one of the most difficult mismatches in the country, Gary makes life easier for everyone else on the defense. 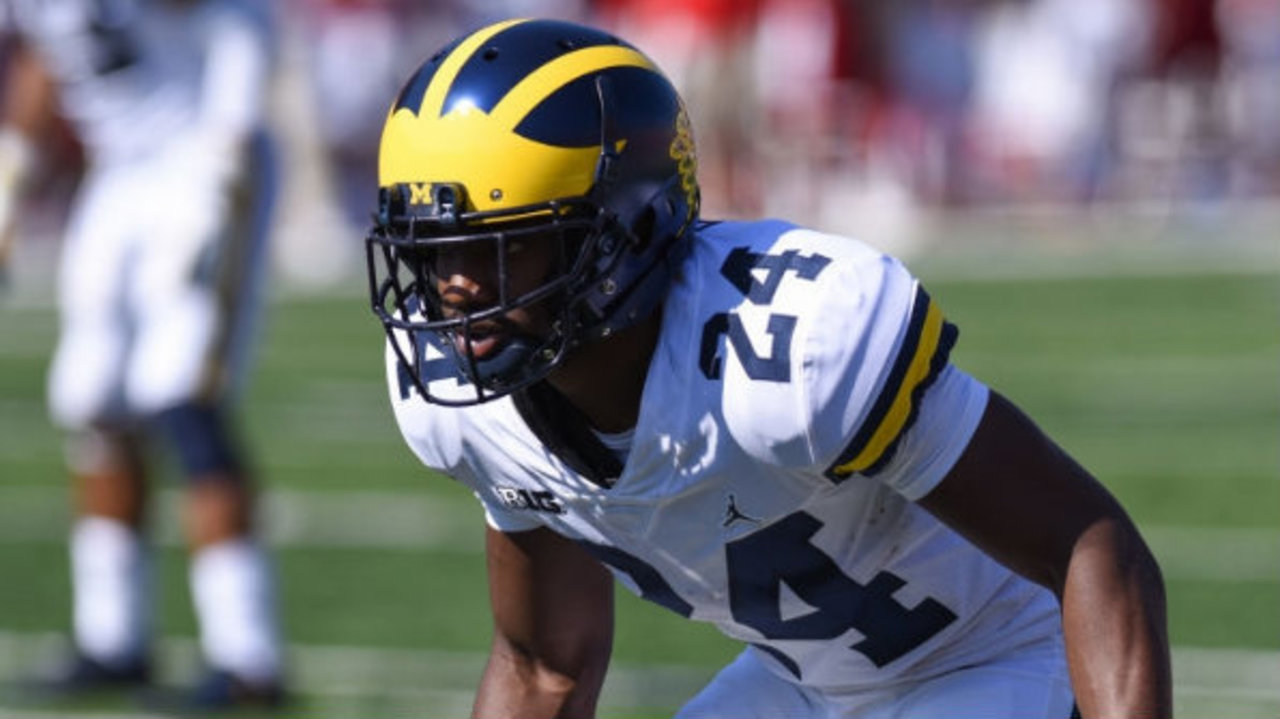 It hasn't been an easy season for Michigan's secondary, as opponents are hesitant to attack the front seven and the flags have been flying often in coverage. But through it all, Hill is having another strong season as Brown's No. 1 cornerback.

Michigan owns the No. 1 passing defense in the country, allowing just 134 yards per game through the air. Opponents are completing just 53.2 percent of their pass attempts and have thrown more interceptions than touchdown passes.

Hill is a big reason for that success, as he's already broken up five passes. Quarterbacks typically don't attack Hill because he's strong in one-on-one coverage, and the Wolverines haven't faced a truly elite receiver yet.

Long and Watson are good enough to be No. 1 and No. 2 cornerbacks, but thanks to Hill, they're able to move down a slot, which makes them even more effective. 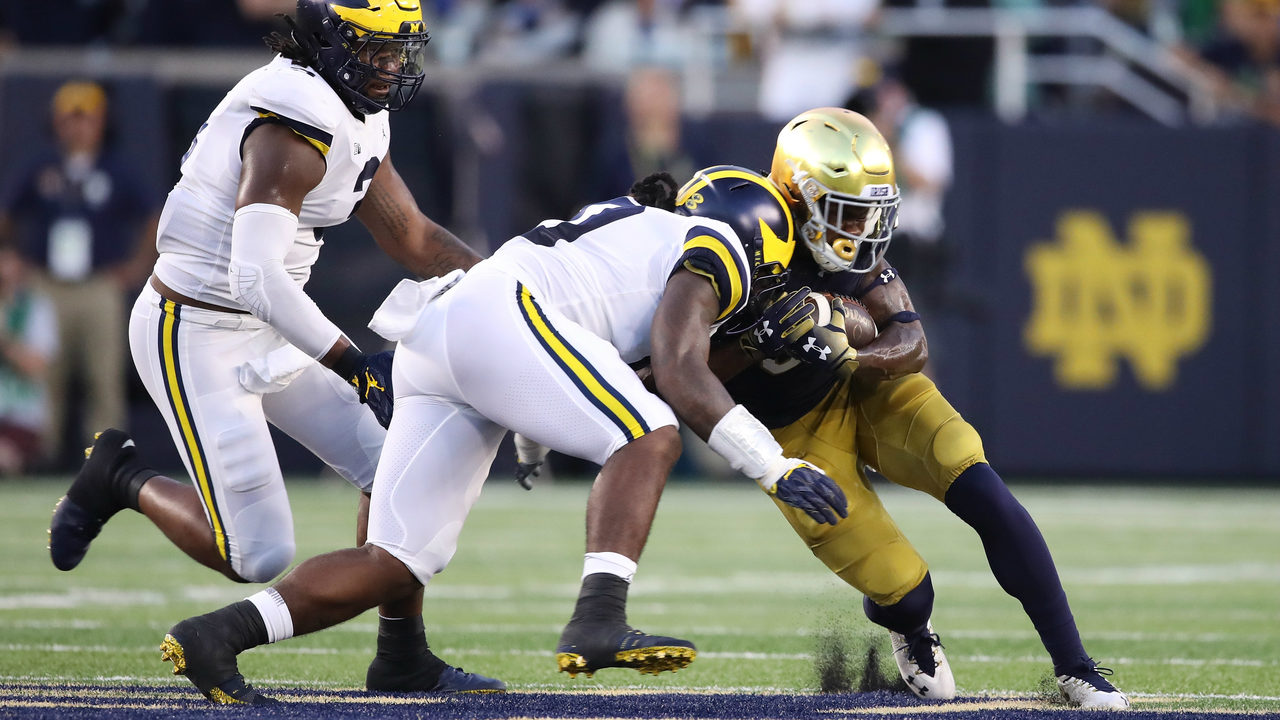 Bush is one of the best linebackers in the country because he's fast enough to chase down running backs and smart enough to always find the football. When a running back or wide receiver appears to have the edge on Michigan's defense, Bush will often beat them to the sideline and knock them out for a short gain.

Michigan fans have gotten used to Bush making those types of plays. The junior is second on the team with 21 solo tackles, a mix of big hits and plays in space. He's not great in coverage, but Bush is perfect for the role Brown carved out for him in this defense. 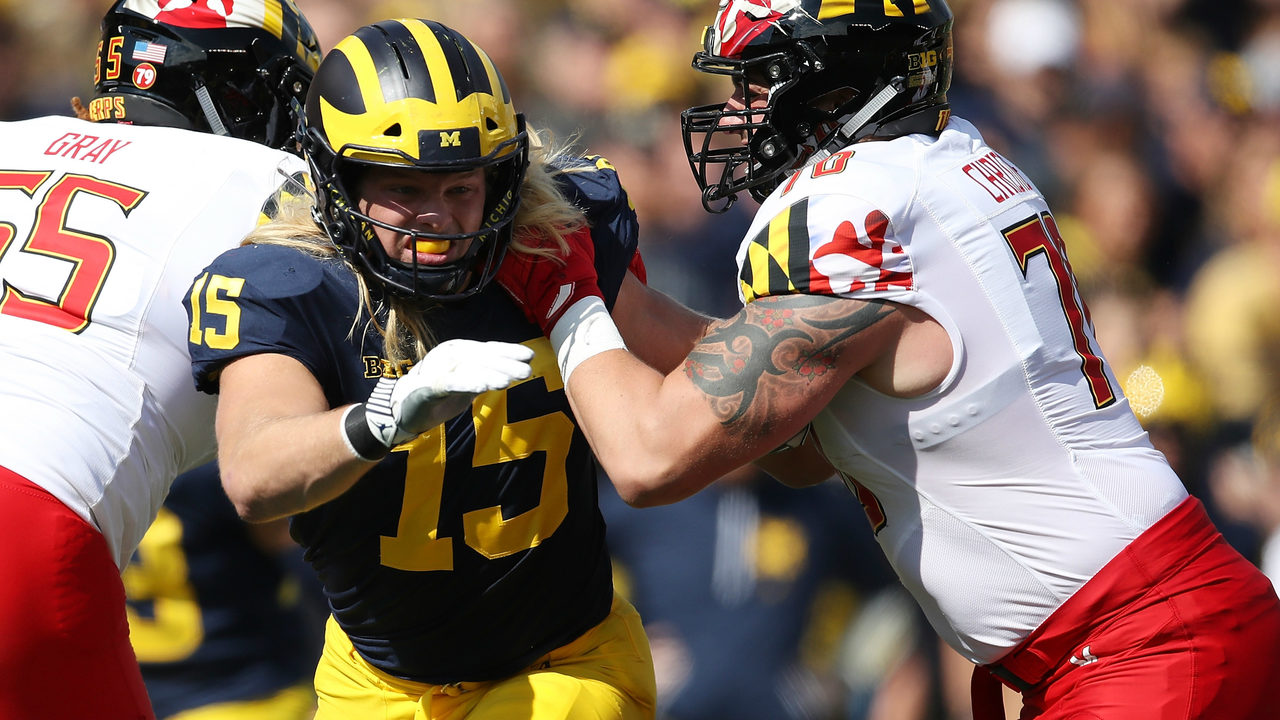 Winovich bet on himself this off-season and returned to Michigan for one more year of college. So far, that decision has paid off enormously.

Winovich leads the team with 10.5 tackles for loss -- more than twice as many as anybody else -- and three sacks. He's also chipped in an additional three hits on opposing quarterbacks. Nobody has spent more time in the backfield.

Michigan's senior ranks among the top 10 in college football in tackles for loss, only two and a half behind the national leader. Winovich shows up for the biggest games, registering three tackles for loss against Notre Dame and again when Michigan desperately needed stops against Northwestern.

As the best player on the nation's top defense, Winovich has turned into one of the best defensive linemen in college football.

Coming off a season in which he racked up 18.5 tackles for loss, Hudson has recorded just 2.5 this year. Two targeting penalties have forced the junior to missing about five total quarters of football.

As a member of the defensive back rotation, Hawkins has transitioned nicely from his high school wide receiver role. He's playing the Metellus role, notching 2.5 tackles for loss as a safety.

Kemp is another player who has earned more playing time on the defensive line, but there are so many options that he has to share snaps despite 2.5 tackles for loss.

If it weren't for injury, Hutchinson would have made the list. He was Michigan's top breakout defensive player in the first four games before sitting out against Northwestern and Maryland.

Opposing quarterbacks have been targeting Long more this year, but he's stepping up to the challenge more often than not. Penalties are the main criticism for Long this season, but there's no reason to believe he won't be good down the stretch.