Juneteenth 2021: Here’s what Detroit has planned for the week

It may seem that historic preservation has always been a thing -- but the movement is only a few decades old -- especially in Detroit.

Follow the cobblestone road to one of Detroit's most historic streets and the start of a preservation movement that's still alive today.

The West Canfield Historic District, built on a cobblestone road in Detroit's budding Midtown neighborhood, has preserved much of its storied history through the ups and downs of the city.

The historic neighborhood on West Canfield is located between Third and Second, sandwiched between Willis and Prentis. It's one street with 14 Victorian-style houses, many dating back to the mid-to-late 1800s.

The street has seen it all. Many of the homes have been through fires and remodels, serving as homes to blue collar families, as well as prominent Detroit historical figures.

Present-day residents of the street work together to keep its story intact and accessible, while much of the surrounding area is being redeveloped.

The birth of West Canfield

The upper middle-class Victorian homes that occupy the West Canfield Historic District date back to the 1870s when Detroit's growing population began pushing at the edges of the city's original boundaries.

The area surrounding the West Canfield Historic District was once owned by Lewis Cass, an early governor of Michigan. Of his two daughters who inherited the land after his death, one was married to Captain August Canfield, a graduate of West Point Academy and a major investor in the construction of the ship canal at Sault Ste. Marie.  In 1871, Mary Cass Canfield subdivided her land and named Canfield Avenue in honor of her husband.

Located about two miles from Detroit's central business district, the West Canfield Avenue area's original plat specified that each lot would be a spacious 50 by 190 feet, and that there would be "a 30 foot setback for sidewalk, shrubbery, and ornamental purposes."

By the late 1870s, the area was populated by the families of retail owners, manufacturers, doctors, dentists, and architects -- professional men who possessed the economic means to build homes on West Canfield Avenue's relatively large city blocks.

Construction of high-quality brick Queen Anne homes continued into the 1880s, and reflecting the alleged social and moral character of Victorian professionals, city histories of the time referred to the West Canfield neighborhood as "Piety Hill."

Although the District remained a prime residential location in Detroit for many decades, it began to decline in the 1930s due to the onset of the Great Depression.

By the 1960s, however, the West Canfield Historic District was revived and its historic streetscape was restored.

In 1997, the District was expanded to include one additional Queen Anne style residence - and two Victorian commercial buildings, on Third Street.

The rebirth of the District was thanks in part to a woman who fell in love with the neighborhood and the city of Detroit: Beulah Groehn.

Beulah Groehn and her husband Henry Groehn moved to West Canfield in 1965.

Before purchasing the house, Beulah volunteered for the Detroit Historical Society, where she worked with many Detroiters who were actively advocating for the city's history.

"A street without pride, she thought, dies like an unwatered flower. Her job: to restore the house and to revive West Canfield's pride," as described in a magazine profile of the street in 1974.

Shortly after buying the house, Beulah organized fellow neighbors to pursue a local historic designation for the street - which had never been done at a local or state level.

The campaign came after two houses across the street were proposed to be demolished to make room for a new apartment building. 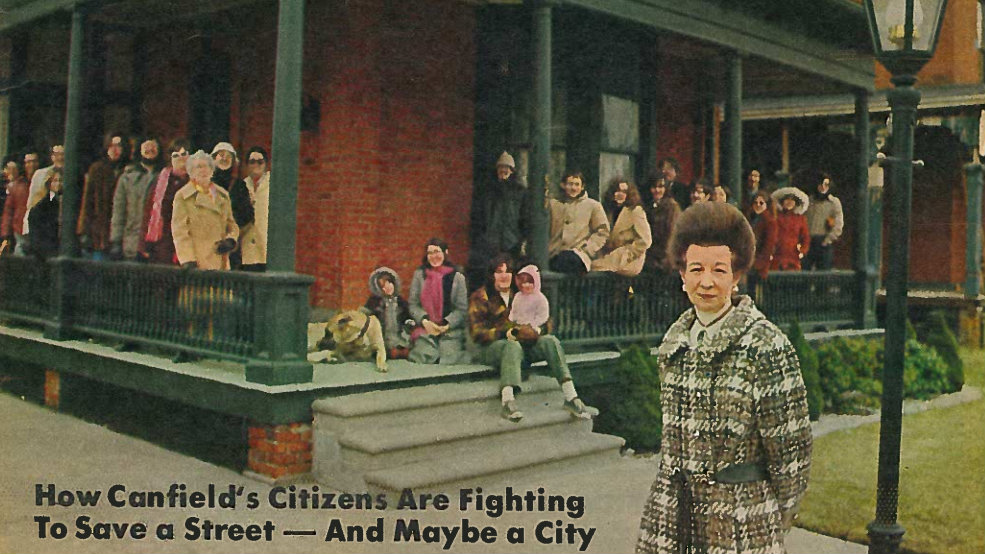 For the designation to carry meaning, the city would have to adopt a new ordinance. But, the state of Michigan had not yet passed legislation that would give municipalities the power to enact and enforce their own historic designations and ordinances.

Beulah wrote a letter to Detroit's planning director at the time, Charles Blessing, saying, "Our block is an excellent example of the inherent potential for restoration of the inner city."

After years of pushing for the passing of the ordinance, it was finally approved in 1969 and the West Canfield Historic District was established in 1970 - the first historic designation in Detroit.  It was listed on the National Register of Historic Places in 1971.

Beulah Groehn continued her preservation work for years to follow, eventually joining Detroit's Historic Designation Advisory Board. In 1972, Groehn led a proposal to restore West Canfield's physical street to a more historical look -- the cobblestone road that still exists today. You can read it here.

She lived on West Canfield until her death in 2001.

In a 1974 profile of Beulah in the "New Center News," she is described by writer Tina Noor as an "open, direct individual," who "does not mask her sense of accomplishment, nor does she minimize the opposition she encountered."

Today, the preservation movement has continued in Detroit and around the state of Michigan. Many (not all) historic buildings have been saved thanks to historic designations.

Who else lived on West Canfield?

For the 100th anniversary of the street, in 1969, residents published a full guide to the neighborhood, including a list of who lived in each house, dating back to its first residents. Here's a list of original residents in each home:

Present day life in the West Canfield Historic District is as normal as any other street. The restored Victorian homes are filled with residents who have been on the street for decades, joined with young professionals and families.

The sidewalks are often busy with joggers and dog-walkers as the other side of West Canfield, near Cass, continues to grow, with stores and restaurants. The street is a popular tourist destination for city tours and photographers.

Hey, if you like this newsletter, let us know. We'd love your feedback. We also offer several other newsletters that probably cater to at least one of your interests -- unless you're only interested in fire alarms. We don't have one for fire alarms. Sorry.

Be sure to check in with ClickOnDetroit throughout the day for the latest news, weather and traffic. We're always working to keep you updated on the stories that matter most to you. We also like to have some fun along the way.