Will the Red Wings make the playoffs?

Will the Red Wings be meeting them at the tees in a couple weeks?

With five games remaining, Detroit is chasing the Philadelphia Flyers and Boston Bruins for either the final Eastern Conference wild card position or third place in the Atlantic Division. The Red Wings have gone 5-5 in their past 10 games, including a 6-2 loss to the Tampa Bay Lightning and a 7-2 loss to the Pittsburgh Penguins, which was on a Saturday in front of a yearning Joe Louis Arena crowd. Phil Kessel had a 5-point afternoon.

However, in the same 10-game span Detroit beat the New York Rangers, 3-2, and the division-leading Florida Panthers, 5-3, in Florida. Wild inconsistency seems to be a fitting way to describe the Red Wings of late. Another example: They scored three power play goals Tuesday night in Montreal, but lost 4-3. The power play had been a sticking point with the potential to be an x-factor for the Red Wings down the stretch. It's an unlikely positive to take away from such a loss in Montreal, but it's a big positive nonetheless.

Meanwhile, it appears goalie Jimmy Howard has won back his starting role with the team -- for now -- as Petr Mrazek struggles to return to the level he was at earlier this season. The goalie situation is irrelevant if the team can't find consistency overall. Scoring, in general, has come at a premium for Detroit this season while goals against per game is up over the past five seasons.

Red Wings' goals for and against per game over past 5 seasons: 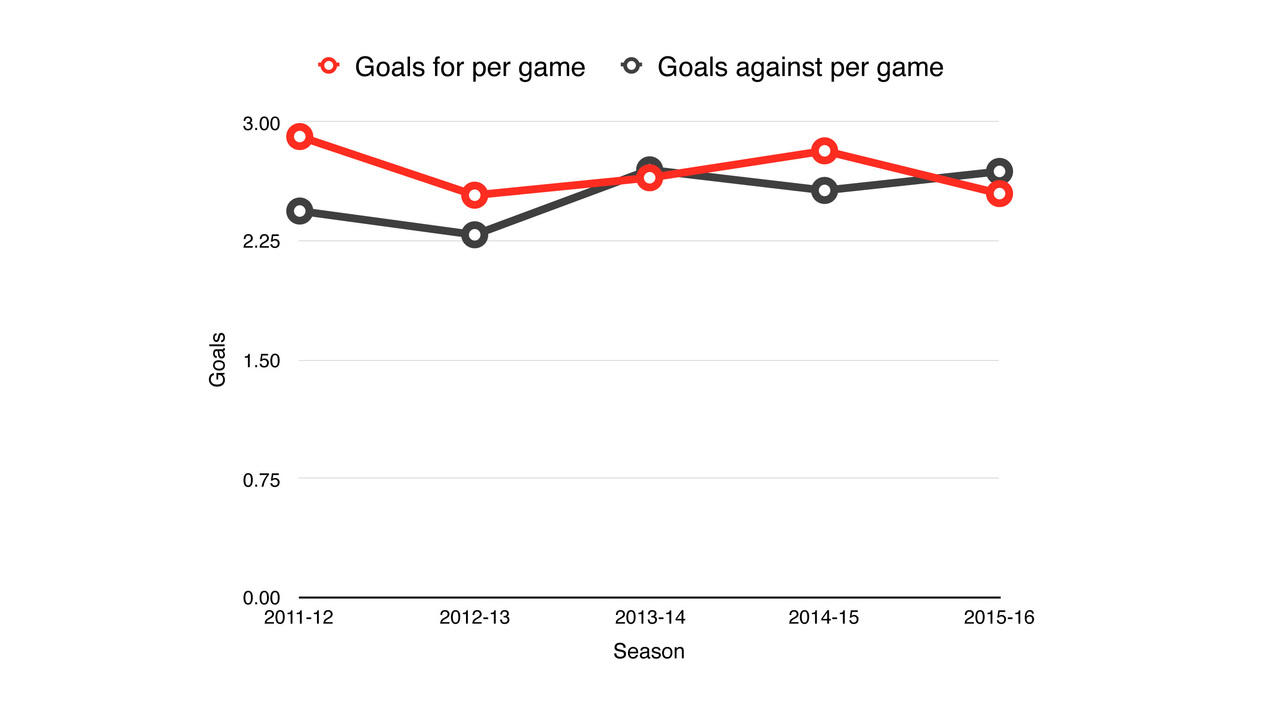 Regardless, the Red Wings still have a fighting chance to win a 25th consecutive trip to Lord Stanley's playoffs.

Here's a closer look at their final five games of the season: 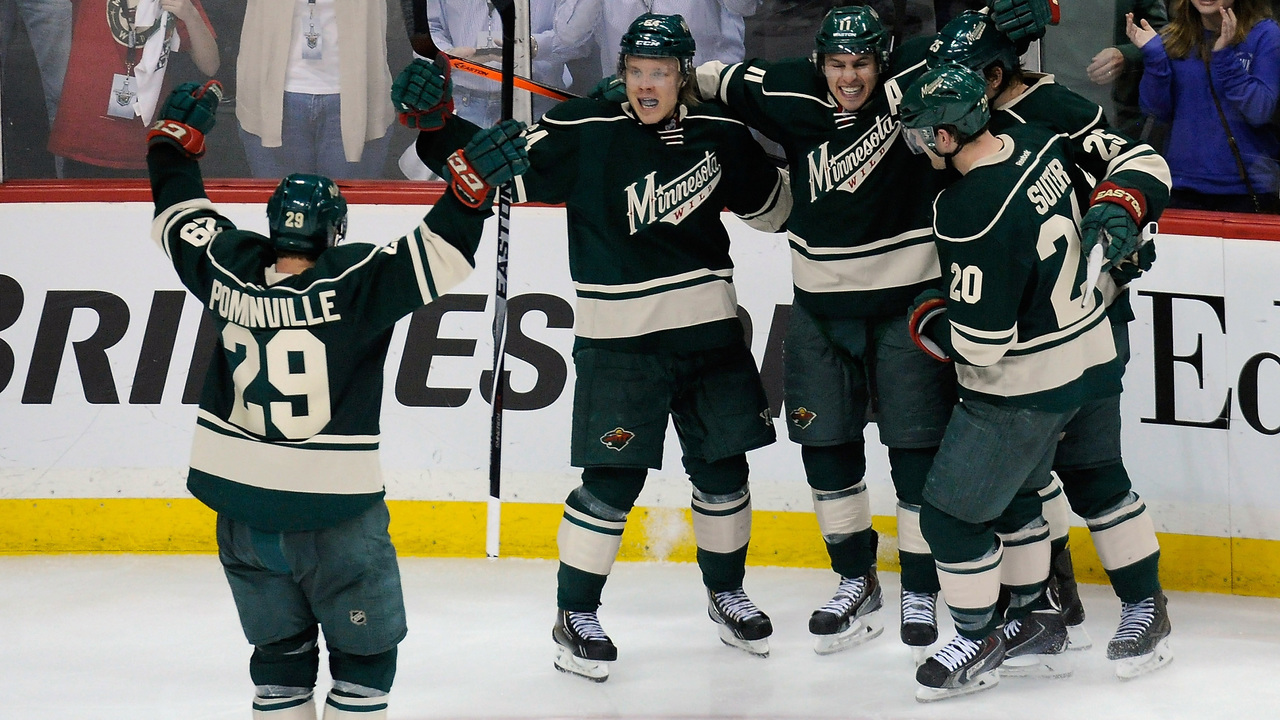 The Minnesota Wild are a team on a mission right now. Just a few weeks ago they were not in a playoff spot. Fast-forward a dozen games and they are one of the hottest teams in the West. They now have 5 more points than the ninth-place Colorado Avalanche. As of this writing, the Wild are on a six-game winning streak which includes two wins against archenemy the Chicago Blackhawks.

Minnesota is led by none other than star forward Zach Parise who has 7 points over his past four games. Nino Niederreiter continues to be an offensive force for the Wild, too. The 23-year-old forward has 5 points in his past five games and 43 points so far this season.

This will be the second and, of course, final meeting between Detroit and Minnesota this season. Minnesota won, 3-1, on Dec. 28 at home.

Red Wings' goals for and against per game this season compared to remaining opponents': 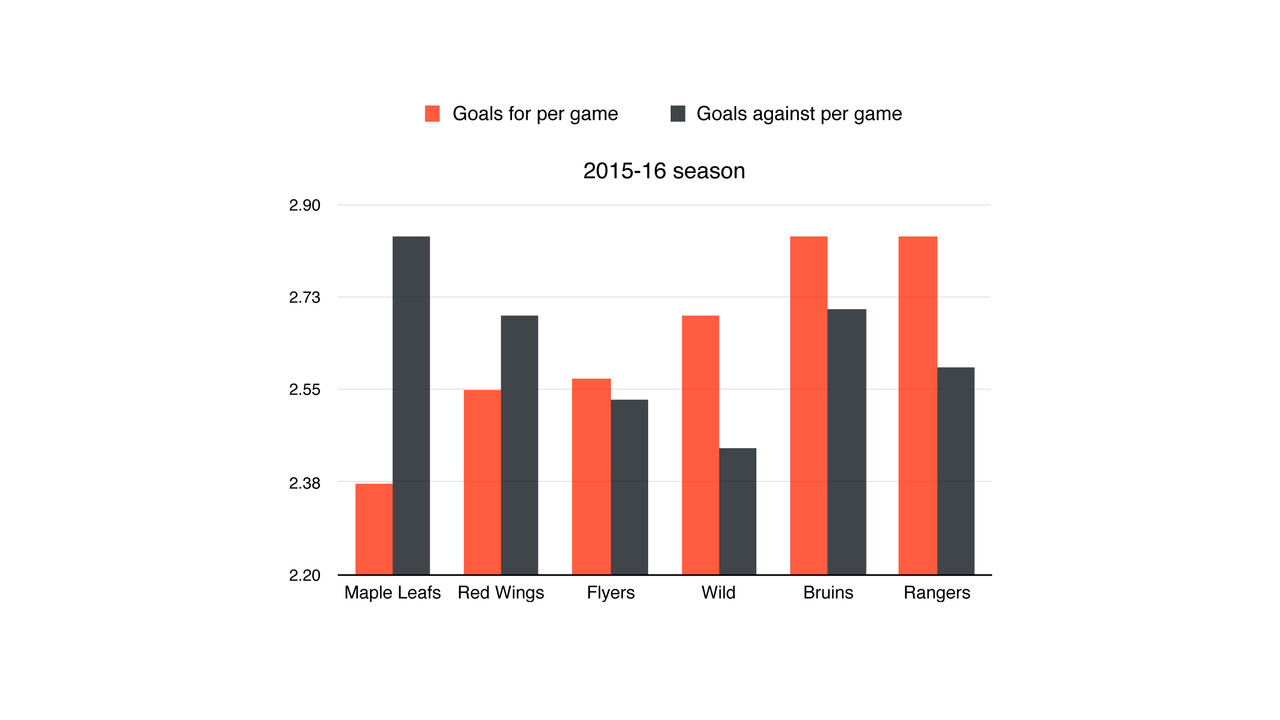 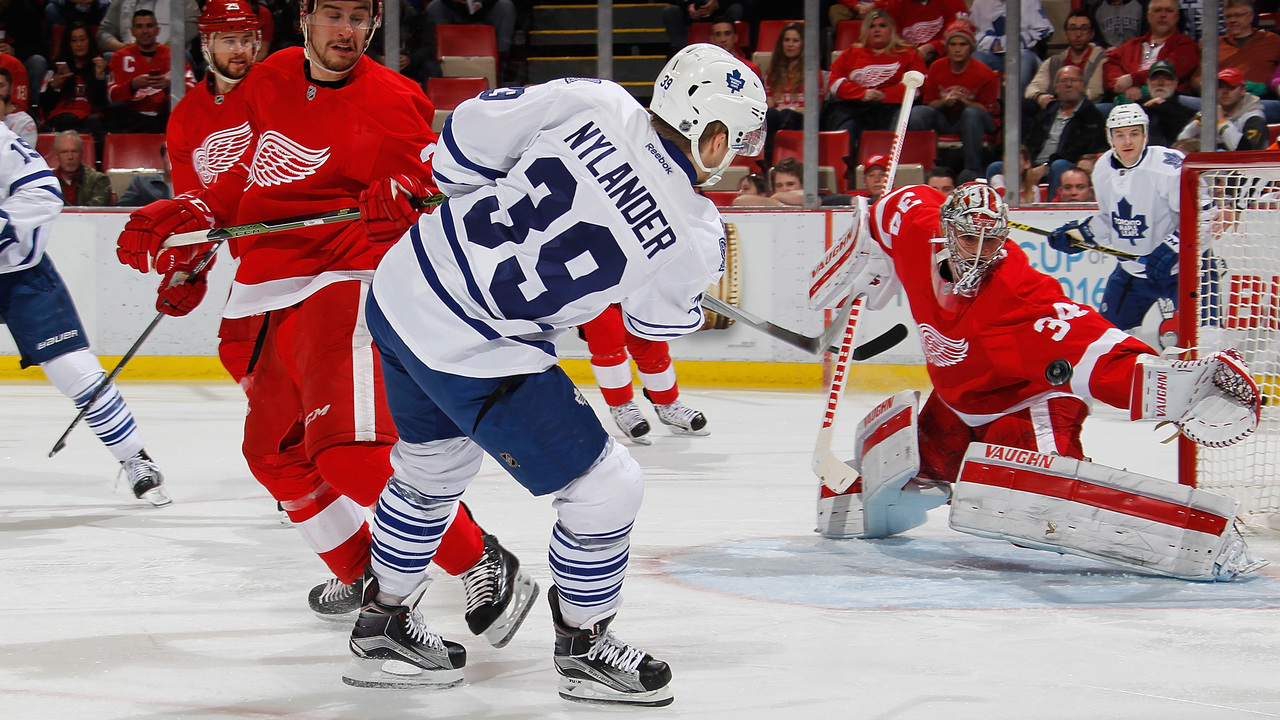 The Toronto Maple Leafs are hoping to be on the verge of a brand new start for the entire franchise. Their playoff hopes ended long ago, but the young squad has being playing tough hockey under coach Mike Babcock. They are 6-4-0 in their past 10 and topped the Florida Panthers, 5-2, on Tuesday.

The season series is 2-1 in favor of Detroit, but the Leafs shutout the Red Wings, 1-0, in the previous meeting at The Joe.

This final game is a "Hockey Night in Canada" special at the ACC. 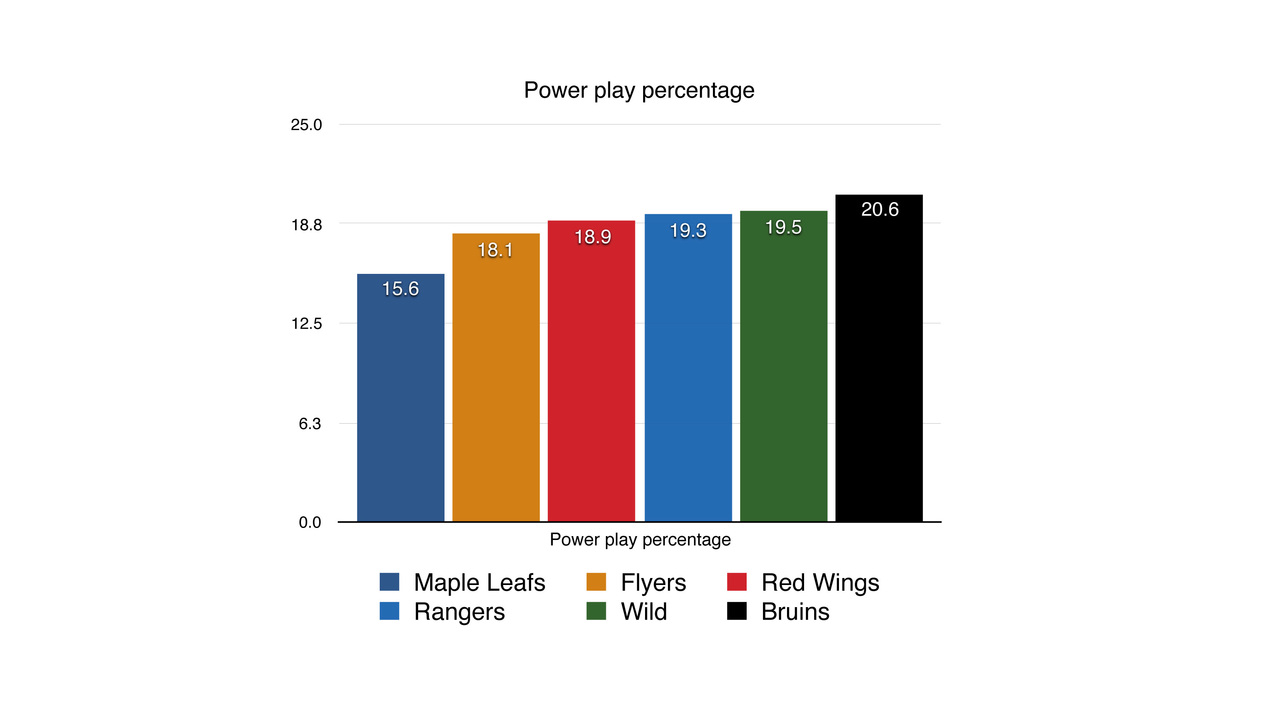 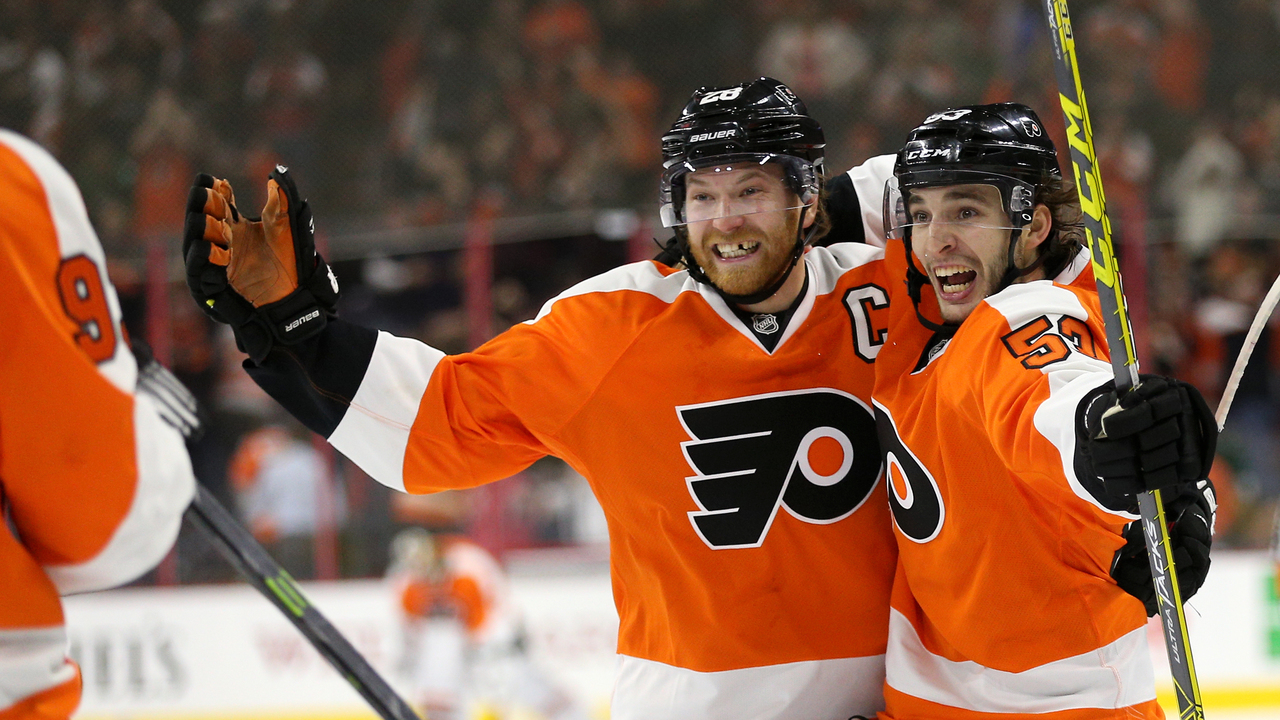 The Philadelphia Flyers could be called the Minnesota Wild of the East. The Flyers were all but out of the playoffs this season until the month of March rolled around. They are 9-3-2 this month and just beat the first-place Washington Capitals, 2-1, in a shootout.

Can you pronounce "Gostisbehere" yet? Shayne Gostisbehere has had a breakout rookie season at age 22. The Union College standout spent no more than seven games in the AHL before claiming his rightful spot in the Flyers lineup. He now has 42 points in 57 games. Seven of those points were earned on the power play.

And of course he's clutch: He has 5 game-winning goals this season.

The Flyers are 2-0 against the Red Wings this season. This third and final meeting likely will be nothing less than a playoff game.

This is one of those "Wednesday Night Rivalry" games on NBC Sports, too. "The night you love to hate," or something. 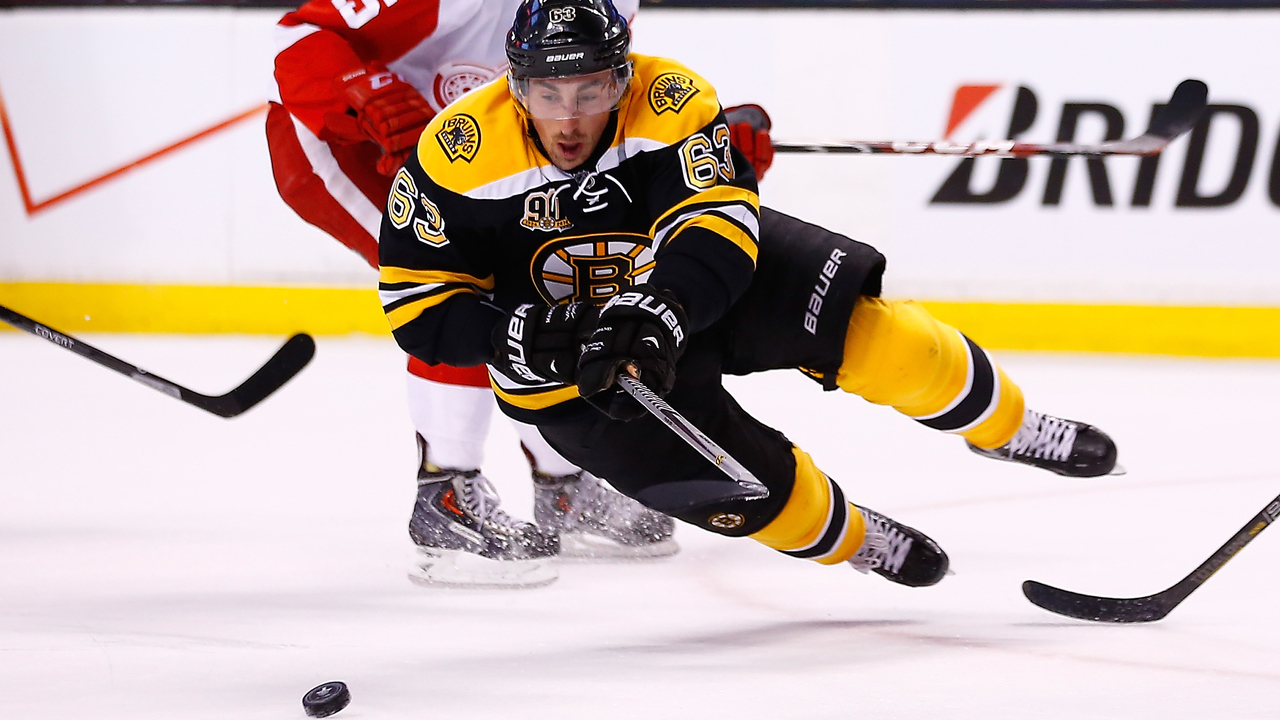 The Boston Bruins are slumping. They are a team headed in the wrong direction at the worst time of the season. The Bruins are 3-6-1 in their past 10 games and just 1 point ahead of the Red Wings for the third spot in the Atlantic Division.

This may be the most critical game remaining on Detroit's schedule. The Bruins have to play the St. Louis Blues and Chicago Blackhawks this weekend. The Red Wings can wish upon some help from their old Western foes before heading into The Garden.

The season series is 2-1 in favor of Boston. The Red Wings beat the Bruins in uncharacteristic fashion, 6-5, on Feb. 14 at home. 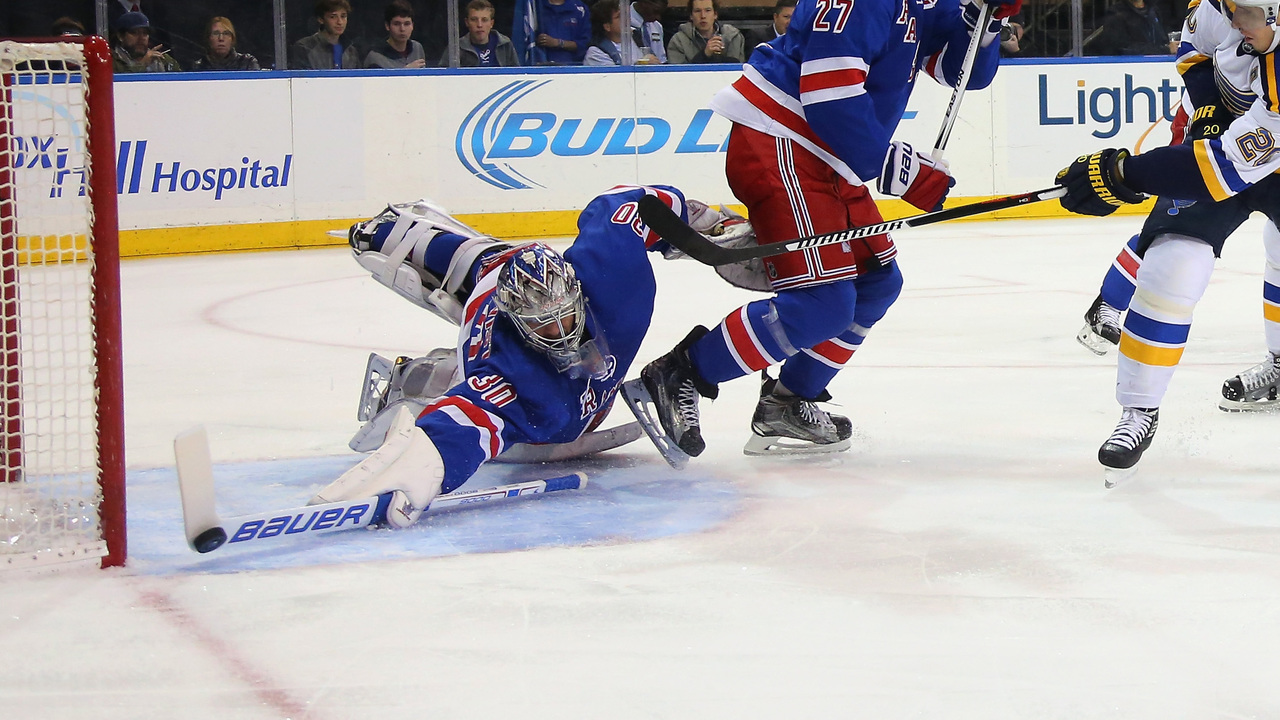 If their push to make the postseason has to come down to the final game of the regular season, the Red Wings will have to beat a very good New York Rangers group backed by world-class goalie Henrik Lundqvist.

Detroit has given the Rangers two solid games this season. First, the Rangers hung on to win 1-0 in overtime Feb. 21 in New York. Howard made 30 saves and really hasn't looked back since that game. He followed it up with 39 saves for a win in Dallas.

The Red Wings returned the favor March 12 with a 3-2 overtime win in Detroit despite Lundqvist's 43 saves.

This final game is for all the marbles, and possibly the Red Wings' postseason hopes.

(All photos are credit Getty Images)

Now that everyone is up-to-speed, answer the question: