Could the record-breaking COVID-19 numbers lead to a second shutdown for Michigan?

NFL Draft: Michigan football players the Detroit Lions could draft in each round

DETROIT – The 2017 NFL Draft is finally here, and fans in southeast Michigan have plenty to look forward to over the next three days.

The Detroit Lions are coming off a playoff appearance and one of their most impressive draft performances in recent memory. Second-year general manager Bob Quinn is looking to build off a strong free agency and get the Lions back in the playoff picture.

At the college level, there's no shortage of storylines in Metro Detroit. The Michigan Wolverines have a chance to see a record number of players selected in the draft, and Michigan State also figures to send multiple players to the league. Even Western Michigan fans have a reason to watch, as wide receiver Corey Davis is expected to be a first-round pick.

READ: Which 16 Michigan football players are expected to be drafted?

Two months ago, I selected five Michigan football players whom the Lions could select in this year's draft. With draft day officially upon us, it's time to revisit that list and see what has changed.

There's a surprising amount of criticism aimed to Jabrill Peppers throughout the country, but you won't find much of that here. Michigan's star defender showed elite raw ability during his three college seasons, and that's exactly what general managers look for in the draft: potential.

Peppers was once considered a potential top-10 pick, but now it looks like he'll be a fringe first-rounder. With the 21st overall pick, the Lions could consider going for the home run and drafting a guy who could end up fulfilling that top-10 value. 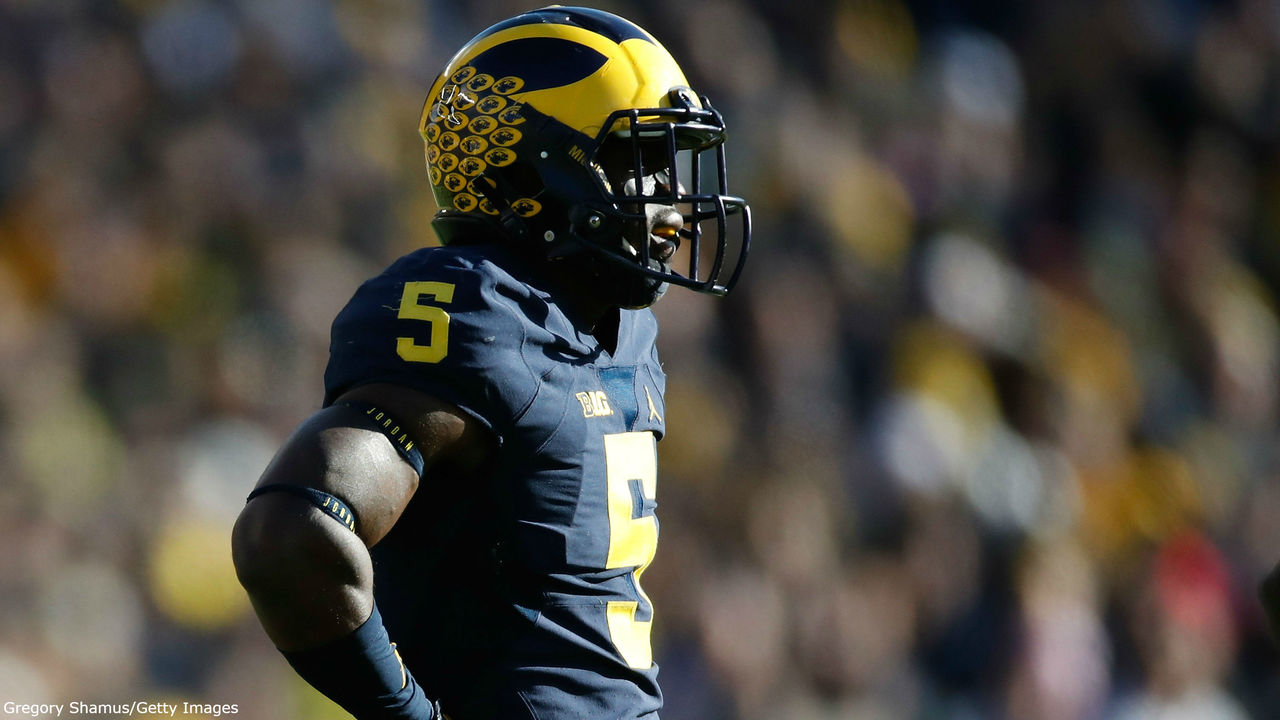 Since Peppers was named a Heisman Trophy finalist, the criticism has become overblown. He was an elite high school recruit when he committed to Michigan, and he left Michigan as one of the top five players in the nation. His diluted drug test sample was a terrible move so close to the draft, but it doesn't change the fact that he played three different defensive positions at a high level in college.

Peppers is an elite tackler and playmaker. Yes, he had only one interception in his career at Michigan, but he also made 16 tackles for loss and four sacks in 12 games last season.

If the Lions draft him as a safety, they can look back at his sophomore season, when he picked up 5.5 tackles for loss and 10 passes defended at the position. He's not great in coverage, but he has all the skills to be a very good safety.

As an added luxury, Peppers would immediately give the Lions one of the best punt returners in the league. He averaged over 13 yards per return on 39 punts throughout his career and turned some sticky situations into very good field position as a senior.

Cornerback is a definite need for the Lions, who need another strong player across from Darius Slay.

In the second round, an elite coverage cornerback like Jourdan Lewis would be a steal for the Lions, despite his lack of top-end size and speed.

Lewis was the best player on Jim Harbaugh's team last season. He allowed just 10 catches for 107 yards in nine regular-season games as a senior, leading one of the nation's top defensive units. There was no better downfield defender in the nation than Lewis, who never got beaten deep.

His playmaking ability was on full display in Michigan's toughest home game against Wisconsin, when he made an amazing one-handed interception to put Wisconsin away. It looked like the Badgers might have a big completion to tie the game, but Lewis recovered and made Michigan's play of the year.

Cornerbacks often take time to develop in the NFL, and Lewis would be no different. But he has the pure coverage tools to be a very good pro, though his 5-foot-11 frame will hurt him against some of the league's bigger wideouts.

Assuming that Alabama tight end O.J. Howard doesn't fall to the Lions at the end of the first round, it's unlikely that they'll draft a tight end before round three. This is where they could fill the need at the position with about as safe a player as there is. 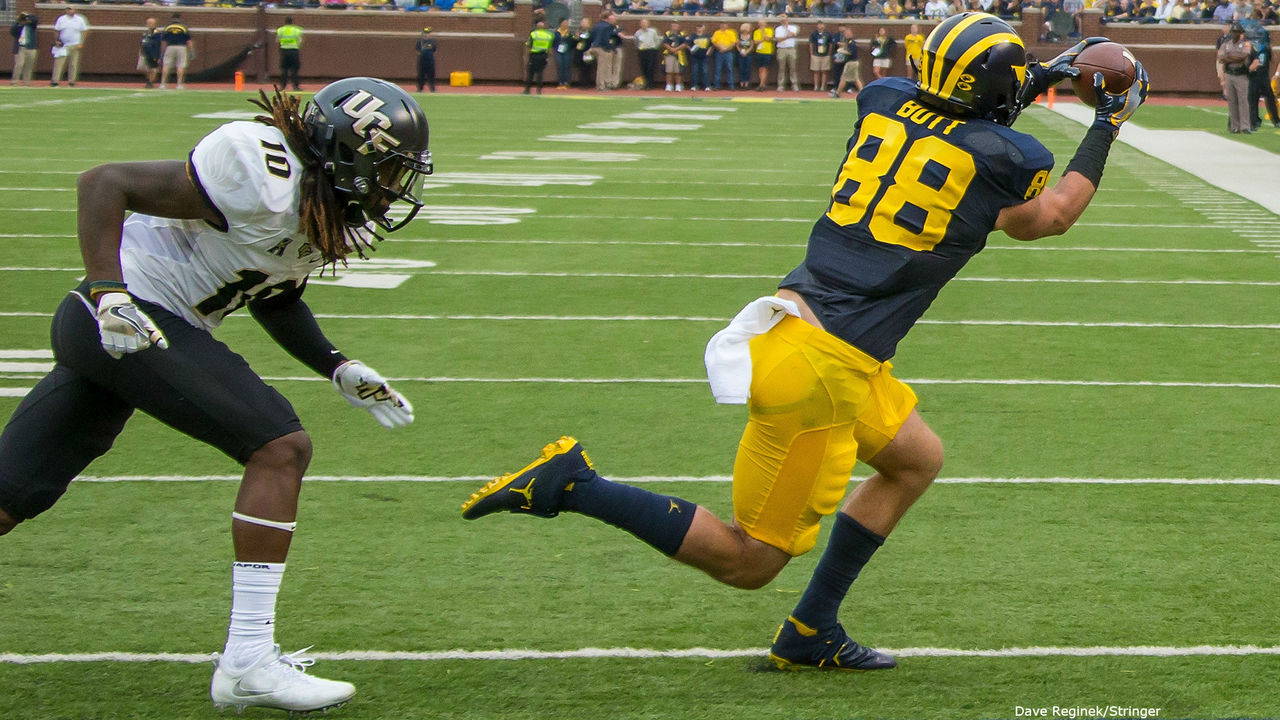 In four years at Michigan, Jake Butt was one of the most reliable players on the offense. In his final two seasons at Michigan, Butt played in all 26 games and caught 97 passes for 1,200 yards and seven touchdowns. He was Rudock's favorite third-down target in 2015 and Wilton Speight's top option last year. When Michigan needed to convert on a big passing play, it went to Butt.

A captain for Michigan his senior season, Butt was an undisputed leader in the locker room and on the field. He spurned the NFL draft to return for Michigan last year and refused to sit out the team's bowl game to protect his draft stock. Butt's is the kind of attitude around which a clubhouse is built. 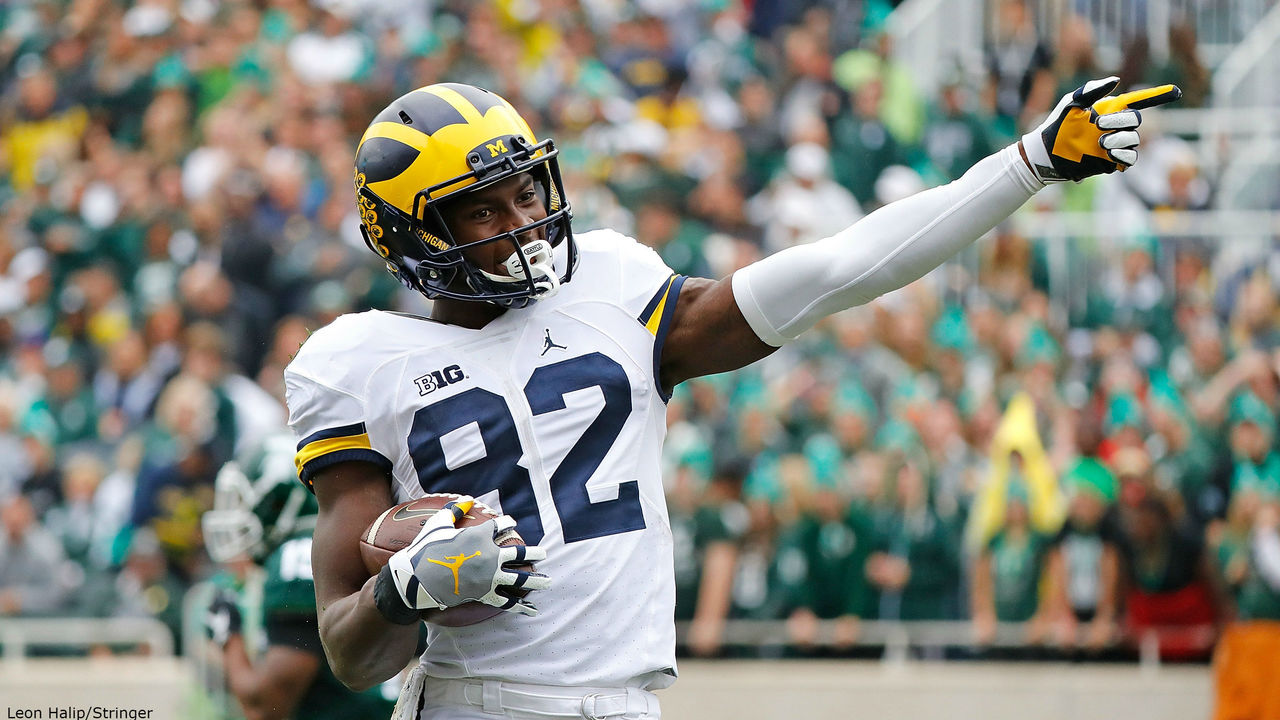 The Lions need to fill a hole at receiver after top-scoring wideout Anquan Boldin left in free agency. Marvin Jones and Golden Tate are a solid top two options, but the Lions need someone with a different skill set to join the group.

Amara Darboh is coming off a solid senior season at Michigan. He caught 57 passes for 862 yards and seven touchdowns, becoming Wilton Speight's No. 1 wide receiver target. Darboh had a few drops last season, but he has mostly reliable hands and can go up and get a jump ball.

Unlike Jones and Tate, Darboh won't make his money after the catch, but is more of a possession receiver. He has good size and made several plays downfield for the Wolverines throughout his career, including "at least one catch of at least 30 yards in eight of (Michigan's) first nine games" last season, according to NFL.com.

Darboh won't be a superstar, but he's a solid receiver and would be a nice late-round No. 3 receiver for the Lions.

Drafting a Glasgow in 2016 worked out for the Lions, so why not double down? Ryan Glasgow was one of the most underrated players on Michigan's team from a national perspective, both as a run stopper and a late-blooming pass rusher. 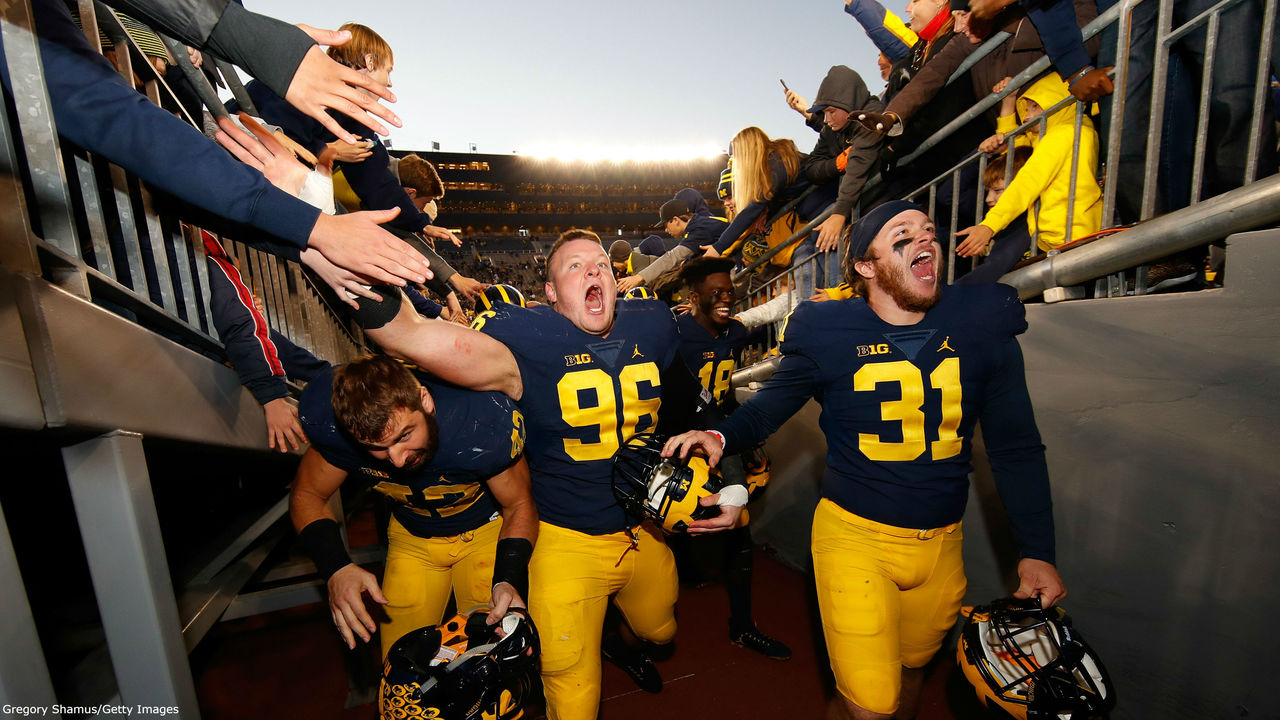 Glasgow helped anchor a top-five defense in each of his last two seasons, and a late-season injury in 2015 proved his value as a run defender. A front seven that was difficult to run against for most of the season got slashed after Glasgow went down, giving up over 300 rushing yards to Indiana and Ohio State.

Last season, Glasgow added more of a pass rush to his arsenal, picking up four sacks and nine tackles for loss in Brown's system. His specialty as a run stopper would be valuable for the Lions, especially with a similar player in Haloti Ngata entering his age-33 season.

Detroit drafted A'Shawn Robinson in the second round last season, but building high-quality depth on the defensive line, especially with a pick like Glasgow in the later rounds, would only improve the roster.

Delano Hill might be gone by the time the Lions pick in the sixth round, but if not, he could provide late-draft safety help. He improved each year and became a solid all-around contributor in the secondary.

As a senior, Hill made 52 tackles and 4.5 tackles for loss, and defended three passes. He also made a career-high three interceptions in 13 games.

Though he benefited from playing behind great cornerbacks, Hill was solid in coverage and had a knack for the big play. His deflection against Indiana in 2015 saved the Wolverines from a devastating road defeat and helped propel them to a 10-win season.

If the Lions don't fill their cornerback needs earlier in the draft (or even if they do), Channing Stribling should be on their board as Saturday moves along. 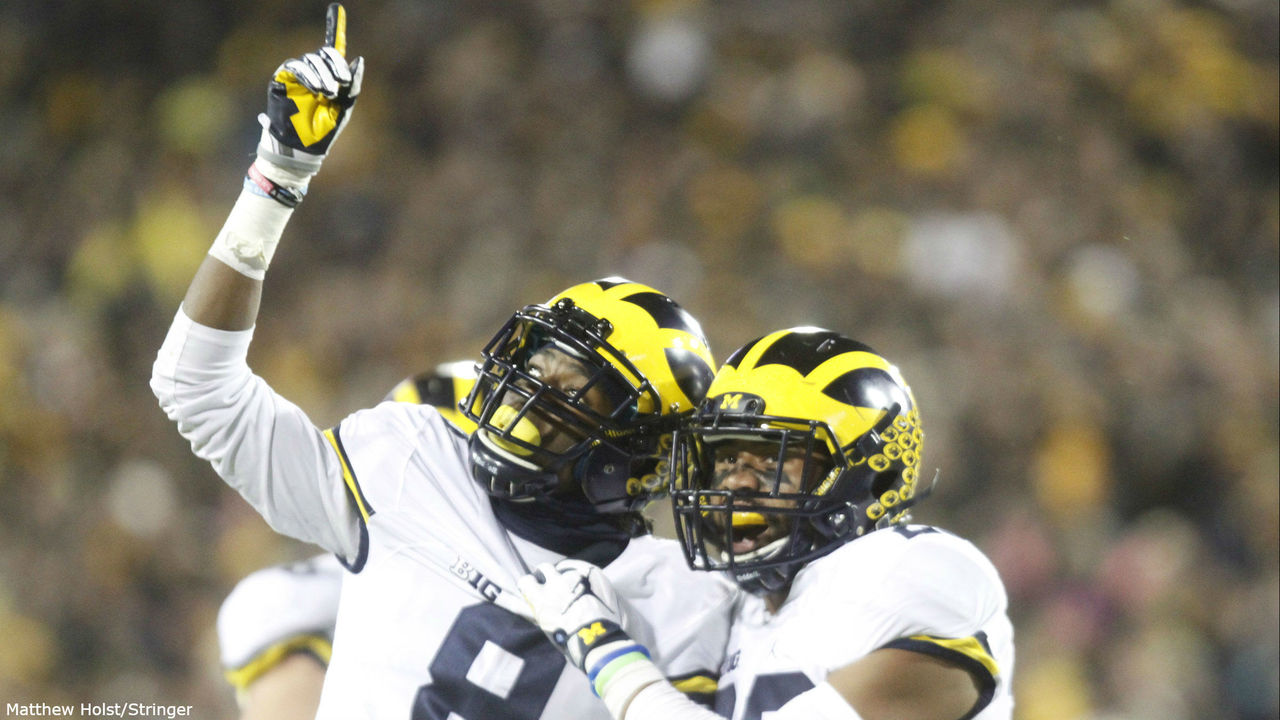 Harbaugh said he thinks Stribling will be an NFL cornerback for 10 years, and his senior season was reason for optimism. Stribling picked off four passes as a senior and led the team with 13 passes defended. He was Michigan's No. 1 cornerback during the nonconference schedule when Lewis was out with an injury, and held his own.

Stribling could be a diamond in the rough. Quinn proved last April that he has the ability to identify good role players late in the draft, and Stribling is a good player at a position of need.