Rain chances persist through weekend in Metro Detroit: What to expect

Explore Indian culture by celebrating Navaratri in Livonia this weekend

A big honor for Hockeytown

DETROIT – Today was a very special day for the City of Detroit, and for me personally, as I was given the honor of emceeing the national dedication ceremony at Little Caesars Arena for a new postage stamp called “The History of Hockey.”

That Hockeytown was chosen to host this prestigious event not only honors our rich hockey tradition here, but also our special relationship with Canada.  Making the ceremony even more significant was the fact that both U.S. Postmaster General Megan Brennan and her Canada Post counterpart Deepak Chopra attended, as both countries have issued the new stamp.

What a tremendous privilege to have them both here, and this is the first time in anybody’s memory that the postal leader of both countries jointly attended the dedication ceremony of a new stamp.

Hockey fans in attendance were treated to a remarkable experience, as former Red Wing Red Kelly, one of the NHL’s greatest all-time hockey players, spoke and told many stories about the “old days”…times spent with Gordie Howe, Ted Lindsay, Sid Abel, Terry Sawchuk and many other Red Wing greats.   One thing that Mr. Kelly said is that he wasn’t sure how he’d be received here by the fans because, after all, he finished his career with dreaded rival Toronto, and won four Stanley Cups with them.

Following his remarks, I emphasized that Detroit fans are the most loyal in the nation, and that he will ALWAYS be considered a Red Wing.  He told a great story about his first time playing back in Detroit after being traded.

He was headed into the corner for the puck with Gordie Howe right behind him, when Howe put his arm around him and asked “how’s the wife?”  Just as Kelly was about to answer, Howe checked him so hard into the boards that Kelly swears that his skates made a permanent indentation in the boards.

And speaking of Gordie Howe, fans in attendance were then treated to his son, Dr. Murray Howe, who spoke about the family’s joy in seeing the History of Hockey stamp issued.  Murray told a story about his father that I never knew:  back when Gordie was a child growing up in Saskatoon, Saskatchewan, a poor woman came to the door begging for money or food so she could feed her starving children.

She was carrying a burlap sack with miscellaneous items in it that she offered in exchange for any help.  Gordie’s mother was able to scrape up $1.50, filled a bag with food, and gave it to the woman.  After profuse thanks, the woman left, and Gordie’s mom emptied the burlap sack.  A bunch of mostly junk fell out, but one thing was worth keeping:  a pair of old hockey skates.

Gordie wore those skates for the next four years, and the rest is history.  As Murray said, you never know when an act of kindness will come back to you.

The History of Hockey Stamp is available now at your post office…it’s a “Forever” stamp that can be used on regular first class mail.   I’m sure we’ll be seeing a lot of these on Hockeytown mail over the next few months!

And by the way, if you are wondering why a meteorologist was asked to emcee a sports-related stamp issue, it’s because I am a stamp collector!  I started collecting stamps as a child when my Uncle Milt (a postal carrier) brought me over a stamp album and some stamps to keep me occupied while I was home from school with chicken pox.

Stamp collecting has enhanced my love for history…it’s amazing how much you can learn about a country over just by looking at its postage stamps over the past 100-150 years.

As much as today was a true personal highlight for me, it was even more special because Detroit once again shined in the national spotlight.

On behalf of Hockeytown, I am grateful to Postmaster Brennan for choosing Detroit for the History of Hockey stamp’s unveiling!  I hope you choose our area for another one soon! 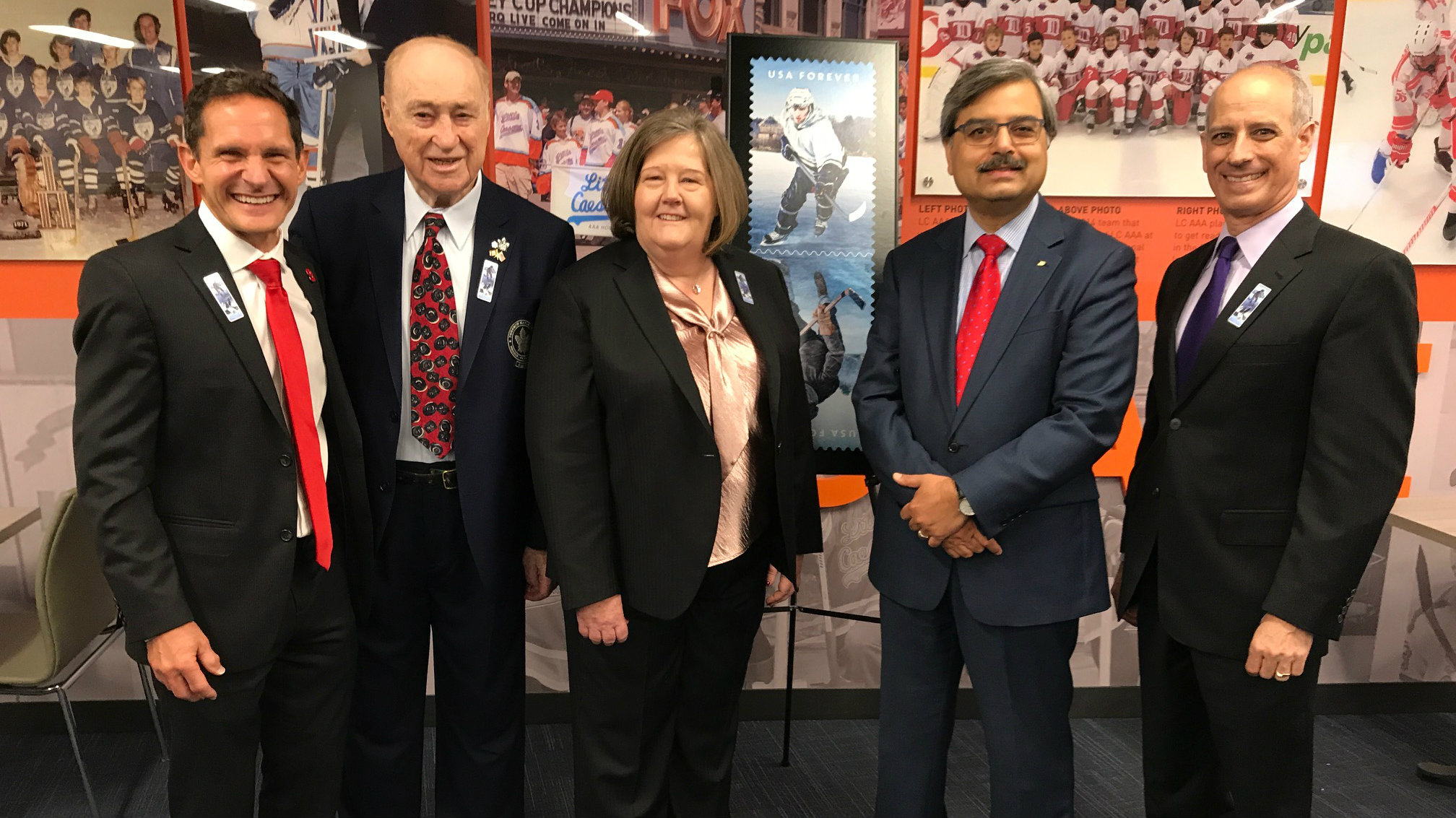 Caption of people in photo: (left to right):