Metro Detroit weather forecast: Balmy Tuesday, but massive changes are on the horizon

As expected, it’s been a windy, warm late-November afternoon across southeast Michigan. Temperatures surpassed 60 degrees (16 degrees Celsius), but Detroit’s record high of 68 degrees (20 degrees Celsius) set in 1990 is unlikely to be reached.

We do have a cold front approaching, but shower chances this evening appear pretty sparse.  If any of us get a brief sprinkle or light shower, the time frame is between 7:00 p.m. and Midnight…earliest to the north and west, latest in the south and east.  Mostly cloudy skies early on will clear before dawn, with lows dropping back into the low to mid 30s (0-1 degree Celsius).  Wind will shift from southwest to northwest overnight, and diminish to 7 to 12 mph.

Mostly sunny and cooler on Wednesday, with highs in the mid 40s (8 degrees Celsius).  Northwest to northeast wind at 4 to 7 mph.

Mostly clear Wednesday night, with clouds starting to increase after midnight.  Lows in the low to mid 30s (0-1 degree Celsius).

Any limited sunshine to start our day on Thursday will fade behind increasing clouds as the next in our series of cold fronts approaches, with light showers breaking out ahead of the front.  Highs in the upper 40s (9 degrees Celsius).

Mostly sunny on Friday, with highs in the mid 40s (8 degrees Celsius).

As I mentioned yesterday, it looks like a fantastic weekend ahead for holiday shopping.  Get out there and support our local businesses!  I personally do not send my money out of state and buy any gift online unless I cannot find it anywhere locally.  Boy do our local merchants love to see you and me walk into their stores.  Expect partly cloudy skies Saturday, and mostly sunny skies on Sunday, with highs in the mid 40s (8 degrees Celsius) both days.

Next week – Big Changes on the Way

A pretty significant pattern shift will materialize next week, but the transition this time will be a slow one.  We should start Monday with at least partial sunshine, but clouds will increase and some showers are possible later in the day.  Highs in the upper 40s (9 degrees Celsius).

The approaching Arctic cold front inches closer on Tuesday, with a continued chance for rain showers.  Highs will still be in the mid 40s (8 degrees Celsius).

The front comes through probably Tuesday afternoon, with much colder air slowly oozing in Tuesday night.  By Wednesday, highs will likely only be in the mid to upper 30s (3-4 degrees Celsius), with even colder air coming on its heels.  Here’s a very graphic way to show you the upcoming pattern change.   These first two maps show how two different models (the ECMWF and GFS) are showing the CURRENT upper air pattern…approximately 20,000 feet aloft.  You won’t see much difference between the two…they have analyzed the current pattern very similarly.  Roughly speaking, the jet stream is in the green area. 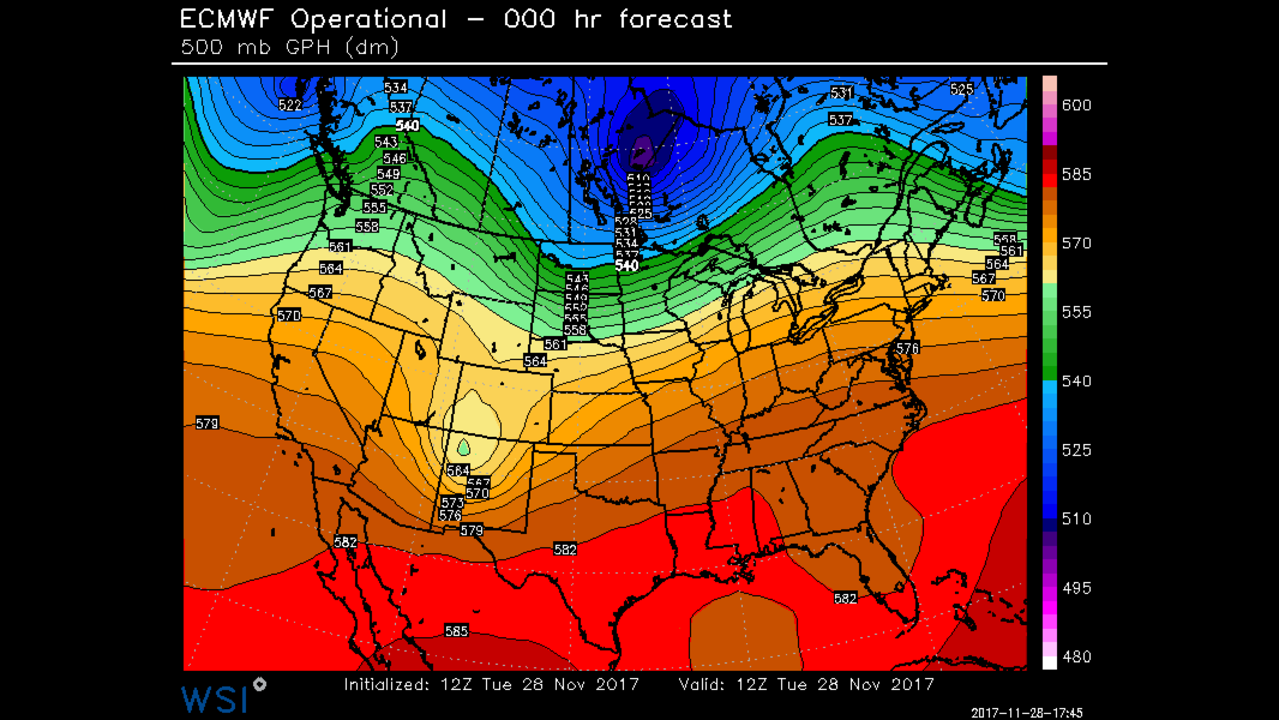 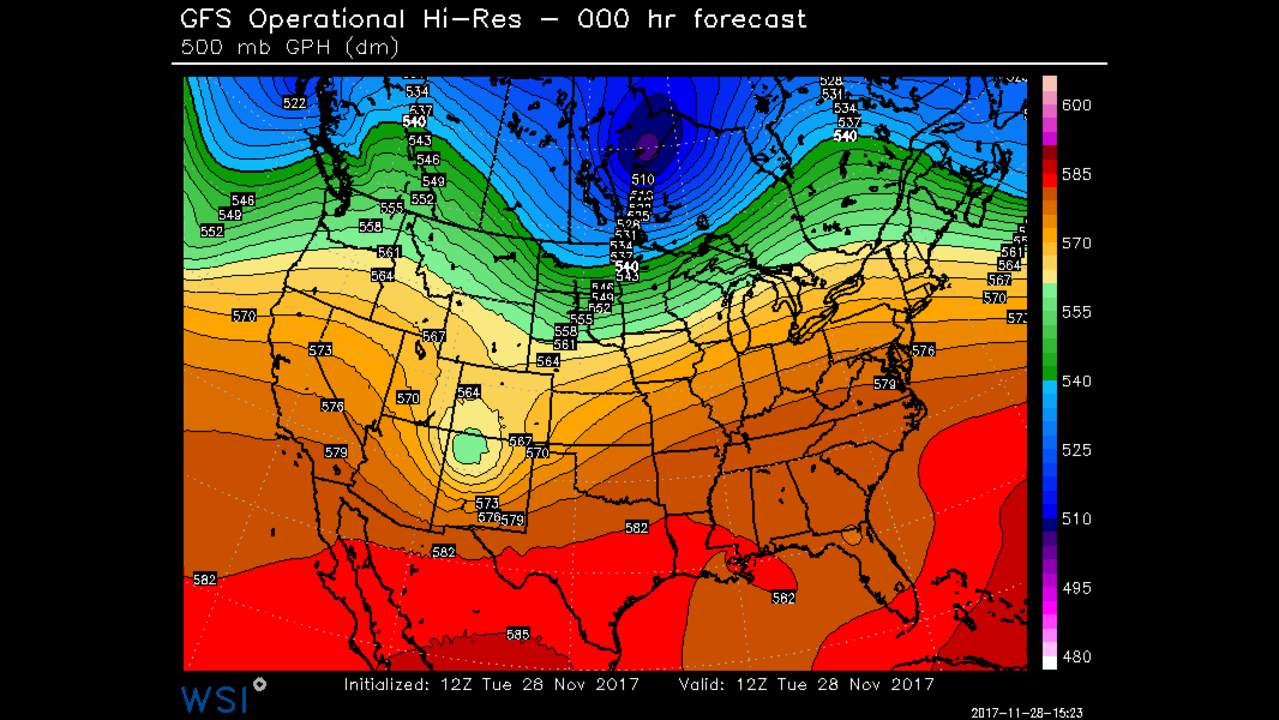 Here are the two models’ respective outputs for 7:00 p.m. Thursday next week.  Notice the similarities in the pattern change from what you see above.  The GFS looks more aggressive with the cold air plunge than the ECMWF, but both have the same general idea.   Based upon some atmospheric circulation patterns I’ve been tracking, it appears that this colder than normal regime will stick around for a while.  It’s time to start dreaming of a White Christmas!  Of course, it’s too early to say yet if we’ll have one, but the Local4Casters are keeping our eyes on it… 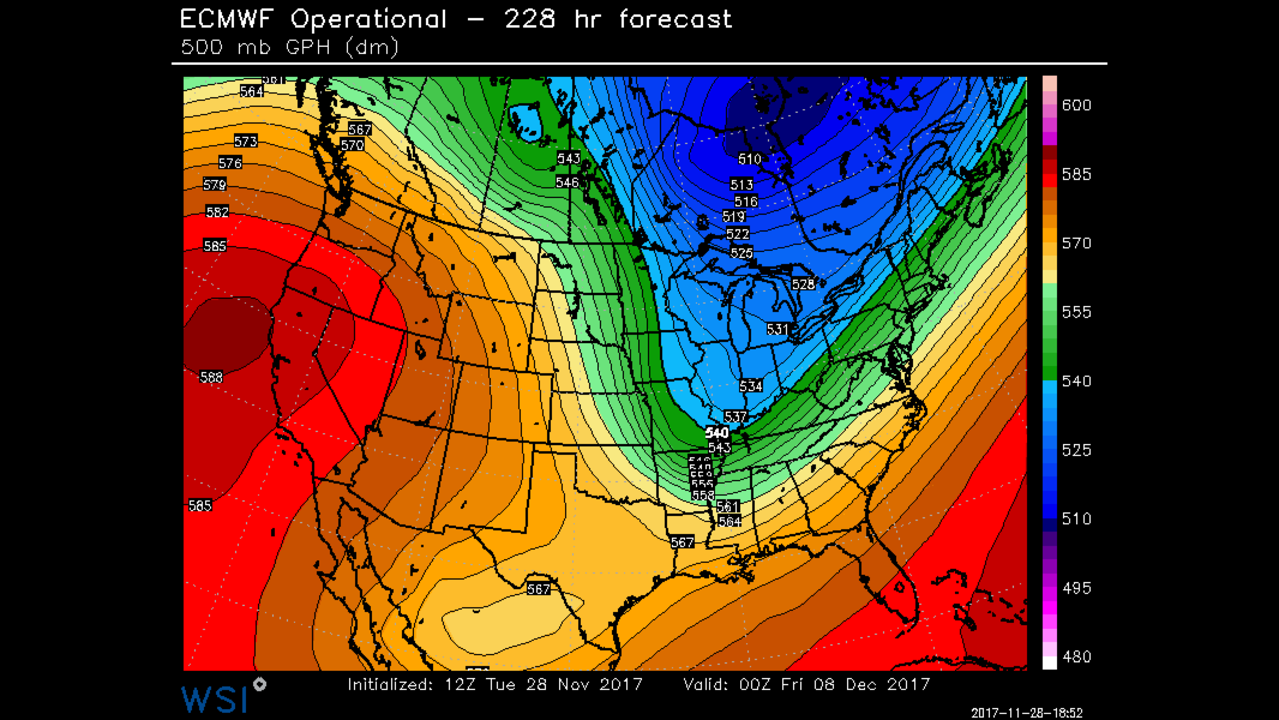 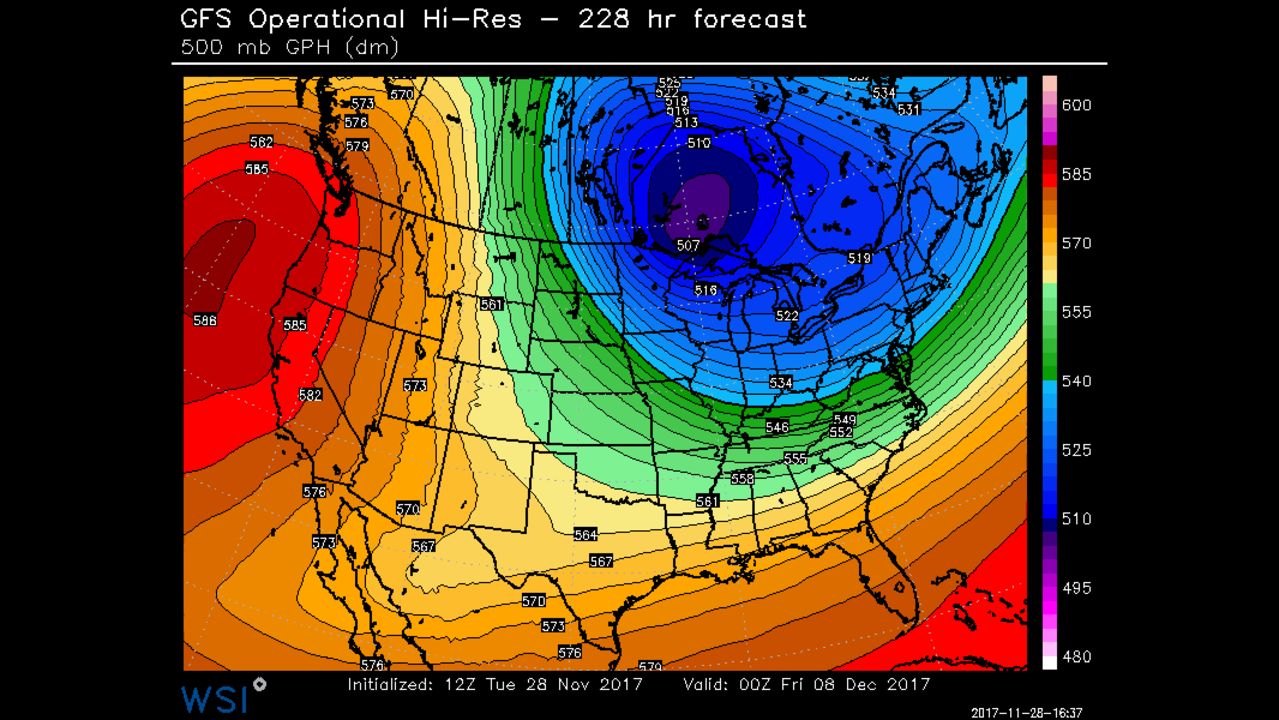