President Trump to hold 3 events in Michigan before Election Day

DETROIT – Mostly cloudy today, with highs in the mid to upper 30s (3 to 4 degrees Celsius).

Cloudy tonight, with a few light rain or snow showers dotting the area, and even some freezing drizzle possible.  North of I-69, a steadier light snow will likely develop this evening, which could leave an inch or so of accumulation.  Lows in the low 30s (-1 degree Celsius).  Northeast wind at 5 to 10 mph.

Cloudy on Friday with some light rain and snow showers possible.  Highs in the upper 30s (4 degrees Celsius).

Saturday looks to be mostly cloudy and dry for your last minute Christmas shopping, with highs in the mid 30s (2 degrees Celsius).  The weather also shouldn’t pose any problems getting to your Festivus celebrations.  Good luck with airing your grievances and with your feats of strength!  If you don’t know what Festivus is, I strongly suggest finding it on You Tube!

Mostly cloudy Saturday night, with lows in the low 20s (-6 to -5 degrees Celsius).

Sunday into Christmas Eve continues to look interesting from a weather perspective.  An upper level disturbance that is just crossing the coast into British Columbia this morning will dive down into the central plains, and head our way late Sunday into Sunday night.  It appears that some light snow is likely -- perhaps just enough to give us the coating we need to wake up Monday morning to a White Christmas!

Most of the daylight hours Sunday should be dry, but the light snow chances start late in the day.  Highs in the upper 20s (-2 degrees Celsius).  Now that the disturbance is moving over the continent, our upper air weather balloons can study its physics, and incorporate that data into the computer models -- which should develop a much better handle on it later today.

Regardless of how much snow we get Sunday night, Christmas Day will be windy and bitterly cold. Lake effect snow showers can possibly make it across the state, but the big deal will be wind chills.  Even though highs will be in the low to mid 20s (-5 degrees Celsius), the wind will make it feel like 5 degrees (-15 degrees Celsius) on your exposed skin.  The cold weather will stick around for the rest of next week.  If it’s too cold for the kids to play outside (or there’s not enough snow to play in), there are a LOT of things to do with them on their holiday break from school.  If they’re into science, try the Michigan Science Center, the Cranbrook Institute of Science, or the Ann Arbor Hands On Museum…all promise a great time.  There’s the Detroit Historical Museum to give them a taste of Detroit history.

There’s the Detroit Institute of Arts - so much to see and do there (and remember that it’s more than “just” paintings…they have medieval suits of armor, ancient Egyptian artifacts, and all sorts of neat stuff).  If they’re into music, how about taking them to the Motown Museum for some Detroit music history?

And check the Pistons and Red Wings schedules -- Little Caesars Arena is a great place to watch a game.  And while you’re downtown, take them on the new Q-Line!  Or, if you want some really cheap indoor fun with the kids, take them bowling! 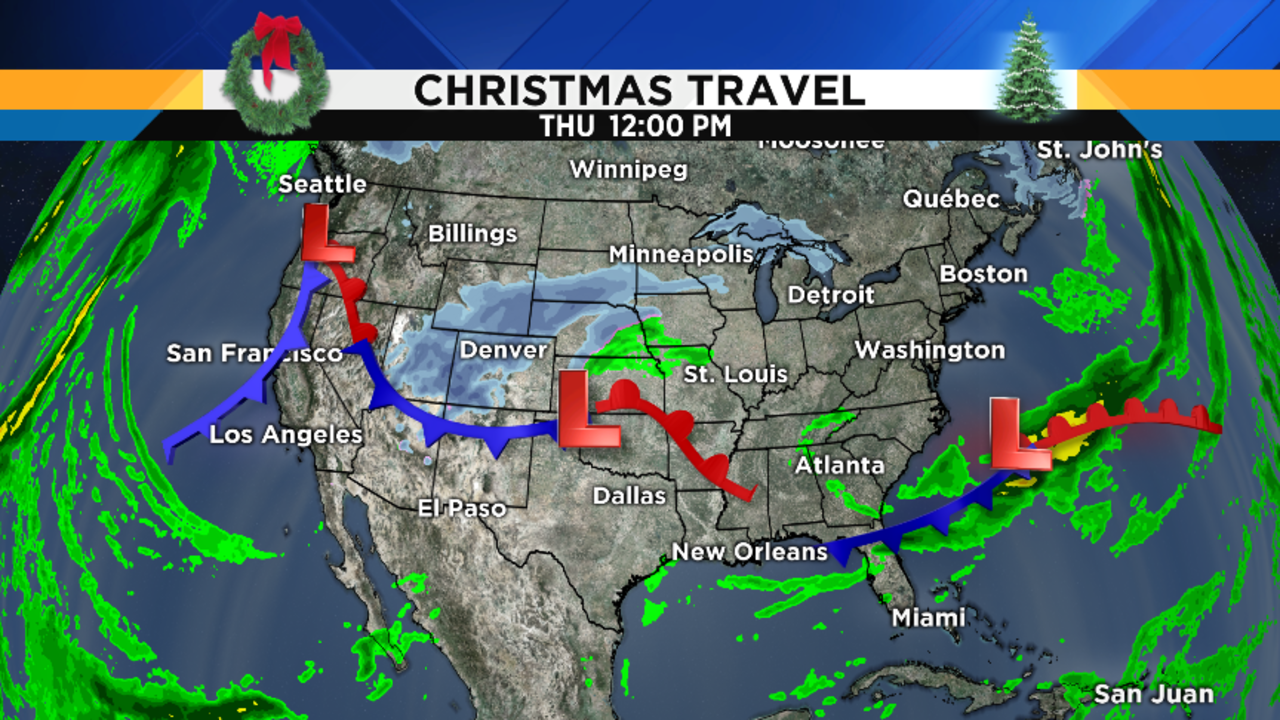 Let’s take a look at your Christmas travel weather day-by-day, starting with today.  I don’t see any major weather problems at the nation’s major hubs.  The only possible fly in the ointment is some light snow that could impact Minneapolis later today. 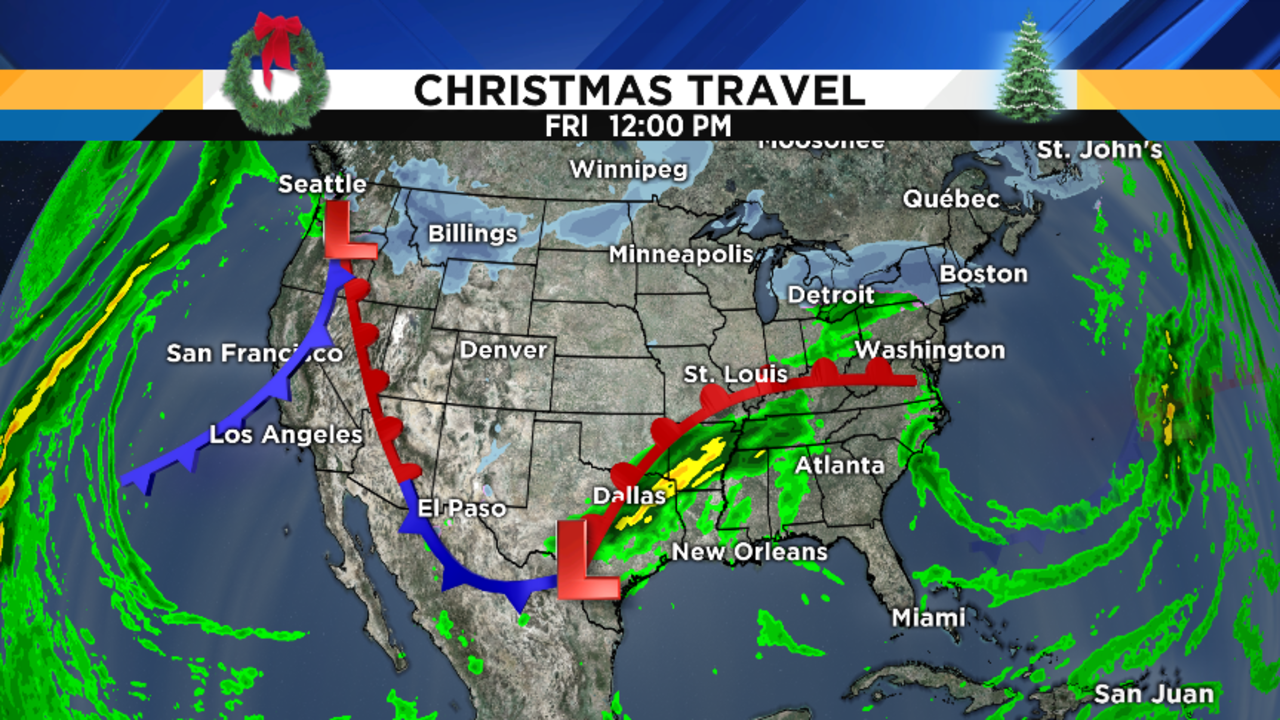 The biggest problems on Friday look to be from Dallas into the Tennessee Valley, as a developing storm system starts ingesting Gulf of Mexico moisture, resulting in some heavy rain breaking out.  In fact, there’s even the potential for a few strong to severe storms in eastern Texas.  The precipitation you see in the eastern Great Lakes looks to be light. 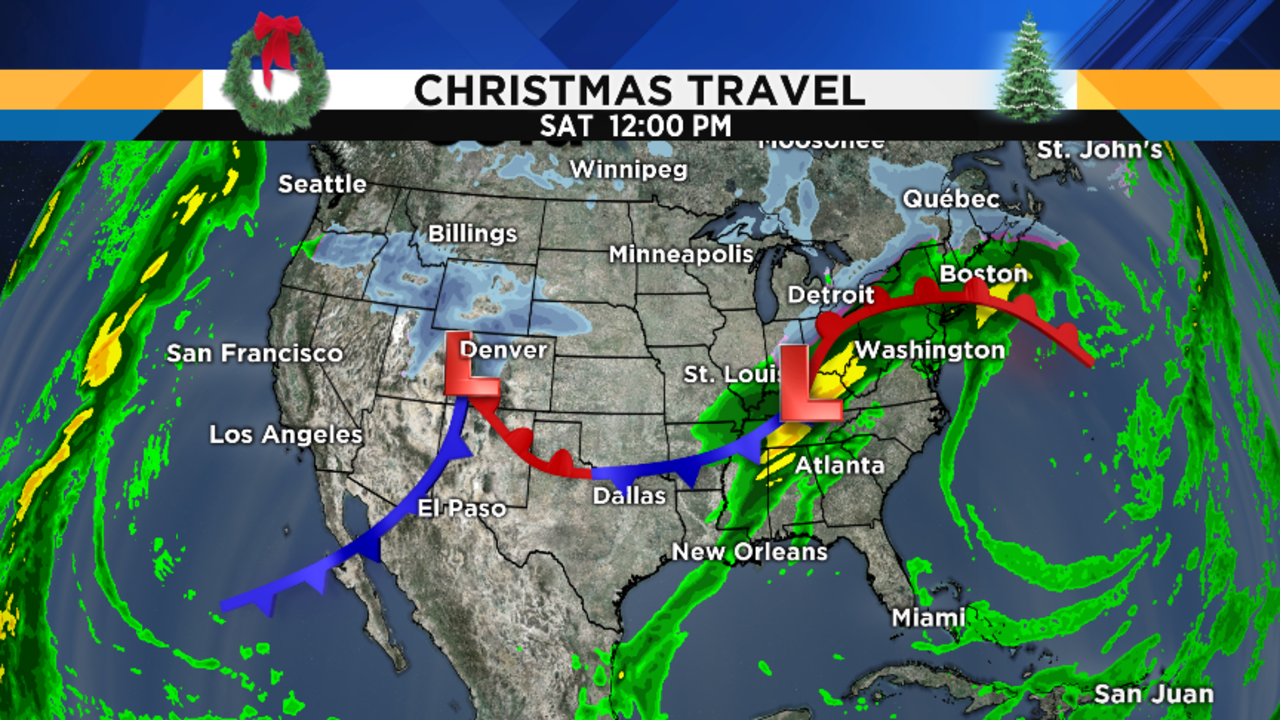 On Saturday, that storm will continue developing, and also start moving northeast.  A swath of moderate to heavy rain will extend from the deep south (where there may be some thunderstorms) all the way into New England.  Combining heavy air traffic volumes with that rain means that there could be some delays at certain parts of the day from Memphis to Cincinnati into the Newark / New York / Boston region. 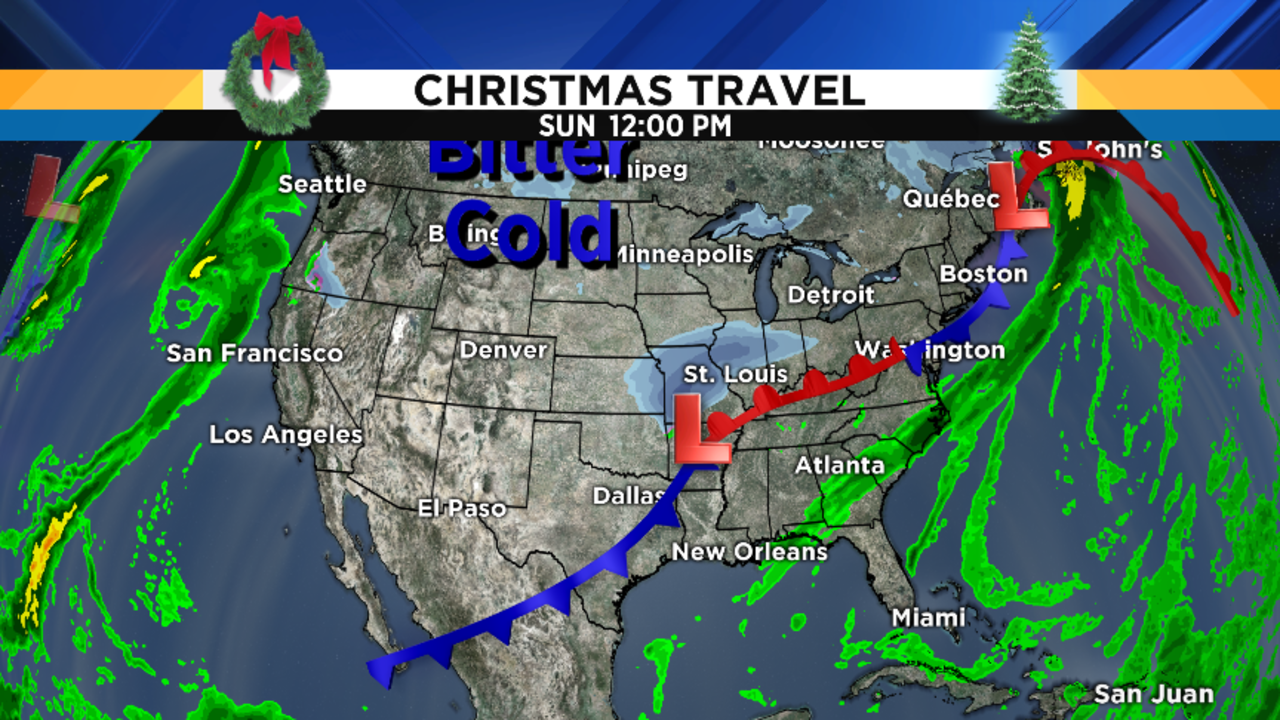 People flying Sunday morning or afternoon shouldn’t encounter too much trouble.  Snow will break out north of a secondary storm system by afternoon that possibly could impact St. Louis. 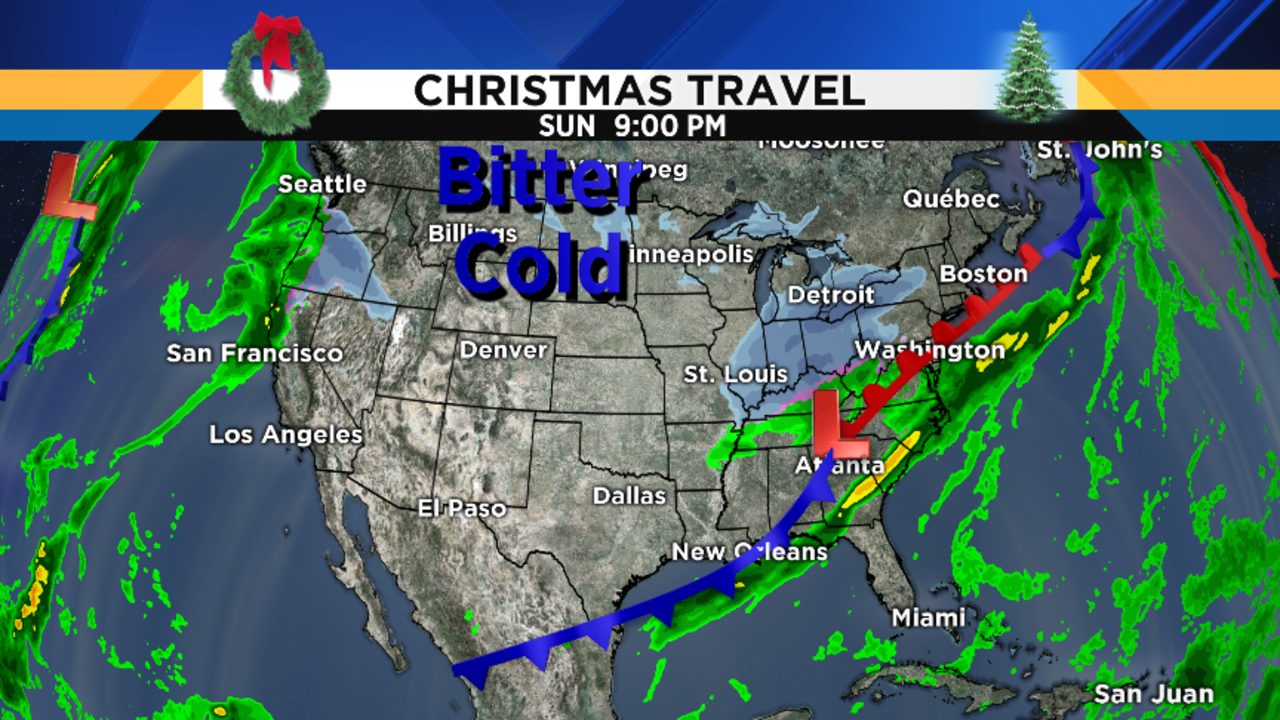 That secondary storm will continue developing, and spread some rain and thunderstorms into the mid-Atlantic region.  Farther north in the colder air, an area of snow will extend from the Ohio River area perhaps far enough north to give us a fresh coating Christmas Eve that we’ll wake up to Christmas morning.  Right now, it doesn’t look like a ton of snow for us, but this storm hasn’t even formed yet, so there’s still some margin for error to take into account. 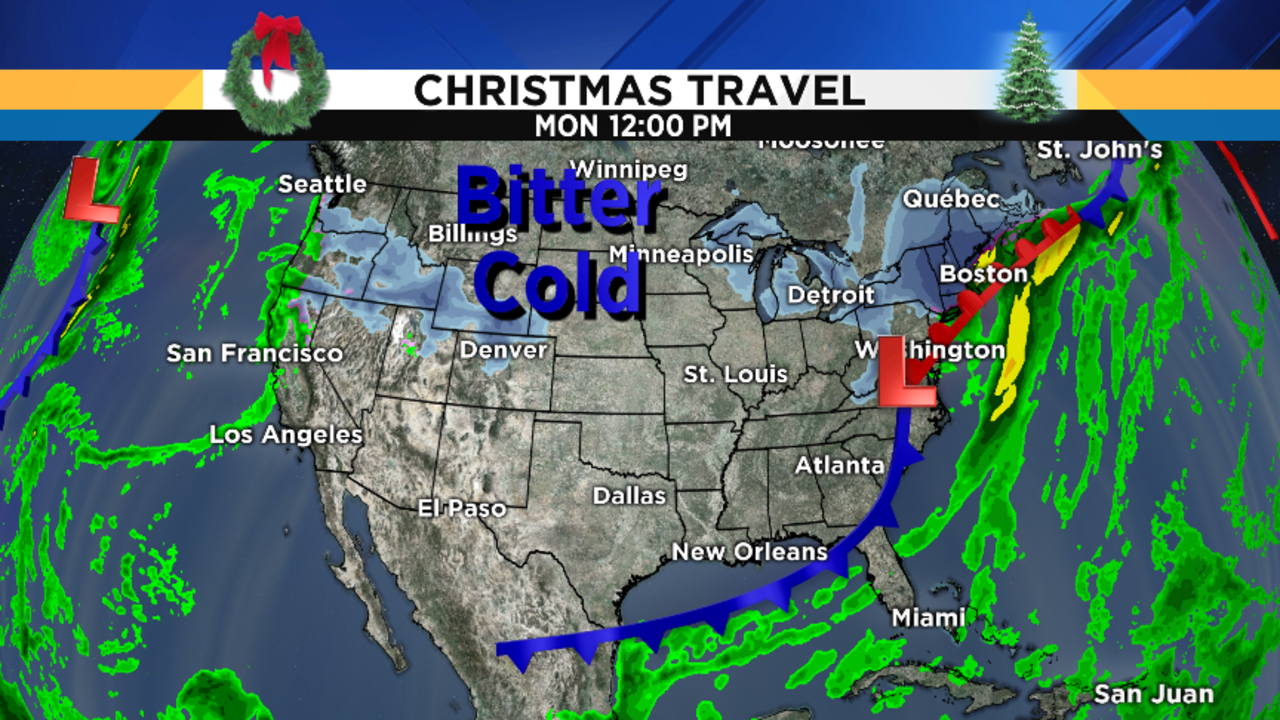 Christmas Day travel is looking like a mess for New England, with the possibility of some heavier snow.  Here in the Great Lakes, it will be windy and very cold…and those Arctic west winds flowing over the lakes will generate intense lake effect snow squalls.  These dangerous near white-out conditions will develop in bands on the eastern side of the lakes…if you are planning on driving in these areas, I suggest exploring an alternate route that keeps you away from those lake effect bands.  Rain will move into the west coast from San Francisco northward, but should cause too many problems. 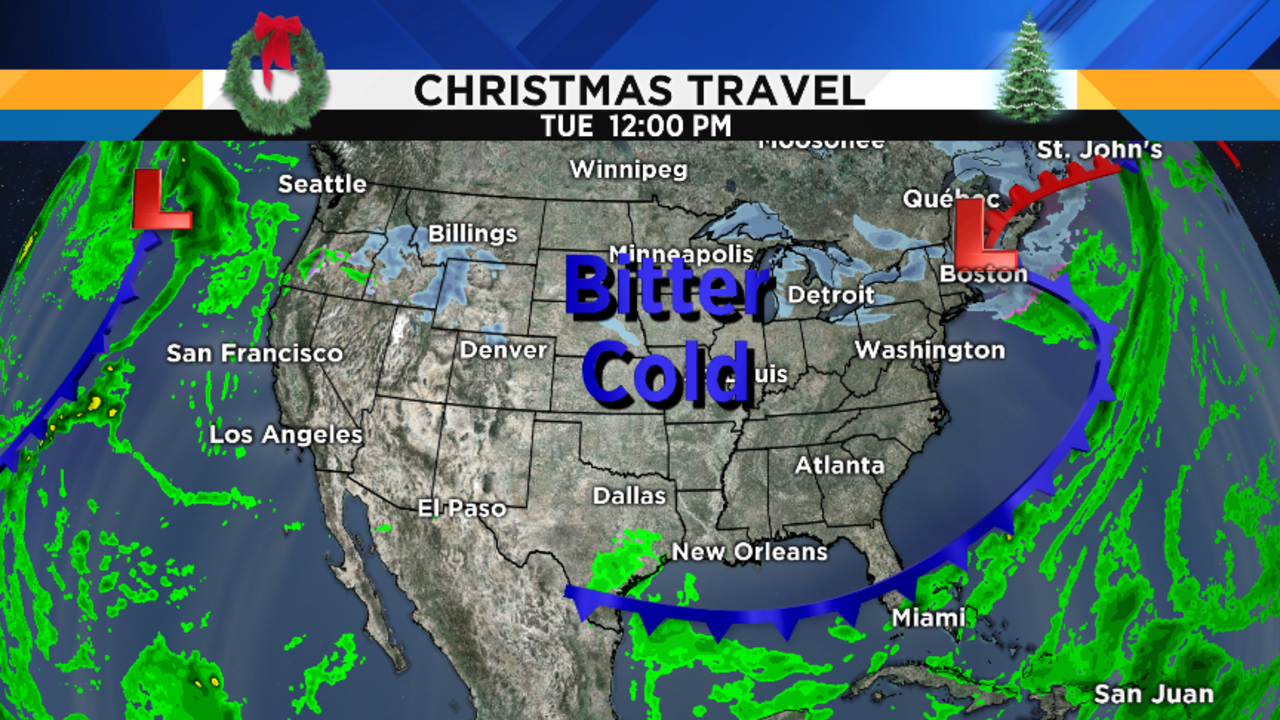 With the exception of lake effect snow squalls on the eastern side of the Great Lakes that you’ll want to avoid, most of the nation should have relatively quiet weather.  The day after Christmas is a major travel day, so this is great news…