Metro Detroit weather forecast: Final flakes for a while...

As expected, snow showers flourished across southeast Michigan this afternoon.  This activity should wane this evening, followed by partial clearing later at night.

Lows near 10 degrees (-12 degrees Celsius) in our Urban Heat Island closer to Detroit, and colder than that in rural areas.  Southwest winds, fortunately, will be light…at 4 to 7 mph…but still drop wind chills to around zero (-18 degrees Celsius) by the time kids head out to school and most of us head to work Wednesday morning.

Partly to mostly cloudy on Wednesday, with highs in the mid 20s (-4 degrees Celsius).  However, winds will increase to 10 to 20 mph, so wind chills will still be around 10 degrees (-12 degrees Celsius) even during the afternoon.  This may be a good day to get the car washed (as long as roads are dry), since we’ll have dry weather into at least the first half of the upcoming weekend.  We’ll get some value out of those car washes this time…

Partly to mostly cloudy on Thursday and breezy, with highs near 30 degrees (-1 degree Celsius).

Partly cloudy and breezy on Friday, with highs in the mid 30s (1 to 2 degrees Celsius).

Partly cloudy and breezy Saturday, with highs in the low 40s (5 to 6 degrees Celsius).

Mostly cloudy on Sunday with some light rain showers possible, and highs in the mid 40s (7 degrees Celsius).  Today’s computer models have diminished the Sunday rain threat compared to yesterday’s models, but I’m not ready to take out the rain chance altogether.  Regardless, this weekend is your opportunity to get those Christmas lights down…don’t miss the chance!

Monday will be a day of transition, as a strong cold front crosses the area.  It’ll be relatively milder with showers and even a few rumbles of thunder possible ahead of the front, followed by falling temperatures once the front passes by.  Depending upon the front’s ultimate timing, we could see some snow showers late in the day or Monday night.

As many of you know, I was in Austin, Texas last week for the American Meteorological Society’s (AMS) 98th Annual Meeting, which brings together many difference AMS specialty conferences.  Thousands of meteorologists from all across the country (and the world) attended…a tremendous gathering.  The week began on a very special note for me personally as I was named a Fellow of the AMS, citing signfiicant contributions to the science over my career.  I cannot adequately express how honored and humbled I was to receive this acknowledgement from AMS President Roger Wakimoto. 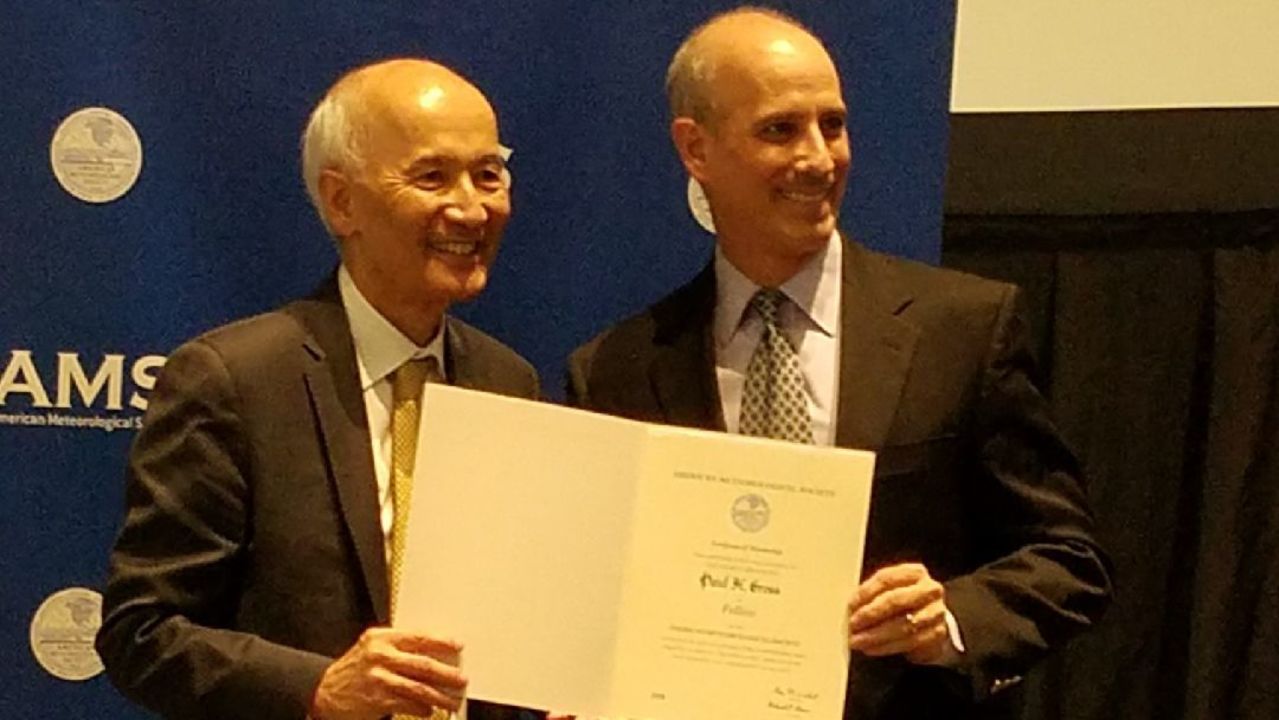 It was a pretty busy week, as I am on two committees that necessitated long meetings outside of the main body of the conference, gave a talk myself, and also participated on a panel discussion about communicating space weather to the public.  However, I still managed to attend virtually every single lecture at the particular conference I attended.  One session in particular, in which I was part of the committee that programmed it, featured two of the world’s most eminent climate scientists, Dr. Kevin Trenberth and Dr. Katharine Hayhoe, who brought us up to speed on the status of the science, as well as communicating that information.

One lecture in particular was a real eye opener:  the excessive rainfall generated by Hurricane Harvey – you undoubtedly remember those incredible floods in Houston – has been directly tied to Earth’s warming climate.  Put simply, over the past thirty years in particular, Ocean Heat Content (OHC) has rapidly increased. 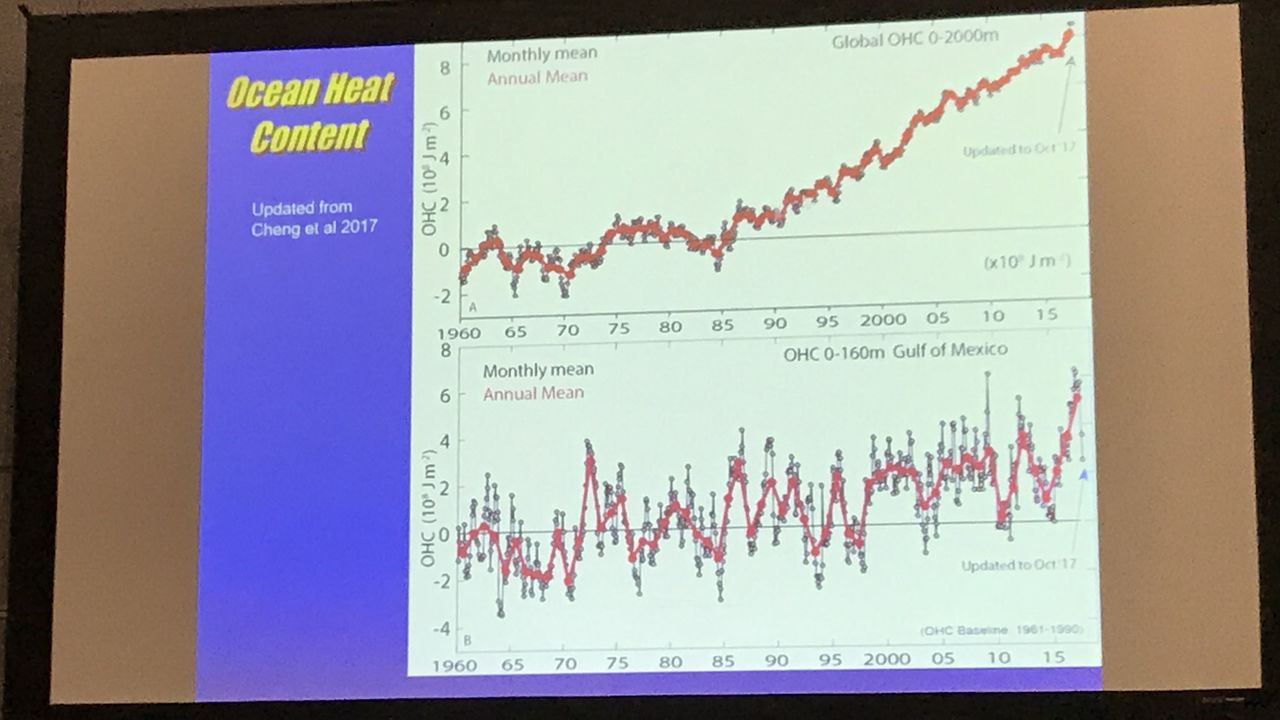 Since warm ocean waters are the fuel that drive hurricanes and provide the water vapor that these monster storms turn into rain, scientists have directly correlated the increase in OHC to the excessive rain that fell.  I want to make it perfectly clear that global warming did not cause Hurricane Harvey.  That hurricane could have developed no matter what.  However, the higher OHC essentially “juiced” the storm.  An analogy that is easy to understand is baseball players on steroids.  Barry Bonds broke Hank Aaron’s career home run record, but he did it using steriods.  Now, Bonds was a great baseball player and, even without steroids, he would have hit a bunch of home runs.  However, the steroids made him stronger, which turned what might have been some long fly balls that otherwise would have been caught, into short home runs.  The steroids did not cause Bonds to hit home runs…his hand-eye coordination did that…but the steroids caused him to hit MORE home runs.  It’s the same story with global warming…storm systems (including hurricanes) now have more atmospheric humidity to work with, resulting in more excessive precipitation events…and this includes in the winter, too.  Do you realize that six of Detroit’s all-time top eleven snowiest winters have occurred since 1981?  And five of those have occurred just since 2004!

The AMS annual meeting was an incredible educational opportunity, as well as the chance to see many close friends…and make new ones.  You never know who you’ll run into at this massive conference.  On my final day there, just before leaving for the airport, I was going up an escalator when I saw my longtime friend and colleague, Gerald Fleming, recently retired TV meteorologist from Ireland, heading down the adjoining escalator!  I didn’t even know he was in Austin! 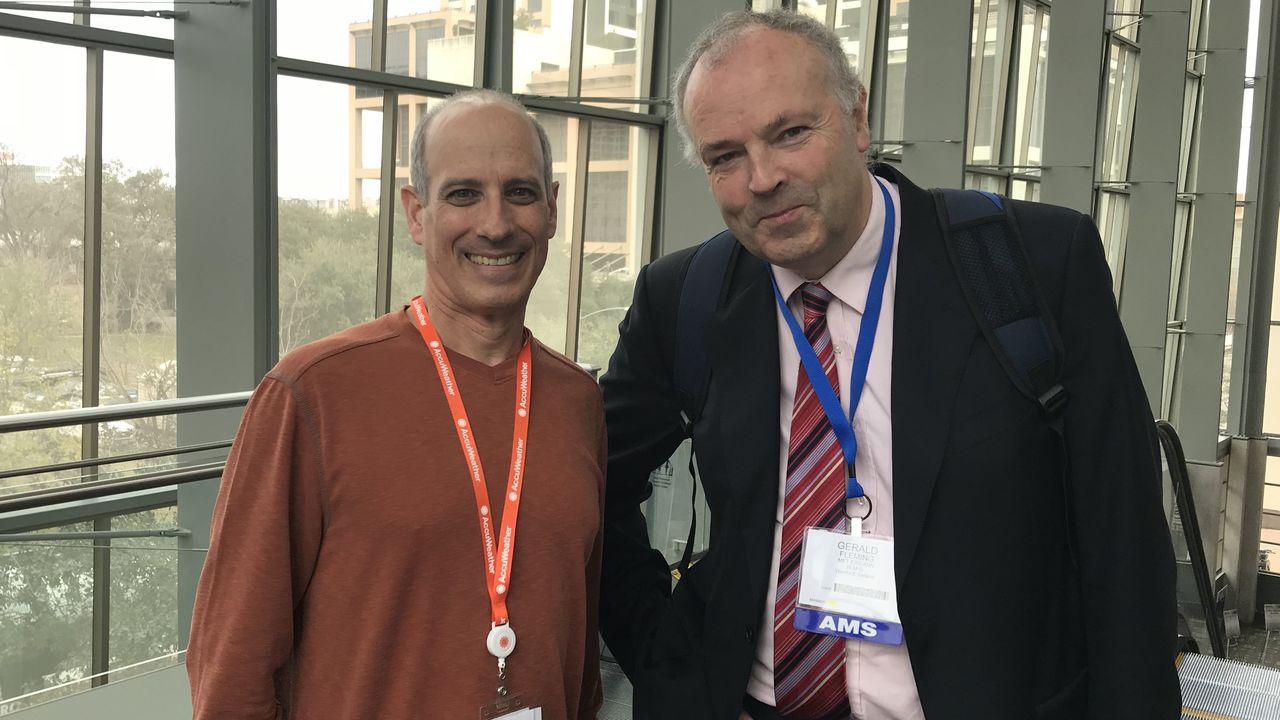 I’ve returned to Detroit happy to be home, and a whole lot smarter.