Expect More from Local 4 News at Noon. Your source for Local information & breaking news across southeast Michigan plus 4Warn Weather providing you with accurate forecasts so you can plan your day.

Tags: All About Ann Arbor

Morning 4: Missing 17-year-old Dexter student believed to be lured away from family -- and other news

Charges reissued for Warren man accused in shooting after fight between his girlfriend, her brother

I've been hard-pressed to find anyone who fiercely loves the city as much as she does, and regularly organizes events celebrating Tree Town and its residents.

She has lived here for nearly two decades and is a published author, teacher, tour guide, storyteller and event organizer. From regular storytelling events like the all-women's HERsay to Grown Folks Storytime to her sold-out Beer and History tours, Smith is in demand.

I recently caught up with her to learn how she does it all and what drives her to keep creating.

Parts of this interview have been edited and condensed.

How did you get to Ann Arbor in the first place?

"So this is the story I tell. As a kid, I had to come to University of Michigan hospital a lot because I am asthmatic. I have this memory of being in my mom’s car and driving up a road and stopping at a long stop sign, which in my mind, is South U and State. And a woman walked by with her hair dyed blue and I said, ‘I’m going to live here someday,’ because that was the coolest thing I ever saw. I was like 8 years old.

"I grew up in the suburbs and had a wonderful childhood. However, they were the suburbs, so hashtag #privilege, I was like, ‘I want to live somewhere different.’ I didn’t make it here until I was 28 and I was practicing law in the Detroit area. I've been here for 17 years. I said I will do anything to stay, and, luckily, I have been able to."

When did you stop practicing law?

"I practiced law for eight-ish years. Then, I was working part-time in law and teaching at Washtenaw Community College while I got certified to teach at Eastern. In 2007, I started teaching special education full-time."

How did you start HERsay?

"I have been storytelling for four years. I’ve always done public speaking, from high school to college, law school, practicing law and teaching. A couple of summers ago, I was on my couch and thinking there should be more storytelling opportunities in the world. I knew Tori Tomalia, who is the hero of the story. We followed each other on Twitter. I messaged her out of the blue and I was like, ‘Um, can I do a show at Pointless Brewery?’ and she was like, ‘Sure!’ We’re emailing each other and at the same time we send an email saying, ‘Wouldn’t it be cool if it was women-only?’

"So we started putting it together in August of 2016 and randomly picked a day, Nov. 10, two days after the election. I just put the call out on Facebook. I didn’t know what I was doing. We had 18 performers and the show went over three hours but no one left! It was so cool. We raised around $800 for Planned Parenthood so I got to take that donation, which was amazing.

"Tori said we should do it again, and now we have had five shows, they’ve all sold out and we’ve raised anywhere between $700-$800 each time (for various organizations, including) Corner Health Center, the Michigan Organization on Adolescent Sexual Health, this year was Planned Parenthood. One of the reasons was to get women who have not been on a stage, on stage. Because I read once that everyone should be on stage at some point and have applause. I think everyone should have that and not be judged."

How did the downtown tours start?

"So the hero of this story is my friend Tammy Coxen. Tammy runs Tammy’s Tastings and she was doing cocktail classes for Rec and Ed. When they said they needed a history person, Tammy recommended me. I met with Seema Jolly who works with Rec and Ed and asked what ideas we have. So I said we should maybe just start with a general tour of downtown. We put it up online and just by luck they liked a picture that I submitted.

"I thought I was going to have to wear a sandwich board and try to get people to go on this thing! We added a second tour which filled immediately. It was amazing. It was so incredible. I’m a high school teacher, so anytime I can talk to people and they listen to me it’s like, 'Oh my god you’re listening! You’re not on your phone.'"

How many have you done?

"I’ve done three beer history tours and then two through Rec and Ed and we’re going to do more this spring. (On the beer tour) we visit Old German, Arbor Brewing Co. and then we go to Blom Meadworks (and talk about the buildings' histories)."

When did you decide to begin writing books?

"Publishing is the most demoralizing business because you send query letters out and you just get rejection after rejection. (I figured I'd try nonfiction) because clearly fiction was not working. I queried the niche publisher The History Press and I wanted to do a story on education in Washtenaw County. They said, 'Thank you, (but) we’re not sure that would have an audience.' A couple of weeks later I heard back from them and they said, 'We were just talking about Ann Arbor. Would you want to do a book about Ann Arbor specific?' We went back and forth and settled on downtown Ann Arbor, which came out in 2014.

"From there, one of my part-time jobs was with the People’s Food Co-Op and then they hired me to do an in-house history book about the food co-op. The History Press (reached out again and) said that their ‘Forgotten’ series was doing very well. The first book was a lot of pictures and this book is a little more in depth. I’m co-writing it with my friend Britain Woodman who knows a lot about the more recent past, which is a good mix because I know a lot more about old timey Ann Arbor.

"It’s due Dec. 8 and it should be out March. It’s called 'Forgotten Ann Arbor.'"

What about your romance novel "Head Over Feet in Love"?

“The e-book launches Nov. 14. The paper book will be out in February. You can order it on Amazon. It’s my feminist romance book set in Ann Arbor, of course. And I wrote it with a character with mental health issues like me, like a lot of people.

"I wrote it because I felt that there might be a lot of people out there with bipolar disorder, depression or anxiety who really feel like they’re never going to (accomplish anything). I wrote the book to say, 'Yes, you will have a job, you will have a life, you will do things and maybe even fall in love.' Which she does." 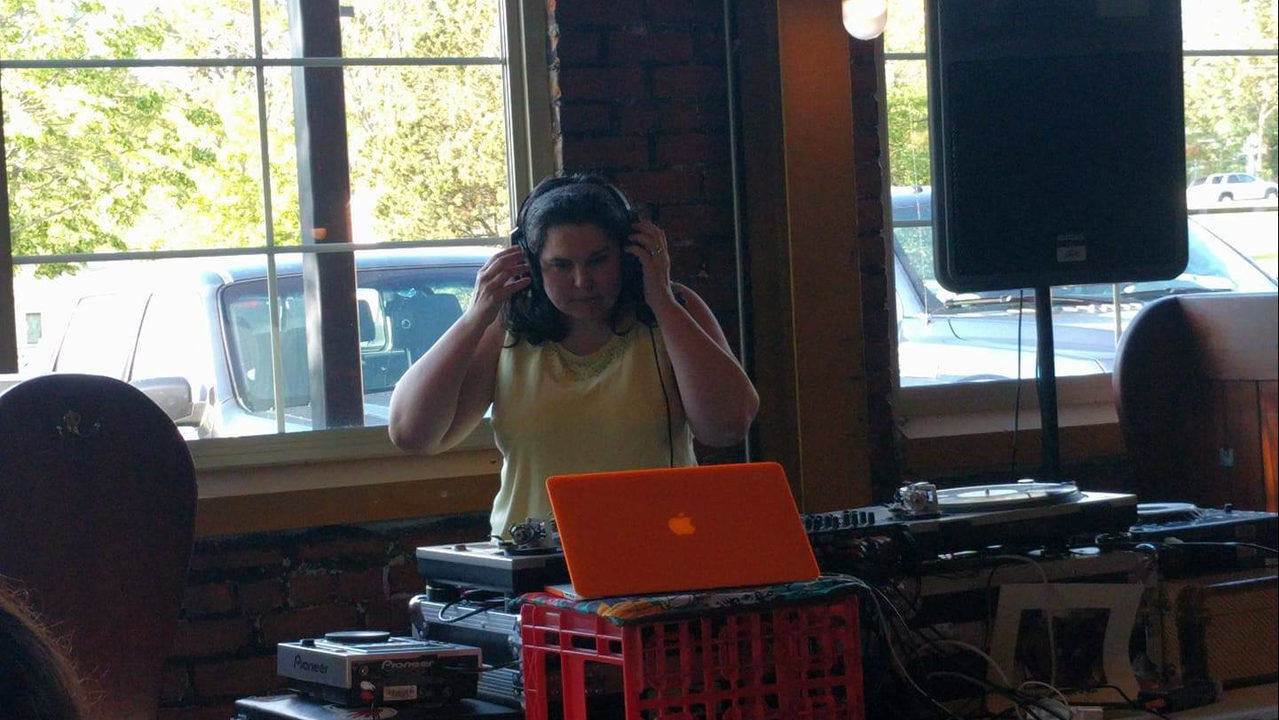 Do you think, subconsciously, the story is a reflection of your experience?

"In yet the next draft, she’s a locally published person, teaches on the side. In the final version she’s not even published. She’s a full time teacher! You can watch my dreams die with each iteration of the book (laughs).”

How do you have the time? You have a full-time job and you do all these different events, you’re a published author – how do you do it all?

"It’s interesting because these things just kind of come together. With HERsay, there are so many talented people here that you just have to put the word out. We’ve never done a dress rehearsal."

What do you love most about Ann Arbor?

"As I said in the history book -- this is what I believe -- this city takes you as you are and it finds a place for you. And I feel that way because there are so many different things going on. I grew up in the suburbs (no offense to the suburbs) but if I wanted to go to the Sierra Club meeting, I had to go to Royal Oak. If I wanted to go to the National Organization for Women group, it was in Rochester. So that is my absolute favorite thing (about Ann Arbor).

"I like the brewpub scene that we have. I’ve been hanging out at Pileated a lot. The Pointless Brewery story -- they just said, 'Let’s try this brewery and improv concept.' And it works.

"If you have an idea and you put (it) out there, it’s going to happen. And that’s not true of most places. I was doing a library talk with the first book and I was like, 'You could have the most bizarre hobby, niche thing, and there’s probably people out there who are not only excited about it but are doing it.'

"Summer here, there’s just nothing like it. I don’t like traveling because I don’t like to fly. I actually am loathed to go out of town in the summer because there’s always something going on. There are so many incredible things that you can do, even on just a regular weekend."

Do you think you’ll be here forever?

"I hope so. The recent election gives me reason to want to be in Ann Arbor and in Michigan for a minute -- I guess until they kick me out!"

Meredith has worked for WDIV since August 2017 and was voted one of Washtenaw County's best journalists in 2019 by eCurrent's readers. She covers the community of Ann Arbor and has a Master's degree in International Broadcast Journalism from City University London, UK.