Chosen by you: Scariest creatures from non-horror franchises

Thanks for the nightmares Metro Detroit

Published: October 10, 2018, 5:02 pm
Tags: 1d4 Social Media, Entertainment, 1d4
1d4 is the nerdy side of ClickOnDetroit. If you have a moment, checkout our new cyberpunk actual play podcast above. And if you enjoy gaming, anime, K-Pop and comics you can see new articles every day on clickondetroit.com/1d4 !

Sometimes the scariest creatures are from franchises that don't have a main focus on being scary. How much more unsettling is it when puppet from a kids show is just a bit off? Suddenly Tinky-Winky is staring at you with cold, dead eyes, and you're wondering what dark implications the sun/baby has.

Being scared when you're not anticipating it is it's own brand of horror. Here's some top picks from the 1d4 community.

1. Zeke the Plumber - "Salute Your Shorts"

This took some remembering, then some desperately trying to forgetting. The rhythmic slurping sound. The bizarre appearance out of nowhere. The fake face over very real eyes.

"Zeke the Plumber" appeared on a Halloween episode of the 90's gem "Salute Your Shorts." While this makes him an intentionally spooky creature, it's in a show that was never intended as a scary series, so it counts. Zeke is the invention of camper Bobby as the villain of a ghost story. Unfortunately the story is so good that it gets the other campers believing in a dream-hopping plumber who uses a cursed plunger to suck secrets out of kids' heads.

On the upside, if you're okay with your innermost secrets being revealed via megaphone, the amount of damage this malevolent spirit can do to you is limited to diseases spread with a toilet plunger.

2. The Cheshire Cat - "Alice in Wonderland"

I have always been a little terrified of the cheshire cat.

You are correct to be, Leslie. Look at this creepy dude... 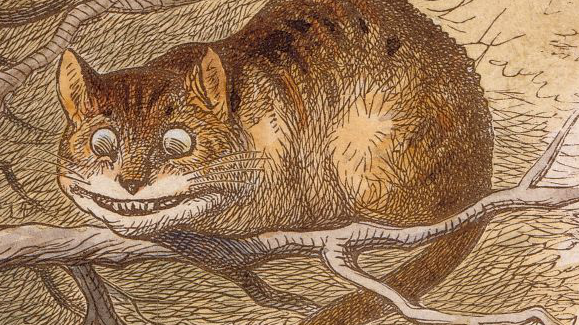 For those that don't know, the Cheshire cat is a huge, talking, sadistic cat from "Alice in Wonderland." This monster teleports at will and generally babbles nonsense at Alice.

The story's supposed antagonist, the Queen of Hearts, quite rightly sentences this thing to death. However, rather than using the aforementioned teleporting like before, it chooses to instead make its head appear without its body, so that it can't be beheaded.

The creepiest thing it does? That would have to be disappearing gradually until nothing is left but its grin. Just a straight up mouth. Floating there. Reminding you that the universe is vast, and cruel, and that your place in it is both brief and largely out of your control.

What is wrong with us? Why, for example, do we keep putting horror scenes in children's movies? Everybody remembers Gene Wilder's brief foray into absolute insanity in "Charlie and The Chocolate Factory," but a lesser mentioned and far creepier children's movie scene is the one minute and 55 seconds given to Large Marge in "Pee Wee's Big Adventure."

In the middle of this kid's movie, Pee Wee needs to hitchhike. The person that picks him up is a sullen lady driving a massive truck. She proceeds to tell young Pee Wee about the worst car wreck she ever saw. She even does an impression of the victim's face, aided by claymation that gave me nightmares. When Pee Wee wisely decides to leave, he realizes that Large Marge was in fact a ghost.

It will not shock you to learn that Tim Burton directed this.

4. Flying Monkeys and Wheelers - "The Wizard of Oz" and "Return to Oz"

The flying monkeys are the least complicated creatures on this list. According to lore, they're a species of talking, winged primate on Oz that got cursed to obey whoever is wearing a golden cap due to pulling standard monkey shenanigans on to the groom of a powerful sorceress on her wedding day. Unfortunately, that cap has been acquired by the Wicked Witch of the West, so now they're henchmen.

What makes these so terrifying that the actors- who are hindered by 1930's era makeup FX- nail it. They really look like they can cause animal-styled havoc and are motivated utterly by the magic of the cap. The crazy thing is that without having read the book, movie watchers have no idea why these creatures are so gung-ho about following the witch's commands, which makes them a hundred times more terrifying.

Maybe that's why in the sequel, they kicked it up a notch.

The above mentioned princess could get her own article, so I'm going to stay on the henchmen theme with Wheelers. Oh dear God, these things are the worst.

Imagine mixing steampunk cyborgs, killer clowns, a gang of road warriors from Mad Max and a pack of wolves. They look vaguely human. They dress in multicolored tuxedos. Instead of feet, they have rusty wheels. Instead of normal, human arms, they have super long limbs that also end in wheels.

Every time they move their wheels make a rusty-geared screeching sound. They speak English (if a bit gruffly) to their victims but they call out to each other in a shriek that sounds like steel tearing through steel.

They serve the Gnome King in Oz, and apparently that means trying to hunt and brutally destroy young Dorothy and her chicken.

Hey, no one made you read this. Sleep tight!