Southwest Detroit family concerned for its safety after shooting outside home

Remembering the day Martin Luther King Jr. debuted precursor to ‘I Have A Dream’ speech in Detroit

Why everyone should care about 'Fallout 76' (Part 2: The Big One)

Endless scandal from just one game

Published: December 18, 2018, 3:56 pm
Tags: Entertainment, 1d4 Gaming, 1d4
1d4 shows off our nerdy side. If you have a moment, check out our new cyberpunk actual-play podcast, above. And if you enjoy gaming, pop culture and comics, you can see new articles every day by clicking or tapping here.

As outside observers it can be maddening to accept that we will never know so much of the story behind events that will affect our lives. In the case of Bethesda Game Studios, many fans of their games are wondering what changed to make them what they are now, even though we were watching it happen the whole time.

Once, this company was known to be ethical, and they sold games based on the reputation they had for making business decisions that prioritized their relationship with their customers. Famously single-player games like "Morrowind," "Fallout 3," "Oblivion," "Skyrim" and "Prey" all came out during a time when there was a big push in the industry to make multiplayer games that had the potential for a larger payout in the form of microtransactions and subscription services.

During that same time DLC -- small expansions to games that sometimes included things as simple as outfit changes for the character you play -- was becoming a larger and larger part of where other games were making their money, but Bethesda continued to make it easy for the public to mod their games. Mods are fan-made DLC, and they are traditionally free.

Here's a timeline of Bethesda's fall from grace, including the introduction of paid mods. 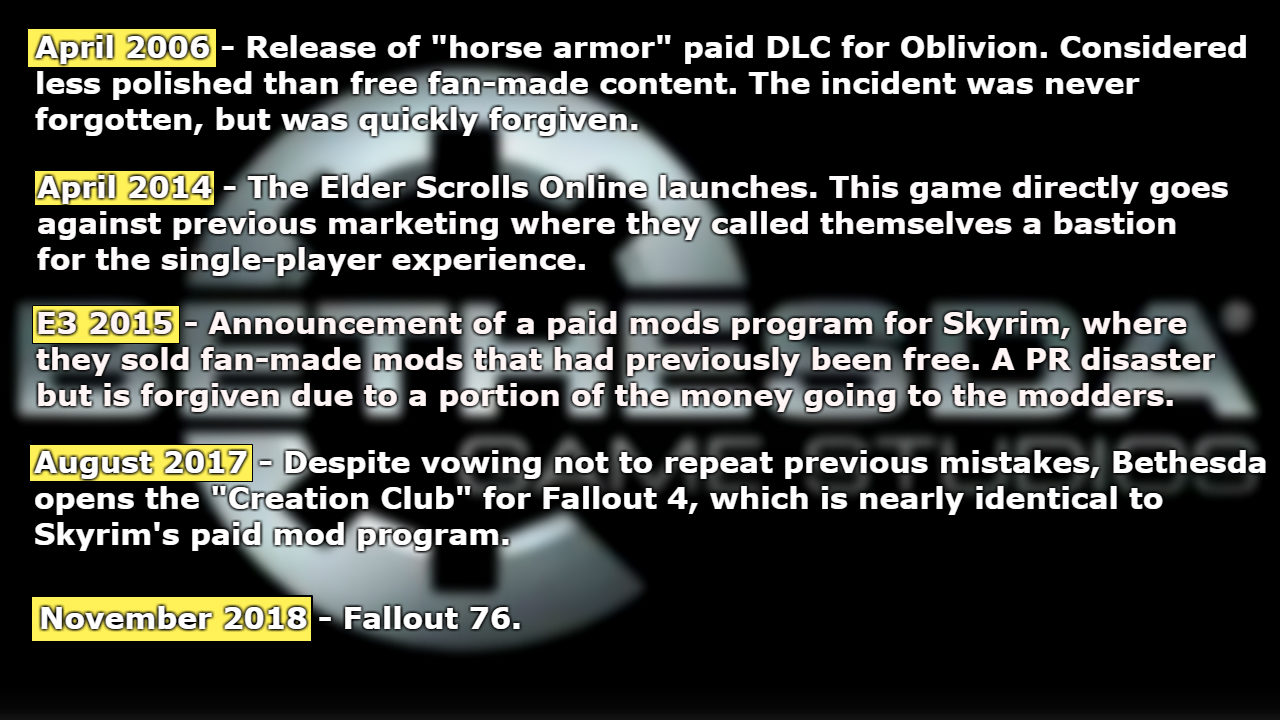 For Bethesda's entire existence an argument could be made for their decisions having -- at least in some way -- the customer's best interests in mind. They were showing an increasing tendency toward the outrageous, but there was always at least the hint of a justification, such as trying to get modders paid for their work.

"Fallout 76" was announced to juxtaposition: People in the live crowd at the announcement cheered wildly while people at home gasped in dismay. The reason for the dismay was that Todd Howard, leader of Bethesda, was telling the world that their next "Fallout" game was going to be entirely online, that there would be no human NPCS (characters in the game that require hiring expensive voice actors-) and that it would have a cash shop within that game that you've already paid for, where you can spend real money to buy more things. It was a combination of their worst scandals in a single game.

The reason for the cheering in the crowd, we would later find out, is that Bethesda filled it with its own employees.

The announcement could not have gone worse if it had been designed to fail, but most online reviewers and most fans were willing to give the game a fair chance, because it was inconceivable that Bethesda could actually be as shallow as it appeared to be.

As a group, we had apparently yet to realize that we are living in an era where things are exactly what they appear to be. The next scandal hit before the game was even released. Bethesda offered the opportunity to beta test -- play the game early and help the company by reporting any bugs or glitches you find -- "Fallout 76" to people who preordered the game.

Beta testers found a ton of bugs. Many of these were bugs that were present in "Fallout 4." They also found that "Fallout 76" looked identical to "Fallout 4," which had been released three years prior, even though in the announcement for the game Todd Howard had made improved graphics one of the selling points. In fact, the game seemed to be "Fallout 4," with the plot, NPCs and fine tuning stripped away.

Further outrage came when the game actually released. Not only were the suspicions of the beta testers confirmed, it appeared that no work had been done to fix the bugs they reported; meaning the offer to beta test the game was really just a sales ploy to get more people to preorder the game before reviews could come in.

There was about a half second where the public was confused by the fact that the very first reviews, done by "influencers" on YouTube and Twitch -- platforms popular finding video game reviews -- were all positive. That confusion instantly evaporated when people who knew about them remembered the context in which they happened.

Bethesda, in an apparent magnanimous moment, had flown out these influencers to test "Fallout 76" before anyone else could, and rewarded them with a promotional canvas bag. The moment seemed less magnanimous when realizing that these influencers had almost no experience with professionals in the industry, and that they would write off the many glitches they encountered as things that would be caught by beta testers and fixed before Bethesda actually released the game.

The influencers were charmed to be given legitimacy by a major company. They were conned into believing that it was safe to give a positive review to a seemingly broken game. They were suckers, and so were the first wave of people who bought the game.

Because "Fallout 76" is a sucker trap.

Despite all of the early copies sold, Bethesda still needs people playing this game. It is, after all, a multiplayer experience. Without others to connect to your game, it becomes half of what it was meant to be. What Bethesda was relying on for this was its fan base to stay loyal and buy a few million copies of this generation's dud, based on the good will of the past.

But this time they are finding that things are different. They have gone farther and farther with their testing of the fan base's patience, from horse armor to online games to outright lies about what their products will be. Now "Fallout 76" seems to have gone too far, and Bethesda is watching the sucker punch back.

Some people demanded a refund. They found that Bethesda had placed a "no refund" policy on this product.

Some people really don't want their copy of Fallout 76 pic.twitter.com/a0yQBA3UYT

This was only the beginning. These were the opening shots in a war between Bethesda and its once-loving fans that is still going on as we speak. These scandals were some of the biggest in the industry when they happened only a few short months ago, but they have since been utterly eclipsed by what this company has done in recent days.

Not only has it gotten worse financially; Bethesda is currently facing legal action.