Police said Caldwell-Pope was pulled over around 2:50 a.m. Wednesday on Auburn Road near Squirrel Road after being clocked driving 45 mph in a 25 mph zone.

The advanced roadside impairment officer said when he walked up to the car, he smelled alcohol. He put Caldwell-Pope through sobriety tests and placed him under arrest, police said.

Caldwell-Pope was "very cooperative" with the officer, authorities said. He was issued a ticket for DUI after a Breathalyzer test at the police station registered his blood-alcohol content at 0.08.

The incident came hours after the Pistons' Tuesday night loss to the Miami Heat, which at the time dropped them 2 1/2 games behind the Heat for the final playoff spot in the Eastern Conference. It all but squashed any hope the Pistons had at making the postseason.

It was the team's eighth loss in nine games. Caldwell-Pope shot 2-10 from beyond the 3-point line and 9-22 overall in the loss. He finished with 25 points and five rebounds in 37 minutes.

Caldwell-Pope received six citations for speeding in Georgia from 2010-2014. He received a ticket in 2015 for driving 35 mph in a 30 mph zone and not having proof of insurance in Bloomfield Hills. Last May, he was ticketed for unauthorized use of an HOV lane in Georgia. Police said there are no suspensions or major issues with his past driving record.

Caldwell-Pope, 24, is poised to sign a huge contract this offseason when he becomes a restricted free agent for the first time. He made $8,317,320 with the Pistons over his first three seasons and is making $3,678,319 in the final year of his rookie contract.

The debate over whether Caldwell-Pope deserves a max contract has gone back and forth throughout the season. The Brooklyn Nets are among the teams rumored to be interested in Caldwell-Pope this offseason.

"I know Kentavious well," Pistons owner Tom Gores said in January. "He is a hard worker. He is reliable and is improving every day. He should be a Piston. That’s just bottom line. He has what it takes to be a Piston. He was a shy kid when I met him, and he’s become a leader."

Despite his inconsistencies, Caldwell-Pope has often been the Pistons' go-to offensive option in tight, late-game situations. He loves taking the big shots, most recently evidenced Feb. 23 during a comeback win over the Charlotte Hornets.

With the Pistons down four points and 2:16 left in regulation, Caldwell-Pope knocked down back-to-back triples to pull Detroit within one. His dunk with 34 seconds left and three-pointer in the Pistons' final possession forced overtime. Another three and a pair of free throws sealed the win for the Pistons in overtime.

Caldwell-Pope has had several important late-game performances like that one, but there have also been times when he took ill-advised shots in crunch time. The Pistons don't have a better go-to option, so Caldwell-Pope has filled that role early in his career.

Caldwell-Pope was the Pistons' first-round draft pick in 2013 -- the No. 8 overall selection out of Georgia.

When Caldwell-Pope's name was announced on draft night, many fans -- particularly those wearing Maize and Blue -- were unhappy with the selection. University of Michigan star point guard Trey Burke was available at No. 8, and was a month removed from carrying the Wolverines to the national championship game and being named national college player of the year.

The Pistons instead selected the lesser-known SEC player in Caldwell-Pope. When Burke averaged 12.8 points and 5.7 assists per game for Utah and was named to the NBA All-Rookie First Team in 2014, the comparisons to Caldwell-Pope were part of the package that toppled Joe Dumars from his position as president of basketball operations.

But in the three years since, Caldwell-Pope has silenced those critics, passing Burke in nearly every facet of the game. This season, Caldwell-Pope averages 9.4 more points, 2.4 more rebounds and 0.9 more assists than Burke, though Burke shoots much higher percentages from the floor (averaging just 12.1 minutes per game for the Wizards).

Caldwell-Pope has shown marked improvement throughout his first four years, especially in terms of 3-point shooting and passing. As the end of his best season as a pro draws near, his 3-point and free-throw percentages are well above his career marks and he's posting career high per-game averages in points (15.1) and assists (2.8).

Caldwell-Pope was born in Thomaston, Georgia and went to high school in Greenville, Georgia. As a senior at Greenville High School, Caldwell-Pope was named a McDonald's All American and a five-star recruit, according to 247 Sports. 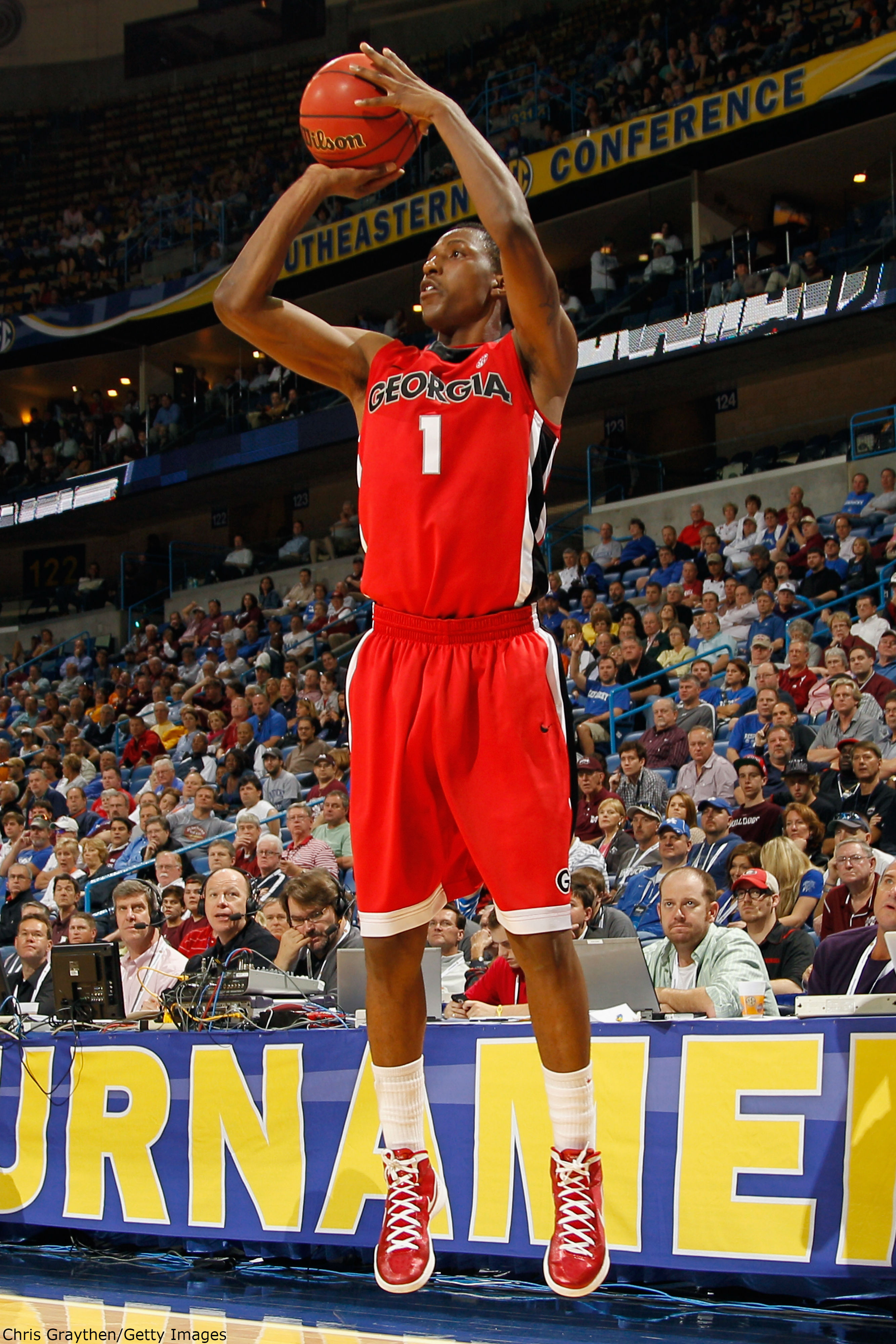 As the No. 2 shooting guard in the class, Caldwell-Pope had scholarship offers from Georgia, Florida State and Tennessee. He ultimately decided to stay home and play for the Bulldogs, committing on April 30, 2011.

He made an instant impact as a freshman, scoring 13.2 points and grabbing 5.2 rebounds per game. Caldwell-Pope was named to the SEC All-Freshmen Team, but his shooting percentages needed improvement and he returned to Georgia for his sophomore season.

The decision paid off, as Caldwell-Pope upped his averages to 18.5 points and 7.1 rebounds per game en route to being named the SEC Player of the Year. He also improved his shooting by 3.7 percent, his three-point shooting by 6.9 percent and his free-throw shooting by 14.5 percent.

Caldwell-Pope never played in a true postseason tournament, though he did win a game in the 2012 SEC Tournament against Mississippi State.

The Pistons have six games remaining on their schedule after Thursday night's win over the Brooklyn Nets.

Caldwell-Pope scored 12 points Thursday night on five of 14 shooting. He also contributed three rebounds and two assists in the win.

Detroit is still 2.5 games behind both Miami and Indiana, the two teams sitting in the seventh and eighth slots in Eastern Conference.

Here's a look at the Pistons' remaining schedule: