Temperature fluctuations are most often to blame for ruining roads and adding to Michigan’s pothole problem.

How a pothole forms

Potholes are the result of a freeze-thaw effect.

When water gets into the cracks of the pavement, it can get in the soil below the road. When the water freezes, it expands and pushes up on the pavement.

According to the Michigan Department of Transportation, the pavement often remains raised with a gap between it and the soil. When a vehicle drives over the pavement, it is pushed down and a pothole forms.

If a crack already exists, the freezing and thawing of the water will make the crack larger and weaken the pavement.

According to pothole.info, water expands to almost 10 percent of its normal volume when it freezes. 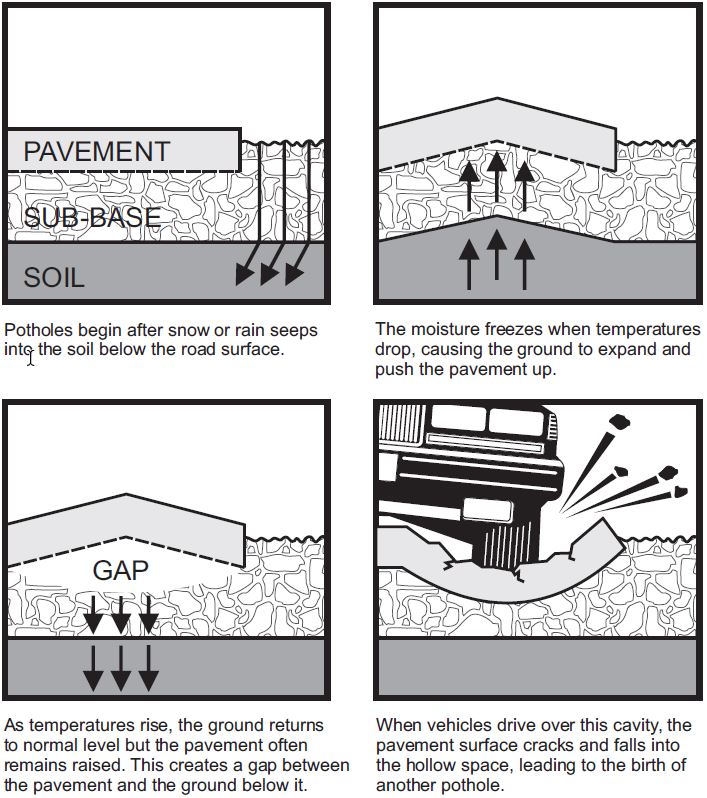 Why potholes form when they do

Potholes are more likely to occur when snow and ice are melting, as the cracks in the pavement will have water in them that will freeze if temperatures drop below freezing again.

Spring is a prime time for potholes to form in Michigan because the temperatures are both below and above freezing.

Typically, October and March provide the perfect weather conditions for pothole formation, according to pothole.info. These conditions can also be present in other months, though, if the weather gets warmer or colder than usual.

Where are the worst potholes in southeast Michigan? ClickOnDetroit is collecting responses from drivers. Tell us about the worst roads below, and be specific: