COVID-19 deaths in early months of pandemic might have been underestimated by nearly 30%, study says

Coronavirus in Michigan: Here’s what to know July 3, 2020

DETROIT – When the beat drops in downtown Detroit, even the people in Windsor can hear it.

Tens of thousands of electronic dance music enthusiasts will descend on Hart Plaza to see over 100 local and international artists perform Memorial Day weekend at the 2016 Movement Electronic Music Festival.

Across six stages in Hart Plaza, some of the best DJs will perform drawing electronic music fans from all over the world.

Mayor Mike Duggan proclaimed May 23-30 to be Detroit Techno Week on Monday signing a certificate of recognition and setting the tone for the week leading up to one of the world’s most recognized electronic music festivals.

“I encourage all to come out and celebrate the festivities as it creates local and international awareness of Detroit’s rising creative culture,” Duggan said.

But prior to the festival's existence, Detroit is where techno music was born and it started with the "Belleville Three."

Kevin Saunderson, 52, moved to Belleville, Mich. at the age of nine from Brooklyn, New York, and attended Belleville High School where he met Derrick May, 52, and Juan Atkins, 53.

They are widely considered the creators of Detroit techno.

As teenagers, the Belleville Three were fans of local radio DJ Charles “The Electrifying Mojo” Johnson and synthesizer-driven bands like Kraftwerk, who performed Saturday on the Movement Main Stage.

Atkins began recording with Cybotron in 1981 and working with May on sets as Deep Space, taking them to The Electric Mojo who played them on the air.

Saunderson studied telecommunications and played football at Eastern Michigan University before joining Atkins and May in their music careers.

Listen to Kevin Saunderson Deep Space Radio in 2014 below:

More recently, Atkins taught classes at the Detroit Institute of Music Education. He did an interview last summer on Live in the D and talked about his class, Spin Masters 101: DJ Crash Course.

Just weeks later, May discussed his teaming up with the Detroit Symphony Orchestra for a concert in Chene Park on Live in the D.

May collaborated with conductor and music director Dzijan Emin to transcribe May's collective works into musical notation for orchestra.

Both interviews are available below:

Atkins performed with Mortiz Von Oswald presenting their collaborative project Borderland on Saturday on the Movement Main Stage. Saunderson will be playing Sunday at 10:30 p.m. on the Made In Detroit stage, closing the concert for the weekend.

The first year was a major success with performances by each of the Belleville Three as well as The Roots, Mos Def, Richie Hawtin and the Detroit Grand Pubahs.

In 2003, May took over and the festival became Movement.

For a brief year, the festival was called Fuse-In. Local 4's coverage of the 2005 event shows the festival in its infancy and includes a short interview with Saunderson. It was the first year the festival didn't have free admission, charging $10 for day passes and $25 for the weekend.

Three-day general admission passes this year are $175 and individual day passes are $85.

Production company Paxahau took over in 2006 and the festival has been known as Movement Detroit Electronic Music Festival ever since, drawing big names and consistently creating a better experience every year.

The festival runs from noon to midnight, but that doesn't mean the music stops in the city.

After parties extend into the early morning hours as Hart Plaza prepares to reopen for another day of music. From the Masonic Temple to the Leland Ballroom, sold out shows are playing through night.

A long day of dancing can require a great deal of stretching and after a long night of after parties, attendees can participate in Movement Yoga to renew themselves throughout the festival weekend and rejuvenate before heading back to the dance floor.

The Detroit Yoga Lab is offering free one-hour yoga sessions on Sunday and Monday on the Opportunity Detroit Stage. The group sessions begin at 12:30 p.m. and are led by two of Detroit’s top yoga instructors, Najee Robbins and Imani Smith, featuring music by Jon Zott.

Free mats will be provided by Lululemon on a first-come first-served basis, but participants are encouraged to bring their own mat or a towel.

Industry leaders in electronic music production and performance hardware and software will be presenting and providing product demonstrations, workshops and hands-on interactions at the Technology Area, located in the Hart Plaza underground, adjacent to the Movement Main Stage and the Underground Stage.

The event will have a number of food options including Delectabowl, Andiamo, and The Pita Post, among others.

Lockers and cell phone charging areas are available and can be reserved online.

A smartphone app is available for both iOS and Android users with artist bios and information about the festival.

The festival is played out across six stages in Hart Plaza, stretching from the riverfront to Jefferson Avenue and each stage has their own schedule. They include the Movement Main Stage, Red Bull Music Academy Stage, Beatport Stage, Underground Stage, Made in Detroit Stage presented by Thump and the Opportunity Detroit Stage. 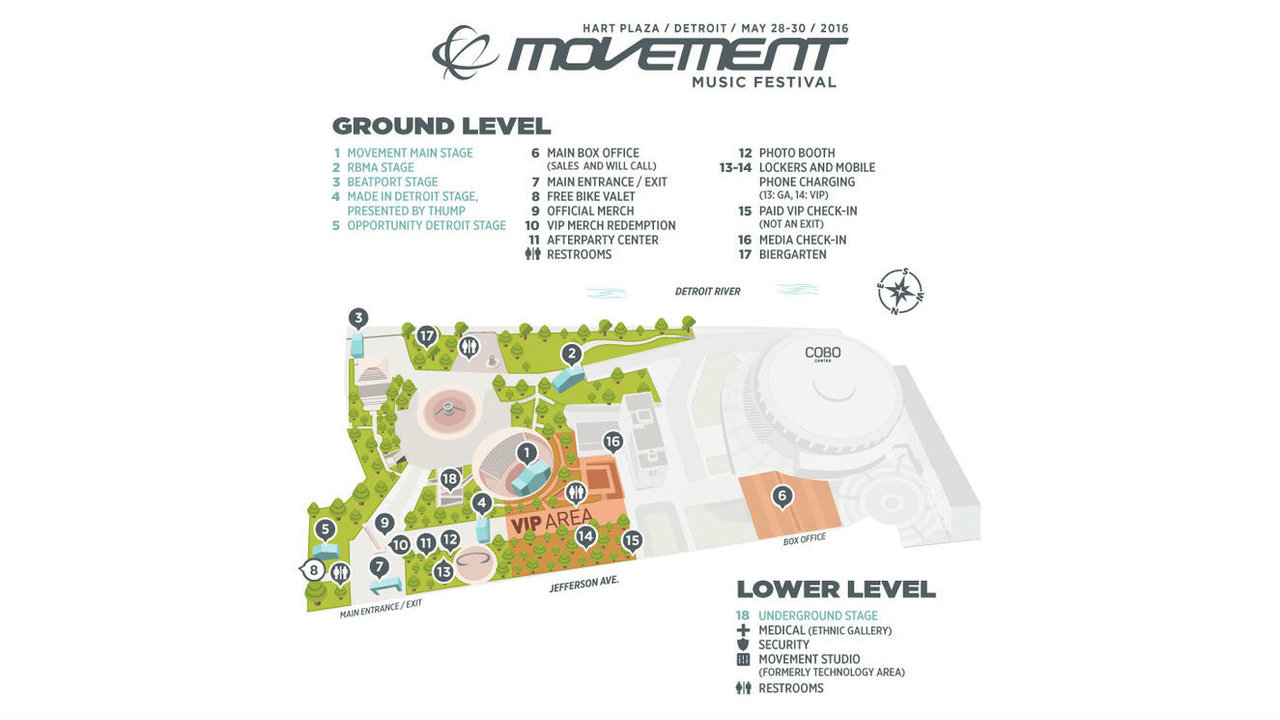 Phase I of the 2016 Lineup was announced in January and has since grown into a massive list of over 100 local and international artists.

The full 2016 Movement Electronic Music Festival Lineup is below:

The festival begins each day at noon and ends at midnight.

The will call and sales box office is located in the outdoor plaza in front of the Cobo Convention Center, directly west of Hart Plaza at Jefferson Avenue and Washington Boulevard.