What’s the difference in storm types for Ian & how did the original forecasts compare to landfall?

Filtered sunshine on tap for Metro Detroit this weekend

Brown recluse spiders are not typically found in Michigan, but a number of them have popped up in the state this year.

According to Michigan State University's Department of Entomology's Howard Russell, Brown recluse spiders have been found in at least 10 Michigan counties:

Russell wrote in a blog on MSU Extension that many people send in photos of what they think are brown recluse spiders, but many turn out to be other spiders. Two recently reported brown recluse bites -- one in Lelanau County and one Ottawa County -- did not recover the actual spiders, so don't make the map of confirmed sightings.

"In the past 14 months, over 700 Michiganders have sent me photographs of spiders thought to be recluse spiders they had encountered in their homes and yards. Some people just sent stories about bites thought to be recluse bites. Some of these stories were profoundly heart-wrenching," Russell posted. "Of these 700 spider photos, only seven turned out to be of brown recluse spiders."

Russell says none of the spiders found walked here - they hitched a ride.

What to know about brown recluse spiders (Via Pest World)

Brown recluse spiders are nocturnal and eat other small bugs like cockroaches and crickets. These spiders spin irregular webs, which are not used for catching prey but rather as a retreat.

Brown recluse spiders often live outdoors where they are typically found around rocks, utility boxes and woodpiles. Indoors, brown recluses can be found in any undisturbed area, such as inside boxes, among papers, in seldom-used apparel and shoes, under furniture or in crevices of window moldings. Closets, attics, crawl spaces and basements are the most common brown recluse spider hiding spots.

Color: Light to dark brown, with characteristic dark brown violin marking on back

Region: Found in the south central Midwest from Ohio to Nebraska and south through Texas to Georgia 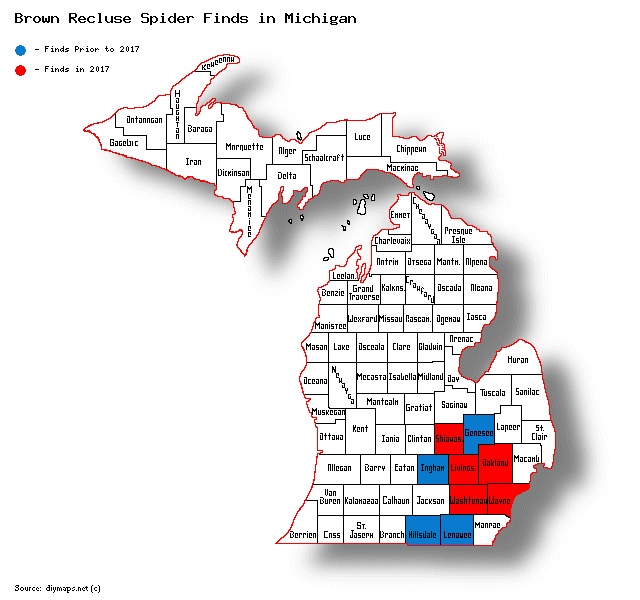