Floridians should be used to hurricanes by now.

The "Sunshine State" has been hit by dozens of the late summer storms, some of which have been deadly with devastating impacts on the region.

Here are some of the most notable hurricanes to hit Florida in the past century, according to the National Hurricane Center (NHC):

All images are courtesy www.nhc.noaa.gov. 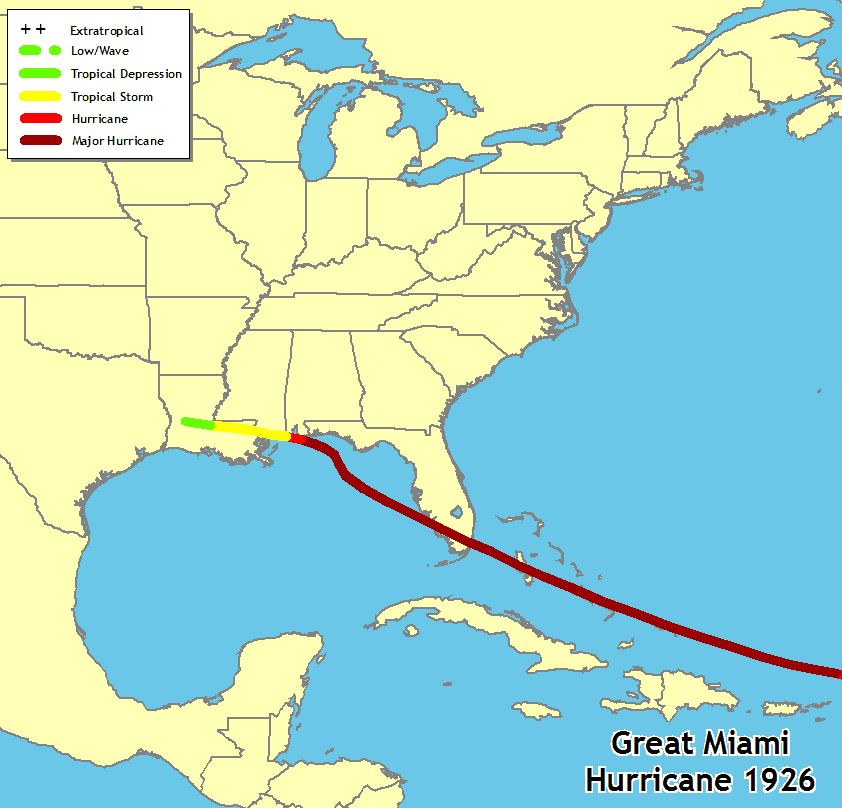 According to the National Hurricane Center's historical report, the "Great Miami" Hurricane formed as a tropical wave located 1,000 miles east of the Lesser Antilles on Sept. 11, 1926.

"The system moved quickly westward and intensified to hurricane strength as it moved to the north of Puerto Rico on the 15th. Winds were reported to be nearly 150 mph as the hurricane passed over the Turks Islands on the 16th and through the Bahamas on the 17th. Little in the way of meteorological information on the approaching hurricane was available to the Weather Bureau in Miami. As a result, hurricane warnings were not issued until midnight on September 18th, which gave the booming population of South Florida little notice of the impending disaster.

The Category 4 hurricane's eye moved directly over Miami Beach and downtown Miami during the morning hours of the 18th. This cyclone produced the highest sustained winds ever recorded in the United States at the time, and the barometric pressure fell to 27.61 inches as the eye passed over Miami. A storm surge of nearly 15 feet was reported in Coconut Grove. Many casualties resulted as people ventured outdoors during the half-hour lull in the storm as the eye passed overhead. Most residents, having not experienced a hurricane, believed that the storm had passed during the lull. They were suddenly trapped and exposed to the eastern half of the hurricane shortly thereafter. Every building in the downtown district of Miami was damaged or destroyed. The town of Moore Haven on the south side of Lake Okeechobee was completely flooded by lake surge from the hurricane. Hundreds of people in Moore Haven alone were killed by this surge, which left behind floodwaters in the town for weeks afterward." 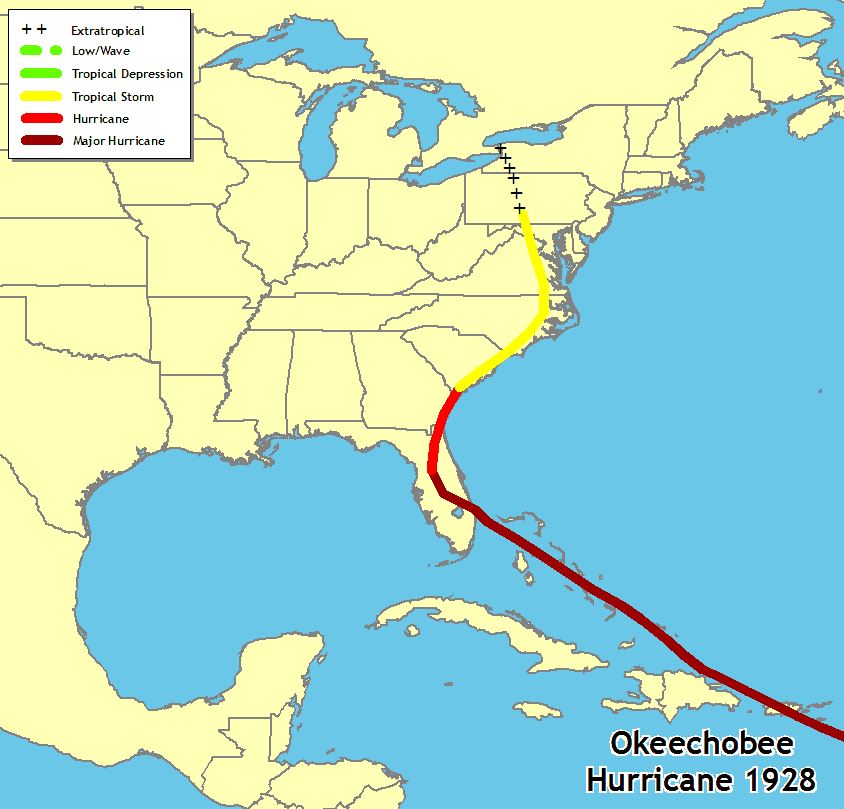 This 1928 hurricane caused the Lake Okeechobee banks to overflow. The NHC's records say this one "moved westward through the Leeward Islands on the 12th."

"It then turned west-northwestward, scoring a direct hit on Puerto Rico on the 13th (the feast of San Felipe) as a Category 4 hurricane. 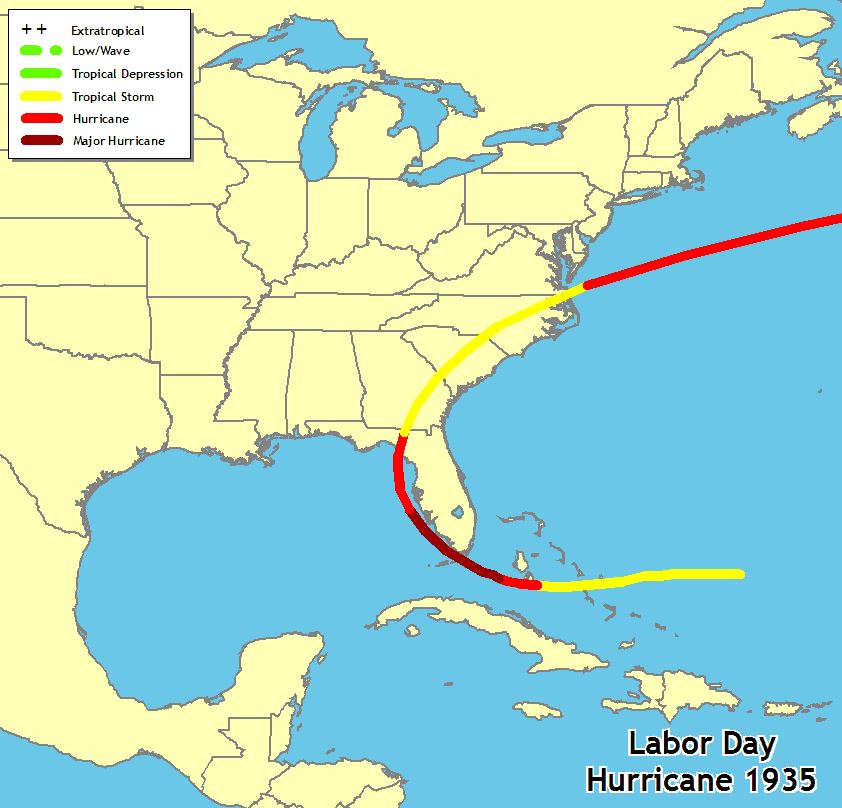 This one hit Aug. 29, 1935. It hooked around the southern tip of Florida and back toward Georgia and the Carolinas.

"It continued into the Atlantic, becoming extratropical on the 7th and last being detected on the 10th.

No wind measurements are available from the core of this small, but vicious hurricane. A pressure of 26.35 inches measured at Long Key, Florida makes this the most intense hurricane of record to hit the United States and the third most intense hurricane of record in the Atlantic basin (surpassed only by the 26.05 inches in Hurricane Wilma in 2005 and 26.22 inches observed in Hurricane Gilbert in 1988).

The combination of winds and tides were responsible for 408 deaths in the Florida Keys, primarily among World War I veterans working in the area. Damage in the United States was estimated at $6 million." 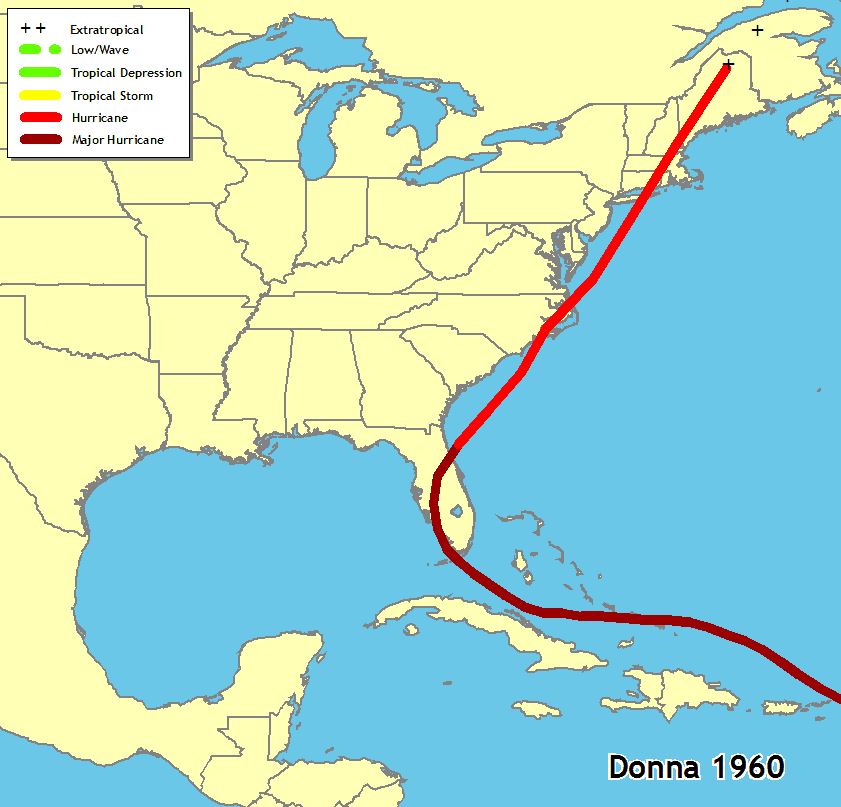 The United States started using female names to identify hurricanes in 1953, according to the National Ocean Service. Hurricane Donna is described as "one of the all-time great hurricanes" by the NHC. She started as a tropical wave off the African coast on Aug. 29, 1960. Then Donna kept growing, and growing.

Donna was so strong by the time she reached the United States that she remains "the only hurricane of record to produce hurricane-force winds in Florida, the Mid-Atlantic states, and New England."

"Donna caused storm surges of up to 13 ft in the Florida Keys and 11 ft surges along the southwest coast of Florida. Four to eight ft surges were reported along portions of the North Carolina coast, with 5 to 10 ft surges along portions of the New England coast. Heavy rainfalls of 10 to 15 inches occurred in Puerto Rico, 6 to 12 inches in Florida, and 4 to 8 inches elsewhere along the path of the hurricane. 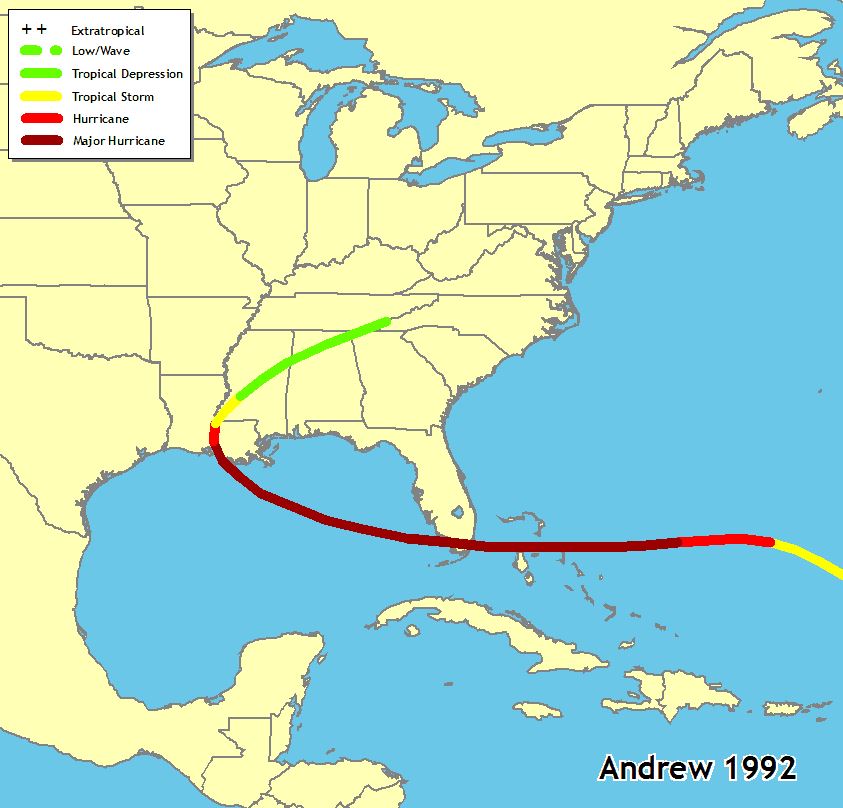 The infamous Hurricane Andrew hit Florida on Aug. 24, 1992 as a Category 4 storm. Andrew moved across the tip of Florida to Louisiana.

Andrew produced a 17 ft storm surge near the landfall point in Florida, while storm tides of at least 8 ft inundated portions of the Louisiana coast. Andrew also produced a killer tornado in southeastern Louisiana. 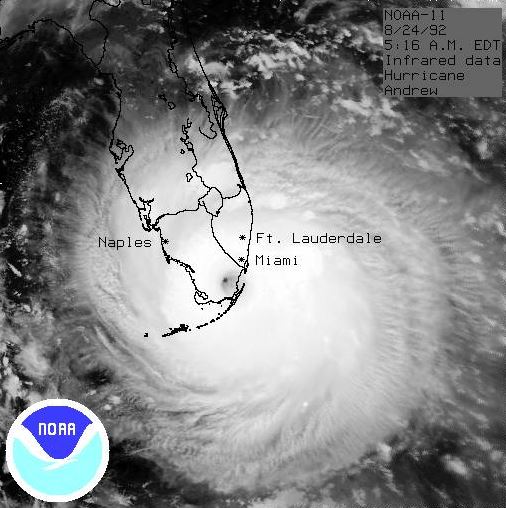 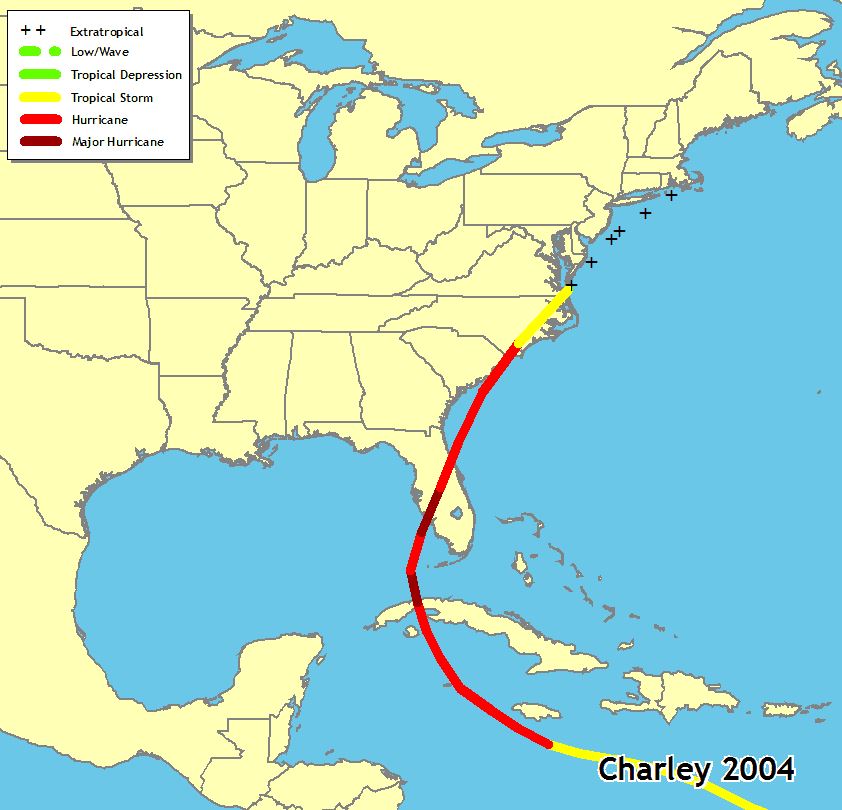 The NHC describes Charley as "ferocious," but "a very small hurricane at its Florida landfall." That landfall was on Aug. 13, 2004. Charley moved eastward across the state of Florida, went back out to sea and returned to land in the Carolinas.

"The hurricane turned north-northeastward and accelerated toward the southwest coast of Florida as it began to intensify rapidly; dropsonde measurements indicate that Charley's central pressure fell from 964 mb to 941 mb in 4.5 hours. By 10 am, the maximum winds had increased to near 125 m.p.h., and three hours later had increased to 145 m.p.h. - category 4 strength. Charley made landfall with maximum winds near 150 m.p.h. on the southwest coast of Florida just north of Captiva Island around 3:45 pm. An hour later, Charley's eye passed over Punta Gorda. The hurricane then crossed central Florida, passing near Kissimmee and Orlando. Charley was still of hurricane intensity around midnight when its center cleared the northeast coast of Florida near Daytona Beach. After moving into the Atlantic, Charley came ashore again near Cape Romain, South Carolina near midday on the 14th as a category 1 hurricane." 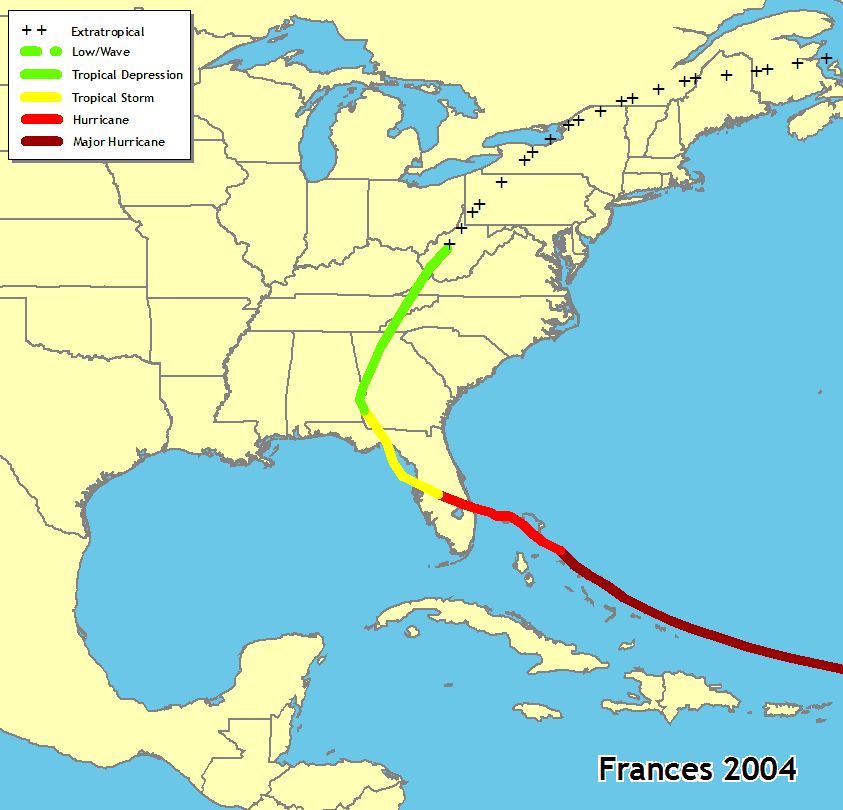 Frances' path was similar to Donna's, but it was much weaker as it moved across Florida in September 2004.

"Frances produced a storm surge of nearly 6 feet at its Florida east coast landfall, and caused widespread heavy rains and associated freshwater flooding over much of the eastern United States, with a maximum reported rainfall of 18.07 inches at Linville Falls, North Carolina. Frances was also associated with an outbreak of over 100 tornadoes throughout the southeastern and mid-Atlantic states. Eight deaths resulted from the forces of the storm - seven in the United States and one in the Bahamas. U.S. damage is estimated to be near $8.9 billion, over 90% of which occurred in Florida." 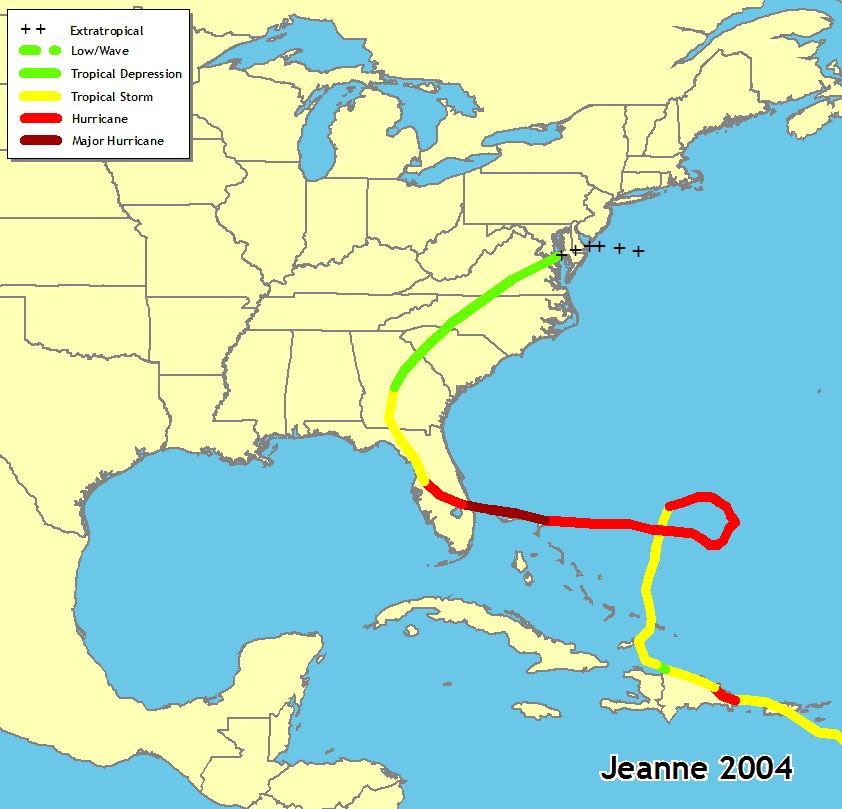 As you see, 2004 was a year of seemingly never-ending strong hurricanes in Florida. Jeanne hit Puerto Rico on Sept. 15, 2004 and took an indirect path toward Florida. She was at her strongest when she hit the state on Sept. 25.

"Jeanne weakened as it moved across central Florida, becoming a tropical storm during the afternoon of the 26th near Tampa, and then weakening to a depression a day later over central Georgia. The depression was still accompanied by heavy rain when it moved over the Carolinas, Virginia, and the Delmarva Peninsula on the 28th and 29th before becoming extratropical.

Jeanne produced extreme rain accumulations in Puerto Rico and Hispaniola, with nearly 24 inches reported in Vieques. Rains from the cyclone resulted in historic floods in Puerto Rico, and deadly flash-floods and mudslides in Haiti, where over 3000 people lost their lives and roughly 200,000 were left homeless. Three deaths occurred in Florida, and one each in Puerto Rico, South Carolina, and Virginia. In the United States, damage is estimated to be near $6.9 billion." 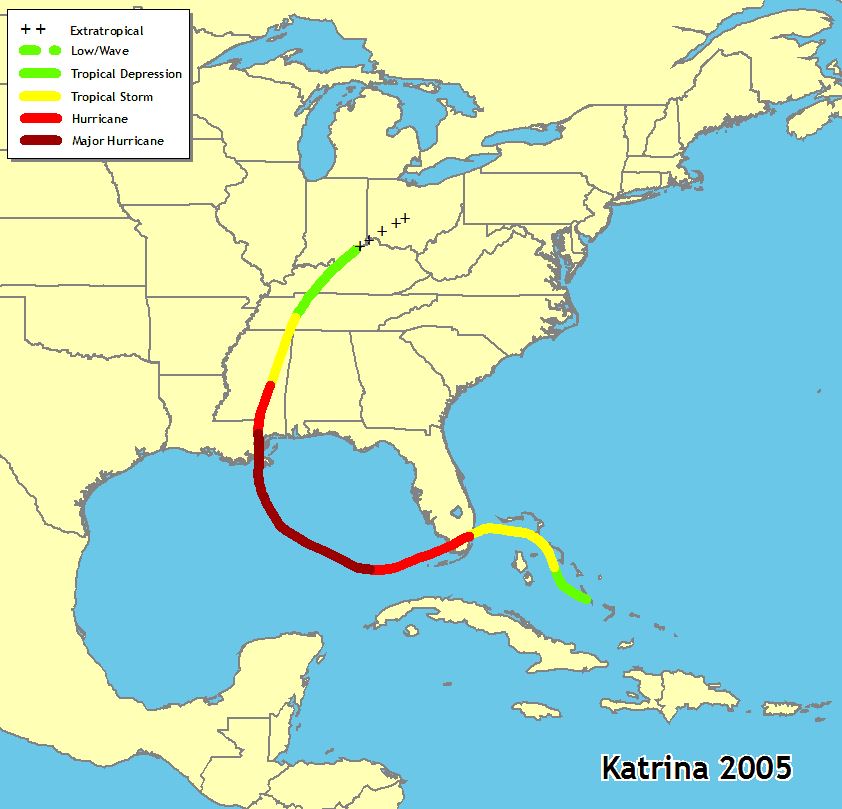 Katrina is not known for hitting Florida, obviously, as she is remembered for the devastation she caused in New Orleans. But, she still was a strong hurricane for Floridians.

"Katrina became a hurricane just before making landfall near the Miami-Dade/Broward county line during the evening of August 25. The hurricane moved southwestward across southern Florida into the eastern Gulf of Mexico on August 26. Katrina then strengthened significantly, reaching Category 5 intensity on August 28. Later that day, maximum sustained winds reached 175 mph with an aircraft-measured central pressure of 902 mb while centered about 195 miles southeast of the mouth of the Mississippi River. Katrina turned to the northwest and then north, with the center making landfall near Buras, Louisiana at 1110 UTC August 29 with maximum winds estimated at 125 mph (Category 3)." 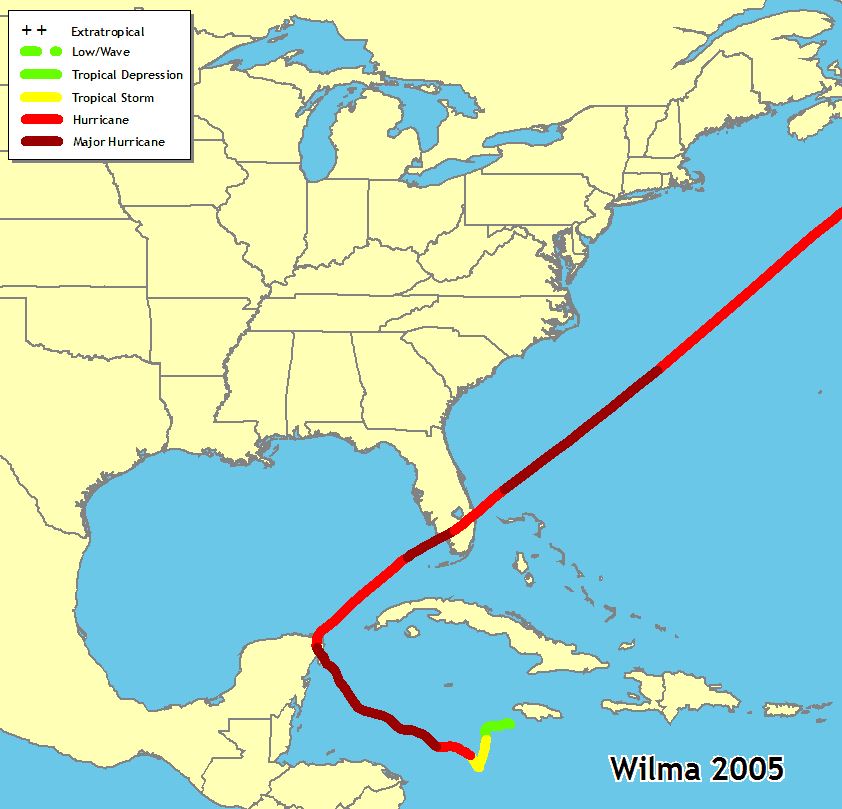 Wilma had one of the strangest paths to Florida. She hit the tip of the Yucatan peninsula and went into the Gulf of Mexico where she strengthened to a Category 2 hurricane on Oct. 23, 2005. She suddenly took a direct path toward southern Florida, gaining strength along the way.

"In Florida, a South Florida Water Management District (SFWMD) station in Lake Okeechobee reported 15-minute average winds of 92 mph with a gust to 112 mph at 1500 UTC October 24, while a nearby SFWMD station in Belle Glade reported a gust to 117 mph. Ten tornadoes occurred in Florida due to Wilma.

Twenty-two deaths have been directly attributed to Wilma: 12 in Haiti, 1 in Jamaica, 4 in Mexico, and 5 in Florida. The hurricane caused severe damage in northeastern Yucatan, including Cancun and Cozumel, and widespread damage estimated at $16.8 billion in southern Florida. Wilma also produced major floods in western Cuba."

All images are courtesy www.nhc.noaa.gov.

On Sept. 8, 2017 Hurricane Irma was nearing Tampa in an area south of Lakeland -- a community inland and to the east of the heavily populated Tampa Bay region. A hurricane center update at midnight that day said Irma remained a Category 2 hurricane with top sustained winds of 100 mph (155 kph) and was located about 25 miles (35 kilometers) south of Lakeland. Irma became a Category 4 storm and ended up passing through the Florida Keys with ferocious wind and storm surge. 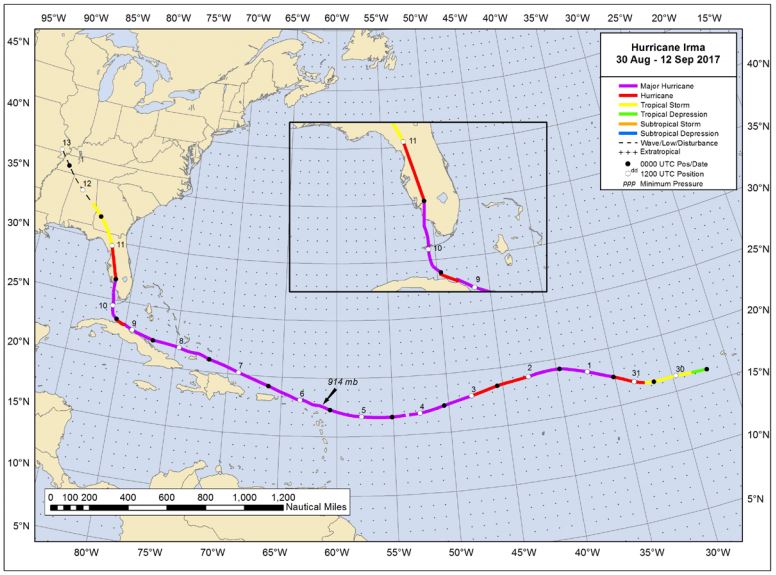