New coronavirus cases surge across the country including in Michigan

Metro Airport briefly touched -4 degrees this morning, which tied the record low for this date, set way back in 1925.  Temperatures at the midday hour are struggling upward through the single numbers above zero, with some locations finally at least making it to double digits.

Today’s sunrise was at 8:01 a.m., and today’s sunset is at 5:08 p.m.  You probably won’t notice it, but we have one more minute of daylight today than yesterday!  I call that progress.

Mostly clear and bitterly cold tonight.  Actual lows once again near and below zero (-18 degrees Celsius).  Thursday’s record low is -4 degrees, set in 1924.

Early sunshine on Thursday will be replaced by clouds, but the daylight hours will remain dry. Highs in the mid teens (-9 degrees Celsius).

Periods of light snow are likely Thursday night -- this is the storm system approaching that I told you about yesterday. Right now, it appears to be a non-event for us, with an inch or less of accumulation.

Mostly cloudy and breezy on Saturday with a light snow shower possible.  Highs in the mid teens (-9 degrees Celsius), with very cold wind chills coming back into play, and sticking around for a few days.

Partly cloudy on Sunday, with highs in the low teens (-11 degrees Celsius).

New Year’s Eve looks dry -- that’s the good news. The bad news is that it’ll be brutally cold.  Lows by Monday morning will be around -3 degrees (-19 degrees Celsius). 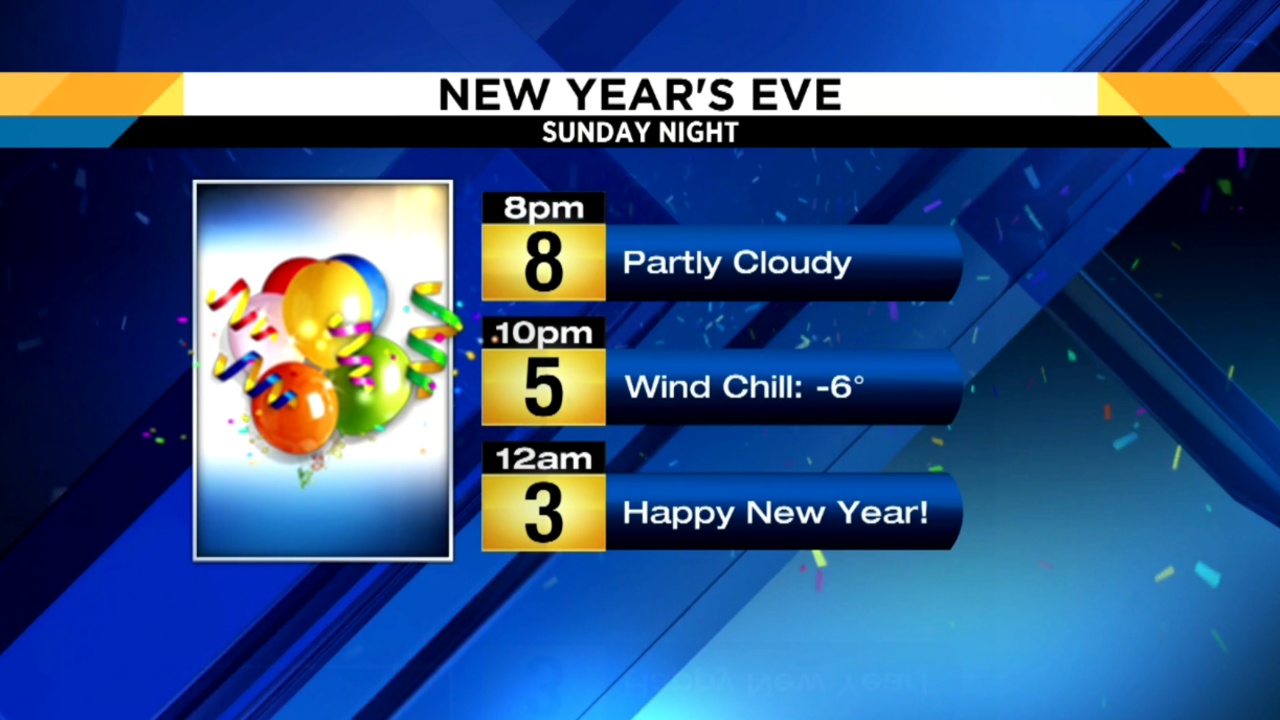 Tuesday through the end of the week will be partly cloudy on average, so the first week of the year will at least be quiet, weather-wise.  Temperatures will remain in the low teens (-11 degrees Celsius) through midweek, then rise all the way into the low 20s (-5 degrees Celsius) by Friday! Sounds like a good reason to throw a party. Boy am I pathetic getting excited about low 20s.

As you’ve just read, we have a bitter cold week ahead for the kids’ school vacation.  If it’s too cold for the kids to play outside, there are a LOT of things to do with them on their holiday break from school. If they’re into science, try the Michigan Science Center, the Cranbrook Institute of Science, or the Ann Arbor Hands On Museum -- all promise a great time. There’s the Detroit Historical Museum to give them a taste of Detroit history. There’s the Detroit Institute of Arts - so much to see and do there (and remember that it’s more than “just” paintings -- they have medieval suits of armor, ancient Egyptian artifacts, and all sorts of neat stuff that the kids will enjoy). If they’re into music, how about taking them to the Motown Museum for some Detroit music history? And check the Pistons and Red Wings schedules -- Little Caesars Arena is a great place to watch a game.  And while you’re downtown, take them on the new Q-Line!  Or, for a lot of fun on the cheap, take them bowling!