DETROIT – Damon Grimes died at a hospital Saturday after he crashed an ATV into a pickup truck at Rossini Drive and Gratiot Avenue in Detroit.

Michigan State Police said troopers had tried to stop Grimes, 15, for "reckless driving," but the teen fled on the ATV. Troopers pursued and one of them used a Taser on Grimes, striking him before the crash. That trooper has been suspended for violating police protocol.

Witnesses said the trooper pulled close to the ATV and fired his Taser during the chase, and they believe it might have caused Grimes to crash. Witnesses said the teen was trying to get onto the sidewalk when he hit the pickup truck.

"He was riding, and he went tense, like this," a witness told Local 4. "That was it. As soon as he did that, he lost control and flipped over."

State police released this statement on the chase:

"The troopers activated their emergency lights and siren, but the ATV driver refused to stop. The troopers pursued the ATV east on Rossini, and as the ATV approached Gratiot Avenue, the driver attempted to drive off the roadway onto the sidewalk, but crashed into the rear of a pickup truck."

State police also said the department is conducting its own investigation into the crash. 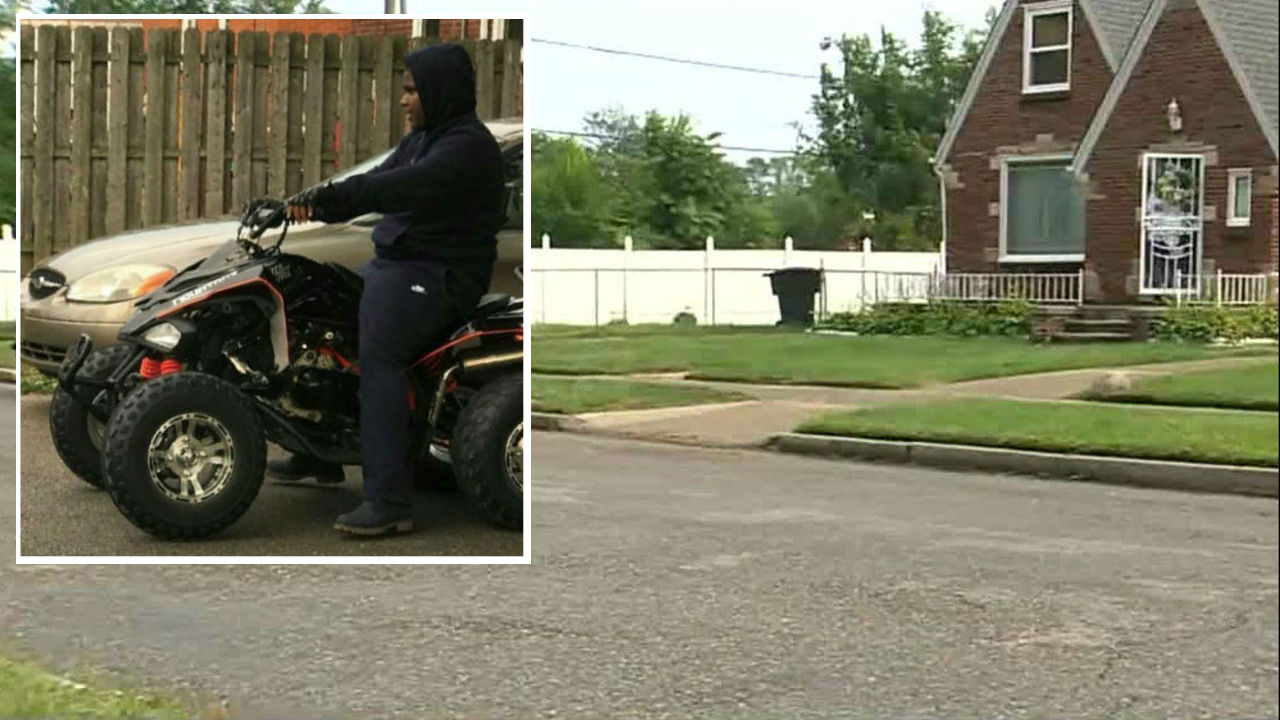 "It shouldn't have to be like this," said Monique Grimes, Damon's mother. "He was only 15. He enjoyed riding his bike. It wasn't like he committed any crimes. I just want justice for Dae Dae."

Hundreds of people showed up to a vigil Wednesday night, furious over the 15-year-old's death. Friends and family members were among those who gathered for the vigil, some of them around Damon's age.

The family wanted a remembrance of Damon, but it quickly got out of hand, as a small group of young men were trying to incite a problem, Local 4's Mara MacDonald reported. They began chanting, "F--- the police" as stoic officers tried to diffuse the situation.

Damon's family members told them to stop, but it was a tense half hour until the crowd finally moved on. Police at one point had to close down Gratiot Avenue.

"I am not a proponent of high-speed chases involving traffic infractions, or those involving misdemeanors," Craig said.

Craig said the investigation in no way negatively reflects on MSP, but that a situation such as this warrants an independent investigation.

Southfield-based attorney Geoffrey Fieger filed a $50 million lawsuit on behalf of Damon Grimes' family. Fieger, who spoke during a news conference Wednesday afternoon, compared the trooper to a cowboy.

"I cannot conceive, under any set of circumstances, a justification for a police officer doing a drive-by shooting of a child on an ATV," Fieger said.

Fieger said the trooper has a history of using excessive force.

"This situation is not an isolated incident," Fieger said.

The lawsuit claims the trooper did not stop his patrol vehicle after Grimes crashed and instead drove away.

A news conference organized by concerned clergy and citizenswas held Thursday afternoon in front of the Detroit police 9th Precinct on Gratiot Avenue.

"It seems like law enforcement treats Detroit like a hunting ground and black citizens are the prey -- this will not be tolerated," said David Alexander Bullock, of Greater St. Matthew Baptist Church.

Bullock was joined by Terri Jeffrey, of the Change Agent Consortium, and Rev. W.J. Rideout III, of All God's People Church.

"We must demonstrate in order to show law enforcement and our community that we will not let this incident get swept under the rug. We demand justice," said Rideout.

A demonstration is planned for Friday outside the Detroit Police Department headquarters on 3rd Street.

Our hearts go out to the family and friends of Damon Grimes. I fully support Chief Craig’s decision to have the Detroit Police Department conduct an independent investigation into the events leading up to his death. DPD will be presenting its findings to Wayne County Prosecutor Kym Worthy.

Police chases often have the potential for tragedy and the difference in the policies of the Detroit Police Department and the Michigan State Police highlight that concern.  The Detroit Police Department policy is not to engage in high speed chases for traffic offenses or misdemeanors. In the case of felonies, the decision to continue a high speed chase is made by a supervisor.

I met with Governor Snyder and urged the State Police to adopt the City of Detroit’s policy when patrolling in our city. I also spoke with State Representative Sheldon Neely (D) of Flint and expressed my full support for his proposed legislation to require Michigan State Police abide by local pursuit policies when patrolling within the boundaries of a city.

I am encouraged that MSP leadership is taking steps towards changing its policy. Chief Craig and the Detroit Police Department will continue to work with them to ensure that safe policing procedures are followed in the city of Detroit.

Detroit City Councilman Scott Benson released a statement Thursday that noted there has been work to create a park geared toward off-road vehicles:

The death of Damon Grimes is a horrific tragedy that has hit our community hard. At this time, as tensions and emotions are running high, we ask the community for calm and to respect the life and legacy of Damon with peaceful protests. We are working closely with the Grimes Family, Mayor’s office, Detroit Police Department and Michigan State Police to monitor the situation and to make sure that community voices are heard throughout this process.

Additionally, while we acknowledge that ATVs are illegal for street use, we recognize their popularity for recreational purposes within the City of Detroit. That is why we have been working to support the ATV community with a new motor sports park geared toward off-road vehicles. More importantly, we want to ensure policies are in place to prevent this type of tragedy from ever happening again.