Report: Michigan has one of the largest populations of homeless students in US

Michigan ranked 6th among states for the most homeless students

The University of Michigan released a study this week showing more than 36,000 children in Michigan public schools are facing homelessness and/or housing insecurity.

According to a University of Michigan analysis, new data released by Michigan’s Department of Education shows dramatic disparities in educational outcomes for students experiencing homelessness. Under federal education law, all children who “lack a fixed, regular, and adequate nighttime residence” are homeless.

“These numbers tell us that students experiencing homelessness in Michigan are at a much greater risk for not finishing high school than their peers,” said Jennifer Erb-Downward, senior research associate with U-M’s Poverty Solutions initiative.

Some of her key findings include:

The issue is not just a Metro Detroit issue - it's a state issue. Over 70 percent of homeless students were enrolled in schools located outside of Southeast Michigan – the state’s most populous region.

Here are the districts reporting the most homeless students:

Here are the districts with the highest rate of student homelessness:

The report not only details student homelessness, but also student poverty and low-income students.

Over 490,000 public school children (37 percent) were identified as low-income, and therefore eligible for free lunch. On average, 7 percent of all low-income school age children also struggled with homelessness.

Overall, in 40 percent of Michigan’s Local Education Agencies at least 1 out of every 10 low-income students was simultaneously struggling with housing instability and homelessness.

Here are the districts with the highest rate of low-income student homelessness:

What are the student homeless rates in Metro Detroit?

Although schools in Metro Detroit didn't rank in the highest in the state, they are still dealing with the troubling trend.

Here are some numbers from Metro Detroit districts:

You can find your district using this interactive map provided by the University of Michigan:

According to the report, more than 3,500 high school students in the class of 2017 were homeless in Michigan. While representing a small proportion of the entire student body (3 percent ), these students were disproportionately likely to face negative educational outcomes and accounted for almost 7 percent of all students who dropped out of high school.

Here are some key findings on graduation rates and homeless Michigan high schoolers: 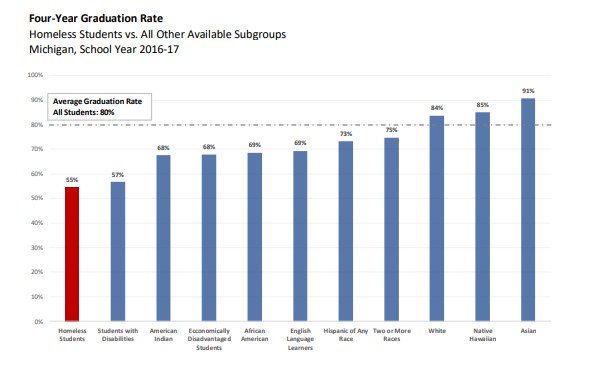 So, what's the solution?

The University of Michigan report makes four recommendations to help curb this troubling trend. Here they are:

You can read the full report on student homelessness in Michigan below: