Brilliant Detroit: A home for children, families in need

Is it time to take the fight out of hockey?

Let's Get Ready to Rumble!

You can hear the roars inside Joe Louis Arena when the Red Wings "light the lamp." Deafening screams fill the building after a big win.  But in between the goals and horn signifying the end of the game, you might catch another adrenaline-pumping event, a fight. Now, if you're a Red Wings fan you know that those instances are few and far between, but when they do happen fans jump to their feet and pound the glass.  It creates a visceral, roman coliseum vibe - fans watching gladiators spar in the middle of the crowd. By most accounts, it's an exciting spectacle to watch.

Fighting used to be a pleasure for hockey fans, not a guilty pleasure.  Now people are much more aware of head injuries/concussions, long-term effects and overall dangers involved with brain and head safety.  The truth is, at least in this instance, ignorance was bliss. At least from the fans' perspective.  But when you finally know something, you know it.  You can't unknow it.

Nearly 3,000 San Antonio Rampage fans watched their team lose a close game to the San Diego Gulls Tuesday night in the Alamo City.  It was a relatively normal game, with one ugly exception. In the second period of the game San Diego Gulls Right Winger, Brian McGrattan and Rampage Winger, Daniel Maggio dropped the gloves and started throwing haymakers.  Fists bouncing off shoulder pads, cheeks, temples, orbital bones and then it happens. Maggio's right hand swings around and catches McGrattan just right, and down goes McGrattan. He is knocked unconscious and falls face-first to the ice.  He is motionless for several moments and is eventually carried off on a stretcher and taken to the hospital.

The initial scare was felt through hockey:

On that last RT, which is tough to watch, thoughts are with @bigern10 and hoping he's OK.

The good news, McGrattan is fine.  The 34-year-old veteran had full movement and was conscious at the hospital later that night. He told TSN, "(he) won't change a thing." McGrattan acknowledges that the risks are there and always will be when you choose to be a hockey enforcer.

This incident sparked up conversation in offices, on TV, and in locker rooms across the country.  People and players wondering if fighting was really worth it.

When NHL Commissioner Gary Bettman is not getting booed, he's often times growing the sport of hockey.  Over the last two decades the NHL's annual revenue has grown nearly 900%.  Many think the promotion of the sports physical nature has helped that number increase, but not Bettman.  Here's what he told 'The Wall Street Journal' last January, “Fighting is one of those things that gets tons of attention, far more than it deserves,” he says. “The amount of fighting involved in the course of the game…may be at a record low now, and it’s down over 20% from last year and probably 30% or more from the year before.”  His belief is that there's not much fight left in the fight for fighting. 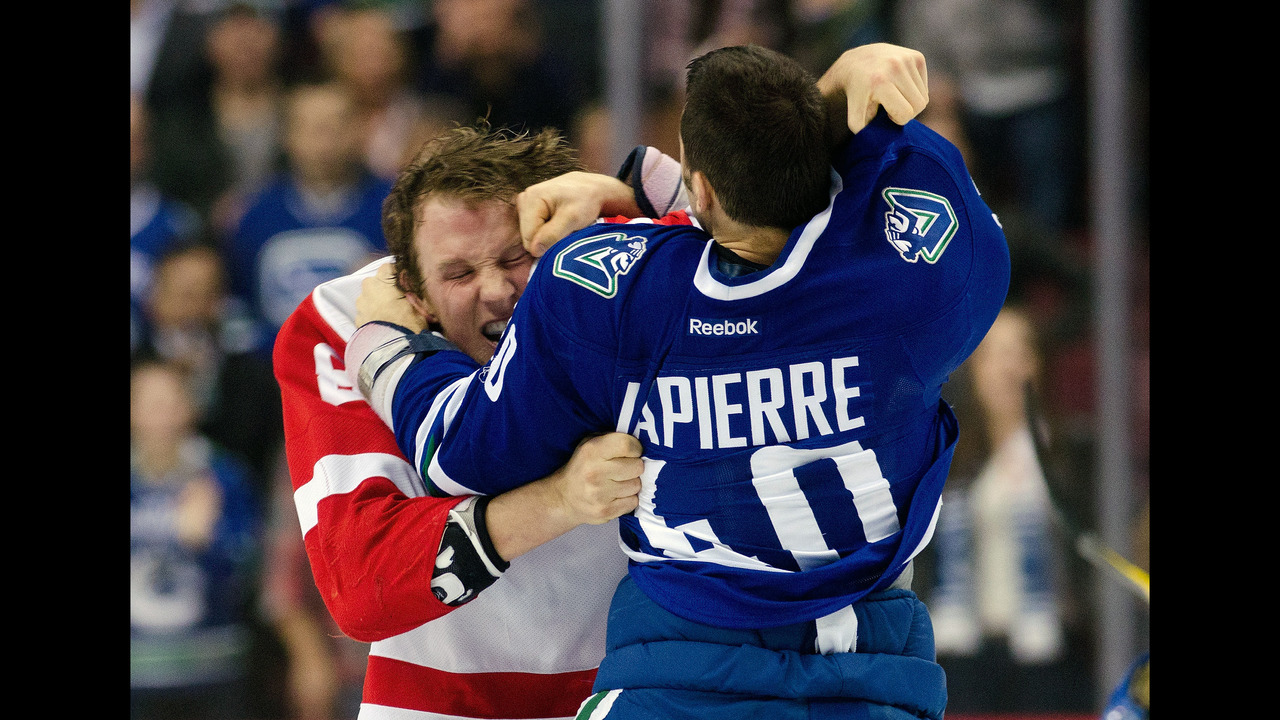 Justin Abdelkader -- the big, strong forward for the Detroit Red Wings -- has been known to get into a tussle or two.  He's one of the few players the Wings have had in recent years willing to drop the gloves.  His take on the matter was somewhat surprising (watch the video to the left):

The NHL should just ban fighting, right? You can see both sides to any argument, and this one is no different.  For hockey purists, fighting is part of the game.  Engrained in the DNA.  It's the way players can keep each other honest. But on the other side of the fence you'll hear; fighting is unnecessary; it's too dangerous; head injuries are a long-term problem; it sets a bad example.

The bottom line, fighting is fading away from a sport that has gotten sexier over the years. The game seems to move faster, with more agility and finesse.  Players are developing those types of skills.  They aren't worried about being the toughest guy on the ice anymore.  While it may never be written in any rule book, fighting will likely be excluded by players wishing to be more than bullies.