Study: Women in Michigan are paid 22% less than men

Check the facts: Resource guide for immigration, deportations in America

Separating fact from fiction can be difficult. Just because something is online, doesn’t make it true. That’s the most important rule in fact-finding and fact-checking.

We’ve put together a resource guide that navigates you through our research as a starting point for you to do your own fact checking. Finding hard numbers on illegal immigrants is difficult because this is a population that is often afraid to be counted.

Our primary sources of information are always government entities that are tasked with counting.  These agencies don’t count every year and so finding empirical and comparative data can be difficult.  But government agencies are the best places to start.

Secondary sources are organizations that hold contracts with the U.S. Government to help it count. Often the government will commission a study or look for answers from these non-profit, non-partisan organizations.

We never use partisan organizations as sources.  It’s not uncommon for a non-profit to cloak itself as a non-partisan organization and so you must be careful of ‘spin’.  One way to check is to find out who the board members are, check funding sources and carefully investigate the writings and documents of the organization.  Other media sources are also NOT sources of information, though we have included links to articles and coverage of immigration issues so that our viewers can see how primary data is interpreted in many ways.

We hope this guide is a roadmap for you to check our facts for yourself to gain a better understanding of this most difficult to understand topic. 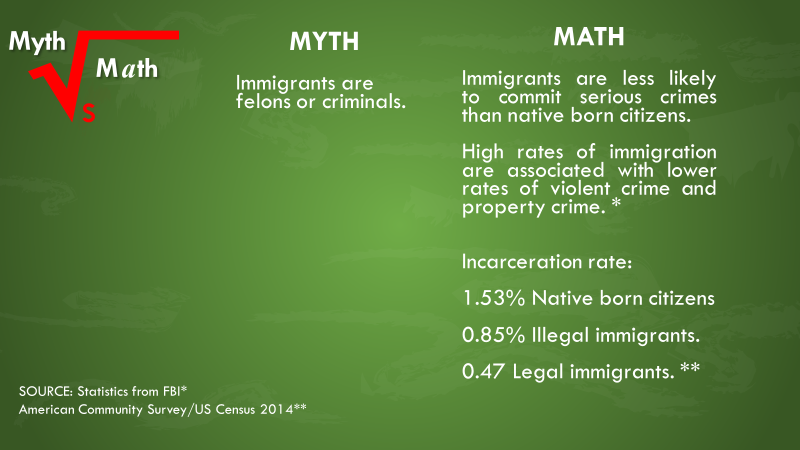 b.    The majority of inmates in the public-use microdata version of the ACS are in correctional facilities, but the data also include those in mental health, handicapped, and elderly care institutions. This adds ambiguity to the findings about the illegal immigrant population but not about the immigrant population as a whole, because the ACS releases macro-demographic snapshots of inmates in correctional facilities, which allows us to check our work. This ambiguity in illegal immigrant incarceration rates is why they narrowed the age range to 18-54 so as to exclude inmates in mental health and retirement facilities.

As of 2014, there are no major U.S. industries in which immigrants outnumber the U.S. born, according to a Pew Research Center analysis of government data.

In all industries and occupations, though, they are outnumbered by U.S.-born workers.

According to SSA report in 2010, while unauthorized immigrants worked and contributed as much as $13 billion in payroll taxes to the OASDI program, only about $1 billion in benefit payments during 2010 are attributable to unauthorized work.

Bill Clinton signed The Illegal Immigration Reform and Immigrant Responsibility Act of 1996, or “IIRIRA.” Congress legislated that not only would undocumented immigrants not receive welfare, but legal immigrants wouldn’t get benefits such as food stamps, Medicaid or money for child assistance until they’ve lived here at least five years and even seven years after their arrival.

Only the 'bad hombres' are being deported, right?

Estimates of the total deportable  criminal noncitizen population vary widely, from about 820,000 according to the Migration Policy Institute to 1.9 million according to Immigration and Customs Enforcement (ICE), but rarely is the number of those incarcerated estimated.

According to new numbers for the 2018 fiscal year, between October 2017 and March 2018, Immigration and Customs Enforcement (ICE) officers arrested 21 percent more immigrants with no criminal convictions to their name, compared to the same period of time the year prior.

The Washington Post reported that Immigration and Customs Enforcement (ICE) arrested 37,734 undocumented “noncriminal” immigrants in the 2017 fiscal year, more than double the amount in 2016. This category of people includes those facing charges and those with no criminal records at all.

While more conviction-less immigrants are being detained, the number actually being deported remains about the same. Overall, about 54 percent of deported immigrants without legal status in the first half of fiscal 2018 had criminal convictions.

Is the illegal immigrant population growing?