Watch Local 4 News at 10 p.m. streaming here on ClickOnDetroit or on the Local 4+ channel on Apple TV, Roku or other Smart TV device.

2 big names look to lead UAW out of corrupt, dark past in Metro Detroit

Here’s a great price on a standing desk convertor

FARMINGTON HILLS, Mich. – Livonia police have arrested a man who is also a person of interest in the investigation into Danielle Stislicki's disappearance.

Police said the man was arrested Tuesday in Oakland County in connection with the sexual assault of a jogger in Hines Park. A 28-year-old woman said she was attacked around 7:30 p.m. Sept. 4 while jogging on the bike path west of Levan Road.

The woman told officers that a man wrapped his arms around her neck and struck her on the side of her face. She struggled with the attacker as he attempted to drag her toward the Rouge River. Police said the man attempted to remove her clothing and told her that he wanted to have sex with her.

The victim was able to fight off the man and run away. She flagged down a motorist and used his phone to call police. Officers weren't able to find the attempted rapist, but the man in the sketch was taken into custody Tuesday.

Sources told Local 4 that the same man is a person of interest in Stislicki's disappearance.

The last time anyone saw or heard from Stislicki was Dec. 2, 2016 when she was leaving her job at MetLife in Southfield.

The 28-year-old woman's Jeep Renegade was found parked outside her apartment on Halsted Road near Grand River Avenue in Farmington Hills. Her purse was found in the vehicle. Police said investigators weren't sure if Stislicki or someone else parked the Jeep outside the apartment complex.

Stislicki's cellphone, a Samsung Galaxy Core Prime, also was missing. It had a rose-gold case. Moreover, her keychain with a charm is missing. Both are pictured here: 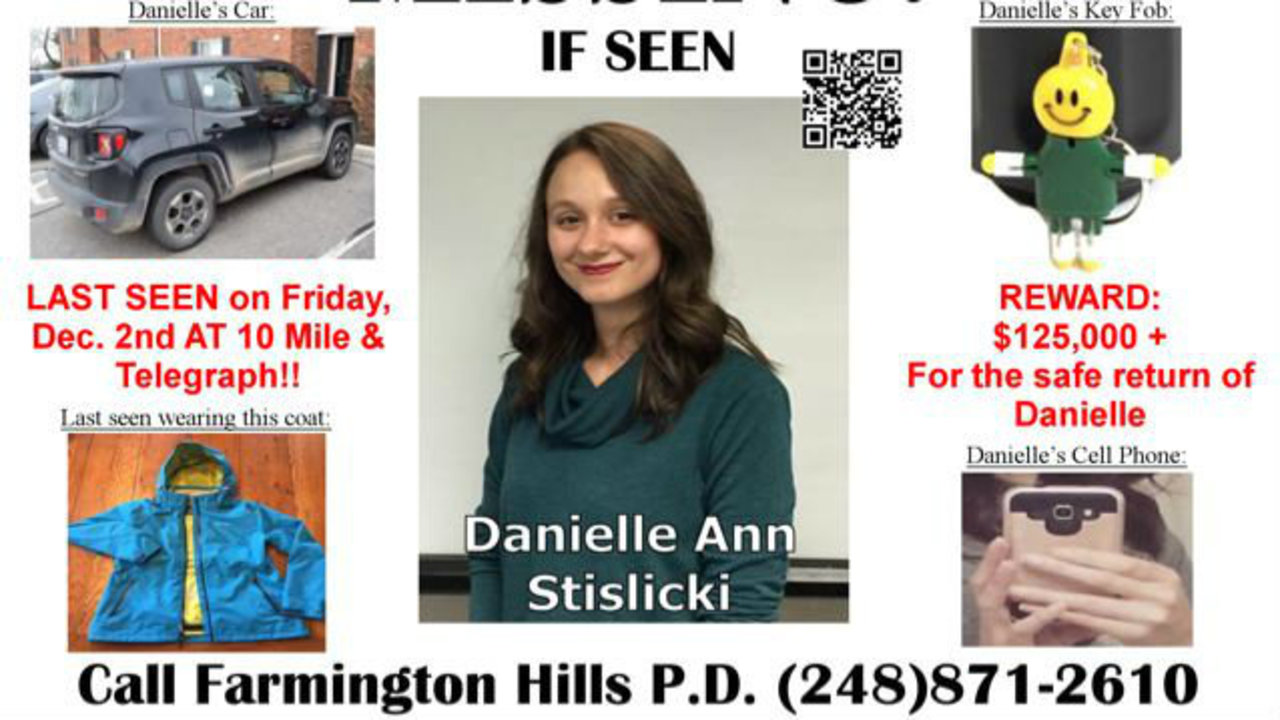 Here's a timeline of events since Stislicki left her job that day:

Stislicki was last seen leaving her job at MetLife in the 25000 block of Telegraph Road in Southfield. She was planning to meet a friend for dinner after work.

"That particular day she was scheduled to work longer. And because things were a little slow she asked, after getting a request from a friend, whether or not it would be OK if she left early," said Stislicki's father, Richard Stislicki.

Ann Stislicki, Danielle's mother, said she thinks the final text message she sent to the friend is that she was able to get off work early and that she was going to "swing home real quick, pack a bag" and meet the friend at dinner.

Stislicki left work about 5 p.m. that day. However, she never showed up to dinner and did not communicate to her friend.

Stislicki's friend was worried, so she went to the Independence Green apartment complex where Danielle lived the next day. Stislicki's Jeep Renegade was found parked just 8 feet from her apartment door. Her purse was left in the SUV.

More than $125,000 is being offered as a reward to anyone who could help bring Stislicki back to her parents safely. On Dec. 7, the Independence Green apartments chipped in a $50,000 reward.

Police announce they believe Stislicki is a victim of a crime.

After more than two weeks with no sign of Stislicki, law enforcement searched a home in the 2900 block of Oxford Road in Berkley. Sources told Local 4 a mattress and other items were taken out of the home.

A former security guard who was contracted to work at the MetLife office where Stislicki worked lives at the Berkley home. The guard was not working at the office at the time of Stislicki's disappearance.

"Farmington Hills detectives and members of the Oakland County Sheriff’s Office Crime Lab were at a home in Berkley last night investigating the disappearance of Danielle Stislicki. Farmington Hills detectives and investigators from several other agencies have been involved in searches and the collection of evidence at numerous locations over the past three weeks. Detectives, evidence technicians and crime lab personnel from several law enforcement agencies have been working tirelessly and remain committed to finding Danielle and solving this case. The investigation has been progressing since day one. I understand a caring public and media are anxious for information. However, no information will be released regarding the specifics of the case in order to maintain the integrity of the investigation."

Hundreds attended a vigil at the VFW in Redford Township. The Stislicki family moved out of Redford more than a decade ago, but the community remembers the family and poured out support for them. Danielle graduated from Redford Union High School.

Stislicki's parents spoke with Local 4 Defender Karen Drew about the case, their thoughts and the latest on the investigation.

"It's that lighthearted smile, the silliness," Ann Stislicki said. "We talk about her as if she's still living in the apartment. Having that hope is why you have the energy to work at the pace, to only get a couple hours of sleep because we want to make it happen as fast as we can. We want to be able to get Danielle back."

The Local 4 Defenders learned more details about the Dec. 22 search of a home in Berkley. Neighbors said the security guard hasn't been seen in Berkley since police searched the home.

Officers carried a mattress out of the home, and the Defenders learned that some floorboards were confiscated by authorities and sent off for testing. Sources told Local 4 that police also removed a car from the garage.

"It's like putting together the pieces of a puzzle, and every day it seems like there's another piece that goes into the puzzle," Chief Nebus said.

There have been no updates to Stislicki's case. Police said the case is centered in Oakland County, and 12-15 police agencies are working on it.

Anyone with information on the case is asked to call the Farmington Hills Police Department at 248-871-2610.

Nearly six months after their daughter's disappeared her parents talked about how they cope with the pain.

"You cannot just vanish off the face of the earth," Ann Stislicki, Danielle's mother, said.

Her parents are still waiting for answers as their hope fades. They opened up about their struggles as they search for justice.

"It's terrifying to think that I would even have to go another month waiting to find answers," Ann Stislicki said.