Are you the victim of a cramming scam?

Is it really Halloween if you don’t have this cute 4-inch inflatable witch pumpkin sitting on your porch?

Stay safe this Halloween with these festive kids face masks

Evans' office said the deal will provide the county with four state-of-the-art buildings as a solution to its long-stalled Gratiot jail project. As part of the deal, the county would invest $380 million with Rock covering the remaining costs and any overruns.

"We made the best of a tough situation and have a definitive path forward to address the failed jail project. It’s been an albatross for the county for far too long," Evans said in a news release. "At the end of the project we will have an entirely new criminal justice complex, and most importantly, the County’s construction costs are capped. We now know what we are going to pay and can budget accordingly. That better positions us to tackle other facilities and infrastructure challenges beyond our jails."

Here are more renderings of the new criminal justice center, which is expected to be completed by 2022:

According to Evans' office, as part of the deal the newly constructed criminal justice center will house the county’s 2,280-bed jail, sheriff and prosecutor staff and administrative offices, criminal courthouse and juvenile detention facility. The center will be completed on property bounded by the I-75 Service Drive and East Warren Avenue, which is being acquired from the city of Detroit.

The site is on about 13 acres of land bounded by the I-75 Service Drive, East Warren Avenue, East Ferry, Russell and Frederick, mapped here: 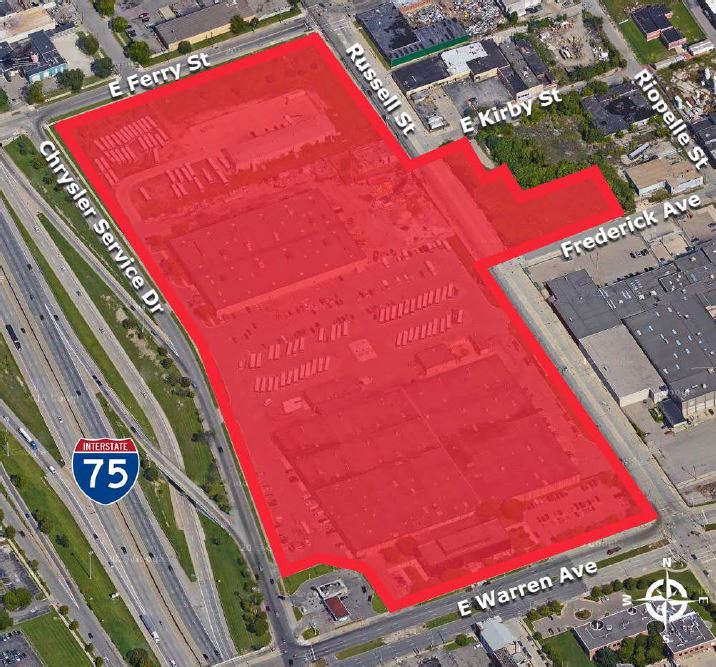 Key components of the deal, which Evans' office said will now head to the County Commission and Building Authority for approval, include:

"Today the County Executive announced a huge step toward replacing outdated jails and courthouse facilities in what could be the best solution for both Wayne County taxpayers and the continued revitalization of downtown. The Wayne County Commission is prepared to carefully examine all aspects of this proposal and decide whether it is in the best interests of the people we represent. I am encouraged that an agreement finally has been reached between Rock Ventures and the county administration, and I appreciate the intense and detailed work it took to get us to this point."

As part of this deal, the county will transfer to Rock, the existing Division I and II jails, juvenile detention facility and Frank Murphy Hall of Justice. Upon approval and execution of the deal, these parcels will be leased back to the county for $1.00 per year until the criminal justice center is complete and the county has transitioned to the use of the new facilities. Rock will also, in a separate transaction, purchase, the property where the unfinished Gratiot jail is located.

Gilbert has expressed interest in building a mixed-use development on the Gratiot site, which at one point included a professional soccer stadium.

Rock Ventures released a statement Wednesday explaining it is beginning the "design and planning phase for a major, mixed-use, job-creating, $1 billion-plus new Downtown urban development on the land once planned for the new county jail."

"This agreement is an outstanding example of Detroit 2.0, where the public and private sectors partner together in a smart, cooperative and optimistic manner to find and implement the best outcome possible,” reads a statement from Gilbert. "The solution here not only fixes significant mistakes of the past, but at the same time delivers to the county a completely new, ground-up criminal justice center, in addition to resulting in a large, mixed-use development on the former proposed jail site."

Here's a map plotting the Gratiot Avenue site as it is now: 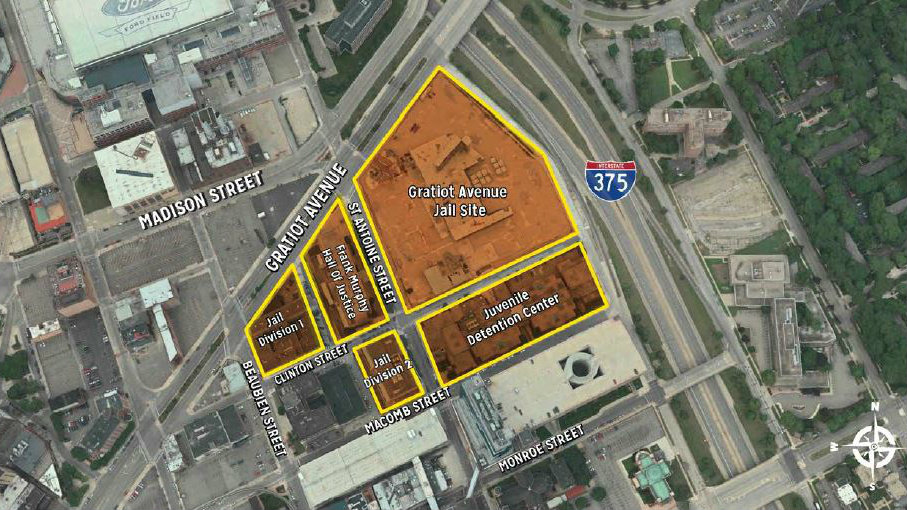 The county will pay its portion of the construction costs with remaining bond proceeds from the Gratiot failed jail project, new bonds specific to the current project and some general fund revenue. Based upon discussions with the Internal Revenue Service, Wayne County’s bond counsel has advised the administration that the transactions, as structured, will satisfy applicable federal tax requirements.

"This has been an extraordinarily complex process involving over half a billion dollar development deal with land acquisition from a third party. I couldn't be prouder of my team, for all the work it took in reaching the best possible solution," Evans said. "I’m also pleased that building the new jail will allow us to close the County’s three existing jails, leading to improved efficiency, cost-savings and addressing the long-standing poor conditions."

Under terms of the deal with Rock, Barton Malow will serve as the general contractor while Hellmuth, Obata and Kassabaum, Inc. will serve as the architect. The county retains the authority to approve the designs as it moves from schematics to development and finally construction. The criminal justice center must be designed and constructed in accordance with "Outline Specifications" as approved by the county.

The final purchase agreement on the land swap deal with the city of Detroit still requires approval of the Wayne County Commission and the Wayne County Land Bank, which owns the AMC property.

"The announcement that Wayne County Executive Warren Evans has reached an agreement with developer Dan Gilbert’s Rock Ventures on a potential new site for the proposed Wayne County Jail is important news for all Wayne County residents, especially for those in my district – where the new jail would be located.

“I want to remind everyone that the final decision rests with the Wayne County Commission. I also want to assure everyone that I will be doing my due diligence with regard to this agreement and make the best decision I can for the residents who would be most affected."