DETROIT – Damon J. Keith was the grandson of slaves.

He grew up poor in Detroit. His father worked at Ford Motor Company during its $5-a-day era.

Keith said he didn't want to disappoint his father and worked long and hard to become a lawyer at a time when it was beyond difficult.

Under the boot of racially divided America, he learned to deal with the word "no" at almost every turn. He persevered, attended West Virginia State College, served in a segregated U.S. Army in Europe World War II, then attended Howard University Law School, learning under the late Supreme Court Justice Thurgood Marshall.

When he started practicing law in Detroit:

"There were no black judges over at recorders court or in Wayne County Circuit court and they used to treat black lawyers like dogs," he said.

Keith's desire to combat that racism and deliver truly equal justice codified in the Constitution fueled his tenure that began in 1967, when President Lyndon Johnson appointed him federal judge. Quickly, he started seeing important civil rights cases. He put his and his family's safety in jeopardy by ordering bussing for racially segregated Pontiac.

Then he ruled against President Richard Nixon in a wiretapping case against Ann Arbor political radicals, ruling even the President needed a judge's prior approval. It became known as the Keith Case.

"It went to the court of appeals, it was affirmed there and then the Supreme Court unanimously affirmed, and as a result of that case President Nixon had to turn over the Watergate tapes," Keith said.

In 1977, President Jimmy Carter appointed Keith to the 6th Circuit Court of Appeals. In 2002, Keith once again reminded a president about due process. It was just after 9/11 when he decided President George W. Bush's administration needed to have open immigration hearings.

Judge Keith had many famous friends. He oversaw the memorials for Rosa Parks when she passed. His Downtown Detroit office became the place where you could find the who's who passing through. But the judge himself always wanted to be known as a humble, fair judge who remained dedicated to equal justice under the law and lived his Christian faith.

"Every morning before I start work in this office, I close that door and I have the Bible there. I read from it. I read from Proverbs and the daily word. I try to give thanks to God for all of his blessings," he said.

Keith was 96 when he died Sunday.

“Judge Damon Keith was a civil rights icon. In his decades of public service, he stood up for what was right, even if it meant facing attacks and threats from others. Because of his strength, his determination, and his commitment to ending racism in our country, Michigan is grateful and better for it. We should honor Judge Keith’s legacy by working together to build a Michigan where everybody, no matter who they are or where they come from, can get ahead.” -- Michigan Governor Gretchen Whitmer. 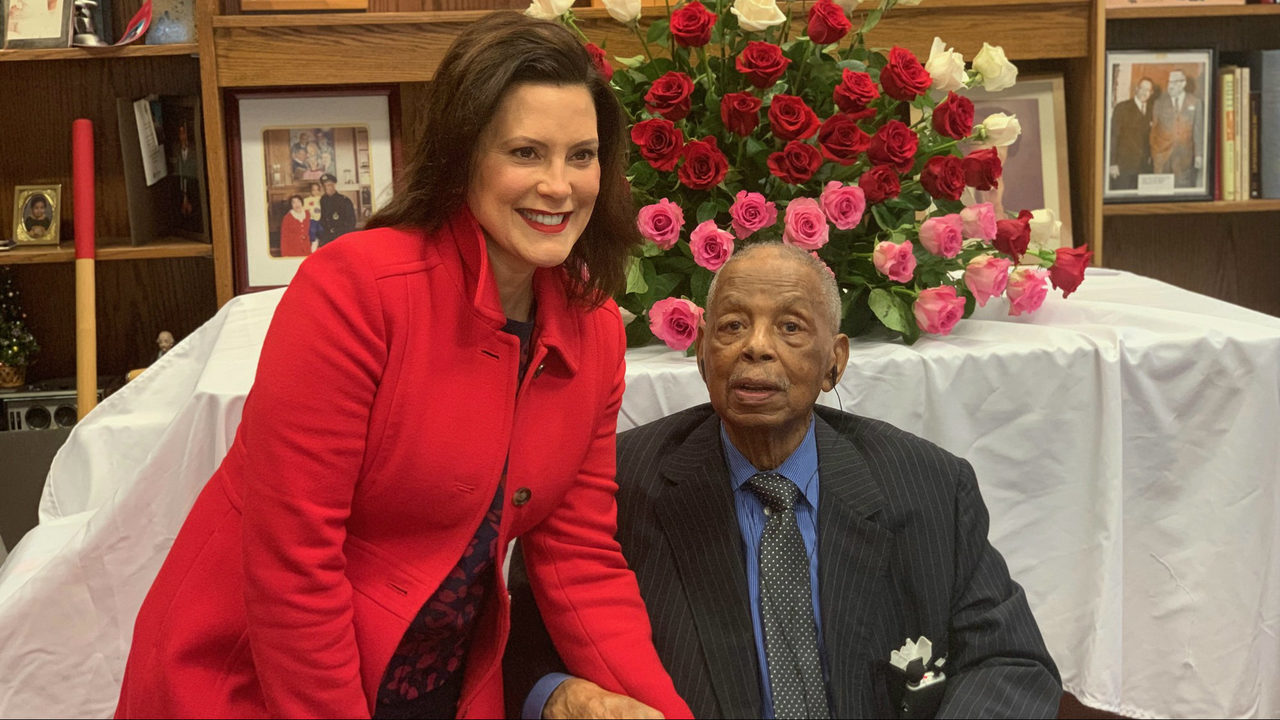 "Our country has lost a legal titan who spent more than half a century as a crusader for civil rights. His decisions from the bench prevented the federal government from infringing on individual liberties and helped to battle systemic racism in corporations, municipalities and schools. I first came to Michigan to clerk for Judge Keith, who became my mentor. I was proud to serve as dean at the law school that houses the Damon J. Keith Center for Civil Rights." - Michigan Secretary of State Jocelyn Benson. 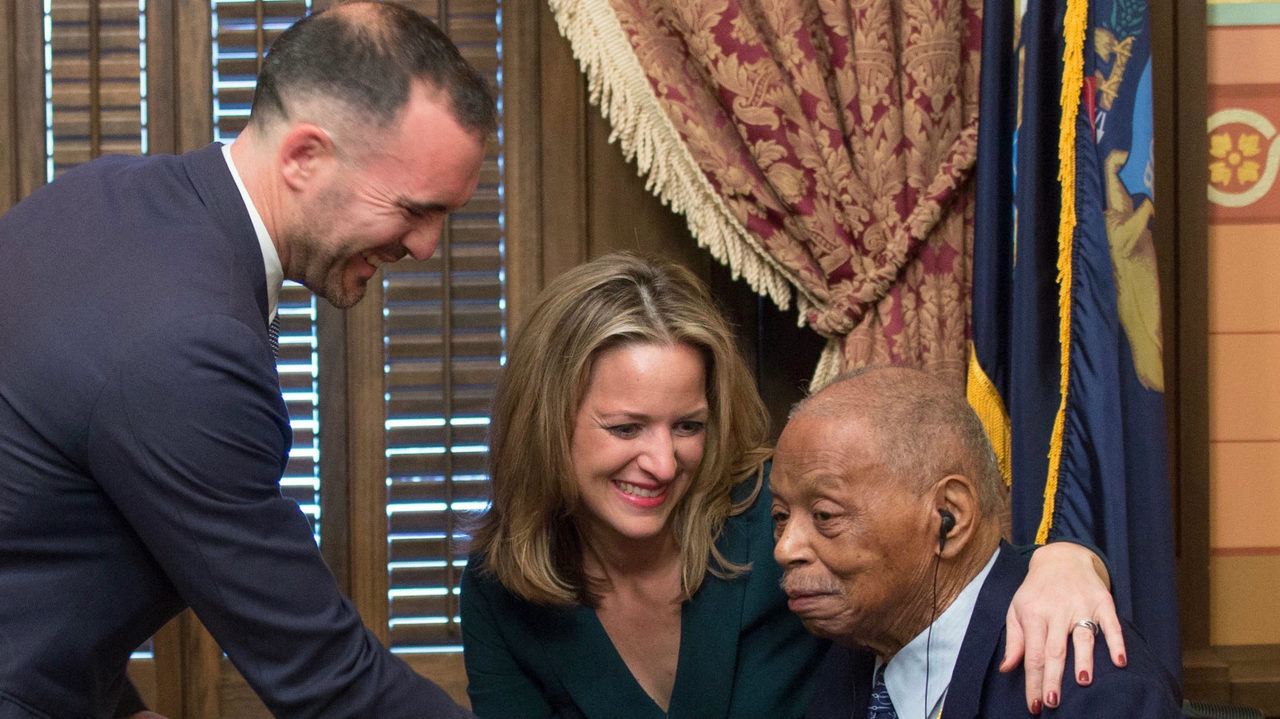 "Detroit lost a dear friend this morning with the passing of Judge Damon Keith, and America lost a national treasure.

Judge Keith left as indelible a mark on this nation and our city as any jurist in history. During his more than 50 years on the federal bench, he handed down rulings that have safeguarded some of our most important and cherished civil liberties, stopping illegal government wiretaps and secret deportation hearings, as well as ending the racial segregation of Pontiac schools.

Here in Detroit, he opened the doors for countless young law clerks, many of who have gone on to become judges themselves.

I have so many fond memories of Judge Keith. I was humbled and honored the two times he administered the oath of office when I was sworn in as Mayor. I will always treasure the Thanksgiving Day I spent with him in 2016, driving him in the parade as he served as Grand Marshal.
America is a better place because it had Judge Keith to help safeguard our civil liberties. Our city is a better place because he spent every day of his life as a committed and involved Detroiter. We will miss him dearly." - Detroit Mayor Mike Duggan.

“The passing of Judge Damon Keith marks the end of an incredible life’s journey - not just for one man but for a nation that craved his leadership. For more than half a century Judge Keith ruled from the bench with compassion, integrity and justice - an example for all of us. He was an inspiration by word and by deed to me and to every lawyer and political leader I know.  He once wrote ‘Democracies die behind closed doors.... When government begins closing doors, it selectively controls information rightfully belonging to the people. Selective information is misinformation.’ We should honor his memory and his legacy by living those words.” - Michigan Attorney General Dana Nessel.

"Democracy stands on the shoulders of leaders like Judge Damon Keith. Few have played such an important role in protecting civil liberties and forcing our country to live up to its foundational ideals of equality and justice for all. As we mourn, we also celebrate the life of an icon who left this world far better than he found it. He did so much for so many, it’s hard to adequately put into words.

On a personal level, Judge Damon Keith was more than a mentor, he was a motivator who challenged us to be the best version of ourselves. He was always there when called upon to help prepare the next generation of civil rights leaders and public servants. We looked to him for guidance and wisdom and always walked away inspired to reach higher. When I was first elected to public office, Judge Keith swore me in, which I consider the honor of a lifetime. Our thoughts and prayers go out to the Keith family as they mourn and celebrate a life well lived." - Wayne County Executive Warren Evans.

“This morning at approximately 6:40 a.m., Senior United States Court of Appeals Judge Damon J. Keith, one of America’s most towering legal figures, passed away at home in Detroit, surrounded by his family. He was 96 years old. Judge Keith was one of the most influential Federal jurists of the 20th and 21st centuries. The grandson of slaves, his rulings in over 52 years on the bench had a profound impact on American life. His decisions ranged from prohibiting the Nixon Administration from warrantless wiretapping in national security cases, to the integration of the Detroit Police Department and the Pontiac Public Schools. President Lyndon Johnson appointed him to the US District Court in 1967, where he later served as the Court’s first African American Chief Judge. In 1977 he was elevated to the US Court of Appeals for the Sixth Circuit, the nation’s second-highest Court, by President Jimmy Carter. He was a family man possessed of uncommon humility, a leading patron of the arts, a mentor who opened doors to scores of aspiring lawyers and judges, and a proud Son of Detroit. Arrangements will be announced shortly.” - Eric L. Clay Judge, US Court of Appeals For the Sixth Circuit.

“It is a great loss to our nation and the Constitution to lose a legal giant like Judge Keith. He dedicated his legal life to protecting the rights guaranteed under our Constitution and decided some of the pressing issues of our time.

He was a dedicated husband to his late wife and a loving father and grandfather. During an outstanding and demanding legal career, he found time to mentor law clerks and judges. Those of us who knew him appreciate the time he gave us.” - Chief U.S. District Judge Denise Page Hood

"The civil rights community has lost a giant among those who have consistently fought to hold fast to the rein of justice and equity for all people. This is particularly true in the cause of Black Freedom and social justice.  Judge Damon Keith for a half century has led in this cause. An icon in the civil rights community, he has rendered uncompromising decisions from punishing illegal government wiretapping, and the racial motivation of building a wall of segregation around the City of Pontiac.

He would certainly be a thorn in the judicial side of this current administration and its treacherous policies of family separation and deportation. He was an early opponent in the judicial process to expose secret deportations and government abuse of its authority.  Judge Keith will long be remembered for his work off the bench with the NAACP. He was an early organizer and supporter of the largest sit-down Dinner in the nation, the Annual Fight For Freedom Fund Dinner of the Detroit Branch.

He was a great supporter an advocate for the City of Detroit and for African American political empowerment. Judge Keith represents an era of bold, an courageous, judicial principles.  These principles helped guide precedents for those  too cautious to be just and sometimes too afraid to stand alone! In the words of Congresswoman Maxine Waters, “I have the gavel and I am not afraid to use it!” Judge Keith used the judicial gavel to open doors and knock down barriers.

Judge Keith will long be remembered as a true follower and believer in the works and direction of the great attorney an civil rights lawyer Charles Hamilton Houston, who said, “A lawyer is either a social engineer or he is a parasite on society.” Thank you Judge Keith for being a social engineer.  We have a spoiler alert! Look out heaven, here comes the Judge!!" - Rev. Dr. Wendell Anthony, Detroit Branch NAACP President

Rhonda Walker has been helping Detroiters get motivated and ready for the day for the past 22 years. A confessed morning person, this award winning talented and versatile journalist starts her day at 2:00 am to co-anchor the weekday morning newscast at WDIV-Local 4 News. A position she’s held since 2003.