Michigan man went to music festival a year ago, not seen since

HIGHLAND TOWNSHIP, Mich. – The Local 4 Defenders are looking into the mysterious disappearance of an Oakland County man who went to a music festival last year.

There have been possible sightings and word of him possibly joining a cult. Investigators want to know if this was a case of murder.

Kevin Graves, 28, took a trip with his girlfriend last June to the small town of Rothbury, Michigan, for the Electric Forest music festival.

Rothbury has a population of just over 400 people and is described as quaint and quiet. That changed the last week in June 2018, when tens of thousands of people descended on the community for the festival.

"I knew there would be drugs and stuff up there," said Gary Graves, Kevin Graves' father. "I told him, you know, 'Be careful. Don't get yourself hooked up on something that you're going to regret.' He said, 'No, I'm just going to go up there and have a good time, dad.'"

Gary Graves hasn't seen his son since that conversation. Kevin Graves and his girlfriend arrived in Rothbury June 27. Four days later, his parents got a call.

"His girlfriend calls and says, 'I can't find Kevin,'" said Cathleen Graves, Kevin Graves' mother. "I said, 'What do you mean you can't find Kevin?' Apparently, they got into some argument, according to the people that were there. I think he saw something. That's my gut -- and it upset him so much that he just walked away."

Search and rescue teams are still trying to find out what happened in that forest. They're investigating whether Kevin Graves is still alive, who could want him dead or if something else happened.

Gary Graves said he remembers the last text he received from his son on the day he went missing.

"All it said was, 'Dad, I love you for your service. I love you and someday I will pay you back everything I owe you,'" Gary Graves said. "That was the last thing I heard from him. I texted him back and I never got any answers back."

"I texted him," Cathleen Graves said. "I was a little worried, and I said, 'Are you having a good time?' He texted me back with the word, 'Nothing.' So that got my a little concerned, and then I texted back, 'Are you OK?' 'Nothing' is what he texted back, and that was it.

"A theory is I always felt that he had just walked away, but it's come to the point where from everything we've been able to search and find out. We almost feel it's now a rescue."

Kevin Graves' sister said witnesses remember seeing buses at the festival connected to a cult. She wonders if he wandered off and joined.

"The mom in me thinks that he's out there somewhere," Cathleen Graves said. "You know, maybe he got a ride with somebody -- but then it's for so long. For him not to be in contact is so out of character for him."

Some have told the family they thought they saw Kevin Graves panhandling weeks after he went missing.

"The description of clothes he was wearing, and he was, like, hungry and wanted something," Cathleen Graves said. "I don't know if that was Kevin or not."

Local 4 Defenders cameras went to the forest during a Saturday morning search.

"I think he's out there somewhere, but I don't know where," Gary Graves said. "We've got to find him."

On the morning of this search, the rescue team found a woman's wallet. A tent in the middle of the woods was searched, but there were no signs of Kevin Graves.

The team also found bones, but said they don't appear to be human.

They didn't find anything to give them answers about what happened to the 28-year-old man.

"Every day is rough, you know?" Cathleen Graves said. "We try to go on with our lives. We just take one day at a time."

"There's still got to be an answer somewhere, and we're just going to keep going until we find him," Gary Graves said. "We're not giving up. We don't give up."

The Graves family will be at the Electric Forest music festival next week when it begins, talking to people and trying to find any clues about what happened to their son.

Anyone with information on the case is asked to call Crime Stoppers at 1-800-SPEAK-UP. Officials are offering a $1,000 reward. 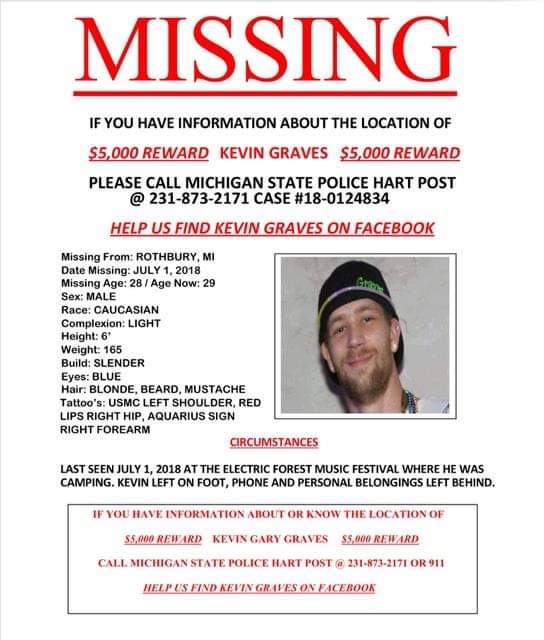 Karen Drew is the anchor of Local 4 News First at 4, weekdays at 4 p.m. She is also an award-winning investigative reporter and part of the Local 4 Defenders team.