‘The cemetery is sacred ground’

CLINTON TOWNSHIP, Mich. – A family is upset with how they said a Clinton Township cemetery treated their father’s gravesite.

They said the gravesite was disturbed and the cemetery gave them explanations that just didn’t make any sense.

Then, secret photos were shared with the family. Now, questions are being asked about how the dead are being treated at Resurrection Cemetery in Clinton Township.

It is a family tradition for the Trottier family to be buried at Resurrection Cemetery. They are devout Catholics.

When Terry Jowett’s father died in 1992, he was laid to rest at the cemetery. The family visited his gravesite often, but a visit in early 2021 left them heartbroken.

“The cemetery is sacred ground,” said daughter Jowett. “It’s where you lay your loved ones, you go to rest. We found what looked like my parents’ gravesites were disturbed and looked like graves where both of them were opened. The headstones were tossed aside.”

The family reached out to the management at the cemetery, but they weren’t satisfied with the answers.

“They told me that they were doing a burial next to my dad and that they noticed that my dad’s vault was compromised,” Jowett said. “‘But out of the goodness of my heart, we decided to replace your dad’s vault.’”

Jowett is in the funeral business. She said that answer didn’t sit right with her. 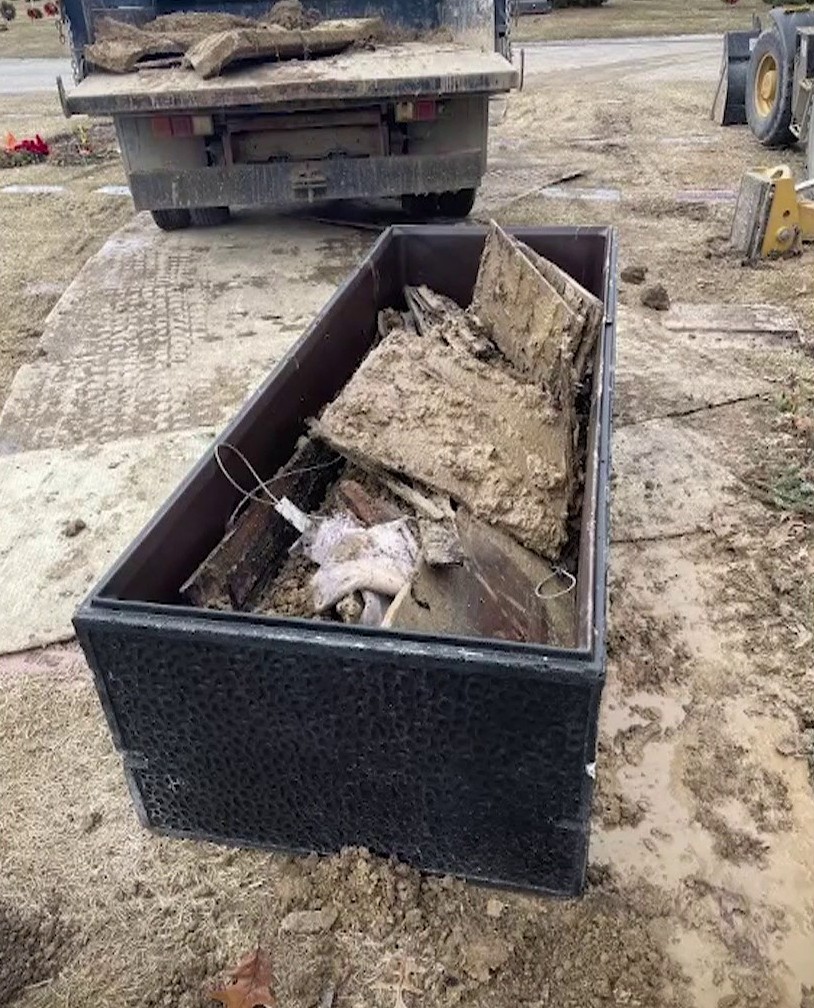 She said they never asked permission from her family. Then, photos were sent to the family showing her father’s vault open.

“Whoever took these photos knew there was something going on?” Local 4′s Karen Drew asked.

“Correct,” Jowett said. “Well, obviously they weren’t supposed to do, but in a whole manner, that was disrespectful.”

Jowett said the family didn’t want to leave her father’s gravesite that way. The family was worried about how the remains were kept, and they wanted him exhumed and placed in a new vault.

“The cemetery just keeps putting roadblocks up,” Jowett said. “The dates we want are unacceptable. They don’t have crews available.”

“Michigan and other states, they’re unique because there’s actually state laws about how you handle the debt and the remains, and we’re of the opinion that they clearly violate that law,” Bologna said.

No one from Resurrection Cemetery was willing to go on camera, but they did release the following statement:

“As part of our responsibility to care for the final resting places for our families, there are times when maintenance is needed. We can’t comment on the specifics of the maintenance associated with this ongoing legal matter, but what we can say is the legal complaint consists of extensive inaccuracies and embellishments.

In this situation, there was a breakdown in our communication process. The way in which the family learned about the issue was not how we strive to meet our families’ expectations. We have met with this family, apologized for the communication gap, and made repeated offers to try to reach a resolution, including absorbing all associated expenses, but the family has declined.

We take the matter of providing a final resting place for those families and individuals we serve very seriously. Our crews strive to perform their jobs with the utmost dignity, reverence and respect for those who have passed, and we are proud of our reputation of service to families throughout Southeastern Michigan since 1841.”

As the family battles it out in the courtroom, they continue to visit their father’s gravesite, praying he can truly be at rest someday.

“I don’t trust them,” Jowett said. “I don’t know if they’ve done this to other families that have no idea because if we hadn’t driven by that cemetery, they would have just covered it up.”

A judge has granted the family permission to disinter their father’s body. That is expected to happen next week.

Karen Drew is the anchor of Local 4 News First at 4, weekdays at 4 p.m. and 5:30 p.m. She is also an award-winning investigative reporter and part of the Local 4 Defenders team.