Michigan football: Predicting the starters at every position

ANN ARBOR, Mich. – Michigan football season is just days away, but Jim Harbaugh isn't one to show his cards if he doesn't have to.

Harbaugh fought tooth and nail not to release an official roster, let alone a depth chart, so we're left to make educated guesses about who will take the field Saturday against Florida.

Some of the choices are obvious, but with 17 new starting positions to fill, it's one of the toughest starting lineups to predict in recent Michigan memory.

That doesn't mean we shouldn't try!

Few coaches are as unpredictable as Harbaugh, but here's a look at which players might be starting when the Wolverines kick off in Dallas. 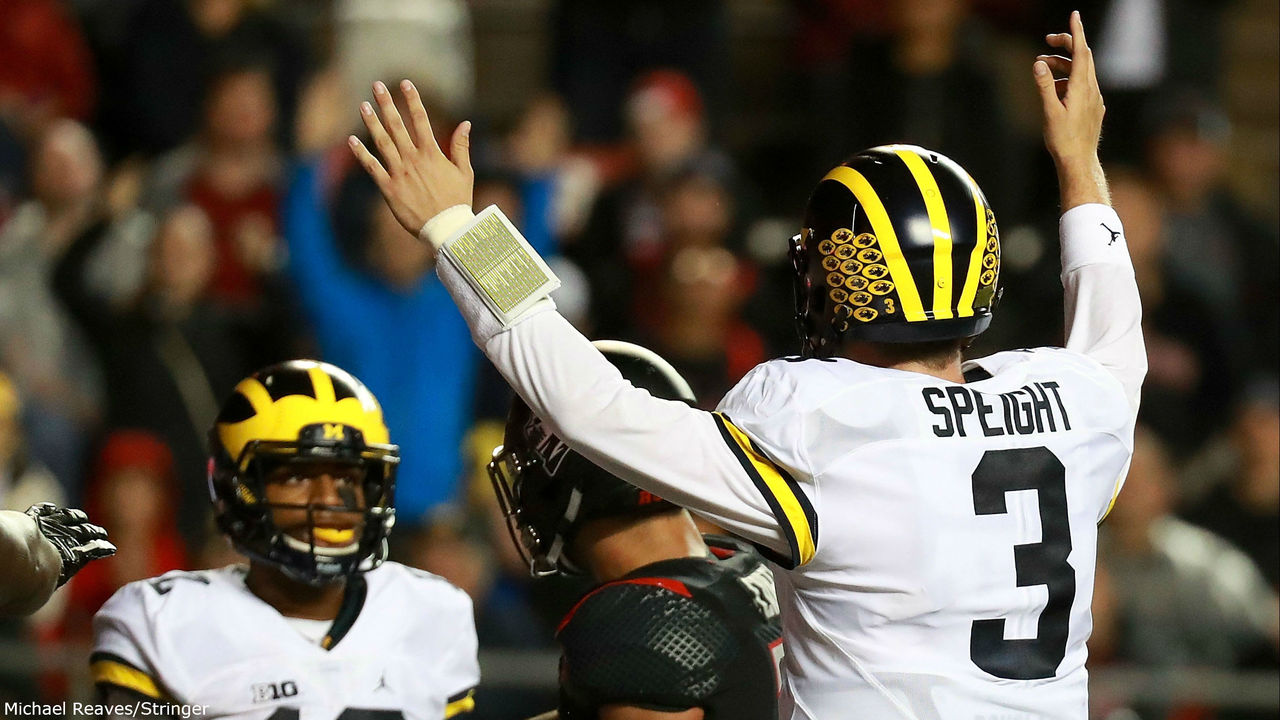 This is an easy one. It's Wilton Speight. Even though Harbaugh loves competition and insists Speight and O'Korn are still duking it out in practice, it will be shocking if Speight isn't under center when the offense takes the field.

Speight was very good for most of his first year as Michigan's starter, passing for an average of 228.1 yards in his first nine games with 15 touchdown passes and three interceptions. He wasn't nearly as effective after a shoulder injury against Iowa, but a fully healthy Speight with another year of work under Harbaugh should be a more than capable starter. 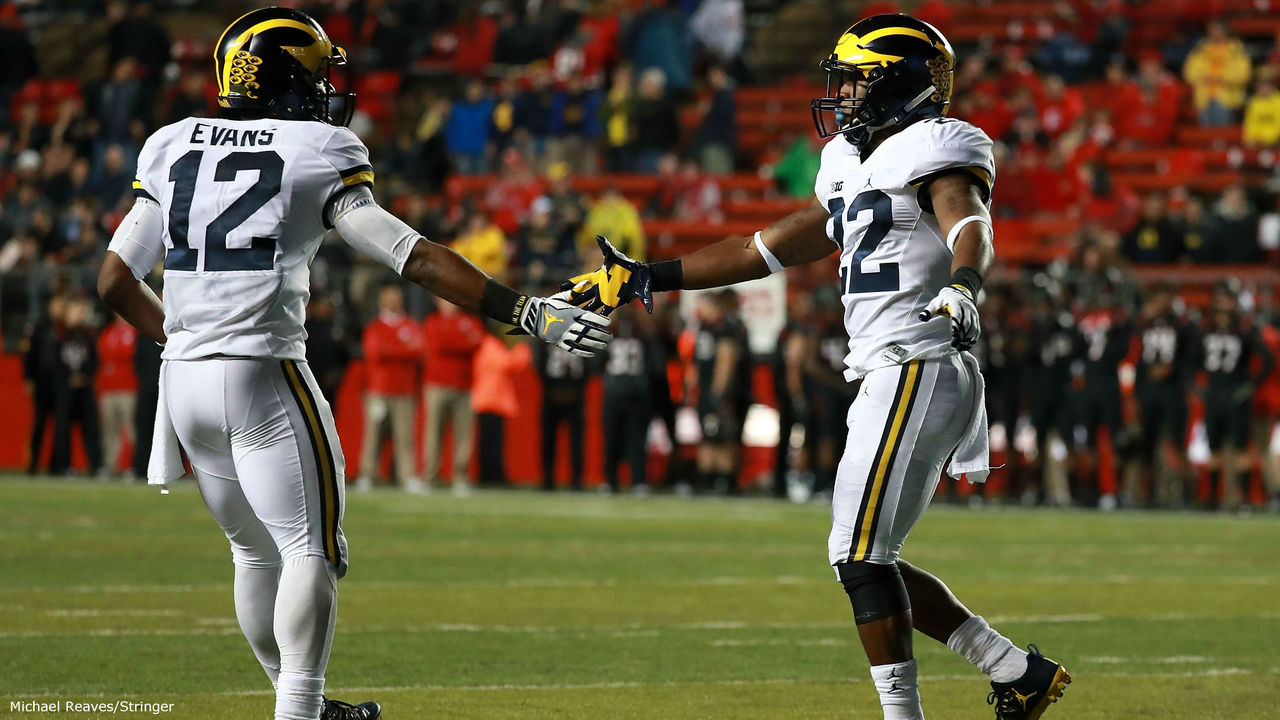 Harbaugh has options at running back, but Chris Evans has the most experience and the most upside.

Evans carried the ball 88 times last season, more than any returning player on Michigan's roster. He averaged 7 yards per carry and found the end zone four times. With his speed and quickness, Evans can turn any run into a touchdown.

Evans has the skill set to be a contributor in the passing game out of the backfield, but he had only six catches as a true freshman. If he can improve in that regard, and with his pass blocking, he'll win the starting job running away. 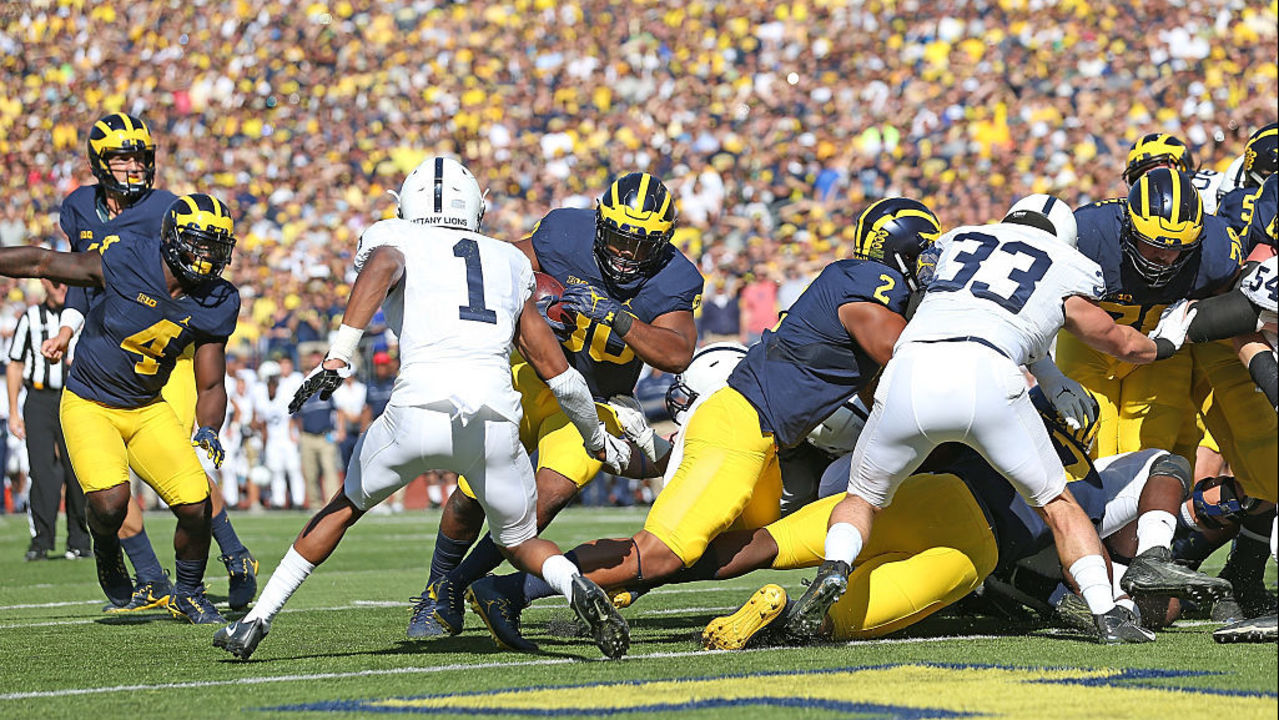 Depending on how you look at it, Michigan might or might not technically have a starting fullback. But Harbaugh runs so many formations with a fullback, it wouldn't feel right excluding the position.

The starter will be Khalid Hill, who decided to return for another season after scoring 13 touchdowns on 25 carries and 16 catches last season. Hill was used primarily in goal-line and short-yardage situations, and he's absolutely invaluable in the role.

Remember when Michigan couldn't score a touchdown on a drive that started on the 1-yard line in the Orange Bowl? That won't happen very often because of Hill, who was effective even when the defense knew he was coming.

With no starters returning and so many young players in the mix, wide receiver is probably the most difficult position to predict.

The third spot will likely go to one of the four true freshmen who made up the best receiving class in the nation. Tarik Black and Donovan Peoples-Jones have an edge because they enrolled in January and spent five more months on campus than Nico Collins or Oliver Martin.

Even though Peoples-Jones was the No. 1 wide receiver recruit in the country, I'll go with Tarik Black as the third starting receiver. Black was the most impressive wideout during the Michigan spring game, and he appeared to be the most polished freshman in the group. 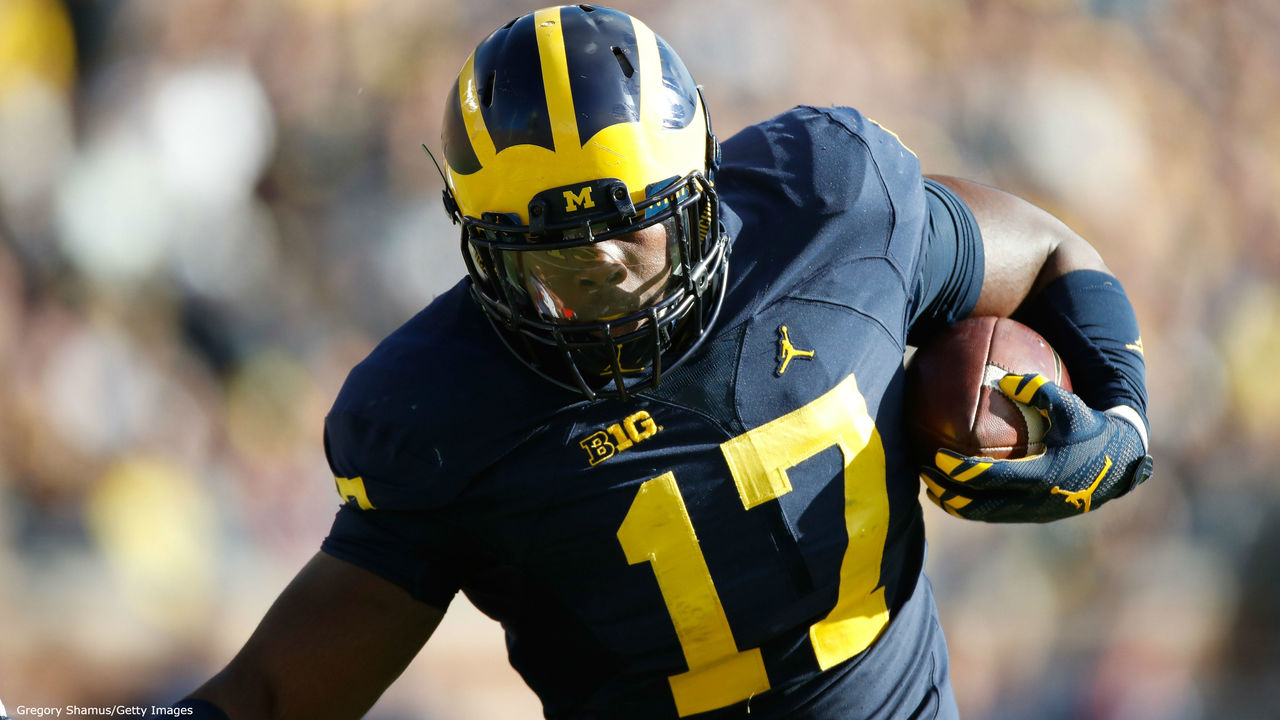 Harbaugh has brought several talented tight ends to Ann Arbor through his first three recruiting classes, but it feels like a two-man battle for the top spot.

I'm going purely with upside and saying Tyrone Wheatley Jr. will be the No. 1 tight end. He's a matchup nightmare at 6-6 and 276 pounds, and Speight will need a big target to replace Jake Butt. Wheatley scored a touchdown in the spring game, showing he has good hands and can make plays after the catch.

In two tight end sets, Ian Bunting will be the other prominent player. Bunting is the most experienced tight end on the roster with five catches in each of the last two seasons. At 6-7, 252 pounds, his size is also a major plus. 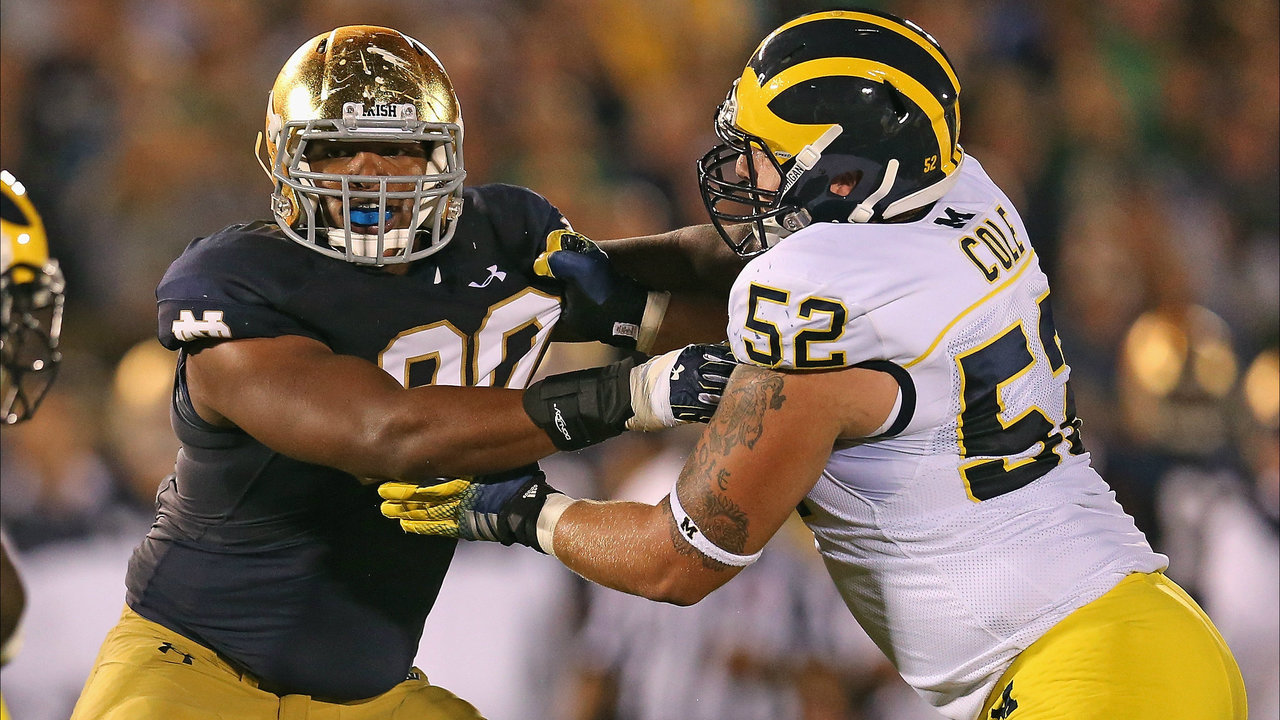 The only sure starters on the offensive line are Mason Cole and Ben Bredeson, who were the top performers a year ago. Cole's position isn't an absolute lock, but it appears he'll move back to left tackle -- where he played as a true freshman -- after being named to the All-Big Ten Second Team as a center.

Bredeson started eight games as a true freshman at left guard and was an All-Big Ten honorable mention. There's no reason to believe he'll be removed from that spot the next two seasons.

The other guard position will likely be filled by Michael Onwenu, an absolutely huge lineman who played both ways as a true freshman. Onwenu filled in at right guard in four games last season, and Harbaugh said the 6-3, 350-pound sophomore worked on his quickness throughout the offseason.

Center is big question mark, and I was originally leaning toward true freshman Cesar Ruiz over veteran Patrick Kugler. Ruiz is the No. 1 freshman center in the country and benefits from being an early enrollee, but Kugler played in five games last season and held his own, so it's probably safe to say he'll at least start the opener. Kugler will also benefit from the move to center, where he played his best football last year.

I expected Juwann Bushell-Beatty to earn the starting job at right tackle, which might be the weakest spot on Michigan's line. He took over for an injured Grant Newsome at left tackle last season and played eight games on the offensive line. However, 247 Sports is reporting redshirt sophomore Nolan Ulizio won the job. Ulizio was an unheralded recruit in Harbaugh's first class, but it appears he put in the work to beat out Bushell-Beatty and the athletic Jon Runyan Jr.

Unlike its offensive counterpart, the defensive line is straightforward. Rashan Gary will make his highly anticipated move to the starting four after playing in all 13 games last season. Gary was the No. 1 overall recruit in 2016 and could turn into the best defensive lineman in the nation this season.

On the other end of the line will be Chase Winovich, who made a major impact as a rotation player in 2016. Winovich finished the year with 35 tackles, 9.5 tackles for loss and five sacks, which is why he's expected to be a breakout player on defense when he slides into a starting role.

Maurice Hurst returns for another year after making 11.5 tackles for loss and 4.5 sacks as a backup last season. Hurst is an NFL-caliber defensive tackle who will lead the charge for Don Brown's run defense.

The least established starter will be defensive tackle Bryan Mone, who missed almost all of 2015 and the early parts of 2016 with injuries. It seemed like Mone never caught up after missing three of Michigan's first four games last year, but now he's healthy and expected to start alongside Hurst. 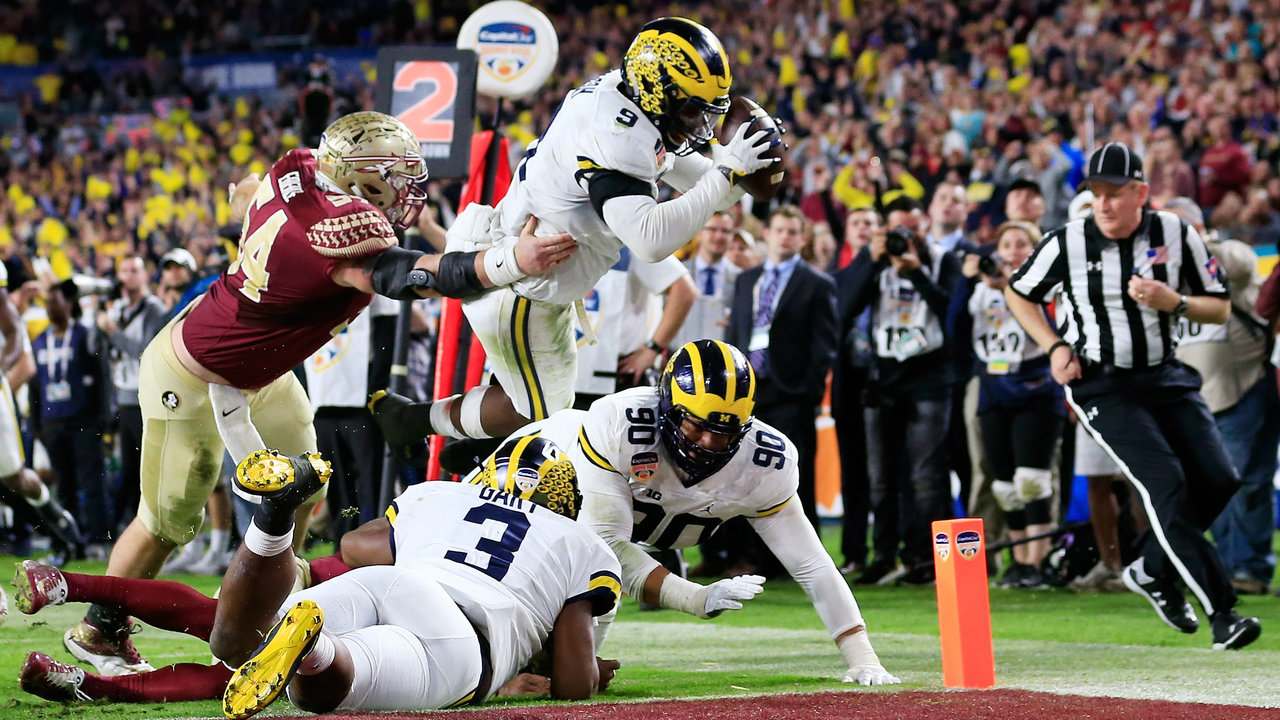 There's only one starter back from Michigan's dominant 2016 defense, and it's linebacker Mike McCray. Like Mone, McCray had battled injuries throughout his career, but he thrived last season and will be thrust into a leadership role when this season kicks off.

Devin Bush looked like Michigan's best linebacker during the spring game, which is no surprise after his strong work on special teams as a true freshman. Bush is a hard hitter who has a nose for the football, and it wouldn't be surprising to see him lead the Wolverines in tackles.

Michigan only plays two traditional linebackers, as the third spot -- made famous by Jabrill Peppers -- is taken by the viper. It's impossible to replace a talent like Peppers, but Harbaugh brought in Khaleke Hudson to give it his best shot. Hudson has the so-called Swiss Army knife skill set needed to fill the position, as he can make stops behind the line of scrimmage and drop back into coverage if necessary. 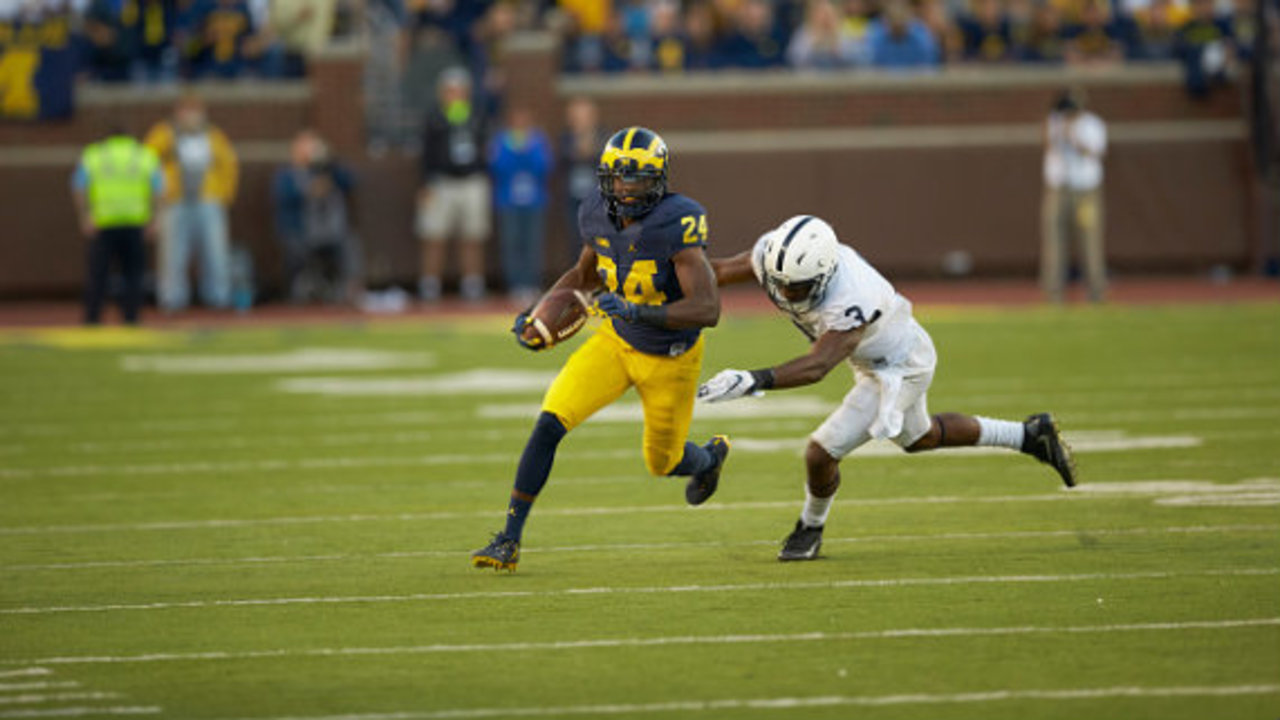 The secondary is one of the greatest concerns for Michigan coming into the season, as Brown looks to move on from star cornerback duo Jourdan Lewis and Channing Stribling.

Sophomore Lavert Hill seems like the only sure bet, as he played cornerback in nine games last season, including games against Ohio State and Florida State at the end of the season. Hill was an elite playmaker at Martin Luther King High School in Detroit, so Harbaugh is likely hoping he can make force turnovers to cover for the mistakes that are sure to come with being a young defensive back.

It feels like the other cornerback spot is up in the air, but I'll give the edge to Brandon Watson because cornerback is such a difficult position for inexperienced players. David Long has a higher ceiling, but Watson played cornerback in all 13 games last season. That might be enough to give him the starting nod, at least for the first game. 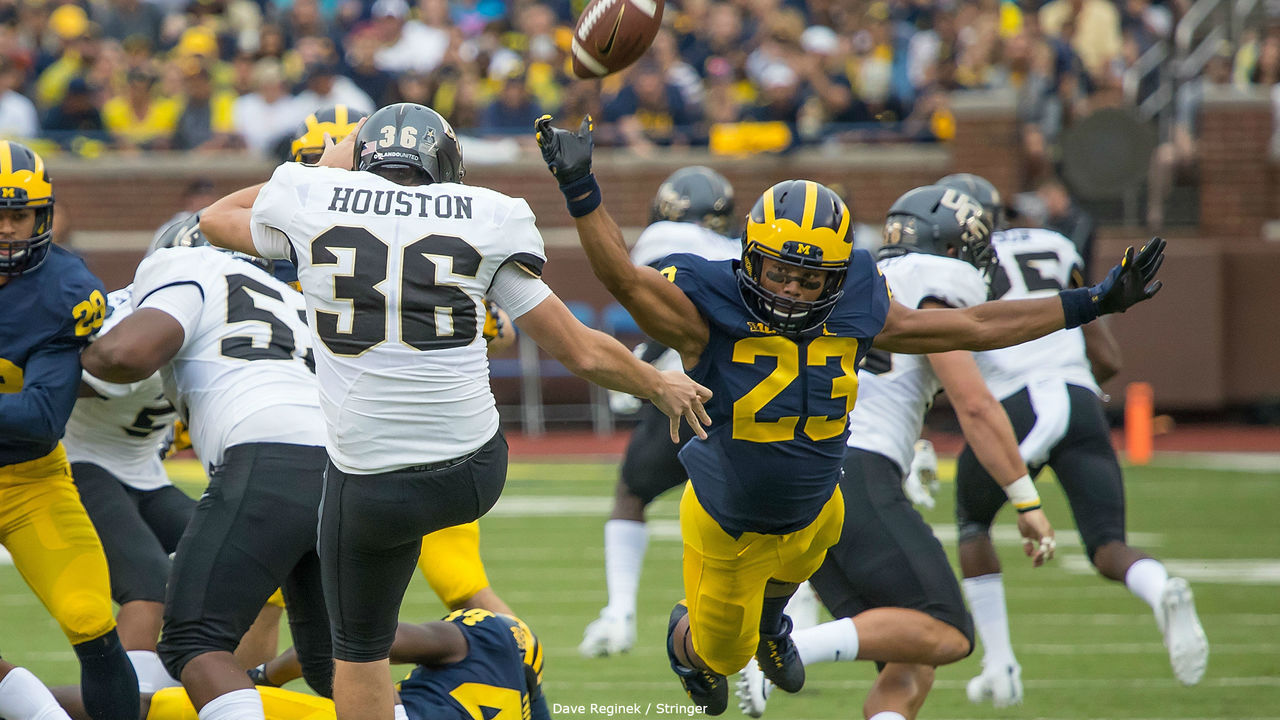 Michigan will have to replace two solid veterans -- Delano Hill and Dymonte Thomas -- at safety this season, but the position is in good hands.

Tyree Kinnel is one of the players who has impressed me most from Harbaugh's first recruiting class at Michigan. The junior safety played in all 13 games last season and seems to get better every time he steps on the field. He's a hard hitter who can close on receivers quickly and make a big play.

The other starter is likely to be Josh Metellus, who made 15 tackles as a true freshman. Metellus can deliver bruising hits from the safety position, but he's also spent time at viper because he's so versatile. When he made a spot start for Peppers in the Orange Bowl, he contributed six tackles and returned a blocked extra point for a score.

The Wolverines have to replace a ton of experience in the kicking game after Kenny Allen's graduation, but they're in good hands with Quinn Nordin. Harbaugh wanted Nordon bad enough to spend the night at his house during the recruiting process, and fans saw why during the spring game when the youngster blasted a long field goal that had enough behind it for at least 60 yards.

There are only two punters listed on Michigan's official roster, so it looks like Brad Robbins will be the starter as a true freshman. He was ranked the No. 1 punter in the country by Kornblue Kicking and was offered a scholarship late in the recruiting process.

Michigan has countless options to return kicks and punts, but I'll go with true freshman receiver Oliver Martin. Harbaugh has said Martin is ready to contribute this season, but there are so many talented receivers on the roster, he might get buried on offense. The return game is one way Harbaugh can get Martin into the mix and utilize his ability to make plays in space.