Detroit Pistons playoff scenarios: It all comes down to last two games

The Detroit Pistons are holding onto their playoff hopes by a thread after a fourth straight loss on Sunday afternoon.

The Pistons, who were in the sixth seed just a week ago, are now in the eighth spot in the East, fighting for the last spot in the playoff race.

The Nets and Magic, teams they have been battling for the final three spots, both clinched on Sunday.

Detroit, with an injured Blake Griffin, could have clinched yesterday with a win over the Charlotte Hornets at home, but couldn't overcome a 23-point first half deficit.

Both Charlotte and Miami stayed because of the Pistons’ loss, each a game behind Detroit. But while Charlotte swept the season series with the Pistons to own the head-to-head tiebreaker, the Pistons hold the tiebreaker over Miami. The Pistons could qualify for the postseason with a 40-42 record, but the only guarantee for them is to get to 41 wins, unattainable for both the Heat and Hornets.

So, their playoff hopes are not dead. The Pistons have two games left and they're both against non-playoff teams: Memphis at home and on the road in New York.

They're battling with Charlotte and Miami for the final spot. The Pistons have the easiest remaining schedule.

So, basically, if the Pistons win-out, they're in. They can get up to the seventh seed, which is ideal, to avoid playing the Bucks in the first round, with a tie-breaker over Orlando. The Pistons have played the No. 2 seed Raptors well this year, winning all three match ups.

The Heat would need the Hornets and Pistons to lose out, while they win out, to make it. So, long shot for Miami. The Pistons would still get in going 1-1 in their final two, if the Hornets lose one.

Pistons control their own destiny. If they take care of business in the final two games, they're in, possibly up to the seventh seed. If not, they'll need to hope for a Hornets loss against the Cavs or Magic.

The Pistons will also want Orlando to lose their final two games against the Celtics and Hornets, if they want to get up to seventh.

So, if Pistons win out, Orlando loses out and Hornets win out or split, the final three in the East would be Nets, Pistons, Magic. My head hurts.

Pistons play Memphis on Tuesday at 7 p.m. and New York on Wednesday at 8 p.m.

Here's a look at the standings: 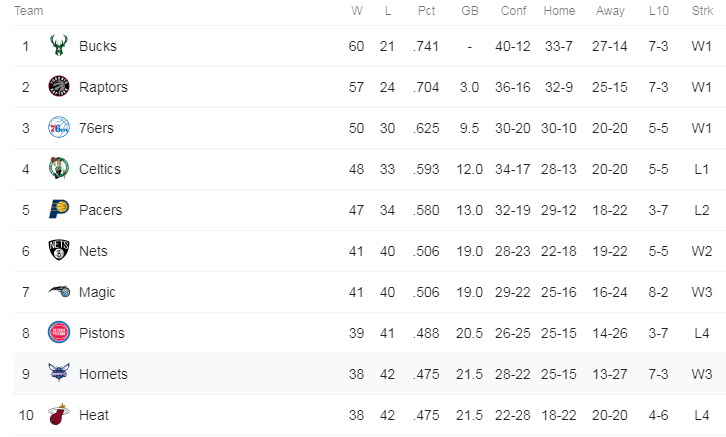