DETROIT – The Detroit Tigers finally put some offense on display Thursday in a 10-3 thrashing of the Los Angeles Angels, but it was once again the pitching throughout the organization that offered a glimpse into the future.

Matt Boyd was excellent again at the major league level while Alex Faedo tossed another quality start for Double-A Erie. The SeaWolves rotation features three of the organization's top 10 prospects, and all are off to strong starts this season.

So, as the Tigers continue to flirt with .500 without being true playoff contenders, fans are wondering: What does this mean for the future?

In the offseason, we tried to predict what the perfect starting rotation would look like for the Tigers by the start of 2021, two seasons from now.

Here's how that looked (Click here to read the story):

Well, injury and performance have certainly changed that list, and as of right now, only two or three of those players seem likely to be part of the rotation by the time the Tigers are ready to be competitive again.

With about a fifth of a season's worth of results to look at, here's an updated prediction of how the starting rotation will look in two years. 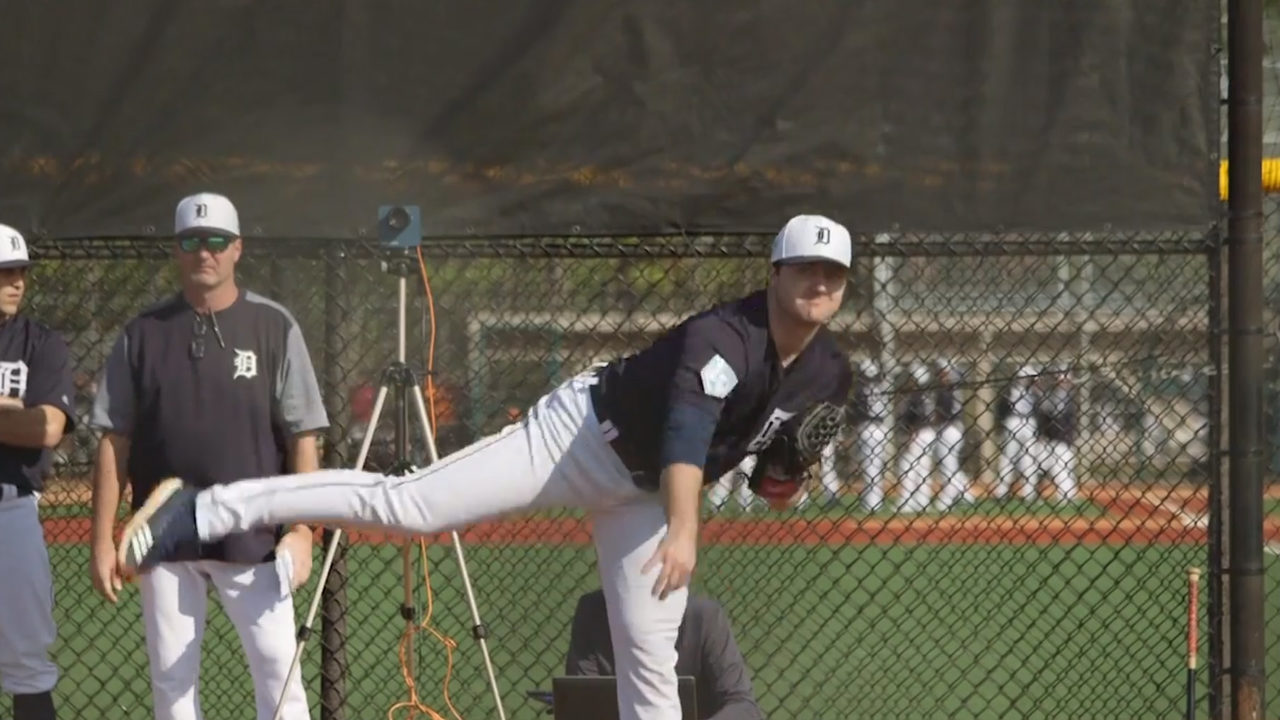 Mize made headlines across the country last week when he threw a no-hitter in his first Double-A start. But he was quietly dominating minor league hitters well before that start.

Perhaps the most encouraging part of Mize's stat line is his elite strikeout-to-walk ratio, which has carried over from college. That's one of the main reasons the Tigers took him with the No. 1 overall pick in 2018.

Mize is averaging less than a strikeout per inning, but that's largely because he's facing so few batters in every start. When you consider his strikeout percentage is 27.5% -- 36 strikeouts in 131 batters faced -- his strikout level looks much better.

Of those 131 batters, only 13 have reached base. No pitcher has been more dominant at any level this year.

While he hasn't thrown a pitch above Double-A, it's clear Mize has the stuff to be a top-of-the-rotation arm in Detroit. He's barely 22 years old, but the team's No. 1 prospect is already on the fast track to the big leagues.

It's definitely a surprise to see Boyd on this list, especially as high as No. 2, but he's been one of the top pitching breakouts in all of baseball this season.

Boyd showed promising strikeout gains last year and posted his best all-around season as a pro. He couldn't quite pair the elevated strikeout rate with consistent run prevention, though, and that kept him from cracking our predicted rotation in the offseason.

It's only been eight starts, but Boyd has shattered those fears, striking out 11.3 batters per nine innings while posting a WHIP well below 1.00. He leads all of baseball with a 2.30 FIP, which suggests his performance has had very little to do with luck.

Boyd is throwing his best pitch -- the slider -- more often and has basically ditched the curveball and change-up. He's become a consistent strikeout pitcher by working up in the zone with his fastball and burying the slider at the back foot of right-handed batters.

Boyd has been on the roster since 2015, but he's only 28 years old and is under team control through 2022. Barring a collapse or an unforeseen trade, Boyd appears to be a player who's in the rotation to stay.

We predicted Manning to be the ace of the staff by 2021 in our offseason rankings, and he hasn't done anything to deserve being dropped to No. 3. Still, Mize's historical dominance and Boyd's performance against actual MLB hitters warrant their moves up the list.

Manning probably has the highest ceiling of any Tigers prospect. He's completely overpowering minor league hitters at the age of 21, whiffing 50 batters in 35.2 innings while only issuing eight free passes.

The Tigers drafted Manning with a first-round pick in 2016, and since then, he's struck out 312 batters in 233.2 innings with excellent ratios.

Like Mize, Manning has faced 131 batters this season -- all in Double-A. Only 26 have reached base. That means Manning is getting nearly twice as many strikeouts as base runners allowed.

Manning has the most overpowering stuff of any pitcher on this list, and he could probably strike out more than a batter per inning at the major league level if he was called up today.

It feels as if there's a bit of a drop off between the top three pitchers on this list and the rest of the pack, but in terms of results, Faedo deserves a little more respect.

Other than one disastrous start, Faedo has been remarkably consistent for the SeaWolves this season, posting six starts of at least six innings and fewer than three runs.

When the Tigers drafted him in the first round in 2017, Faedo was among the top 60 prospects in baseball. Unfortunately, his first year in the minors didn't go so well.

Faedo's strikeouts dropped and he allowed 15 home runs in 60 Double-A innings. When the 2019 season began, he had dropped well out of the top 100 prospects and ranked No. 10 in the Tigers' organization.

He's due for a bump when the rankings are adjusted midway through the season. Faedo is striking out more than a batter per inning and limiting base runners. Home runs are still a bit of an issue, but Faedo is a fly ball pitcher, so that's not a surprise.

Only 36 of 136 batters have reached base against Faedo this season, and if not for Mize and Manning, he would be the prospect Tigers fans are following every start.

The final spot in the future rotation is the most difficult to predict because it could go so many different ways.

Turnbull has to have the inside track right now, though, because he's the only player among the candidates who's actually pitching well.

Turnbull locked down a starting pitching spot out of spring training for the first time this year, and he's turned into the team's second-best starter.

Last season, Turnbull struggled in four appearances with the Tigers, but through seven starts this year, he's yet to have a truly bad outing.

He showed flashes of dominance on Opening Day in Detroit, striking out 10 batters while allowing just two runs in six innings. He's currently on a four-start stretch in which he's allowed just 14 hits and two earned runs in 24 innings while striking out 19.

Turnbull has been a breakout for the Tigers because he's missing bats and keeping the ball on the ground. His 11% swinging strike rate is very respectable and in the last four starts he's induced 39 ground balls compared to 27 fly balls.

While he's probably not as good as his 2.31 ERA suggests, Turnbull has a 3.31 FIP, which means he's been legitimately good in seven starts, which is about a quarter of a season for an MLB starting pitcher.

Turnbull isn't as exciting as the minor league prospects because his ceiling isn't as high, but unlike those prospects, he's had real success against major league hitters.

Another injury sidelined Perez for the start of the 2019 season, and now the time on the injured list is starting to add up for the prized piece of the Justin Verlander trade return.

Perez has as high a ceiling as any Tigers pitcher and is still ranked among the top 100 prospects in baseball. If he can stay healthy, his four-pitch arsenal of fastball, slider, curveball and change-up is as good as the organization has in the minor leagues.

He won't turn 22 until the offseason, so it's way too early to give up on Perez. But to put him ahead of the five players who made this list, we need to see him have some extended success without injury in the Tigers' farm system.

Most Tigers fans probably don't know this name, but they should. Skubal was Detroit's ninth-round pick in 2018, and he's already the ace of Lakeland's staff now that Mize has moved up to Double-A.

In six starts, Skubal has struck out 41 batters in 29.1 innings while allowing 22 hits and six walks. Batters are hitting just .206 against Skubal.

As promising as the Double-A rotation has been this season, the prospects in Triple-A Toledo have been major disappointments through the first month.

Burrows is the most obvious example, owning a 5.32 ERA and 1.352 WHIP through his first five starts. The 2015 first-round pick had been ranked among baseball's top 100 prospects before this year, but a rough 2018 season dropped him out of the organization's top five.

Burrows has had three bad starts in a row, allowing 14 earned runs in 13.1 innings. He's striking out more than a batter per inning this season, but his walk rate is elevated for the second straight year.

Like Perez, Burrows is still a young pitcher. He'll turn 23 at the end of the season, so there's still time for him to get back to his pre-2018 self and push for a spot in the Tigers' rotation.

There were reasons to be excited about Funkhouser coming into the season after he struck out a batter per inning in Double-A and got a promotion midway through last year.

He hasn't bounced back from the injury that shortened his 2018 campaign, though, walking 18 batters in 17.2 innings to completely overshadow his high strikeout rate.

Funkhouser was a first-round pick by the Los Angeles Dodgers in 2015 before falling to the Tigers in the fourth round of 2016, but as a 25-year-old struggling to make strides in Triple-A, he needs to turn things around quickly or risk getting completely passed over by all the prospects mentioned above.

Once the ace of the Tigers' staff, Fulmer regressed in 2018 and will miss the entire 2019 season due to injury. He's now 26 years old, and his part in the organization's future is definitely in question.

Fulmer outperformed his peripherals as a rookie in 2016, and his career 7 strikeouts per nine innings greatly limits his ceiling. He allowed 19 home runs in 132.1 innings while striking out just 110 batters in 2018, so he'll need to improve in both areas next year to keep himself in the running for a future rotation spot.