The privately owned vacant structure was last sold in August 1999 and had an assessed value of $9,400. 5 Crews battle fire at three-story vacant building in downtown SaginawThe three sites are located within a half-mile of each other. So far this year, Saginaw has experienced 67 structure fires, eight of which were intentionally set, Suchodolski said. There were 48 intentionally set fires of 2021′s total 158 structure fires. Read more:Suspicious building fires plaguing downtown Saginaw in recent weeksCrews battle fire at three-story vacant building in downtown SaginawFirefighters battle blaze at Saginaw County haunted woods, woman arrested on arson charge

‘They are all so innocent.’ A new podcast details how John List carried out one of N.J.’s worst killings.

The investigators remained at the house all night on Dec. 7, 1971, and into the next day. They bagged evidence, from bloodied paper towels to the murder weapons John List had carefully left for them. They took photographs of the mansion on the hill in Westfield, from the bodies of the List family members right down to the dead fish in their tank.

Florida’s efforts to keep beaches clean and save lives in the ocean are taking a high-tech turn with the introduction of a cleaning robot.

A 26-year-old Chicago woman is accused of taking the photo of slain Officer Ella French off her memorial, throwing it in the trash and later posting pictures of it on Twitter, prosecutors said at her bond hearing Thursday.

A mother smoked marijuana in the front seat, sheriff says. In the back, her 4-year-old found a gun and shot himself.

The sheriff's office hasn't filed charges but said prosecutors may choose to do so.

Woman stabbed to death and man killed by vehicle in Westminster

No arrests have been made after both died at the scene, on Chippenham Road in west London.

Police are treating Matthew Willson's death as a homicide, following gunfire from a nearby flat.

Germany: 65 children freed from abusers as part of probe

Oak Forest police are investigating two shootings Wednesday, including one in which three people were hurt when their vehicle was fired on

3 in Mexico who investigated killings were themselves probed

Three women who volunteered to investigate a 2011 massacre of 193 people later found out that they themselves had been investigated by prosecutors, possibly because their findings embarrassed Mexican authorities

For years after the accident at the Pike River mine, families lobbied for answers, but no charges were ever filed.

Monroe County Sheriff Troy Goodnough would like to make the public aware of the ongoing catalytic converter thefts from vehicles.

In August one local couple said a man barged into their home and took a bird. Now investigators say there’s a whole lot more to this story.

In August one local couple said a man barged into their home and took a bird. Now investigators say there’s a whole lot more to this story.

Top Golf failed to pay $750K in overtime to eligible employees, including 7 in Michigan, feds say

AUBURN HILLS, MI -- Top Golf is in hot water with the U.S. Department of Labor after investigators found they were not paying certain employees the overtime wages they were entitled to. According to a news release issued on Thursday, Top Golf, a popular entertainment chain known for golf driving ranges, bars, and restaurants, failed to pay $750,063 in back wages for 255 employees in 25 states. That includes a Michigan location in Auburn Hills where $6,630.11 is owed to seven employees, according to the U.S. Department of Labor. “Employers cannot evade federal overtime requirements by simply giving an employee a manager’s title,” said Wage and Hour Southwest Regional Administrator Betty Campbell in Dallas. Division investigators determined the employees did not meet the supervisory requirements and were eligible for overtime.

The Harper Woods Police Department is investigating a shooting that happened on Saturday at around 3:45 p.m. on Roscommon Street near Lansdowne Avenue.

Lots of pills were also found. “It is believed that the drugs are cartel-related” and were being moved from Atlanta to New York.

Another child dies in home elevator accident, days after regulators pushed for recall

The boy was discovered Saturday night trapped between the bottom of the elevator car and the home’s upper doorframe, according to Rich Shortway, fire chief in Corolla, N.C.

Four people are on trial for shooting down flight MH17 over eastern Ukraine, but none are in court.

James Burton McGrew was arrested in Glendale, Ariz., and charged in federal court in connection with the Jan. 6 attack.

Federal investigators are reportedly pushing for cooperation from two key witnesses in the probe of Rep. Matt Gaetz (R-Fla.), including his ex-girlfriend. Investigators are seeking cooperation from an ex-girlfriend of Gaetz who was formerly an intern on Capitol Hill, and they could also "soon gain the formal cooperation" of former Florida county tax collector Joel Greenberg, CNN reported on Tuesday. It had previously been reported that Greenberg was cooperating with investigators since last year, and according to CNN, a deadline for him to reach a plea agreement is coming this week. Greenberg has been charged with sex trafficking of a minor, stalking, and bribery. Gaetz has been facing an investigation over whether he had sex with a 17-year-old girl and violated federal sex trafficking laws. He has denied any wrongdoing. The former girlfriend investigators are seeking cooperation from reportedly joined the Florida lawmaker on a 2018 trip to the Bahamas that has become a focus of the investigation, and she was "involved in some of the financial transactions that the FBI has obtained" and is "believed to have knowledge of drug use and arrangements with women," CNN writes. Investigators are almost finished collecting evidence in the probe, CNN also reports, but it's expected to take "some time" for the Justice Department to determine whether there's enough evidence to support an indictment. Read more at CNN. More stories from theweek.com5 scathingly funny cartoons about anti-vaxxers jeopardizing herd immunityThe collapse of the GOP? It's just wishful thinkingDoomsday for bad bosses

‘I love my job’: Detroit police officer retires after 44 years

A police officer with more than four decades of experience with the Detroit Police Department will soon be retiring.

The U.S Department of Homeland Security Investigations is looking to recruit women to become special agents.

13 years after Madeleine McCann went missing, investigators believe they have a credible suspect

The relatives and friends of those shot hugged each other and called others to inform them of the news. By 9 a.m., a tow truck arrived to take away one of the vehicles involved in the shooting and police began to take down crime scene tape.

Investigators released new information in an arrest in a massive murder investigation. If you need help with the Public File, call (313) 222-0566.

The FDA is revising recall procedures

Government investigators focused on two recalls from 2014 where they said "consumers remained at risk of illness or death for several weeks after FDA knew of potentially hazardous food." Investigators found it took 165 days from when the product was identified, to the date of the firm's voluntary recall. Anna Werner has more.

Federal investigators in Southern California say they found what could be the longest cross-border drug tunnel, stretching from Tijuana in Mexico to San Diego. They announced Wednesday the tunnel’s discovery led to a massive drug bust. Carter Evans shows how agents seized nearly $30 million worth of drugs.

Investigators say a Palestinian rammed his car into a Jerusalem bus stop, and proceeded to stab several bystanders. CBS Radio News correspondent Robert Berger joins CBSN with more on the phone from Jerusalem

Although ExxonMobil told residents no one in the community was ever in any danger after a refinery exploded south of Los Angeles, federal investigators say the incident was a "near miss" for being catastrophic. Anna Werner reports from California.

7/25: Who was the La. movie theater gunman?; New Baseball Hall of Fame inductees

Investigators are uncovering more information about John Russell Houser, the gunman suspected of killing two people and himself at a movie theater in Lafayette, Louisiana Thursday night; Only about 1 percent of the over 20,000 big-leaguers ever make it into the Baseball Hall of Fame.

How investigators are narrowing search for Germanwings crash evidence 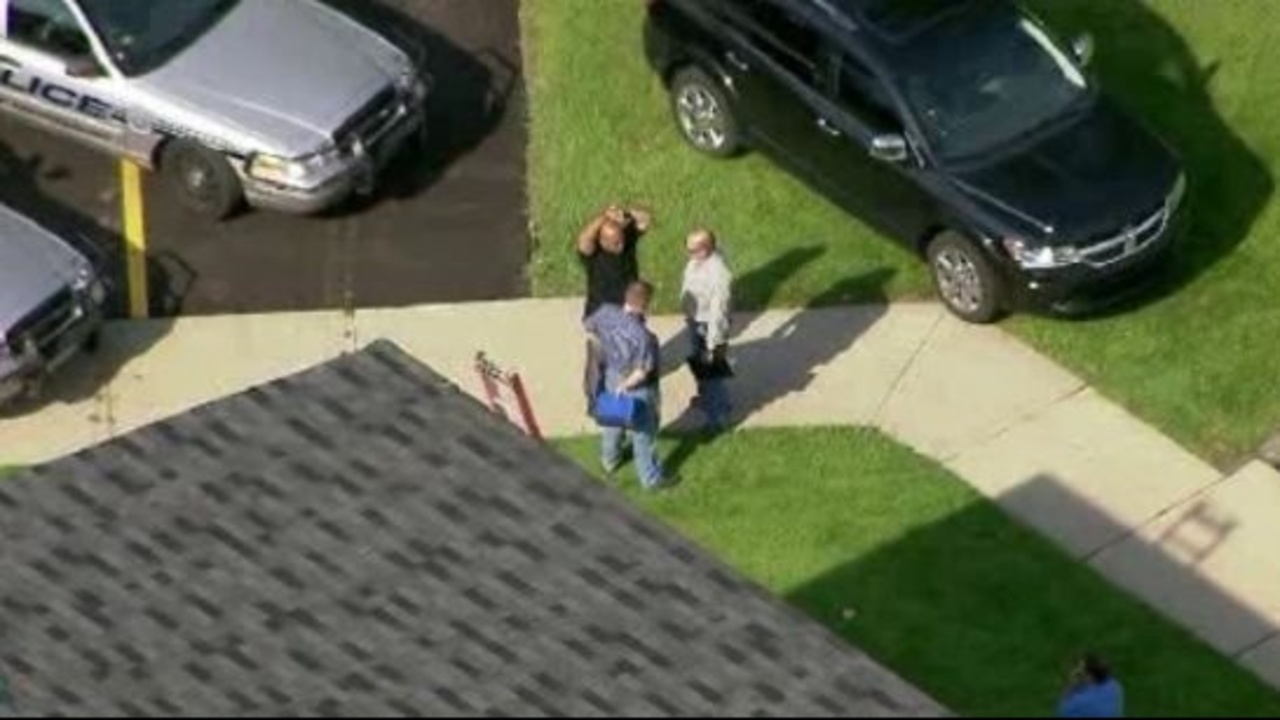 Investigators were dusting for fingerprints at a murder scene they call brutal and bloody in Clinton Township.