ANN ARBOR, Mich. – Right now you're probably wondering what a flex route is.

Simply put: A flex route is created when a highway shoulder is turned into a lane which can be used during periods of congested traffic. The goal is to reduce drive time while promoting safety.

According to the Michigan Department of Transportation, the state's first flex route system is ready to be completed by the end of 2017 on US-23 north of Ann Arbor between M-14 and M-36. Drivers will see what MDOT calls a lane control system comprised of overhead signs, cameras, and electronic message boards. The system will notify drivers about when the shoulder lane can be accessed. It also will offer drivers suggested speed limits during congested traffic periods and indicators for when and in which direction to merge.

MDOT said this stretch of US-23 is known for three-hour pulses of heavy rush hour traffic. The transportation department expects the flex route will reduce the rush hour drive time through this stretch by about 20 minutes.

Here's a quick video explainer of how the system works:

Below is a map showing what kind of construction MDOT is doing along the flex route section of US-23. Overall, the project will cost about $92 million. 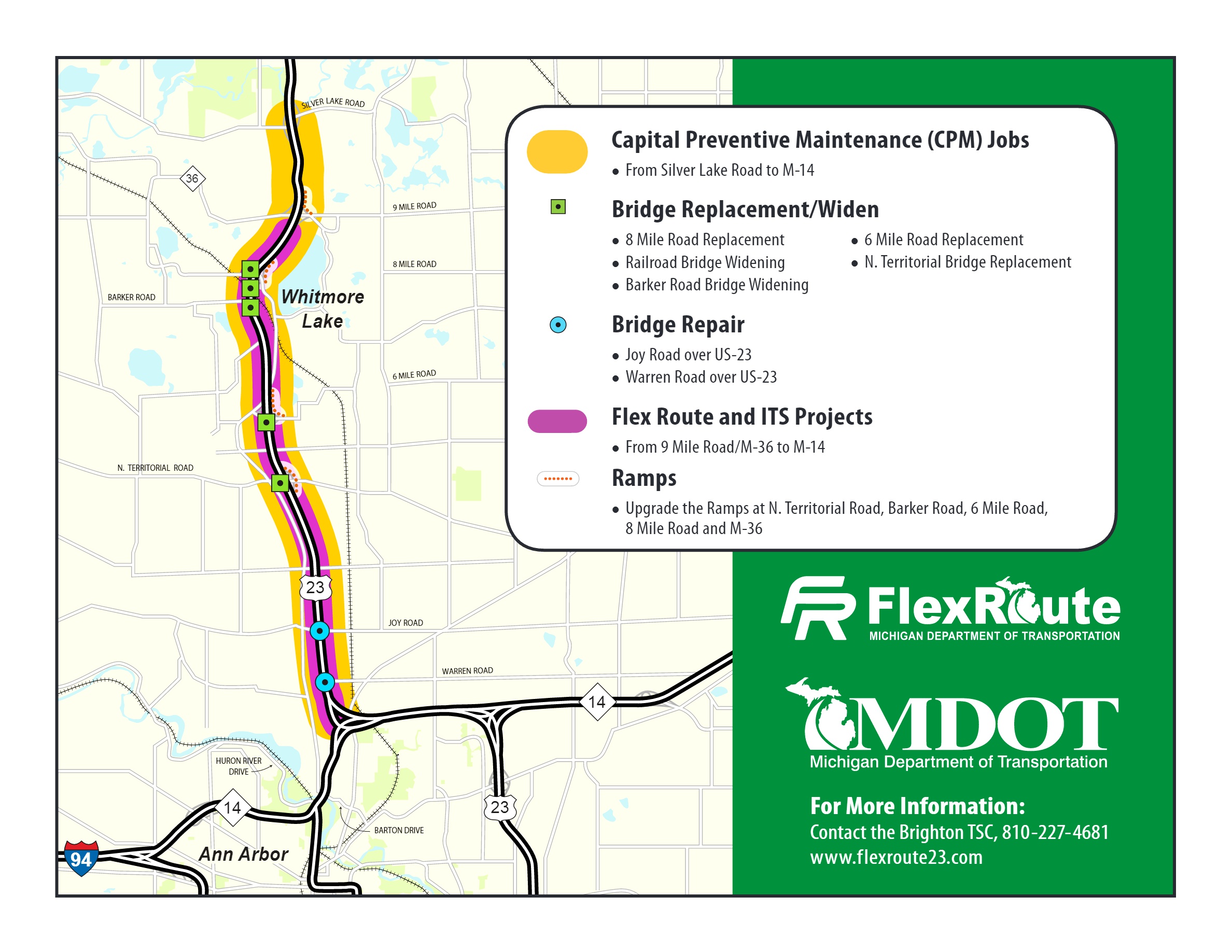 Why not just add another lane?

This was the first question we had here at ClickOnDetroit. MDOT offers this explanation:

"A 24-hour fix simply is not necessary on corridors that typically experience traffic slowdowns only during regular peak travel periods. It is more cost-effective to adapt the shoulder for use as a temporary third lane than it would be to install a third lane. Employing Flex Route technology enables to achieve more capacity out of the existing infrastructure for less money."

As for that "less money" part, MDOT's explanation is a flex route requires less capital because it "works within the existing infrastructure and doesn’t require the same degree of expansion to implement." It's the existing shoulder, after all.

Which leads us to another question: What if there is debris or a stalled vehicle on the shoulder? MDOT spokeswoman Kari Arend said the shoulder will be monitored by a team called "STOC" in Lansing. They will use the mounted cameras on the overhead to keep an eye on the flex route.

"If there is an obstacle on the shoulder like a large piece of debris or a stalled vehicle, STOC can contact our maintenance staff to remove it," Arend wrote in an email to ClickOnDetroit.

By the way, "STOC" stands for Statewide Transportation Operations Center.

Arend said the US-23 flex route should be operating by mid-to-late November.

A Flex Route is an active traffic management system that promotes safety and helps manage rush hour and seasonal traffic congestion by utilizing the median shoulder as a temporary third lane.

2. Where will the first Flex Route in Michigan be located?

MDOT is installing Michigan’s first Flex Route system on US-23 north of Ann Arbor, from M-14 to M-36.

3. Why was this route selected for the first Flex Route?

US-23 north of Ann Arbor was selected for Michigan’s first Flex Route because it is an area where rush hour and seasonal traffic congestion is commonplace, the surface needed to be rehabilitated, and the geography and narrow confines of the MDOT right of way made other options prohibitively expensive. The three-hour pulses of heavy traffic during morning (southbound) and evening (northbound) rush hours, and relatively lighter traffic outside of these time blocks, allowed us to right-size the solution to the problem using traffic management technology. Once completed next year, we expect to see an average rush hour drive time reduction of about 20 minutes through this stretch.

5. When will the Flex Route temporary lanes be opened?

The Flex Route temporary lanes will be opened for travel as needed during peak travel periods – typically during the morning commute on southbound lanes and the evening commute on northbound lanes – and when traffic is backed up because of heavy seasonal traffic and other temporary conditions, such as bad weather, traffic incidents or construction.

6. How does the Flex Route work?

The Flex Route will be monitored by MDOT’s Statewide Transportation Operations Center (STOC). The STOC is a seven-day-a-week operation that houses dispatchers from MDOT and Michigan State Police. The agencies share resources and information by monitoring traffic sensors, distress calls and video feeds from closed-circuit TV cameras. They also coordinate their efforts with law enforcement agencies and other transportation officials.

Flex Route will be connected to the STOC through the use of expanded intelligent transportation systems (ITS) technology. This will include an intelligent lane control system consisting of overhead signs, cameras, and electronic message boards, which STOC employees will monitor and adjust as needed.

If a traffic condition develops, the STOC will adjust the Flex Route through electronic lane control signs mounted above each lane. These signs will show motorists which lanes are available and provide the recommended speed for the current travel conditions.

Any traffic incidents will be managed with assistance from MDOT’s Freeway Courtesy Patrol (FCP) and several new crash investigation sites that will be strategically located along the corridor.

7. How will a driver know when the shoulder is to be used as a Flex Route?

A large green arrow posted above a widened shoulder (flex lane) will show when that Flex Route is available as a third lane.

A large red X above the widened shoulder (flex lane) will show when that Flex Route is not to be used.

Yellow chevrons will direct motorists to move over or merge to avoid incidents ahead.

8. Where are Flex Routes needed?

9. Why not just add another lane?

A 24-hour fix simply is not necessary on corridors that typically experience traffic slowdowns only during regular peak travel periods. It is more cost-effective to adapt the shoulder for use as a temporary third lane than it would be to install a third lane. Employing Flex Route technology enables to achieve more capacity out of the existing infrastructure for less money.

10. How does a Flex Route save money?

Implementing a Flex Route requires less capital than adding another lane – primarily because it works within the existing infrastructure and doesn’t require the same degree of expansion to implement.

11. Why would a different speed limit be recommended for the Flex Route when there's already one posted for US-23?

A lower recommended speed limit would be posted, for example, if motorists were approaching a traffic incident or other circumstances where slower speeds would promote safer travel, such as inclement weather and slippery roads.

12. What if a driver is not sure how to drive the new Flex Route?

Drivers need to familiarize themselves as to how a Flex Route works; they can start by viewing this brief video. If a driver is uncomfortable driving the Flex Route, MDOT recommends they handle it the same way that drivers should handle most any traffic situation: slow down and stay to the right.