State police investigate shooting along I-94 near Moross in Detroit 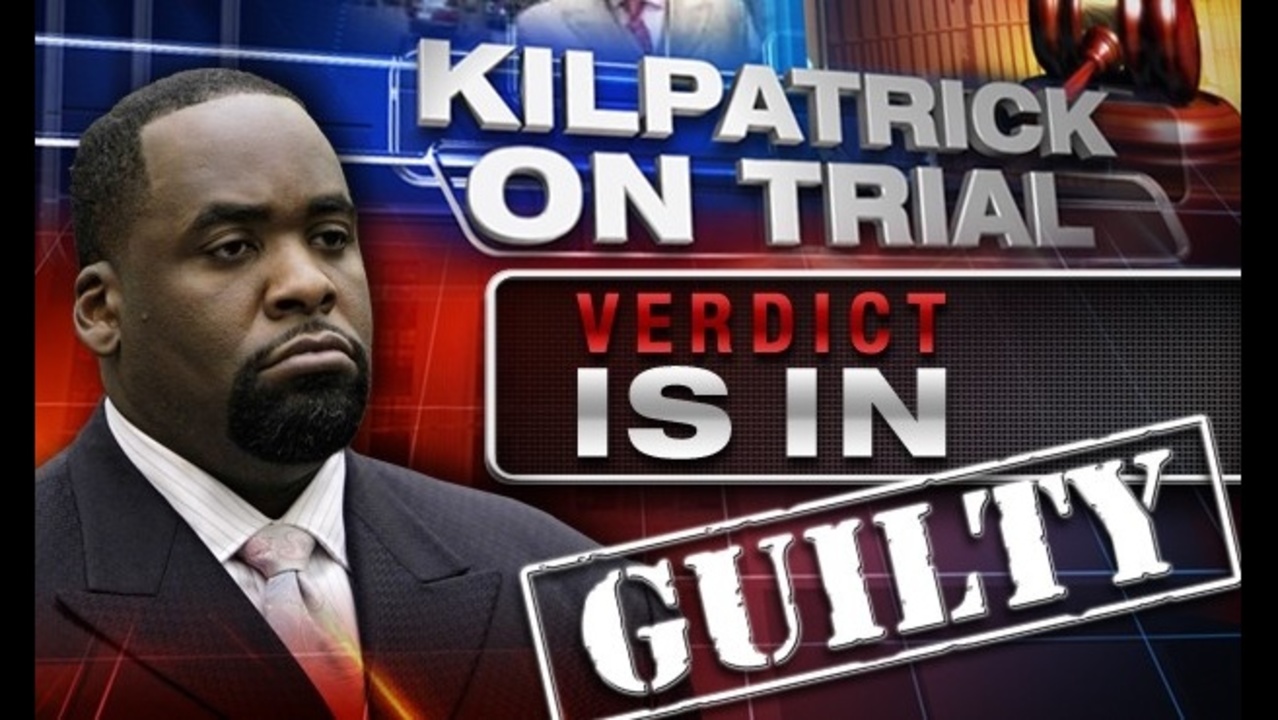 After announcing their verdicts Monday morning, the jury in the federal trial against former Detroit mayor Kwame Kilpatrick, his father Bernard Kilpatrick and his friend Bobby Ferguson answered questions from the media.

Rod Hansen, the media liaison for the court, began questioning by introducing himself to the jurors. He asked the jurors to identify themselves in some manner, by juror number. Judge Nancy Edmunds said that media specifically wanted the jury.

Tresa Baldas, of the Detroit Free Press, had three questions: 1. What type of message the verdict sends; 2. Most compelling evidence or witness heard; 3. Did the fancy suits they wore to court bother you?

Answer: Juror No. 8 -- As relates to number 1: Message is that they deliberated and came to decision based on what they heard.

Juror No. 12 -- Regarding, number 3. What people look like or don't look like has no bearing on their decision.

Juror No. 9 -- Looked at the evidence as a whole. There wasn't one piece of evidence specifically.

Jim Kiertzner, with WXYZ: Did you decide on any counts first, particularly Count 1 RICO? What was the toughest count to agree on? Did you arrive at your decisions easily? What were some tough moments?

Mike Wilkinson, of the Detroit News: Wonders how important the text messages were?

Answer: Juror No. 7 -- The text messages were like every piece of evidence in that they played an important part.

Juror No. 3 -- Never made any decisions on a single piece of evidence.

Wilkinson: Asks a juror if they were leaned on expertise?

M.L. Elrick, of Fox News, said that anyone found guilty should be treated equally. He asked about the non-consensus verdict and about witnesses that claimed to be victims but gave gifts and profited. Also asked, on some of those counts where witnesses were shadier, there was a not guilty verdict? Did that have bearing on how they saw the charges?

Answer: Juror No. 6 -- We were instructed to look at that testimony extra carefully so we did that.

So did you give them less credibility?

Juror No. 6 -- We took the instruction seriously and looked at testimony under that light.

Pat Sweeney, with WWJ, asked about the fact that they found Kilpatrick guilty on some tax counts and not others.

Juror No. 9 -- Followed instruction. If there wasn't evidence to support, based it on that.

How difficult was it not to follow the media?

Juror No. 1 -- Personally, it wasn't a big temptation because they were in the room for such a long time. Everyone sacrificed personally and professionally. And no one was going to risk that time.

Juror No. 8 -- A social media follower so it was difficult. She says she just gave it up.

Mary Chatman, of the New York Times: Can you tell us which verdict took longest? A little more about the tenor of deliberations?

Juror No. 12 -- We are a nice group of people who respect each other to the utmost. Arguments included. To say that one thing was most difficult would be hard. All things were difficult. Went on the evidence. Spent a lot of time with each other in deliberations coming to the conclusion that they did.

Alicia Anderson: What was the initial reaction?

Juror N o. 3 -- Initially when we started deliberations we tried to get a feel and took the job very seriously right from the start. Discussed different aspects. Having been on another federal jury, very proud. Went through witnesses and testimony thoroughly. Really proud.