Community fights to save elementary school in Keego Harbor

What will happen to Bruce? Longtime homeless man source of growing controversy in Lake Orion

Heated debate, passionate voices and more people than usual at the tiny township hall just might be prominent themes of the session as the community readies for summer’s waning days.

The source of what could make for a colorful council session is a homeless man who has been as known of a figure in the community as any school, business or park, which in itself is the root of the debate.

Some don’t mind that one bit, and have embraced the man as one of their own for nearly two decades.

Others are bothered by it and uncomfortable having him be such a visible fixture in the community.

No matter what side of the debate people are on, residents in this affluent community in the northern suburbs who are paying attention to the situation are likely wondering one thing: “Will anything happen to Bruce?”

Bruce Gertz has lived in Lake Orion for nearly 20 years and has moved a lot in the process, although we’re not talking about moving from house to house.

Instead, Gertz, 65, has moved from bench to bench or from street corner to street corner. He’s lived in the area for two decades as a homeless person, now residing on a bench in front of a strip mall along M-24, a busy stretch of road near downtown Lake Orion.

Every day, many come up to him to offer money, meals from restaurants, basic everyday needs or just conversation.

Gertz said he has never married or had kids and he lived in an apartment before starting his life on the streets 19 years ago.

“I used to work at a lot of small machine shops over the years,” said Gertz, who graduated from nearby Oxford High School in 1972. “Little by little, they were outsourced to Canada or Mexico. I went from one shop to another and then simply ran out of work.”

Gertz said he has three siblings who live out of the state, but has no contact with them.

With Gertz at all times is a radio, an umbrella to shade him from both sun and rain, a bike donated to him by a local bike store, a jacket, a garbage bag and two thick Bibles.

There is a Facebook page dedicated to him called Bruce of Orion, where people can post updates on what he needs and how people can donate money to help put him up in a hotel during the frigid winter months.

Quiet but polite, Gertz is accommodating to people who want to chat with him.

Through his radio, he keeps up on current events and is sympathetic to issues plaguing others around the country and world.

“I just hope for the best for everyone, period, with the way things are going,” he said. “There’s a lot of crap going on all over the country and even environmentally with earthquakes and other stuff.”

Those who support Gertz laud his good nature and feel he hasn't bothered anybody while living on the streets.

But there is increasingly vocal opposition to Gertz and what some feel is a negative image he is portraying on the community, which makes the upcoming council meeting something on the calendar that community members are circling.

What will future hold? 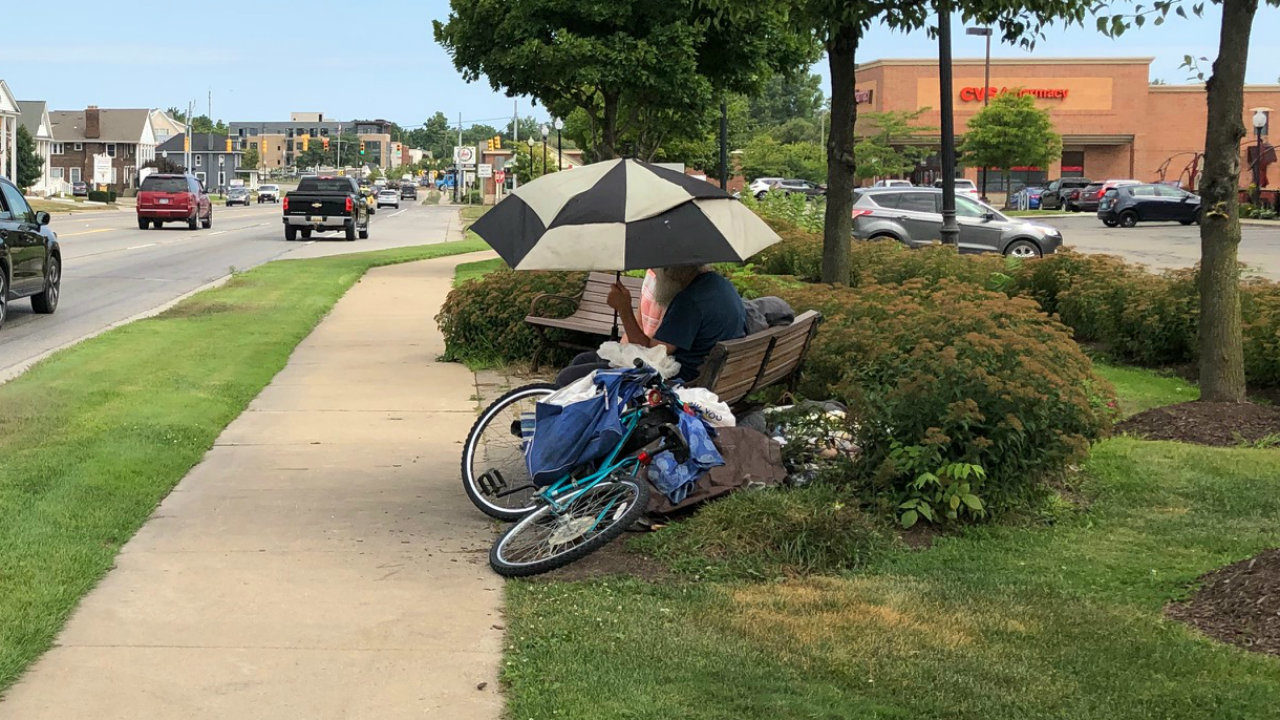 The council is slated to have a discussion on Gertz’ “camping” in the village and whether there are options to relocate him to another area during that session Aug. 26.

“So, not to be hard-hearted, but I think the village needs to take action on this before this individual either expands his zone or gets some companions,” Hammond said in the Lake Orion Review. "That’s my position on it. So, I’d like to see something move forward on that. A plan of some sorts.”

Ken Van Portfliet, the council president, said in a statement to the Lake Orion Review that "the village is actively looking for solutions."

Hammond’s comments brought both criticism and praise from people on both sides of the issue on chat forums online, including the Bruce of Orion Facebook page.

There’s a hot debate in my hometown about the homeless man, as-in there’s only one and some feel he’s ruining the image of the town. Nope, pretty sure it’s not him. Haters stay parked -I didn’t mention the town name 🤨

While not sure where he would go if forced to relocate, Gertz said he doesn't hold any ill will to community leaders who are considering moving him.

Just like the entire community, all Gertz can do is wait and see what happens.

Do you think Gertz should be allowed to stay where he is or forced to relocate? Let's chat about it in the comments.