Expect More from Local 4 News at 5. Your source for Local information & breaking news across southeast Michigan plus 4Warn Weather providing you with accurate forecasts so you can plan your day.

Drier air moving in, clouds clearing out with possible fog in Metro Detroit -- Here’s what to expect

Family of Oxford High School shooting survivor describes what happened to him, his battle to recover

Parents push for accountability after shooting

OXFORD, Mich. – Aiden Watson’s family has kept fairly quiet about his struggle to recover after being shot at Oxford High School last fall.

Now, the family is offering a rare inside glimpse of what they are dealing with and the stress they are experiencing within their community.

It has taken months for the Watson family to come forward. The top priority has been Aiden’s road to recovery after the shooting. Now, they want to share what he went through and give people an update on his life since the bullet struck his leg.

Aiden was shot in the Nov. 30, 2021, mass shooting at Oxford High School that wounded seven people and killed four students.

“Aiden was shot in the hallway and ran back into his classroom,” said Aiden’s mother Linda Watson. “His friend looked at him and said, ‘Aiden, you’ve been shot. We got to get out of here.’”

As school is about to return, the Watson family has decided to share their story in hopes of bringing change, accountability and a better understanding of the scars the students share.

'He didn't want to be left alone' 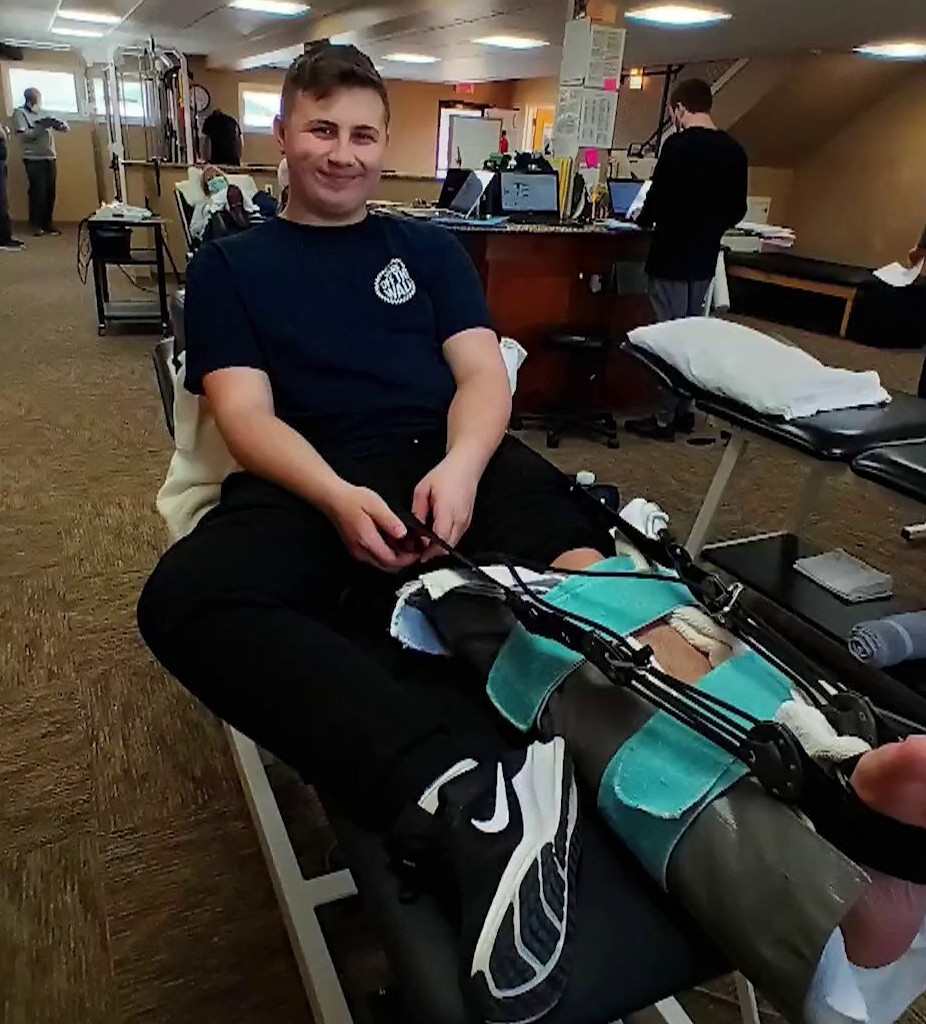 “I’m glad that we’re doing this because I have heard from people, ‘Oh, that’s not over yet? I thought he was healed?’ Or, ‘Well, he only got shot in the leg,’” his mother told Local4.

After 50 days of bleeding and countless doctor and physical therapy appointments, Aiden has made progress -- but he still has many limitations.

These days, you can find the 15-year-old on Lake Mickelson in Oxford. He likes to fish for bass and bluegill. He finds comfort in the quiet.

“It’s just peace. There’s no noise, there are no worries,” Linda said.

His siblings, Caleb and Annabelle, have become second parents for their little brother.

“He didn’t want to be left alone,” said Linda. “So they would go with him to different things -- to youth group, to when he wanted to go, maybe, see a friend.”

Aiden’s sister also sat in class with him this spring when he was willing to go to school.

“The deal was she was there. She had a car. So whether or not it felt dangerous to him,” said Aiden’s mother. “He needed that quick escape.”

While Aiden works on his mental and physical recovery, his parents are dealing with division in Oxford. Not all parents agree about what should change at Oxford High School.

“There’s a lot of fighting, a lot of differences of opinions, and we understand that I know people experience this trauma in multiple ways and everybody has a different way of healing,” Aiden’s mother said. “It feels like we are in the minority. We don’t know where we fit.”

“If you have an opinion, you say something, while they didn’t do this, right? Well, they did everything they could do,” said Aiden’s father. “That’s your perspective. Your kid’s home, your kid’s safe, right? Your kid didn’t call you and say ‘Mom, help me, I’ve been shot.’”

Linda and Jarrod Watson said they’re still frustrated with the school. They want a third-party investigation and accountability for staff members who dealt with the shooter and sent him back to class.

In the meantime, Aiden is going to try to return to school. His parents are not expecting him to make it full days. He won’t ride the bus. He is worried about passing periods and likes to avoid large crowds.

He is still in marching band, but his leg is not strong enough to stand and march that long. He can’t run like he used to because it’s very painful.

Read: ‘I was relieved that he was going to be OK’: Surveillance video shows man help injured Oxford teen after shooting

Karen Drew is the anchor of Local 4 News First at 4, weekdays at 4 p.m. and 5:30 p.m. She is also an award-winning investigative reporter.