Locals speak out about Gaylord tornado, impact on the Northern Michigan community

If you suffer from panic attacks and anxiety, Rootd can help

🔒Boomerangers: Even more young adults in Michigan living with parents

Home sweet home. But whose home is it really?

There is an increasing trend in Michigan of young adults moving back in with their parents, data shows. You’re probably already aware of the trend, but the data really spells out how much it has increased in recent years.

This article first appeared in ClickOnDetroit’s “Data Drop” newsletter -- sign up to receive it here.

1 in 3 now live with parents

In 2020, data from the Pew Research Center showed the share of 18- to 29-year-olds living with their parents became a majority since U.S. coronavirus cases began spreading earlier that year. Pew’s data shows those figures surpassed the previous peak during the Great Depression era: 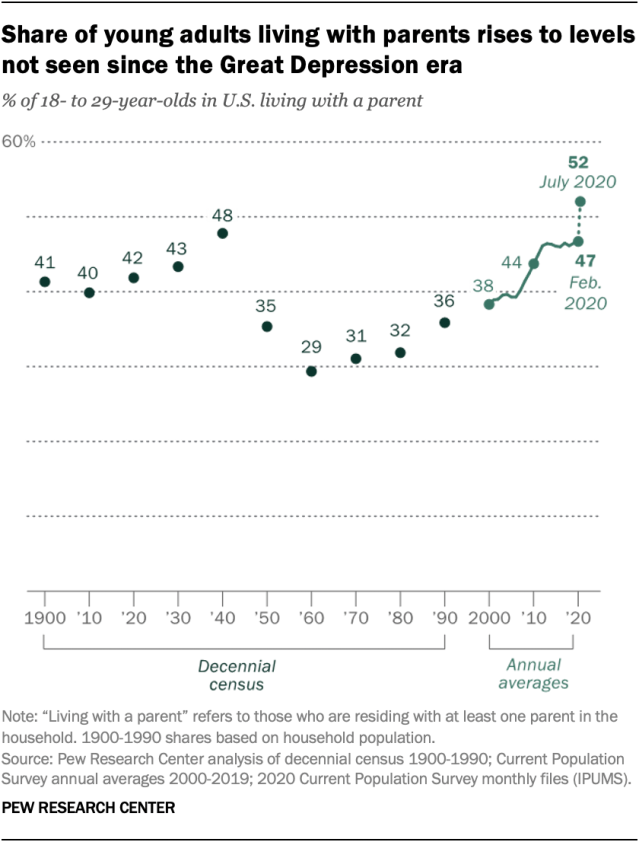 The data shows an increasing trend since the 1960s. In July 2020, 52% of young adults resided with one or both of their parents, up from 47% in February, according to the new Pew Research Center analysis of monthly Census Bureau data. The number living with parents grew to 26.6 million, an increase of 2.6 million from February.

The number and share of young adults living with their parents grew across the board for all major racial and ethnic groups, men and women, and metropolitan and rural residents, as well as in all four main census regions. Growth was sharpest for the youngest adults (ages 18 to 24). 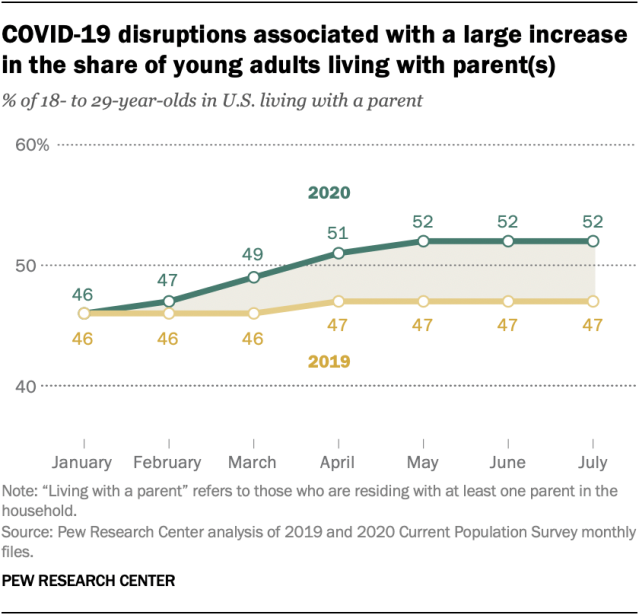 More data suggests this age group (18-24) was particularly hard-hit by the pandemic, forcing them to move when they otherwise wouldn’t have. Many relocated due to a shuttered college campus, and research out of Harvard suggests that group of college students quickly moved back out when they could, for the most part. However, that research only accounted for college students and mirrored the expected trend of college students moving back and forth between campus and their family home.

As the first chart above illustrates, this trend of young adults living with their parents has been intensely increasing since the year 2000. The pandemic exacerbated it, and now it’s unclear when or if this will level off.

Research from Zillow shows student loan debt, rising rents and stagnant wages are forcing more millennials to live at home with their parents than at any other point this century. Experts say the unaffordable housing market is keeping millennials at home rather than a failure by millennials to hold jobs or launch careers. Many have dubbed them the “boomerang” generation as a sort of slight, suggesting they are a lazy generation of jobless kids who want to mooch off of mom or dad. But the data does not support that perspective.

In fact, more millennials hold jobs than they did right after the financial crisis in the 2010s. They have been seeking and attaining financial independence from their parents, but they are lacking assets. Houses are considered unaffordable to most of these working millennials in more than 70% of America when you compare median home prices to median income across counties nationwide, according to a recent ATTOM Data Solutions report.

Meanwhile, rent prices have pushed beyond where they are projected to have been if pre-pandemic trends had held, according to the July 2021 Zillow Real Estate Market Report. The data shows rent prices in the Detroit region were up 10.5% year-over-year in July, according to the Zillow Observed Rent Index (ZORI):

Nationally, U.S. rents grew 9.2% year-over-year in July, so Metro Detroit is on the high end of the national average rent increase.

You can see why more young adults are not racing out of their multi-generational home and why they might find themselves moving back in with their parents -- and staying there for the foreseeable future. The good news for Metro Detroit is that inventory of for-sale housing was up more than 10% month-month, though it is still down 23% from last year, according to Zillow’s data:

The White House Council of Economic Advisers earlier this month posted on its blog a detailed analysis of the housing affordability problem and the administration’s plans to relieve it. Its analysis notes that housing supply has fallen short of population growth for four decades, so many of the challenges predate the disruptions caused by the COVID-19 pandemic, just as the Pew data trend also suggests.

The White House also noted home prices outpaced income growth in 2020, with the national price-to-income ratio rising to 4.4 -- the highest observed level since 2006. And housing supply has not kept up with housing prices -- not even close, showing a stark contrast to 10 years ago:

Some parents aren’t exactly thrilled about their adult children moving back home. The survey of 3,500 people first mentioned at the start of this article found 20% of such parents feel burdened by the situation, specifically if the kids are not paying rent. About 15% say they have had to delay retirement plans in order to support their adult children. Moreover, 1 in 3 parents who had previous intentions to downsize the family home, are now unable to do so. In fact, over 1 in 5 (22%) say they are considering upscaling in order to accommodate them.

So while 2 in 3 (72%) of the “boomerangers” feel they are making a prudent move by moving back home, some of their parents may not agree it’s worth it. This could create a hostile living situation in many of these homes. You’re starting to see articles like “8 important rules for adult children living with their parents” popping up. Financial contributions -- rent -- always come up. Should parents be charging rent or not? It really depends on their specific situation. What about food? Who is paying and who is eating what? And so on. Ground rules are important, the research shows.