Keep tabs on your home with this affordable smart cam

OAKLAND COUNTY, Mich. – A mandatory boil water advisory has been issued for 12 communities in Oakland County.

The Great Lakes Water Authority issued the advisory for:

Around 5:30 p.m. Monday, the GLWA experienced a power outage at their west service center that tripped the water pumps. Officials said that might have caused a momentary fluctuation in the water pressure, breaking a 48-inch water main in West Bloomfield to break.

It has caused the water supply to the vast majority of West Bloomfield to be lost, officials said.

West Bloomfield police said it could take 4-5 days for a fix. However, the GLWA said the boil water advisory could be lifted as early as Friday evening.

Boil Water Advisory! Est at least 4-5 days in order to repairs and place entire water system of #WestBloomfield into a no boil water status.

MORE: Bloomfield Hills Schools to be closed Tuesday due to boil water advisory

Bloomfield Township released a map of the affected areas. You can see it below: 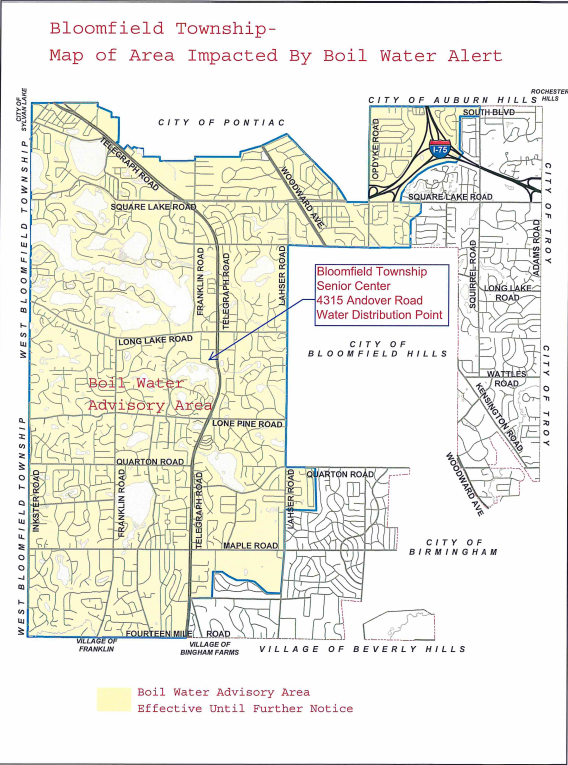 Residents must bring all water to a boil for at least one minute and then let it cool before using, officials said.

The GLWA is taking the precautionary measure because of a transmission main break that occurred around 5:45 p.m. Monday on 14 Mile Road between Farmington and Drake roads, causing a loss of water pressure in the water distribution system (pressure below 20 psi).

Whenever a water system loses pressure for a significant time, precautionary measures are recommended since a loss of pressure can lead to bacterial contamination in the water system, officials said.

Bacteria are generally not harmful and are common throughout our environment. Boiling water before using it will kill bacteria and other organisms that may be in the water.

The GLWA is currently investigating the cause of the break.

The boil water advisory will remain in effect until results from sampling verify the water is safe to drink.

1. Why has a precautionary boil water advisory been issued for my neighborhood?

During some water system repairs or replacements, the water system serving your premises may be temporarily depressurized. Whenever a water system loses pressure, there is the potential for contaminants to enter the system.

2. When is it safe to cook, wash, drink and clean with the water?

After the boil water advisory has been lifted. You can wash and clean with the water under a boil water notice (see #3 below) without boiling it first.

3. Is it safe to shower under a boil water advisory?

Yes, unless you have an open wound, etc. that could let bacteria into your body.

4. Is it safe to brush your teeth under a boil water advisory?

You should use boiled water.

5. Is it safe to wash the dishes in a dishwasher or by hand under a boil water advisory?

Use heat dry in the dishwasher - pour hot boiled water over hand washed.

6. How long should you boil the water?

The water should reach a rolling boil and boil for 5 minutes.

7. Do you have to let it stand after you boil the water, why?

You should let it stand for about 15 minutes to minimize the chance of burning yourself.

8. Why is the water milky or discolored? What should you do to get rid of the discoloring? Is it safe to use this water?

If the water is a milky/cloudy color and clears in a few minutes when put it in a glass (from the bottom up), then it is air in the water. Air in the water is an aesthetic issue and not a drinking water health concern. You can help by flushing your lines, starting with the outside hose bibb closest to where the service line enters your home. Flush outside about 15 minutes, then flush your inside faucets, etc. for a few minutes each.

9. Community Wells (water milky or discolored) – what should you do to get rid of the discoloring?

Is it safe to use this water (cook, wash, drink, etc.)? For cloudy/milky color, see #8. If the water is yellow, orange, red or brown, it may be due to iron in the well water. Iron is not a health concern in well water but the discoloration is a nuisance problem. If you have a softener or filter, by bass it and then check the color. If it is clear, then you should follow equipment maintenance requirements (check your salt level and regenerate your softener, clean or replace filter, etc.). If the bypassed water is discolored, it may be due to increased velocity in the water mains (lots of water sprinkling, running a lot of water in the home by clothes washing/dish washing, showering at the same time or system fire hydrant use). Check and flush your outside hose bibb, closest to where the service line enters your home, to try and clear water color. If a hydrant was used it may take a day to settle down. You can contact the Billing Services Department to schedule a low-pressure service line flush at 248-858-1110 if the discoloring persists.

10. When trying to flush your water lines, does it matter if you are running the inside taps or the outside? Should you drain your hot water heater?

See #8 for flushing. You do not need to drain your hot water heater for a "precautionary boil water advisory" as you shouldn't drink or cook with water drawn from your hot water tap.

11. What can be done when there is air in the water lines?

12. Are there any precautions to take when you have low water pressure?

No, but you may want to put water some away in case you lose all water pressure.

13. Does the use of bleach purify your water? How much bleach? (Under a boil water notice, can you use bleach to disinfect your water without boiling it first)?

Yes, when boiling is not practical, chemical disinfection should be used. You can use bleach to disinfect drinking water. See below for Environmental Protection Agency (EPA) recommendations.
Chlorine Bleach: Common household bleach contains a chlorine compound that will disinfect water. The procedure to be followed is usually written on the label. When the necessary procedure is not given, find the percentage of available chlorine on the label and use the information in the following tabulation as a guide.

(If strength is unknown, add ten drops per quart of water. Double amount of chlorine for cloudy or colored water). The treated water should be mixed thoroughly and allowed to stand for 30 minutes. The water should have a slight chlorine odor; if not, repeat the dosage and allow the water to stand for an additional 15 minutes. If the treated water has too strong a chlorine taste, it can be made more pleasing by allowing  the water to stand exposed to the air for a few hours or by pouring it from one clean container to another several times.