Should parallel parking not be part of the Michigan driving test?

5 players the Tigers could target in Justin Verlander trade

Could Tigers get top prospects in return for Justin Verlander?

DETROIT – With the holiday season behind them and the All-Star Game approaching, the Detroit Tigers are in an unfamiliar position this summer.

The Tigers are more than halfway through the 2017 season, and at 37-46, they're tied for the fewest wins in the American League. Only the Chicago White Sox and Oakland Athletics have worse records than the Tigers, only because they've played fewer games.

So instead of adding pieces to put them over the hump, general manager Al Avila will be tasked with selling off assets to other teams and setting the Tigers up for the future. Players like J.D. Martinez, Justin Wilson, Alex Avila and Ian Kinsler are expected to come up in trade talks and could bring back some pieces that will help the team's next playoff push.

But the biggest name to be tossed around this month belongs to a player who has been the face of the franchise since 2006.

Justin Verlander is coming off one of his best major-league seasons, as he should have taken home another AL Cy Young award. Even though he's struggling through 17 starts this year, he's widely considered one of the best starting pitchers in the league and could provide a boost to a playoff team in the second half.

For the Tigers, it doesn't make sense to hold onto Verlander as he enters his mid-30s. They don't figure to be in contention for the next couple seasons, so it would benefit both parties if Verlander is dealt to a contender.

What can the Tigers expect to get in return? As it so often does in professional sports, money will be a major determining factor. Verlander is making $28 million this season, and will make the same amount in 2018 and 2019. There's also a $22 million vesting option for 2020 if he finishes in the top five in 2019 Cy Young voting.

If the Tigers are willing to pay some of Verlander's salary, that will obviously sweeten the return they can get in prospects and players. If they aren't willing to pay, their only benefit to trading Verlander might be salary cap relief.

As the Tigers prepare to rebuild for another run at the World Series, they need to build a strong core of young players as the Cubs, Yankees and Astros have done. Verlander is an excellent bargaining chip to acquire one of those pieces.

Here are five players the Tigers could potentially target in a Verlander deal. 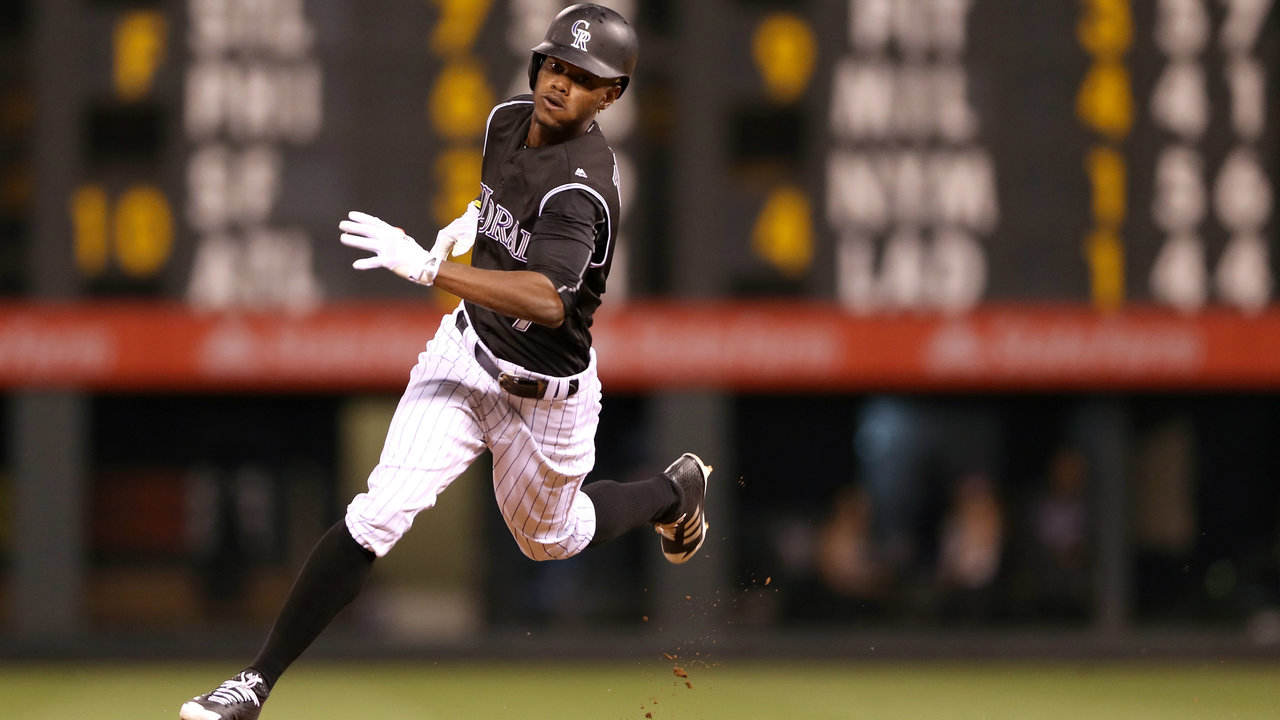 The Colorado Rockies should be in the market for a starting pitcher this month, as they've put together a solid rotation of young players, but could benefit from a reliable veteran presence.

Jon Gray and Jeff Hoffman were elite prospects who have turned into strong starters for the Rockies, but young mid-level guys like Kyle Freeland, German Marquez and Antonio Senzatela aren't entirely reliable, especially in the heat of a pennant race.

Verlander could be even more valuable to a Rockies rotation that lacks strikeouts. For a team that plays its home games in the most hitter-friendly park in the league, Coors Field, the Rockies' rotation doesn't miss enough bats. Colorado's starters have combined for 7.22 strikeouts per nine innings this season, which is flirting with danger in the home-run mecca.

Why would the Rockies part with Tapia? It's possible that they wouldn't, but they have an embarrassment of riches in the outfield. Charlie Blackmon is one of the best players in baseball, Ian Desmond was a huge offseason signing and Carlos Gonzalez has been an MVP-caliber player in the past. The Rockies have also gotten solid performances from Gerardo Parra and budding star David Dahl is making progress in his return from a spring-training injury.

Tapia is 23 years old and would fill a need that the Tigers have been lacking for a decade: athleticism. Though he isn't expected to hit for much home-run power in the majors, he is an elite contact hitter who racked up 15 doubles and four triples in 34 games at Triple-A this season. He struck out only 26 times and stole 11 bases.

Since being called midway through the first half, Tapia has struck out only 18 times in 86 at-bats while reaching base at a .348 clip. He's sporting an .813 OPS over 33 games.

Even if Justin Upton opts into the final four years of his contract with the Tigers this offseason, there's a need at the other two outfield positions. Tapia would give them a left-handed bat who can step into an MLB role right away and be a major piece in the future. 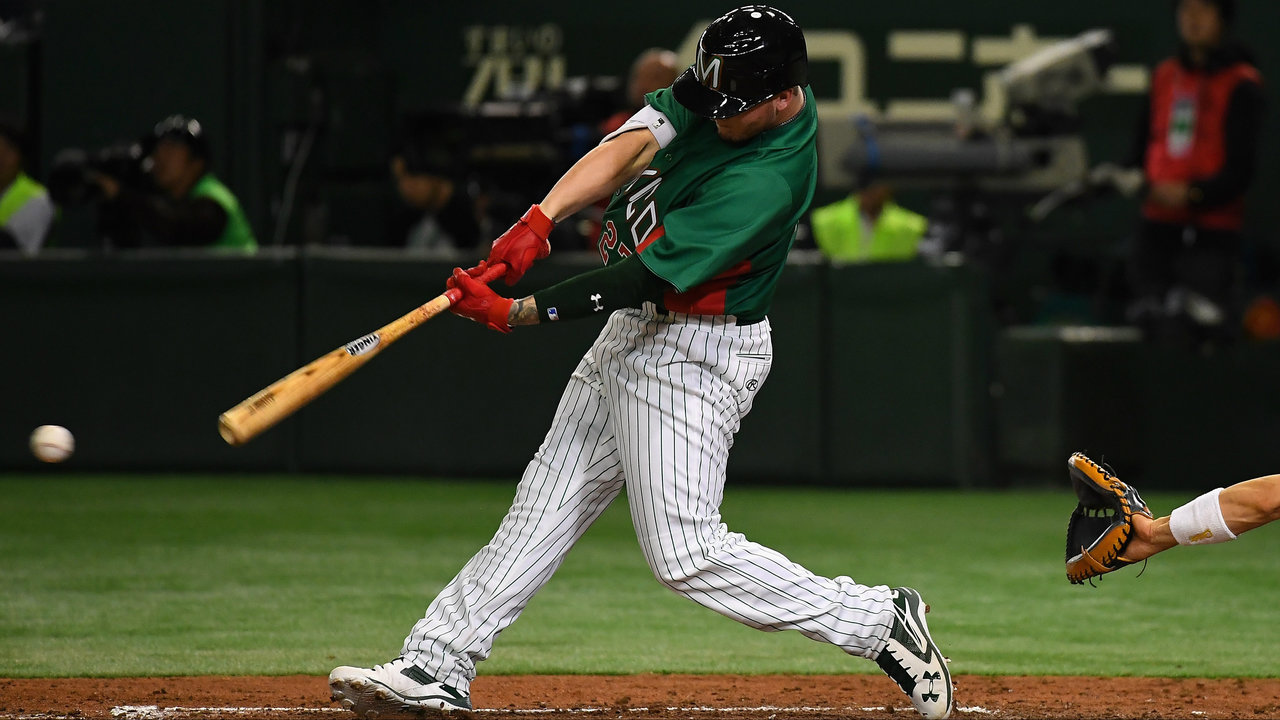 The Dodgers feel like a bit of a stretch to make a huge move for an expensive starting pitcher, especially since they have a crowded starting rotation as it is. But ownership in Los Angeles has shown over the last several years that it can never be discounted when a star player becomes available.

Los Angeles has a loaded farm system, even with top prospects such as Corey Seager, Julio Urias and Cody Bellinger graduating to the majors over the last few seasons. One of the players the Tigers could target is outfielder Alex Verdugo.

The No. 2 prospect in their system and the No. 50 overall prospect in the league, Verdugo has been tearing up Triple-A. The 21-year-old lefty is batting .347 with a .417 OBP and .467 slugging percentage through 77 games. Even more impressively, he's got more walks (35) than strikeouts (31) this season.

Verdugo's elite on-base skills have earned him a spot atop the Oklahoma City Dodgers' lineup, and he's an intriguing prospect to leadoff in the big leagues. Verdugo doesn't have elite speed, but he puts the ball in play and would be a rare commodity atop the Tigers lineup in an era of hitters selling out for home runs or strikeouts.

Though the Dodgers have a logjam behind Clayton Kershaw and Alex Wood in their rotation, starters Kenta Maeda, Brandon McCarthy, Hyun-jin Ryu and Rich Hill have all proved unreliable in their performance or their ability to stay healthy. Verlander is about as reliable as it gets for a starting pitcher, making at least 30 starts in 10 of the last 11 seasons with Hall of Fame-level results. 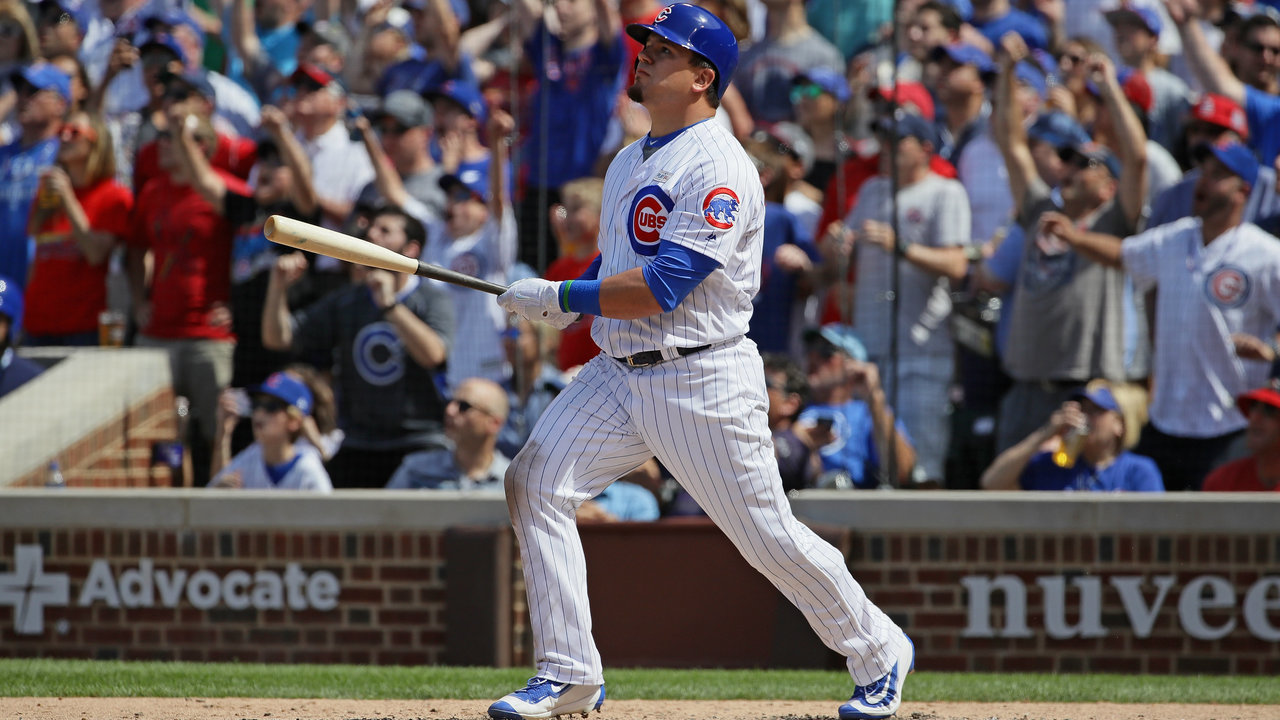 This is probably the most popular name on the list, but he also comes with the widest range of possible outcomes.

Kyle Schwarber burst onto the scene as a rookie in 2015, mashing 16 home runs in 69 games despite major strikeout issues. In 2016, an outfield collision in just his second game erased his entire sophomore campaign, but when he returned in the World Series, he went 7-17 and reached base in half his plate appearances.

This season, the league caught up to Schwarber. The young star struck out 75 times in his first 222 at-bats and posted a dismal .673 OPS. He's still walking at a solid rate, but his lack of contact dragged his batting average down to .171.

At 24 years old, it's likely that Schwarber's best days are still ahead of him, but he might not be a good fit for the Cubs. Though he came up as a catcher, Schwarber was moved to the outfield to make room for Willson Contreras, who is much stronger defensively. Since the move to left field, Schwarber has been a liability on defense. A move to the American League would suit the young slugger, as he could be designated hitter or split time at first base.

The Tigers will have an opening at DH after 2018, when Victor Martinez's contract comes off the books. They could also use Schwarber at first base to relieve Miguel Cabrera as he gets older. His left-handed bat would fit perfectly in the middle of the Tigers order if he can continue to draw walks and increases his contact rate.

Verlander would fill a major need for the Cubs, as their starting pitchers have struggled deep into the season. Players who were more than reliable for the team in the past, such as Jake Arrieta and John Lackey, have been very inconsistent in 2017, and even last year's heroes Jon Lester and Kyle Hendricks have taken significant steps back.

As a whole, the Cubs' starting pitchers own a 4.52 ERA and 1.33 WHIP. Verlander could become the best pitcher in the rotation if he gets on a roll. 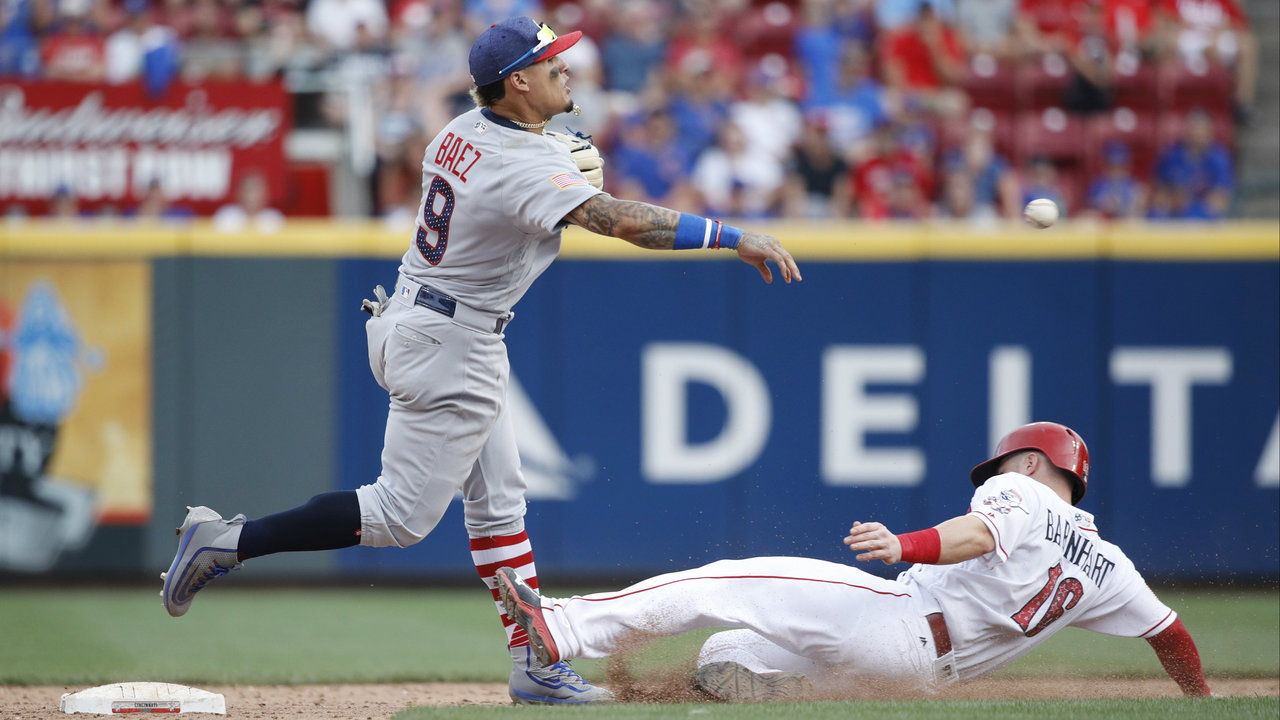 If the Tigers want to go in the opposite direction of Schwarber, they could target a more defensive-minded player like Javier Baez.

Baez has played five different positions for the Cubs this season, including all four infield spots. He's most comfortable at second base, but with slugging prospect Ian Happ coming up with 12 home runs in 47 games, Baez doesn't have the position nailed down.

At 24 years old, Baez is another player who would greatly improve the Tigers' athleticism. In fact, Baez might be one of the most athletic players in the league. His range and playmaking ability on defense are among the best in baseball, and he's a flat-out exciting player.

On offense, the right-hander has started to work out some of his issues, sporting a solid .462 slugging percentage. He needs to improve his plate discipline, as he's only walked 13 times in 74 games. He walked 15 times in 142 games last season. Even though his strikeouts aren't a major issue, he needs to reach base at a better rate than .300.

If the Tigers move Kinsler, Baez could settle into an everyday role at second base, but if not, he can play a variety of other positions at a high level. The Tigers will have needs all over the diamond, so Baez would give them flexibility.

Again, the Cubs have a major need for Verlander. Depending on how much salary the Tigers are willing to eat, they could get into a discussion for a young player with as much promise as Baez. 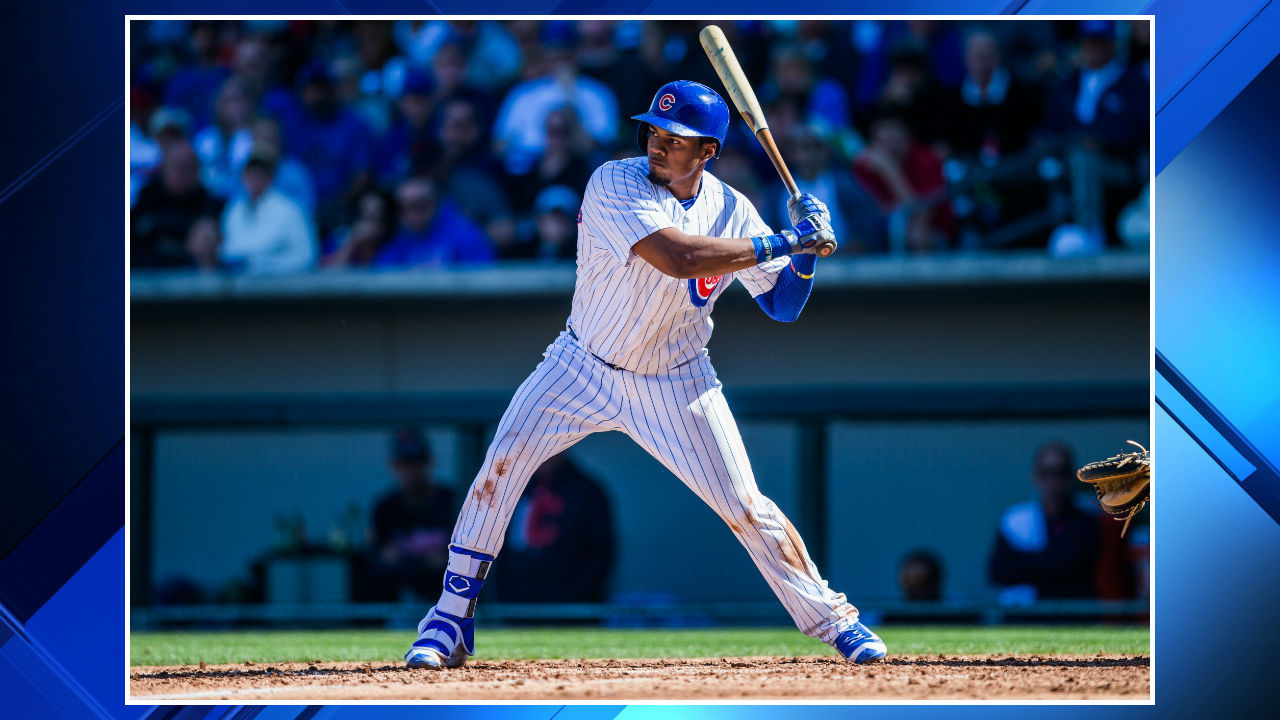 Since the Cubs appear to be the best match for a Verlander trade -- and have reportedly been the most interested -- we'll round out the list with a third youngster from Chicago's north side.

Jeimer Candelario has been buried by the deep, talented prospect pool built by Theo Epstein, but that wouldn't make him any less valuable to a team like the Tigers. Candelario is a corner infielder who's path to the major leagues is completely blocked by Kris Bryant at third base and Anthony Rizzo at first base. Bryant and Rizzo are the two faces of the Cubs franchise, so Candelario's full potential is unlikely to be reached in Chicago.

In a small 11-game sample this season, Candelario is 5-33 with one home run and two doubles in the majors. He's struck out 12 times and only drawn one walk, so it's been a struggle for the switch-hitting 23-year-old.

But in 65 games with the Iowa Cubs this season, Candelario showed an excellent ability to draw walks and hit for power. In 65 games, he racked up 22 doubles, nine home runs and 31 walks. His .360 OBP and .511 slugging earned him a chance to play with Bryant suffered a minor ankle injury.

He hasn't performed well in his short tryout, but that doesn't erase his excellent minor-league track record. Candelario is the No. 3 prospect in the Cubs' system, the No. 5 prospect at third base and the No. 82 overall prospect in baseball.

While the Tigers have Nicholas Castellanos at third base, Candelario would give them options at the corner infield positions. Castellanos has been awful defensively since entering the majors, and Cabrera will eventually find himself in the DH slot more often. If Verlander demands a prospect like Candelario, the Tigers will find a way to get him into the lineup.

Al Avila has about three weeks to capitalize on the Tigers' tradable commodities, but it's unclear if Verlander will be one of them. If the lifetime Detroit Tiger is moved, Avila would do well to get one of these five players in return.