DETROIT – It has been quite a week for science, so let’s get started. 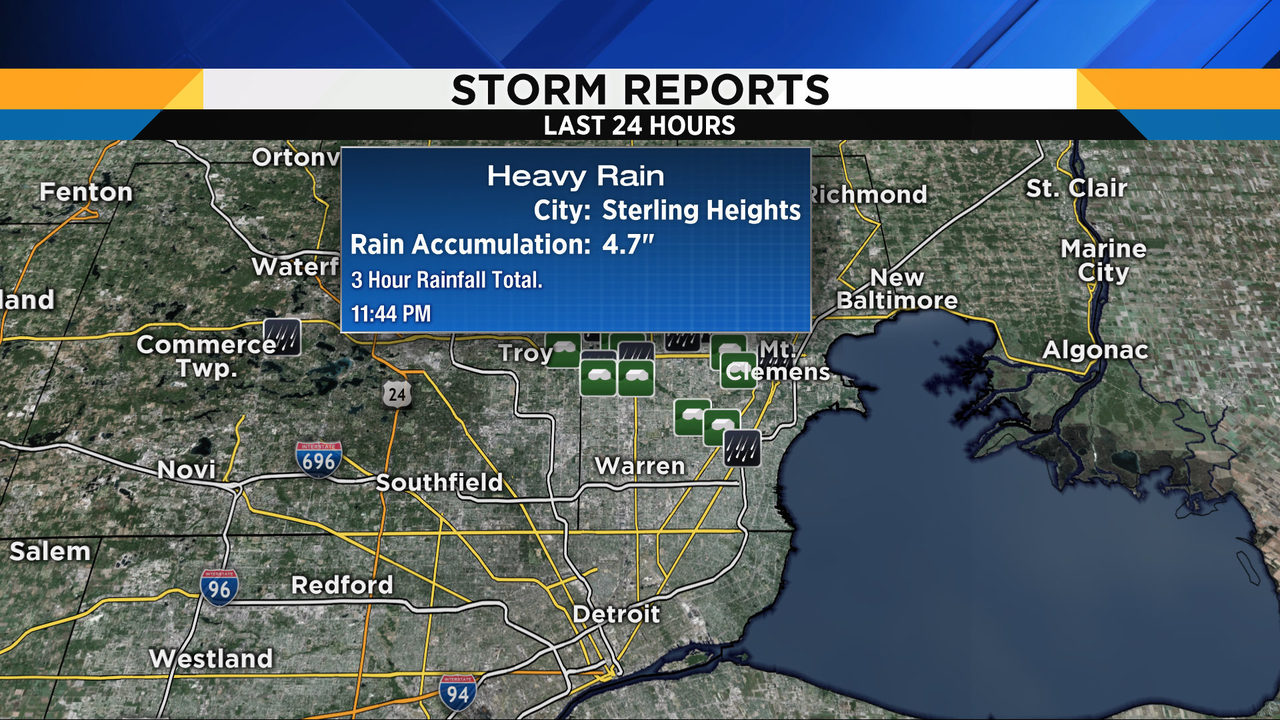 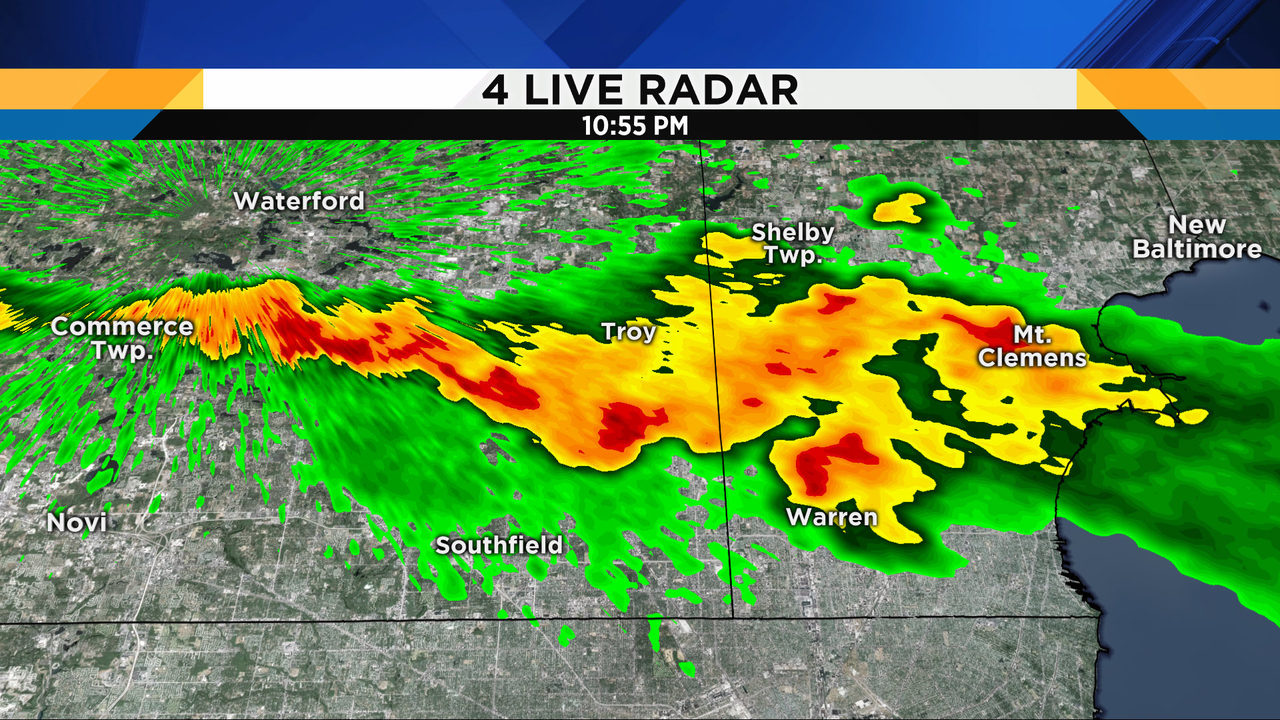 Most of us needed rain.  Badly.  And most of us didn’t get any Monday night.  But, a small stripe of intense rain that developed along parts of the M-59 corridor dropped historic amounts of rain and caused widespread severe flooding.  If you missed my Facebook Live that put this extraordinary event into context and explained what impact global warming did and did not have on it, you can view it here.

Here is the a video produced by NASA showing the entire asteroid and the location of the landing sites. You can watch the video here.

Since its arrival in December 2018, the OSIRIS-REx spacecraft has mapped the entire asteroid in order to identify the safest and most accessible spots for the spacecraft to collect a sample. These four sites now will be studied in further detail in order to select the final two sites – a primary and backup – in December.

The team originally had planned to choose the final two sites by this point in the mission. Initial analysis of Earth-based observations suggested the asteroid’s surface likely contains large “ponds” of fine-grain material. The spacecraft’s earliest images, however, revealed Bennu has an especially rocky terrain. Since then, the asteroid’s boulder-filled topography has created a challenge for the team to identify safe areas containing material that can be sampled, which must be less than 1 inch in diameter, to be fine enough for the spacecraft’s sampling mechanism to ingest it.

“We knew that Bennu would surprise us, so we came prepared for whatever we might find,” said Dante Lauretta, OSIRIS-REx principal investigator at the University of Arizona, Tucson. “As with any mission of exploration, dealing with the unknown requires flexibility, resources and ingenuity. The OSIRIS-REx team has demonstrated these essential traits for overcoming the unexpected throughout the Bennu encounter.”

The original mission schedule intentionally included more than 300 days of extra time during asteroid operations to address such unexpected challenges. In a demonstration of its flexibility and ingenuity in response to Bennu’s surprises, the mission team is adapting its site selection process.

Instead of narrowing the choice down to the final two sites this summer, the mission will spend an additional four months studying the four candidate sites in detail, with a particular focus on making high-resolution observations of each site to identify regions of fine-grain material that can be sampled.

The boulder maps that citizen science counters helped create through observations earlier this year were used as one of many pieces of data considered when assessing each site’s safety. The data collected will be key to selecting the final two sites best suited for sample collection.

In order to further adapt to Bennu’s ruggedness, the OSIRIS-REx team has made other adjustments to its sample site identification process. The original mission plan envisioned a sample site with a radius of 82 feet. Boulder-free sites of that size don’t exist on Bennu, so the team has instead identified sites ranging from 16 to 33 feet in radius. In order for the spacecraft to accurately target a smaller site, the team reassessed the spacecraft’s operational capabilities to maximize its performance.

The mission also has tightened its navigation requirements to guide the spacecraft to the asteroid’s surface and developed a new sampling technique called “Bullseye TAG,” which uses images of the asteroid surface to navigate the spacecraft all the way to the actual surface with high accuracy. The mission’s performance so far has demonstrated the new standards are within its capabilities.

"Although OSIRIS-REx was designed to collect a sample from an asteroid with a beachlike area, the extraordinary in-flight performance to date demonstrates that we will be able to meet the challenge that the rugged surface of Bennu presents," said Rich Burns, OSIRIS-REx project manager at NASA’s Goddard Space Flight Center in Greenbelt, Maryland. "That extraordinary performance encompasses not only the spacecraft and instruments, but also the team who continues to meet every challenge that Bennu throws at us."

The four candidate sample sites on Bennu are designated Nightingale, Kingfisher, Osprey, and Sandpiper – all birds native to Egypt. The naming theme complements the mission’s two other naming conventions – Egyptian deities (the asteroid and spacecraft) and mythological birds (surface features on Bennu).

The four sites are diverse in both geographic location and geological features. While the amount of material that can be sampled in each site has yet to be determined, all four sites have been evaluated thoroughly to ensure the spacecraft’s safety as it descends to, touches and collects a sample from the asteroid’s surface.

Nightingale is the northernmost site, situated at 56 degrees north latitude on Bennu. There are multiple possible sampling regions in this site, which is set in a small crater encompassed by a larger crater 459 feet in diameter. The site contains mostly fine-grain, dark material and has the lowest albedo, or reflection, and surface temperature of the four sites.

Kingfisher is located in a small crater near Bennu’s equator at 11 degrees north latitude. The crater has a diameter of 26 feet and is surrounded by boulders, although the site itself is free of large rocks.

Among the four sites, Kingfisher has the strongest spectral signature for hydrated minerals.
Osprey is set in a small crater, 66 feet in diameter, which is also located in Bennu’s equatorial region at 11 degrees north latitude. There are several possible sampling regions within the site. The diversity of rock types in the surrounding area suggests that the regolith within Osprey may also be diverse.

Osprey has the strongest spectral signature of carbon-rich material among the four sites.
Sandpiper is located in Bennu’s southern hemisphere, at 47 degrees south latitude. The site is in a relatively flat area on the wall of a large crater that is 207 foot in diameter. Hydrated minerals are also present, which indicates that Sandpiper may contain unmodified water-rich material.

This fall, OSIRIS-REx will begin to make detailed analyses of the four candidate sites during the mission’s reconnaissance phase. During the first stage of this phase, the spacecraft will execute high passes over each of the four sites from a distance of 0.8 miles to confirm they are safe and contain material that can be sampled. Close-up imaging also will map the features and landmarks required for the spacecraft’s autonomous navigation to the asteroid’s surface. The team will use the data from these passes to select the final primary and backup sample collection sites in December.

The second and third stages of reconnaissance will begin in early 2020 when the spacecraft will perform passes over the final two sites at lower altitudes and take even higher resolution observations of the surface to identify features, such as groupings of rocks that will be used to navigate to the surface for sample collection. OSIRIS-REx sample collection is scheduled for the latter half of 2020, and the spacecraft will return the asteroid samples to Earth on Sept. 24, 2023.

This new image from the Hubble Space Telescope reveals the intricate, detailed beauty of Jupiter’s clouds.  Taken on June 27, 2019, it features the planet’s trademark Great Red Spot and a more intense color palette in the clouds swirling in the planet’s turbulent atmosphere than seen in previous years.
Among the most striking features in the image are the rich colors of the clouds moving toward the Great Red Spot. This huge anticyclonic storm is roughly the diameter of Earth and is rolling counterclockwise between two bands of clouds that are moving in opposite directions toward it.

As with previous images of Jupiter taken by Hubble and other observations from telescopes on the ground, the new image confirms that the huge storm that has raged on Jupiter’s surface for at least 150 years continues to shrink. The reason for this is still unknown so Hubble will continue to observe Jupiter in the hope that scientists will be able to solve this stormy riddle. Much smaller storms appear on Jupiter as white or brown ovals that can last as little as a few hours or stretch on for centuries.

The Hubble image also highlights Jupiter’s distinct parallel cloud bands. These bands consist of air flowing in opposite directions at various latitudes. They are created by differences in the thickness and height of the ammonia ice clouds; the lighter bands rise higher and have thicker clouds than the darker bands. The different concentrations are kept separate by fast winds which can reach speeds of up to 435 mph.

These observations of Jupiter form part of the Outer Planet Atmospheres Legacy program, which began in 2014. This initiative allows Hubble to dedicate time each year to observing the outer planets and provides scientists with access to a collection of maps, which helps them to understand not only the atmospheres of the giant planets in the solar system, but also the atmosphere of our own planet and of the planets in other planetary systems.