DETROIT – There's been plenty of buzz surrounding the elite pitching prospects in the Detroit Tigers' organization, but the top position players are flying under the radar.

The organization as a whole has made pitching more of a priority. Each of the last four first-round picks have been right-handed starting pitchers while trade deadline deals have been geared more toward taking chances on everyday players.

If the Tigers hope to compete in a few years, though, some of these hitters will need to emerge as legitimate threats at the plate. Right now, there's very little offensive promise on the major league roster.

The Tigers have 19 prospects given at least a 45 overall grade by MLB Pipeline, and 10 of those are position players. Here's a ranking of how those 10 players are hitting so far in 2019.

How he got here: Leonys Martin trade in July 2018 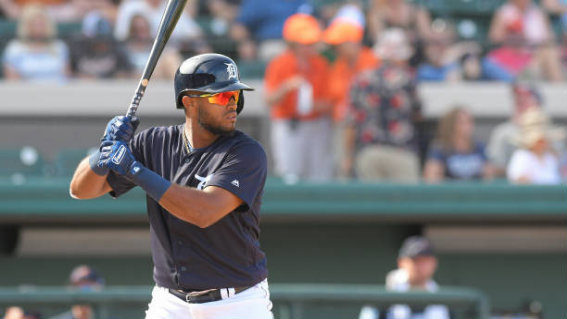 The Castro trade is starting to look like Al Avila's best move as general manager, as the 22-year-old shortstop is raking at Triple-A Toledo.

In 43 games, Castro has racked up 59 hits, 18 extra-base hits and three home runs. He's been successful on eight of 10 stolen base attempts and owns a lofty .952 OPS.

There are certainly reasons to be skeptical about Castro as a .349 hitter. He owns a .273/.319/.393 slash line in more than 500 career minor league games. But the Tigers really liked Castro before sending Leonys Martin to Cleveland to acquire him, so it's not a coincidence he's having his best season.

He hit .324 with 15 extra-base hits and a .928 OPS in 26 games at Double-A Erie last season after the trade, earning a chance to start in Toledo this year.

Castro is considered a good defender with a strong arm and good speed. The question was always whether he would hit enough to be a difference-maker in the big leagues. Right now, he looks like the best offensive threat in the Tigers' organization.

How he got here: Justin Verlander trade in August 2017 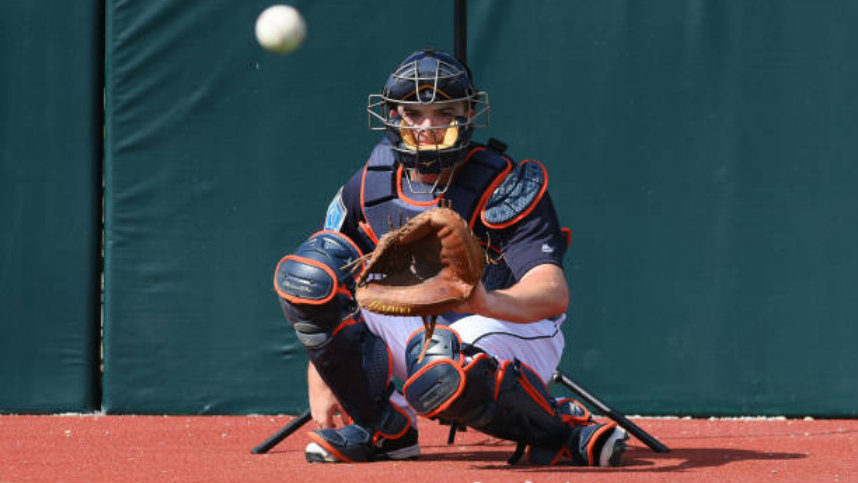 With top 100 prospect Franklin Perez on and off the injured list, Rogers has helped ease the pain of what could otherwise look like a disastrous Justin Verlander trade.

Rogers fell from the list of the top 10 catching prospects when he struggled at the plate last season, but he's come roaring back in 2019. He earned a promotion to Toledo after posting a .963 OPS with five homers and 19 walks in 27 games at Double-A Erie.

Since the call-up, all he's done is hit. Rogers owns a .415 OBP with three doubles and three homers in 10 games. His 1.062 OPS is the best among the organization's top prospects.

Rogers is one of the top two defensive catchers in the minor leagues. He received a 70 grade for his fielding and a 65 grade for his arm talent. Only Oakland Athletics prospect Sean Murphy can match those numbers with a 65 fielding grade and a 70 arm grade.

Defense is obviously the most important part of a catcher's job, but Rogers looks like he can also be a threat at the dish.

How he got here: Third-round draft pick in 2018 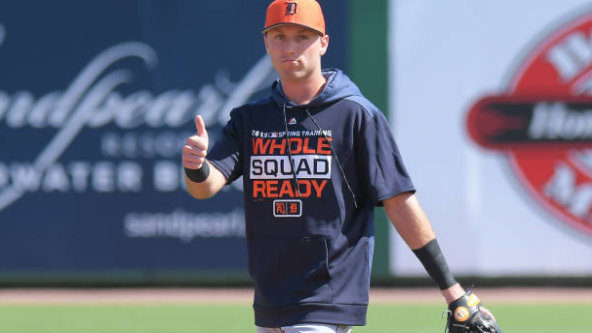 The first full season of professional baseball got off to a rough start for Clemens, who batted just .157 with one home run and 30 strikeouts in his first 23 games. He wasn't making much quality contact and the whiff rate was too high.

Clemens turned his season around May 5 with two home runs and two doubles in a game against the Bradenton Marauders. In the 23 games since, Clemens is hitting .310 with a .999 OPS, four home runs and 12 walks to 18 strikeouts.

The extra-base power Clemens flashed in 2018 has returned. He had 12 doubles, two triples and five home runs in 52 games last season, and now he has 13 extra-base hits in his last 23 games at Single-A Lakeland.

The Tigers have several middle infield prospects, but none have a higher offensive ceiling than Clemens. Even though he was drafted just last year, Clemens is already 23 years old, so the Tigers should be relieved to see his bat coming around.

How he got here: Justin Verlander trade in August 2017 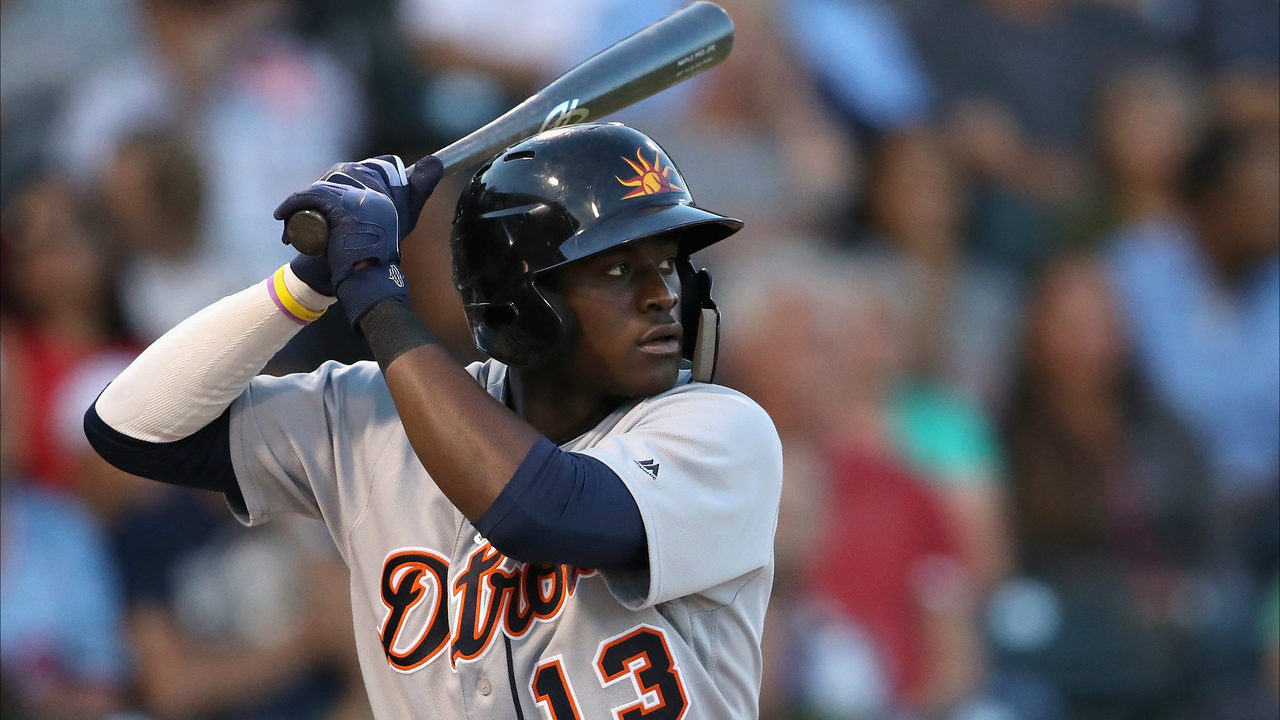 Another prized prospect acquired in the Verlander trade, Cameron is starting to come around for the Toledo Mud Hens.

Cameron was considered a top 100 prospect before 2016 but had a couple of rough offensive seasons in 2015 and 2016, dropping him from the list. He rose to Detroit's No. 5 prospect this season, though, and is earning that distinction so far.

Overall, Cameron has shown promise this season, but it comes with concerns. He owns a solid .788 OPS and .337 OBP, but 50 strikeouts is far too many in 42 games for a player with modest power.

In the last 20 games, though, Cameron has been on fire. He's slugging .590 over that span thanks to five doubles, two triples and four homers. Strikeouts are still an issue, but he has 25 hits and five walks in 20 games, so the OBP sits at an elite .384.

Cameron's best skill is his speed, but that hasn't manifested into stolen bases this season. He has been thrown out five times in eight attempts after going 24 for 35 across three levels last year. 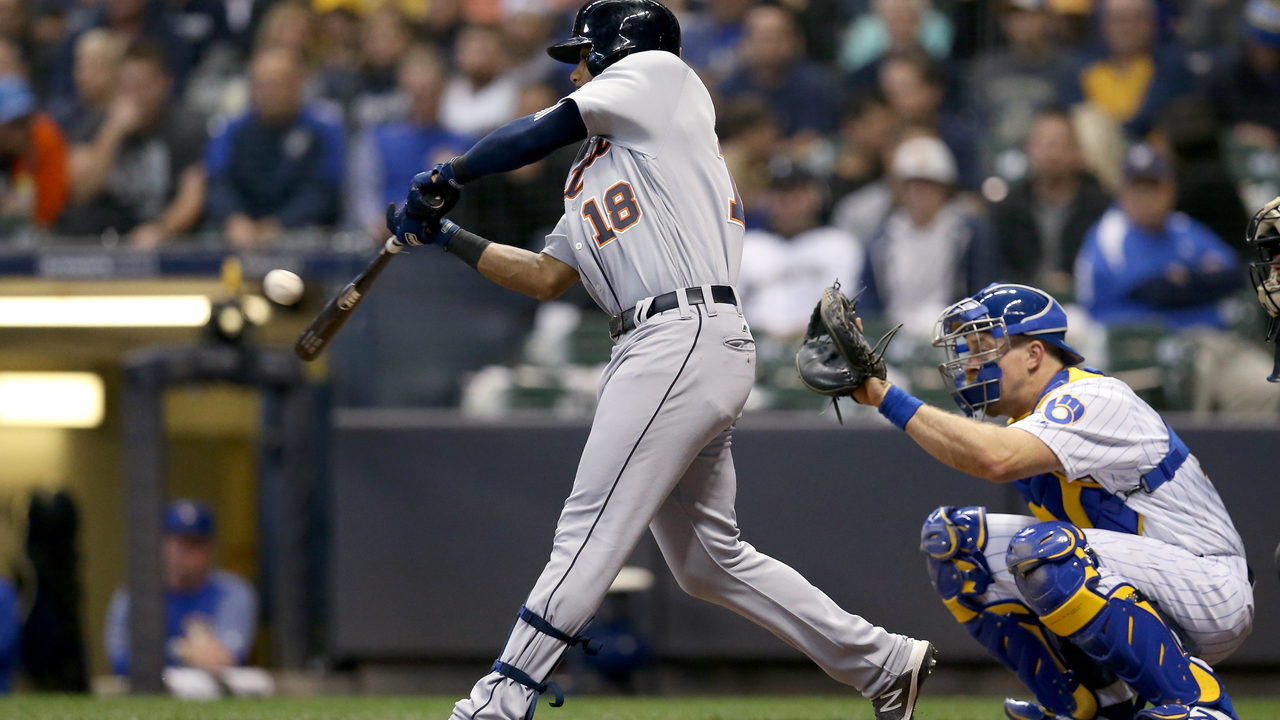 It's been a tough second stint in the major leagues for Lugo so far, but he was showing positive signs in Toledo before the promotion.

Lugo is the lowest-ranked prospect on this list -- No. 17 in the Tigers organization -- but he was batting .341 with an .861 OPS. He draw 11 walks compared to 24 strikeouts over 32 games, which was a welcome sight, as many other prospects in the organization have been whiffing too often.

Lugo has mostly been a singles hitter, but there have been flashes of power throughout his minor league career. Though his numbers at the MLB level are bad this season, he's one multi-hit game away from completely turning them around.

How he got here: Justin Wilson/Alex Avila trade in July 2017 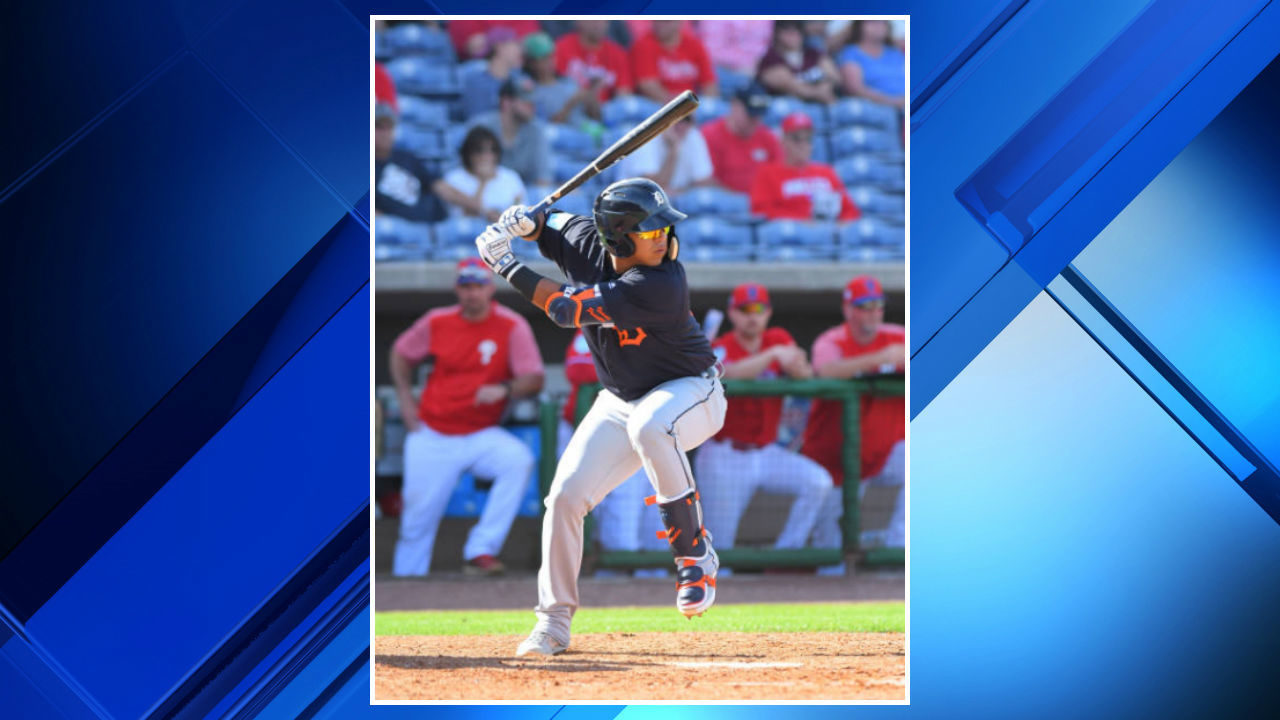 The top position player in the Tigers' organization got a big rankings boost this offseason after hitting 15 home runs, posting an .815 OPS and walking 51 times compared to 76 strikeouts in 2018.

Now a top 100 prospect in baseball and the No. 4 prospect for the Tigers, 2019 has been a bit disappointing for Paredes, who only has one home run and, as a result, a .706 OPS in Double-A Erie.

The plate discipline suggests Paredes will turn his season around, though. He has 20 walks and 21 strikeouts in 43 games, so his OBP is a healthy .356. The extra-base power is what's holding back his numbers. Only 10 of his 44 hits have gone for extra bases, and eight of those are doubles.

Paredes had 15 home runs, 28 doubles and two triples last season, so there's decent power in his profile. If he can regain that form, the overall numbers will look much more impressive.

How he got here: Eighth-round draft pick in 2016 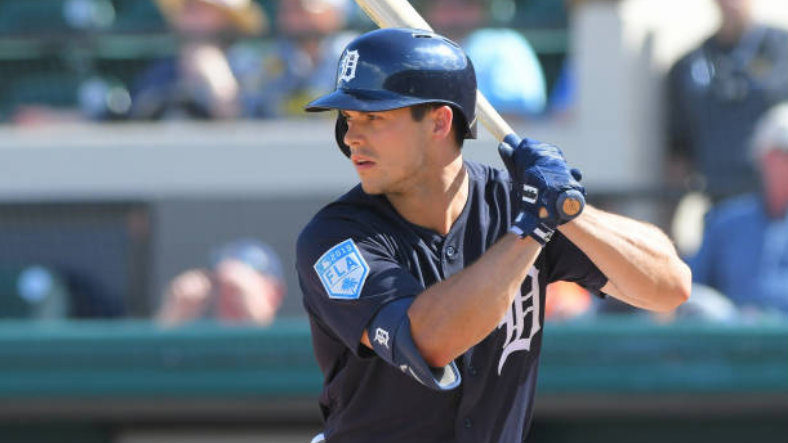 This is where the offensive numbers take a major dip. Robson rose to Detroit's No. 16 overall prospect this offseason after posting an .816 OPS with 11 home runs, 29 doubles, 18 stolen cases and a .376 OBP last year.

Triple-A has proved to be much more difficult this year. Robson is batting .198 with two home runs and five doubles in 37 games. Strikeouts have always been an issue, and he's whiffing more than once per game again this season.

Robson is still walking at a good rate. His 19 free passes have his OBP more than 100 points higher than his batting average. If he could start hitting a bit better and raise his average closer to .240 -- which is still well below his career .288 average -- his OBP would be much more respectable.

How he got here: Second-round draft pick in 2018 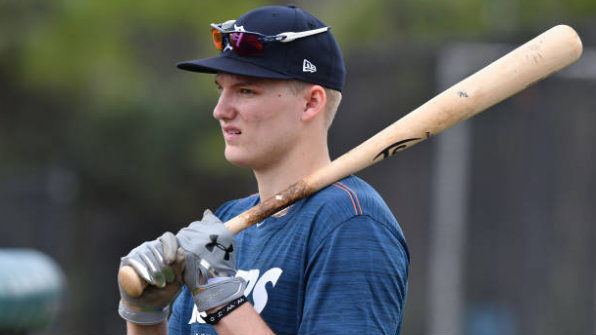 The Tigers took one of the most promising bats in the draft with pick No. 44 last year, and Meadows rewarded them with a strong 28 games in the lower levels.

This year, he's playing for West Michigan in the Midwest League, and strikeouts have been a major issue. Meadows has whiffed 56 times in the first 45 games while showing little power. His walk rate is still high, but he needs to put the ball in play more often to give himself a chance to use his speed.

Meadows is only 19 years old, so there's plenty of development in his future. The Tigers would love to see his bat heat up soon.

How he got here: International signing in July 2016

Perez is another case of a young player who hasn't grown into his offensive skills yet, and the Midwest League has been a tough test.

Perez is a defense-first shortstop with a rocket arm and good speed, but he's expected to be a very good contact hitter with the occasional power. So far, he's struck out once per game with a .196 batting average and only six extra-base hits in 43 contests.

Like Robson and Meadows, Perez is walking at a good rate, so his OBP only needs a batting average bump to look much stronger. 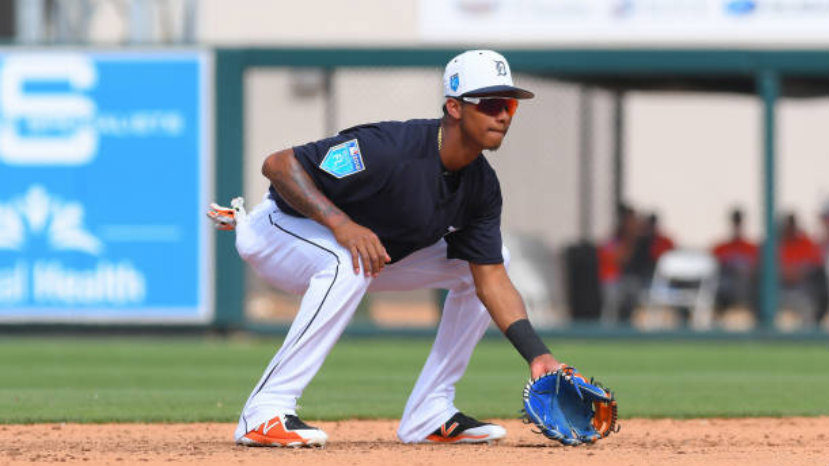 Alcantara is hitting better than Perez at the moment, but he has less offensive upside in his profile.

One of the three infielders acquired in the J.D. Martinez trade, Alcantara rose to the No. 14 prospect in the organization this offseason thanks to his defense. He only hit one home run and slugged .333 in 120 games with Double-A Erie, but his .271 average and .335 OBP were both respectable.

Alcantara received a 20 grade for power, so he's not going to hit many home runs. The Tigers hope he can be a .270 hitter with some doubles power to go with elite defense up the middle.